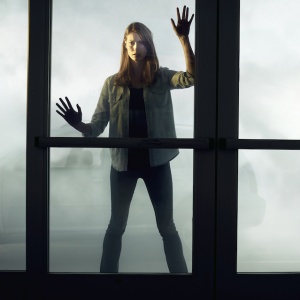 Stephen King is a franchise unto himself. No author has been more prolific, and many of his stories take place in the shared universe of Castle Rock. Many have also existed in both movie and television form, like The Shining and now It. Frank Darabont made The Mist into a movie, but Spike TV’s new series The Mist is not a remake.

Developed by Christian Torpe, The Mist is a modern day story in which multiple characters are trapped in different locations by a mist filled with monsters. Eve (Alyssa Sutherland) and her daughter Alex (Gus Birney) are stuck in the mall along with a jock who sexually assaulted Alex at a party. Sutherland spoke with my by phone last week to preview The Mist. Catch The Mist Thursdays at 10PM on Spike TV.

Franchise Fred: Is it nice to be in a modern day show after Vikings?

Alyssa Sutherland: It is, yeah, it is, absolutely. It’s refreshing. I was kind of starting to say that I was itching to be a lawyer or a cop or something. So I got a teacher. 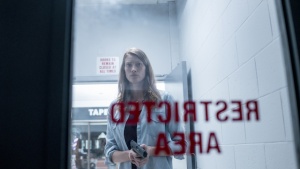 Franchise Fred: Were you a horror fan before The Mist came along?

Franchise Fred: Did shooting The Mist help you get over any of your fears?

Alyssa Sutherland: [Laughs] No. I mean, I’m seeing all of the behind the scenes stuff. I’m dealing with the nuts and bolts of what’s going on and how everything’s created. It’s a very different experience for me on set than it is for the viewer watching. There are a couple moments, like I thought a guy dressed up as a corpse was actually a dummy. He moved in between takes and I jumped at that. There are a couple moments like that but we’re reading the scripts so we know what’s going to happen. We know that that thing is going to jump out. The challenge is acting like you don’t know what’s going to happen and being surprised and shocked and scared when it does. 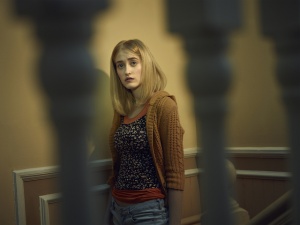 Franchise Fred: The mist is just setting in in the pilot, so what’s coming up for Eve and Alex?

Alyssa Sutherland: There’s a lot that they go through. That relationship was tested in the pilot and it continues to be tested throughout the season. It’s obviously Eve’s primary concern. It was my favorite thing to work on and to work with Gus who plays Alex, who’s just so lovely. She’s so talented and wonderful and adorable young woman. I think that’s really evident on screen. I think people will just fall in love with her. I totally fell in love with her very quickly. It was easy to me to love and want to protect her and be her mum.

Franchise Fred: It’s important that they’re talking about a sexual assault, and Eve never blames Alex, at least in the pilot. Does she maintain that throughout this crisis? 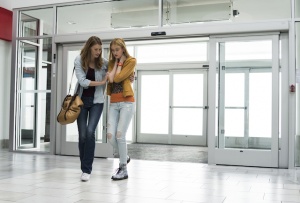 Alyssa Sutherland: Oh, yeah, absolutely. I think that comes from Eve’s past. Eve being a young mother and dealing with people shaming her for her own sexuality, I think she knows immediately how some people are going to view her daughter. Especially because it’s the star quarterback. When I read the pilot, the whole Stanford swimmer case was in the news. I just thought it was all so timely and a wonderful project to be a part of. I like that we’re talking about women’s issues. Not just women’s issues but LGBTQ issues. I am really proud to be a part of a project that’s pretty fearless.

Franchise Fred: Is Eve separated from her husband and son by the mist?

Alyssa Sutherland: I don’t want to spoil it for you.

Franchise Fred: Does The Mist give you freedom to create a brand new character since it’s a fresh, new take on The Mist?

Alyssa Sutherland: Yeah, it does. She’s not in the novella or the movie. It’s completely new and fresh. It’s exciting to be part of something from the beginning as well. It’s a new experience for me to be involved in the very beginning of something. It’s exciting, nerve wracking, lots of different things all together. Mostly just exciting. I’m excited to see how people react to it.

Franchise Fred: Is the American accent easy for you?

Alyssa Sutherland: I have some days when it’s easy, some days when it’s not. I stayed in the American accent for the entire filming. I mean, I didn’t break it once. Not until I think right at the end of filming did I swap back into my Australian accent. I lived in it 24/7 because I just felt like I had to. I wanted it to be as natural as possible filming but still feel like I was myself and be realistic in that emotion. An accent makes you feel a little altered somehow, so I stayed in it for four months. 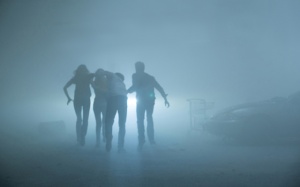 Franchise Fred: When you encounter the creatures in the mist, is that practical on set?

Alyssa Sutherland: [Some of it] happened in post. We had to imagine that. Some is done with special effects and then some is done after in visual effects. It just depends on what it is they’re trying to create. We had prosthetics and blood and gore for some things and others were added in afterwards. We were told kind of how it would look but we had to imagine it.

Franchise Fred: The people inside the mall are just as horrifying as the creatures in the mist. Are there other people who will be problems for Eve and Alex? 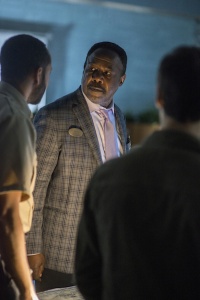 Alyssa Sutherland: Oh, for sure. Absolutely. That starts happening in the second and third episode. You start meeting the people who are also trapped int the mall. It goes beyond Jay Heisel. Isiah Whitlock, Jr. plays the manager of the mall. I’m not going to tell you much about his character. I think that would really be for him to do. He’s conflicted and has his own set of contradictions. You’ll start seeing the dynamic between all of these characters who are left there. Then things that happen to them really affect how people interact with one another as well.

Franchise Fred: Are you shooting in a functioning mall or a complete set?

Franchise Fred: Oh, it wasn’t even after business hours?

Alyssa Sutherland: Sometimes it was during business hours. Sometimes it was at night. It just depended on what kind of scenes we were filming that day. I think people were cool about it but yeah, we were shooting in a live mall so that had its own challenges.

Franchise Fred: Would you ever go browse and shop on a break?

Alyssa Sutherland: No. I would do my grocery shopping though. It wasn’t the most equipped mall. There weren’t that many stores in there. It was fairly small. Production did a really great job of making it look much bigger and more extensive than what it actually was. I would certainly get my grocery shopping done.

Stephen King is a franchise unto himself. No author has been more prolific, and many of his stories take place in the shared universe of Castle Rock. Many have also existed in both movie and television form, like The Shining and now It....
0
Average User Rating
0 votes
Please sign in to rate.