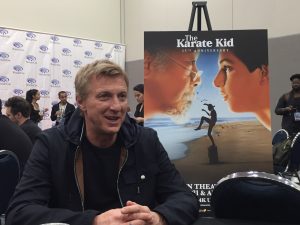 The long awaited second season of Cobra Kai is finally here and William Zabka really gets to shine in it. Season one gave us more Johnny Lawrence than a movie ever could by making him a main character for 10 episodes. Now we’re just as invested in Johnny’s desire to redeem Cobra Kai as we are to catching up with Daniel LaRusso (Ralph Macchio).

The return of John Kreese (Martin Kove) gives Johnny a lot of new problems as he’s trying to teach his students better values than sweeping the leg and showing no mercy. Plus he’s hoping to reconnect with his son Robbie (Tanner Buchanan). Franchise Fred was in a roundtable with Zabka at WonderCon last month and you can watch season two now on YouTube Premium.

Q: How does it feel to continue the story in season 2? 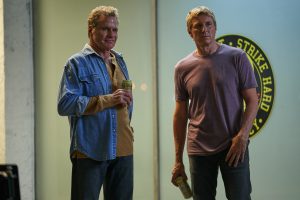 William Zabka: It’s awesome. When they came and approached my for Cobra Kai season one, my mind was really blown at the idea of rebirthing Johnny Lawrence today. So the whole ideas of even doing it was very cathartic and it took a lot of time for me to process it and accept the fact that I was going to do this. But they wrote it right and it was a lot of fun, very challenging to get into the character of Johnny, especially the way they wrote him today, being a degenerate and drinking his beer and isolating him in his apartment. He’s not the Johnny I would have imagined being today .Maybe he was a doctor or running some camp somewhere. So they took his legs out but they kind of made him an underdog in a way. I love that .I love that Johnny has a chance to intervene in this child’s life and form a bond and goes ahead and opens up Cobra Kai, which I said at the beginning and is really happening now in season two is by opening Cobra Kai again, Johnny’s opening up Pandora’s box. This is the snake that bit him. This is his past. His intentions are to do it right and to change things, so at the end of the first season, you see that he led his calvary to victory, but he’s in a conflict because they used tactics on his own son that he suddenly doesn’t agree with. Enter sensei Kreese into his world, the man that taught him everything about this. Now he has his father figure, sensei, mentor stepping back into his life which complicates things even more. So I love telling the story of Johnny. I love going deep with him and seeing his backstory and he’s stuck in his past in many ways and that’s a lot of fun. It’s a thrilling time to play him in this modern day. 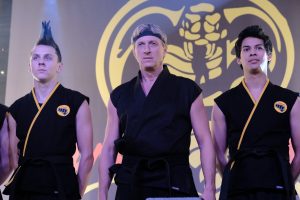 Q: How will his relationship with his son develop in season two?

William Zabka: The heart of Johnny, when I read the script and when I heard the story is his son and the fact that he’s estranged from his son and he feels like he failed him. So, he’s still throwing the lifeline out to his son, hopefully to earn a spot back in his life but Robbie, his son, has a lot of right to not trust that because Johnny wasn’t there. So when somebody comes back in your life when you’re 16, 17, 18 years old, says, “I want to be your dad now,” it’s not easy for him to accept that. So there’s a lot of conflict and expression since Robbie’s been taken under the wing of his arch enemy, Daniel LaRusso. That doesn’t make things very easy for Johnny. 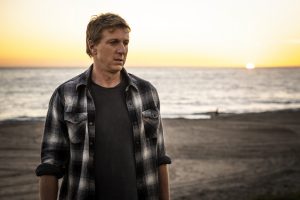 FF: Has Cobra Kai allowed you to explore a lot more dramatic territory than a 2 hour movie?

William Zabka: Yeah, a lot more. Like you said, in the movie, you have two hours to button it all up, and in the Karate Kid formula, there’s a victory at the end. You feel good and the bad guy’s down. In a show like this, it can go on and on. It’s longform and we can really explore many levels and depths. So I love what they’re writing to, my strengths, my action and my comedy, and in the drama. It’s really a great buffet of writing they do for me which I’m very thankful for.

FF: What’s been the most challenging dramatic moment?

William Zabka: There are a few scenes in season two that were particularly difficult to play, because I feel Johnny in my blood. My instincts as Billy would take thing in a different direction. Johnny’s different so he would go in a different way. I’m like oh man, I would maybe not do that or say that but because he’s boxed into this situation, it compresses your emotions and your feelings. You live that so I experienced some real emotion doing the show that’s taken a while to actually come home and detach from this character. 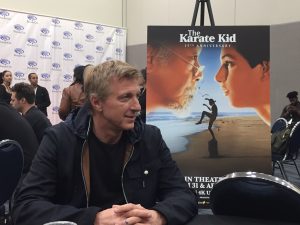 Q: Has redeeming Johnny changed fans’ reaction to you?

William Zabka: Yeah, of course. The Karate Kid fans I’ve gotten all my life, “I hated you! You’re the biggest asshole!” Then there was guys, always the yahoos on my side, they were like, “Cobra Kai, dude. You should’ve killed him anyway.” No, you kind of missed the point of the movie. I imagine from the outside, it might be like your high school bully, running into him 30 years later and seeing that he’s having a tough time and actually not that bad a guy and now you’ve grown up and you realize maybe he wasn’t all bad. I think getting to know Johnny in a way has been kind of therapy in a way. I don’t have to be afraid of this guy. I don’t have to hate him. He’s not perfect for sure. He’s working out his inner demons in front of everybody but the response to the character has been very favorable. I hear a lot of young adults, men mostly who can relate to him. They’re trying to make it work in their apartments eating baloney, drinking beer and trying to figure out what went wrong. To see Johnny trying to do something right, there’s something about that and living vicariously through a character that can actually inspire you in real life. I’ve heard a number of those stories of guys who say, “Hey man, that’s me, man, that’s me.” And I love hearing that. 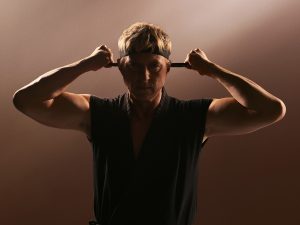 William Zabka: Yeah, very much so. Any interview I ever did since then ‘til now, I never ever saw him as the bad guy. He was the antagonist in the film and he was the villain in a sense but the only way that I was able to play him and for him to fit so well on me was the two parts in the script that I held onto, which was the first one when he says, “I’m an ex-degenerate” and the second one when he hands Daniel the trophy after Kreese says sweep the leg. When I read those two parts in the script, I’m like oh, so he’s not just all bad. At the end of the movie if Daniel would’ve kicked him in the face and Johnny would’ve come at him with a baseball bat, then he’s unredeemable. I saw, oh, okay, he’s got a conscience. Because of that, I was able to play all the other colors. So I always saw him through his own story. He was justified almost in everything he did because he was trained a certain way to respond a certain way. Here’s, from his point of view, a stranger coming in from out of town, gets in his business, takes his girlfriend and then takes his title. I mean, he wipes out his identity so to me, that was that story but it was the story, for me, as the actor and you have to always have your story. In the big picture, for me the story was a story of a kid waking up a little bit and that crane kick actually liberated Johnny Lawrence and set him free. But then all his foundation for 18 years, all his training and everything goes out the window and now what do you have? You can’t reach back to that so he’s been a lost kind of soul for this many years and now he’s finally getting to the point where he’s going to try and make some changes and grow up. I think there’s something about that that people relate to. 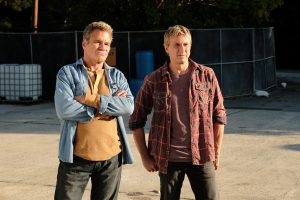 FF: If Johnny had had a Mr. Miyagi, do you think he would have turned out differently?

William Zabka: Oh yeah, I always say that. Ralph and I joke about that all the time. If Johnny would have stumbled into the South Seas Apartments and made a bonsai tree, he would’ve turned into Daniel LaRusso. And if Johnny wasn’t at Cobra Kai the day he peeked his little head in there, Daniel was this close to getting into the clutches of Kreese. So it could’ve gone either way and we could have a whole different story but that’s like life. You’re affected by who you run into, who takes over your life, who you give power to.