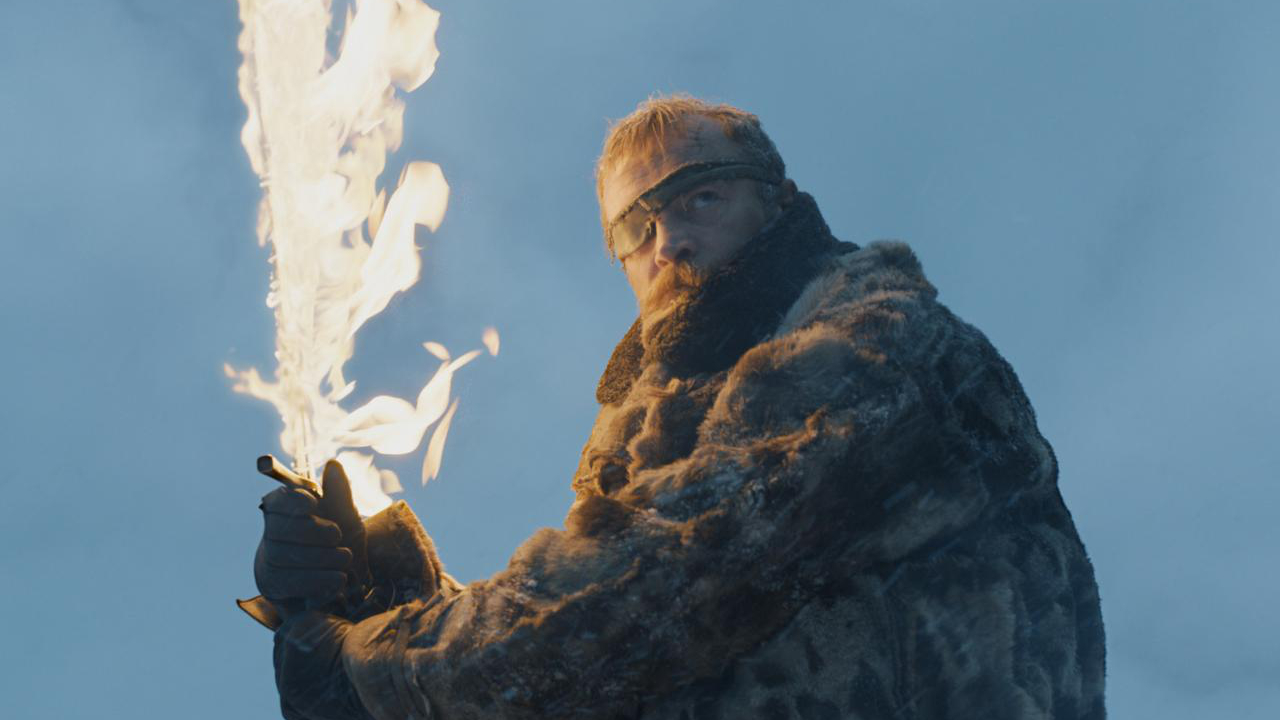 The penultimate episode to most Game of Thrones seasons is typically the big one. Last year we had Bastard Bowl 2016. Season 3 of course came to a head with the infamous Red Wedding. Season 7 is no different as hinted last week in Eastwatch. We’re going beyond the wall this week as the “Magnificent Seven of Westeros” go head-to-head with some White Walkers.

Like Bastard Bowl 2016 last year, Beyond the Wall spends the majority of its lengthy run time with the main event. However, through the episode, we do have to pay a visit elsewhere – mainly the Winterfell plot. After finding the planted letter last week, Arya (Maisie Williams) confronts Sansa (Sophie Turner) about the contents. There’s plenty o the first season dragged up. Arya accuses Sansa of doing nothing at Ned’s execution and vice-versa. Given the circumstances, there’s nothing neither one of them could have done.

Since Arya’s return a few episode ago, this isn’t what I expected for the Stark girls reunion. Even throwing Bran into the mix (who’s missing this episode), it’s been just an uneasy subplot to say the least. That’s not to say that it’s bad or anything or forced. As much as I love Littlefinger (Aidan Gillen) as a character, it’s been intriguing to see his scheming be resorted to desperation. Sansa still trusts him…ish. But after what he’s pulled over the years (the whole Ramsay incident), just why? Where’s that black dress apprentice Sansa from the fourth season?

Everything comes to a head in Winterfell when Arya and Sansa clash again. Sansa finds Arya’s faces from Braavos and has no idea what to make of it. Arya brings back the Game of Faces from the House of Black and White. Remember that old bit? Lie! Smack! Lie! Smack! Lie! It’s not as great as the showdown between Arya and the Waif, but is serviceable in tying old plot points. Arya says she could even take her face if she wants to, but does nothing. Expect this whole sibling distrust to be resolved in the next episode. With only seven episodes left, the main plot will be the overall focus.

Of course we also get to visit Dragonstone in Beyond the Wall.  Like the Winterfell sub-plot, Dany’s (Emilia Clarke) at her home base is spread throughout the episode. As usual by now, Tyrion (Peter Dinklage) acts as the voice of reason. Though this time, he begins to speak about who will succeed Dany on the Iron Throne. That’s if it ever happens. She’s more focused on the now than her own demise. Tyrion’s certainly putting the cart before the horse. If anything, this is more foreshadowing to the Jon being a Targaryen reveal. Maybe it won’t be based on family. It’s way too early to tell or even care about. It’s still all concentrated on the war beyond the wall.

We’re going to go later in the episode when things go bad beyond the wall. Spoiler alert since we’re not going in chronological order here. Dany decides to get involved in the battle and take Drogon, Rhaegal and Viserion with her as backup.

Everything else from the episode stems from Jon (Kit Harington) and the rest of the “Magnificent Seven of Westeros” in search of a wight. As we learned last week, this whole mission is simply to bring a wight to King’s Landing and convince Cersei (Lena Headey) to join the fight. Like Bran, Cersei’s completely absent from the episode. So you’re left forgetting what scheme she’s concocting next against Team Dany.

A good portion of the episode is the seven just talking about the past. Remember, many of these characters had bad dealings with other member of the group. Gendry (Joe Dempsie) was betrayed by the Brotherhood Without Banners and served up to Melisandre. Jon recollect his time with Jorah’s (Iain Glen) father as they discuss who Longclaw truly belongs to. And Tormund (Kristofer Hivju) and the Hound (Rory McCann) both end up bringing up their thoughts on Brienne. Tormund’s smitten with her, while the foul-mouthed Hound would rather “see her next Tuesday.”

As they continue northwards, there’s a wight polar bear attacking them. Well, mainly Thoros (Paul Kaye), who needs his wounds cauterized. I thought that would have been the end of him, but he can last a few minutes in the episode. He does end up dying right before the big battle. Beric (Richard Dormer) better watch out now that he’s on his final life. Bring Melisandre back into the picture and it might not be too bad.

Eventually, Jon and crew trapped on a giant lake with a rock in the middle. Wights are surrounding them. It’s basically the supernatural version of Bastard Bowl 2016, though not as raw. Perhaps it’s just the fantasy element in play, but it didn’t have the emotional punch that the Battle of the Bastards did a year ago. Insurmountable odds aside, there’s plenty of predictability. Obviously Jon’s not dying and I can say the same about a few other characters. But then we kick in the Dany ex-machina with her dragons. Even that arrive pales in comparison to the Knights of the Vale’s arrival.

And while Dany’s kicking ass, the Night King does the unthinkable. Viserion get taken down with an ice spear. Here’s where it get controversial. Emilia Clarke is more than reserved when her “child” gets killed. Even Jon gets more upset over a creature he hardly knows. On the plus side, the Night King could more than qualify for the javelin team at the Westerosi Olympics.

Team Dany escapes minus Jon, who’s rescued by Uncle Benjen (Joseph Mawle) out of the blue. Where’d he come from? So many questions unanswered. But Beyond the Wall is more focused on getting to the finish line, just like the entire season. The pace of the seventh season in general has been on overdrive. Regardless, Jon gets to safety and ends up on Dany’s boat. She’s all-in in fighting the Night King and Jon finally “bends the knee.” Back at the aftermath of the battle, the Night King has Viserion brought out of the water and turned into a wight. Things are about to get real. And that wall’s probably coming down now.

Beyond the Wall delivers the goods of a penultimate episode. At the same time, the climax doesn’t feel earned as the season’s track has been laid down way too fast. Maybe next week, we’ll get some closure with Euron, Theon, Ellaria and Sam’s arcs which have been hit and miss all season.