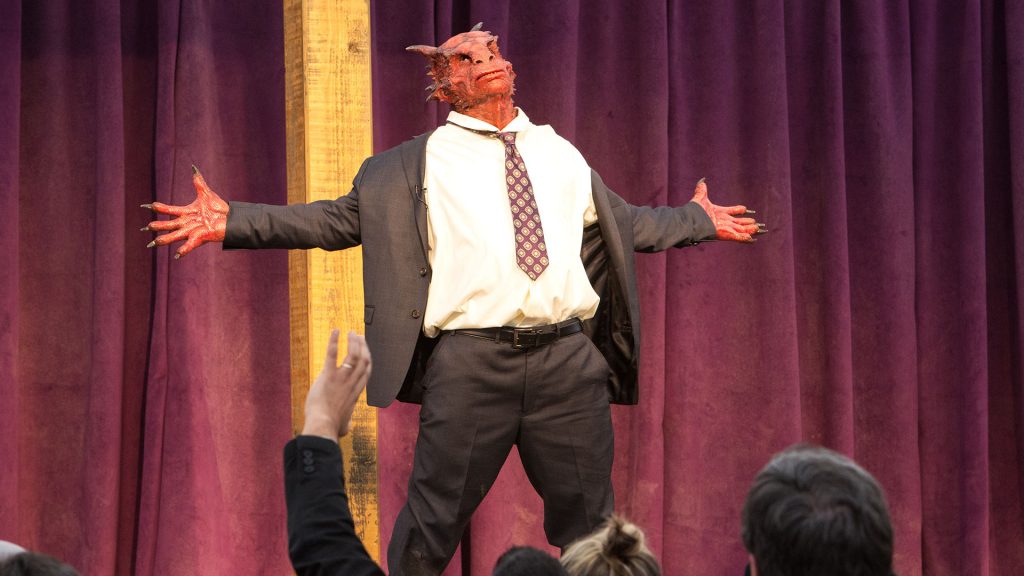 Finally we get some development on the magic stick. Again, please give us a new name Grimm writers. I feel really stupid referring to it as the stick. Monroe get a call from Dr. Ian Krieger to give him more information about the cloth that the stick was wrapped in. Monroe arranges to have the stick dropped off so that the doctor can analyze it. After the phone call is over, the shop bell rings and it is Eve who tells the gang that she can change into Renard and is going to do that to see what she can find out from Rachel.

Our main story for the episode centers around Dwight Eleazar, a pastor who acts as he is possessed by Satan but he is really a Furis Rubian. Meanwhile during one of his performances, a young man named Benjamin is taking a video on his phone. This isn’t allowed so the body guard named Luke follows after him. There is a scuffle and Luke falls to the ground, cracking his head on the ground and dying. Wu, Nick and Hank meet at the tent where the pastor gives his sermons to ask about the altercation.

Meanwhile, Benjamin heads back to Joan Vark, a leader of another church who is determined to save Dwight from the devil inside. After the debate, he speaks with Rachel and Jeremiah. Renard says he was way too nice during the debate. 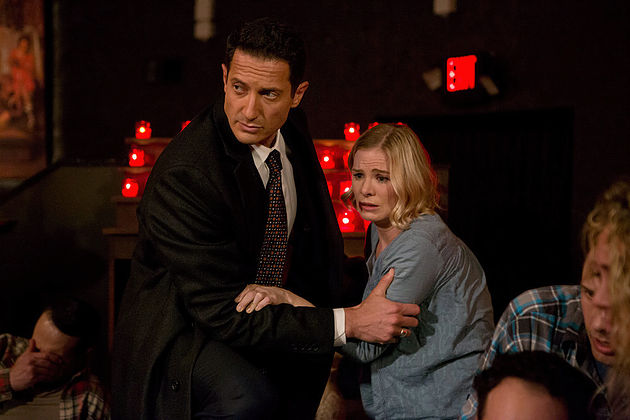 While Nick, Hank and Wu are busy investigating, there is a mayoral debate between Renard and his opponent Steven Gallagher. Adalind is watching when Nick arrives home. Adalind asks Nick if Renard knows where they live and he responds no and that he doesn’t always trust Renard. Adalind asks if Nick can look into where Diana may be and he says he will try.

Hank comes to the precinct while Nick is looking for information on Diana but is having trouble because there is no birth certificate, or social security number. Wu interrupts saying they’ve found the car the fled the scene where Luke was killed. It brings them to the church where Benjamin is being given money to arrange the murder of Dwight. They arrest Benjamin and take him back to the precinct where Mark, a body guard of Dwight’s picks him out of a line up. While running background checks, Wu discovers that Dwight and Joan were married. Wu has a pain in his neck and Nick asks if he is okay, and Wu says he’s fine.

In interrogation, Benjamin says they are trying to save Dwight. They see the video of him woging and bring it to Monroe and Rosalee who confirm he is a Wesen named Furis Rubians. This is when Monroe, Nick, Hank and Rosalee decide they need to see a show. Peter, one of the other bodyguards meets Joan and is bribed to give Dwight to the other church. As Nick and Hank go to Dwight’s trailer, where they confront him for woging. He says that he doesn’t know what they’re talking about and is just helping people. 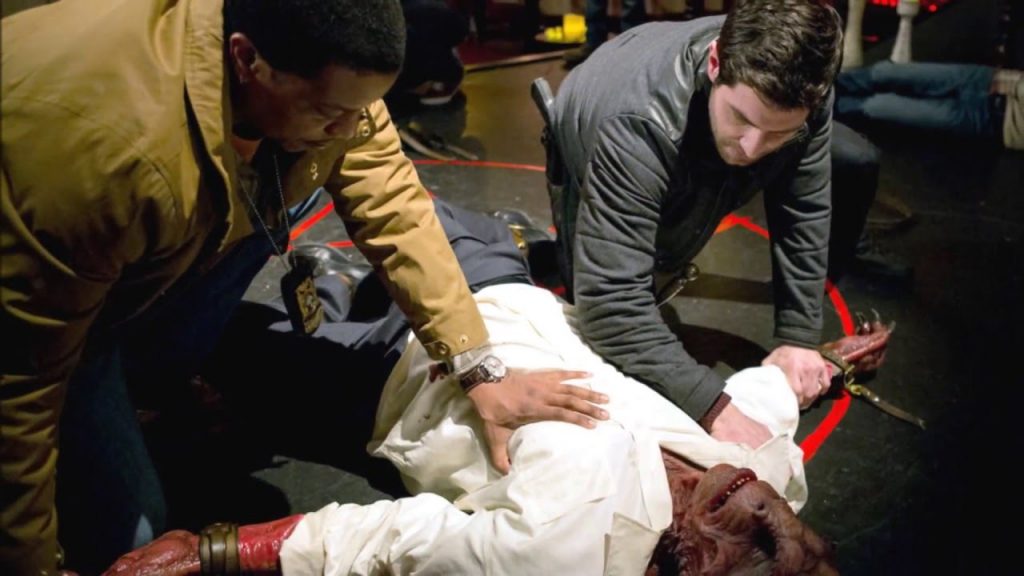 Meanwhile, Eve uses the witch’s hat to turn into Renard. She tells Nick to keep Renard with them so she can walk freely as him knowing where he is. Eve as Renard invites Rachel to Renard’s house and there proceeds to be an awkward sexual advance.

Mark then goes to Dwight’s trailer to tell him that he needs to ask for his forgiveness for what he’s about to do. Dwight gets knocked out and is taken by the men to Joan’s church. While researching, Wu discovers that Dwight was unfaithful to Joan and blamed it on the devil. In Joan’s church, they prepare to get the devil out of Dwight. He is chained up on the floor and begging for his life. The group heats up iron pokers in a fire to get Dwight. Dwight breaks free and gets stabbed by a poker. Nick, Hank and Renard arrive and tackle them to the ground, but it is too late, Dwight has died but with his last words, tells Joan that she has saved him.

Finally, the gang meets with Dr. Ian Krieger about the writing on the cloth that came with the stick. They figure out that it is Aramaic and some form of Latin. The thermal testing shows that there is an outline of the stick. Back at the shop, they try to translate the words on the cloth. They can figure out a few words: miraculum or miracle, and periculosum or hazardous, perilous, threatening.

At least in this episode they have advanced the stick story even further, but again, I’m begging for a new name for the stick! I’m very interested to see why the stick has a warning with it. What does it do that is so dangerous? On another note, where has Trubel been? When will they bring her back? Will they tell her about the stick?

Grimm “The Believer” Review Finally we get some development on the magic stick. Again, please give us a new name Grimm writers. I feel really stupid referring to it as the stick. Monroe get a call from Dr. Ian Krieger to give him more ...
0
Average User Rating
0 votes
Please sign in to rate.