David Rasche has been in everything. At least it feels that way. Every time you see him in something, he may look familiar, but if you grew up watching Sledge Hammer in the ‘80s you’ll always recognize him as Sledge.

Impastor gives Rasche a new weekly role as Alden Schmidt, the minister who’s skeptical of Buddy Dobbs (Michael Rosenbaum) but has enough problems of his own to keep him distracted. New episodes of Impastor air Wednesdays at 10:30 on TV Land and I got to speak with Rasche by phone about his role and his storied career. 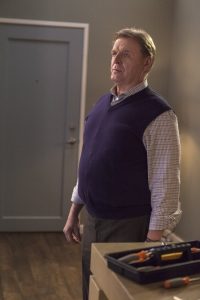 Do you feel like every line you have on Impastor is a zinger?

David Rasche: I am very grateful to the dear writers for being so nice to me. Let’s just put it that way. hey really do, and every script I look at it and it’s got this and that, but they always give me something really fun to do so I’m grateful to them.

Do they try multiple alternate lines for each one?

David Rasche: That happens once in a while. Now that you bring it up, Chris Vane who started the whole thing, he wrote the pilot and he’s head writer and creator, he’s on the set all the time. So sometimes he will say, “Hey, why don’t you say something different?” But they spend so much time on these scripts. We shoot in March/April and they start in August writing. So these scripts have been gone over with a fine tooth comb, just over and over and over and over. So when they get there, they’re pretty assured that what they have is what they want. They’ve very careful. They’re on time. We never have to wait. You hear stories about people standing on the set waiting because they don’t have anything to shoot. Have you heard about that? Ours isn’t like that. These guys are really, really great and they work really, really hard. It’s good for us because it gives everybody a chance to see what you have. You do a read through. Sometimes you do read throughs in January/February and they would have a month or two to work on them, to listen to the read through, take your notes and make some decisions and do whatever rewrites they needed to make so they weren’t screaming for a deadline at the end. We’re lucky that way. We get prep time. It’s not so much on the fly.

If viewers were hoping that Alden would leave his wife, this is a big season for him, isn’t it?

David Rasche: It’s a very big season. Poor, poor deluded Alden. He thinks he’s got all his ducks in a row and it doesn’t seem like it’s going to work out that way. Other people have other plans for him. I think he’s blissfully happy now but I’m not sure that that will always be the case, right?

How did you like singing “Rhinestone Cowboy” at karaoke?

David Rasche: That was fun. What was really interesting, the guy who wrote it, was kicking around. He did it on an album and somebody heard it on the radio and went to Glenn Campbell and said, “You’ve got to sing this song.” So I thought that was interesting to see how songs are written and they end up going to [the artist]. It was a lot of fun and of course Mike Kosinski is a very, very clever guy. You see what he does as an actor because he has the lines, but he was a graduate of Second City in Chicago and he’s a very, very clever and very fast. Sometimes, although not frequently, of all people they’ll just say, “Go ahead, Michael, do something” and let him go. He was awful fun to work with, to work out that whole thing. Our director’s name is Fred [Goss], was also very helpful. He’s a lovely guy and very helpful in making that whole thing happen.

You’ve always been a character and I feel like whenever you show up, people recognize you, usually from Sledge Hammer. Are you getting recognized more for Impastor now?

David Rasche: I’d say probably the thing I’m most recognized for is, yes, Impastor and yes, Sledge Hammer but also Burn After Reading, the Coen Brothers movie. I get a lot of recognition from that. Also from Veep because a lot of people see Veep. I would say at this point those are the main ones.

I’m sure I haven’t seen every role you’ve played. Had you ever played a minister or someone in the church before?

David Rasche: The funny thing is I haven’t. One time, long ago, a short film you would have never seen. It never saw the light of day. But my dad is a minister and my whole family are ministers. So I come from the church. My grandpa was a minister and my great grandpa was a minister and all my uncles were ministers. My grandma was the daughter of a minister. So I know all about church. When we would get to something that took place in the church, I really wanted to say, “Hey, that’s not how it goes. You’ve got to do it this way. Hey, how come we’re not doing this? How come I’m not doing that?” I’m the one who kind of rides on production to make sure everything is proper church-wise. 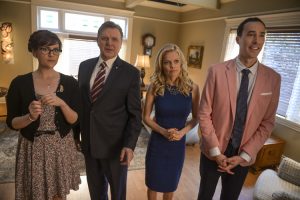 You’ve also done a lot of dramas. Is it nice to be in a comedy again, or two with Impastor and Veep?

It’s always fun to see you show up in whatever character you get to play, but do you ever go out for leads or do people ever develop lead roles for you?

David Rasche: Well, I have in the theater probably more. Generally, you know, the lead is a difficult spot to get. You’ve got a long list of people waiting in line for that spot. When you’ve got guys like John Goodman running around, it’s pretty tough to get on there. Also, if you notice, a lot of the names my age have been people who have been on wildly successful shows like Cheers or something like that. I’ve been very happy with the stuff that I’ve been in and very grateful to be able to do the stuff that I’ve been able to do.

Of course I revealed I was a Sledge Hammer fan.

Do you think Sledge and Doreau ended up together?

David Rasche: You know, I just saw her. What a lovely actress. She was just perfect, wasn’t she? We just had the 35th anniversary of Sledge Hammer and I hadn’t seen Anne-Marie [Martin] in 30 years. She’s still as beautiful as she is and ever was. She was just absolutely the perfect sidekick, the perfect female cop comic sidekick. You couldn’t have asked for more so I’m very indebted, very grateful to have had her to work with all those years. I had a great time doing that.

Alan Spencer won’t say if they ended up together either so I guess it’s a great mystery?

David Rasche: Well, he should know. He’s the guy who would know.

Sledge Hammer came out on DVD over 10 years ago. Now do people still discover it on streaming?

David Rasche: You know, they are and you reminded me. My son told me, “Why don’t you get Sledge Hammer on Netflix.” I don’t think it is. I wonder why. Knowing Alan, he tried but I think I’ll send him an e-mail, see what’s going on with that.

I also remember you in the movie Delirious where you got to spoof soap operas. Since you’d done real soap operas, was it fun to spoof them?

David Rasche: That’s true. That was really fun. Working with John Candy can’t be all bad. Such a generous, funny guy. I love my part, a crazy doctor. I’d always had a hope that that movie would’ve gotten more attention than it did because I thought it was really good. I was hoping for more, that it would get more attention. That was a great part to play, great movie to do.

Do you have any other movies or shows that you’d hoped got more attention?

David Rasche: Well, let’s see. I did this movie called In the Loop. Did you ever hear of that?

Yes, from the creator of Veep.

David Rasche: That’s right. Half of my friends, half of the people I know think it was one of the funniest movies they’ve ever seen. And the other half have never heard of it. So that is one I have to say. There was another one called An Innocent Man which I thought was a really good movie. Peer Yates directed it with Tom Selleck.

I saw that on video at least.

David Rasche: It was a really, really good movie, well made. What happened was, it was a prison movie and Sylvester Stallone opened a prison movie, Lockup, a month before. So we kind of got the sunshine taken away from us. I think it was a much, much better movie than Lockup and one of the best movies, I’d say the best movie Tom Selleck ever made. He was really good in that.

You were the bad guy in An Innocent Man.

David Rasche: I was the bad guy, I was. That’s one I wish had gotten a little bit more attention.

Is it equally fun to you to play a really mean bad guy like that or a really funny, clueless innocent guy like Alden Schmidt on Impastor?

David Rasche: [Laughs] I would say they are equally fun to do because they are just something a little bit out of the ordinary. That’s one thing I’ve been spared is that I haven’t had to play a lot of young fathers and vanilla roles. I’ve been very, very fortunate to be able to have played roles that are a little quirky, like in In the Loop, in An Innocent Man, even in Delirious. They were all a little bit off. It’s fun playing those roles. They’re different. You use a different side of yourself but on An Innocent Man I got to work with Peter Yates who was a great, great director. That was a real pleasure, a real honor to be able to work with him.

Is there anything else we should look for you in after Impastor?

David Rasche: Well, I don’t know. Not right now. There’s a possibility, I did a play over the summer that may go to Broadway and I may go with it, but I don’t know. I don’t know whether it’s going to go or whether I’m going to go but I hope so. It’s a wonderful play called Junk. It was at La Jolla Playhouse. It’s about Mike Milken the junk bond king. Back in the ‘80s, he was this big financial guy that ended up in jail. That’s what’s on the horizon right now and I can’t really do very much. I’m limited in what I can do because we’re premiering now so end of September, my guess is by end of October we may very well know whether or not we’re going to be picked up. If we get picked up, I really can’t do much because I’m tied to the show.

I hope so. That’s a good problem to have.

David Rasche: It is and I’m very grateful for that too. 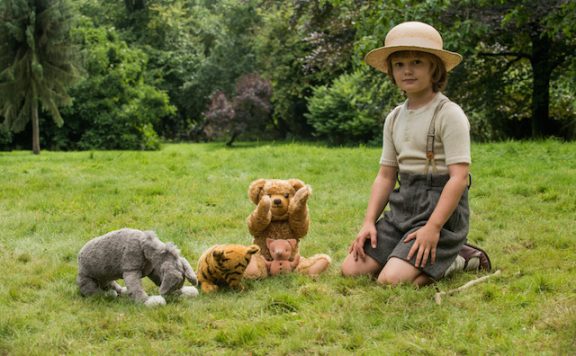 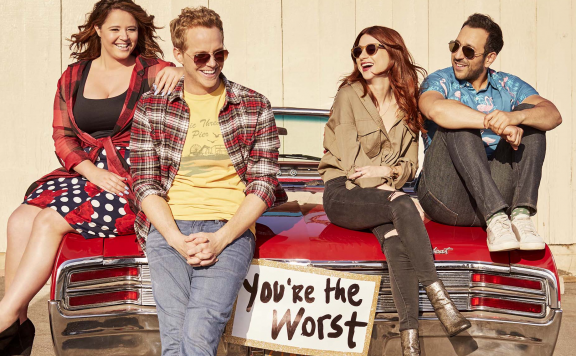 David Rasche has been in everything. At least it feels that way. Every time you see him in something, he may look familiar, but if you grew up watching Sledge Hammer in the ‘80s you’ll always recognize him as Sledge. Impastor gives Rasche...
0
Average User Rating
0 votes
Please sign in to rate.