Impastor season two began airing last week and we’ve got interviews with the cast. Mircea Monroe plays Alexa Cummings, the church treasurer with a secret past of her own, although the hijinx of Buddy Dobbs (Michael Rosenbaum) are often far more outrageous than Alexa’s own bank robbing runaway past.

We spoke with Monroe by phone about the new season. I’ve frequently seen Monroe at Television Critics Association events for Episodes or even way back on the short-lived Fox series Drive, so it was nice to catch up. Impastor airs Tuesday nights at 10:30 on TV Land.

How was the season premiere of Impastor for you? Did you get good feedback?

Mircea Monroe: Yeah, we got great feedback which is so nice. We spent a week in New York doing stuff to promote it. Now that it’s aired, it was so great that so many people were into it. I’s a nice feeling.

Is Impastor a different style of comedy than Episodes?

Mircea Monroe: I think they’re totally different because Impastor has murder and all of these elements as opposed to Episodes which is just a comedy.

Is Alexa more reactive to the things around here, where Morning Randolph was a comedic character in a lot of scenes?

Mircea Monroe: That’s so interesting. I also think Morning is so much older, she’s been there, done that. They’re such different worlds it makes my brain explode to compare them. I think Alexa’s a lot more serious. That’s not true. Morning kind of is too. I can’t compare them or have them in the same room in my headspace. They’re so different.

We’ve spoken for a lot of different shows you’ve been on. Has Impastor been a really good fit for you?

Mircea Monroe: Oh, it’s been so wonderful for so many reasons, one of which it’s just really fun to be on. It’s just a lovely show to do and to be on. The energy of the set is really lovely and free and fun. Some of my closest friends are my classmates which makes it amazing. As far as playing Alexa, she has such an interesting layered past and it’s really fun to play.

Who from the cast of Impastor do you hang out with after? 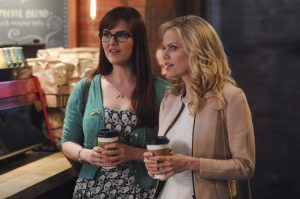 You said Alexa is a serious character. Do you feel you have to be the straight man to a lot of the wacky comedy going on?

Mircea Monroe: I guess serious in that the situations that she’s in are kind of dire having been with terrible men or having her life in danger and things like that. The stakes are a lot higher, but I do feel like I get to have and be around a lot of humor and still do things that are fun and funny.

Is Alexa really trying to hold things together the more they spiral out of control?

Mircea Monroe: Yeah, she’s a survivor, right? So she’s determined to be okay and figure things out and make them work and will absolutely make sure that happens, no matter what she has to do in order to make sure she’s number one, that she’s okay.

What else is coming up for Alexa on Impastor?

Mircea Monroe: I don’t know how the show ends. We shot a couple different endings and I don’t want to know. Chris [Vane] our creator, we were talking about and I was like, “I want to watch it and find out the same as everyone else.” Because we shot it a couple different ways. I’ve told everyone not to tell me just because it’s exciting and I feel like I’m a viewer.

So it’s really a cliffhanger.

Are there any scenes on Impastor where you have trouble keeping a straight face because what’s going on is so crazy?

Mircea Monroe: Yes. Constantly. I think because we’re all such good friends and Michael is such a prankster. We will laugh right up until we’ll be rolling, and still laughing. We’ll always focus and be professional but it is really hard. It’s so fun, you just want to keep laughing. You don’t want to have to stop.

How soon did the cast of Impastor become so close?

Mircea Monroe: I think it was pretty immediate. Especially, we shoot in Vancouver and when you’re on location, we’re kind of all we have. It forces a connection but we just also happen to really love each other, so when we’re in Vancouver, we would have dinner every single night together that we weren’t working. We spend every single weekend together and we all live two blocks from each other purposely so we can walk to each other’s apartments. It was such a nice community feel and a really special experience to have that which I think sometimes you miss when you’re shooting at home. You get home to your life that you already have.

So it was right from the pilot?

Mircea Monroe: Oh, immediately. Our first table read, we all went out to lunch. I think it was really clear. It was where you felt like you could take a deep breath. “Oh, this is a great group. It’s all going to be okay.” Because you don’t know. You start a job, you could be with these people for, who knows, seven, eight, 10 years God willing. You don’t know who you’re working with and it was such a massive relief and also very exciting and inspiring to have such quality human beings on the show. And great actors. They’re all really good actors.

Have you had any experience in the church in real life? 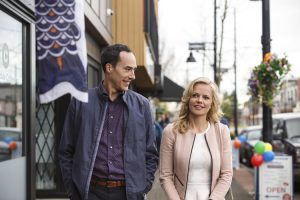 Mircea Monroe: That’s a great question. I’ve gone to church with friends when I was younger. That’s sort of the extent of it. I was raised more Buddhist so there’s a lot of chanting and things like that. I would say I’ve been exposed to it through friends. Also, my name Mircea comes from a guy who was a philosopher of religion, so I’ve read all of his work which has a lot to do with all sorts of religions. I wasn’t a part of the church consistently.

What was the philosopher’s name?

Mircea Monroe: Mircea Eliade, a Romanian philosopher of religion. He was my dad’s professor.

What else should we look for you in after Impastor?

Mircea Monroe: We’re kind of waiting to see, now that it just started airing, hopefully we’ll go again. A lot of it depends on that. In the meantime, we just recently got back from doing Episodes so I’m just taking a deep breath and seeing my friends and going for walks, having dinner, making dinner with people I love. It’s pretty great.

Was it crazy to fit a season of Episodes in between Impastor?

Mircea Monroe: Yeah, Impastor was Vancouver and Episodes was London. There was one where I shot and then took a redeye and went right to set. So it was nuts but you’re so high on adrenaline. Both shows are so exciting to be on that you’re so inspired that you feel awake.

Is it a nice feeling to be on shows that make people laugh?

Mircea Monroe: Oh yeah. It’s been a pretty incredible few years with these shows, doing comedy and having them be received so well. Just knowing that you’re Mircea Monroe:making people laugh is such a joy and it feels so good.

Impastor season two began airing last week and we’ve got interviews with the cast. Mircea Monroe plays Alexa Cummings, the church treasurer with a secret past of her own, although the hijinx of Buddy Dobbs (Michael Rosenbaum) are often far ...
0
Average User Rating
0 votes
Please sign in to rate.