The Leftovers S3 E1 Review: The Book of Kevin

The wait is finally over! The highly anticipated final season of The Leftovers has started, and I couldn’t be more excited to talk about The Book of Kevin. The Leftovers is a show that has one of the biggest cult followings of recent memory. A show about 2% of the world’s population vanishing from the earth (or departing, as the show calls it) with no rhyme or reason behind it. It’s a series that is depressing as it is captivating, with a bevy of powerhouse performance and beautifully crafted storytelling that stays engaging without going over the rails.

The Book of Kevin starts out its final season with a massive flashback (in a sense) to a 19th-century doomsday cult, a la The Guilty Remnant. Like the prolog to season 2, this has foreshadowing written all over it. A woman, her husband, and son await the end of the world, white gowns and all night after night. The world ending event never does happen, and the woman loses her husband and child in the process and is mocked by the townspeople. Flash forward to present day, and Kevin Garvey (Justin Theroux) is now the chief of police in Jarden, aka Miracle Texas.

Miracle has since become a more “chill” camping ground for people to come and go as they please. We are now three years later following the events of season 2, which we find out that the members of the Remnant who were confiding in an enclosed location were bombed by an unknown jet and murdered. Kevin and the Jarden Police force are, of course, covering this event up by claiming it to be a “freak gas explosion by a cigarette.”

Things seem to be relatively standard for the Garvey family at first. Tom (Chris Zylka) is working alongside his father on the force. Nora (Carrie Coon) is working as a departure agent, who investigates those who says their loved one’s departed, and find out if they are telling the truth, and Matt (Christopher Eccleston) is, well still being Matt. The thing is with Matt, he looks at Kevin differently now, as does John and Michael Murphy. They look at him as a Messiah. 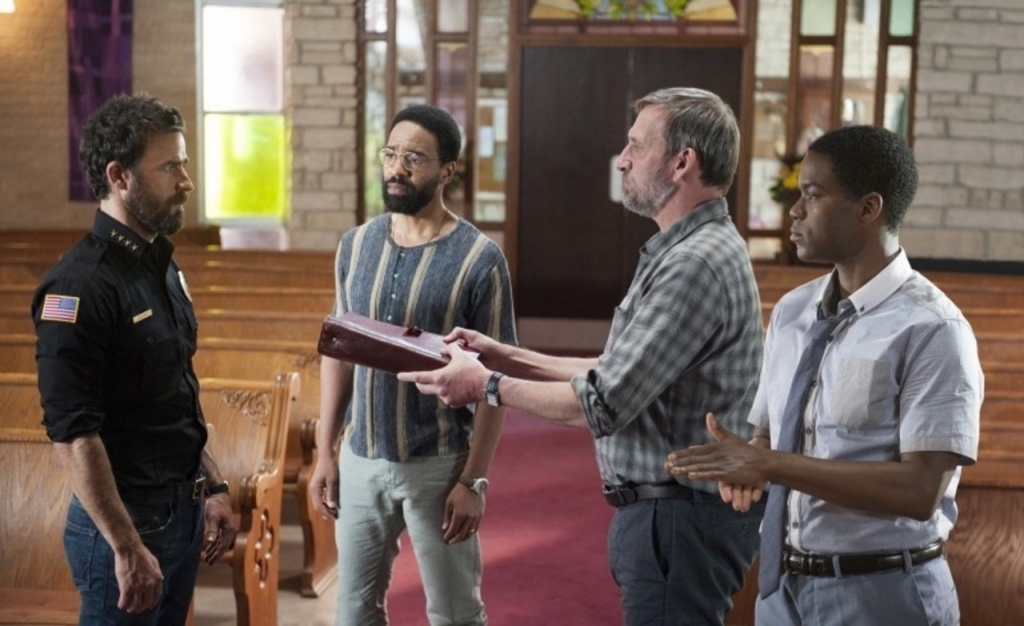 Yes, The Book of Kevin is Gospel that Matt and The Murphy’s are writing. Considering Kevin has come back from the dead twice now while simultaneously entering a purgatory/afterlife of sorts, they want to chronicle his life story due to his god-like capabilities. Kevin is pissed (naturally) at the face that they’re doing this but soon realizes that this might not be such a bad thing after all. “I’m not Jesus, I can die,” Kevin tells the trio. They agree. However, they don’t think they Kevin can die in Miracle. This makes perfect sense because no matter what you may reflect on The Leftovers, it’s almost fact by that point that Miracle is a unique place. Earlier in the episode, we see Kevin’s “cufflinks” box, which includes duct tape and some small plastic bags so that he can kill himself.

Yes, despite his attitude, Kevin is well aware he can’t die in Miracle. Also earlier in the episode, Guilty Remnant truthers make their way to a public baptism held by Matt and contaminate the “sacred water” of Jarden. Without hesitation, Kevin jumps in and drinks the water, only to find out there is no poison and was a prank. Now, more than just three are looking at him differently, and now is guilt baptized by Matt.

Oh yeah, Laurie and John are now engaged to be married and run a fortune teller scam together. Shocking would bet an understatement. How in the hell did John and freaking Laurie get together? Why is everyone so cool with it? I need answers!!  We haven’t heard anything about Erika (Regina King) or the whereabouts of Lily, the adopted daughter of Nora and Kevin. Topping things off, the episode ends to a flash…something…set in Australia. We see a woman collecting notes from doves and delivering them to another woman. The setting is similar to the 19th-century flashback that opened the episode. Only this time, the woman receiving the doves asks someone named Sarah, “does the name Kevin mean anything to you?” The camera pans back to a significantly aged looking Carrie Coon who only says, “no.”

Who is Sarah? Is she Nora? What is this place? I NEED TO KNOW!

Okay back to reality here. The Book of Kevin did exactly what it needed to do. It showed us most of the characters and where they currently reside. A plot is set up for the 7th-year anniversary of the departure and what will happen on that day, while also introducing some of the bigger questions and themes for the epic final season. I am miserable that the episode wasn’t longer, intrigued by what’s to come, and will be sitting with these 60 minutes of television until next Sunday.

The Leftovers airs Sunday nights at 9 pm EST on HBO