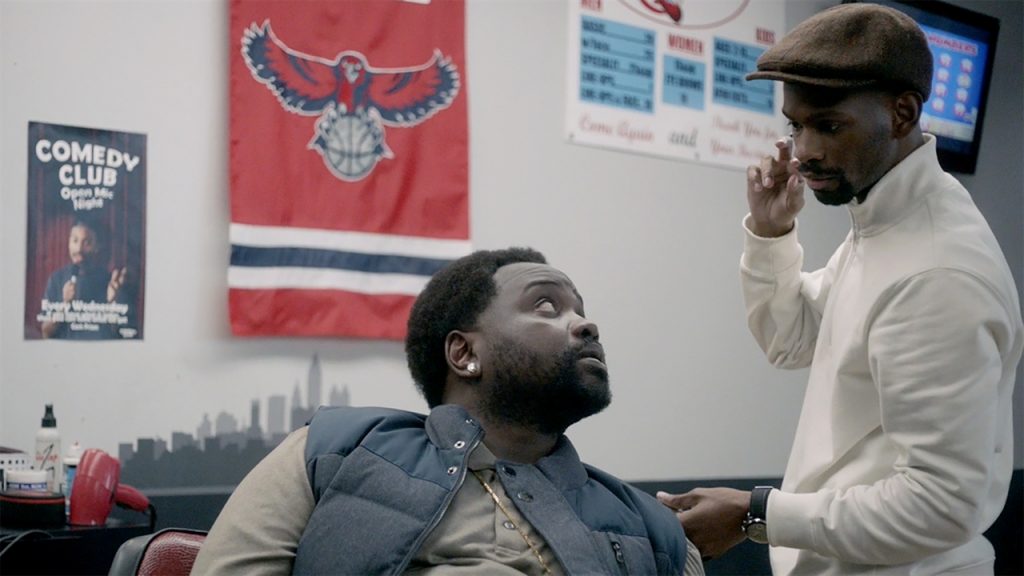 The relationship between a black man and his barber is an important one. It’s one thing for men to get a haircut, but the whole experience in black America is a different one. The shop itself, and all that’s associated with it has a value equal to the community. It’s a safe space where a form of art takes place, filling the patron with confidence in the process. Atlanta – Robbin’ Season looks to both show the rest of America what this looks like and apply the season’s theme in “Barbershop.” What could have just been a rude experience between Alfred and his trusted barber turns into a wild odyssey, robbing Alfred of his day in the process. Additionally, following last week’s dramatic “Helen” episode, “Barbershop” feels like a nice absurdist escape.

“Barbershop” doesn’t take long to let viewers in on the joke that will run throughout the episode. Alfred has come in to get a haircut from his barber Bibby (a superb Robert S. Powell III), in preparation for a magazine photoshoot. Bibby arrives while on the phone, making Alfred uncomfortable. Soon enough, Bibby is even leaning on Alfred’s head, while still on the phone. This is around the time the joke becomes clear – Alfred is going to spend almost the entire episode getting close to having his hair cut, but not quite getting there.

The key to this episode is the character dynamic. I’ve already spent time praising how much I enjoy Brian Tyree Henry’s performance as Alfred, letting his easy-living lifestyle fuel frustration that tends to come out through hilarious facial reactions, rather than actual action. Pairing Henry with comedian Powell’s motor mouth take on Bibby means getting a fantastic foil for Alfred to have to deal with, in his quest to finally get his hair cut. The great thing is how the episode has Alfred going along with Bibby for the increasingly ridiculous pit stops he has to make during all this time. 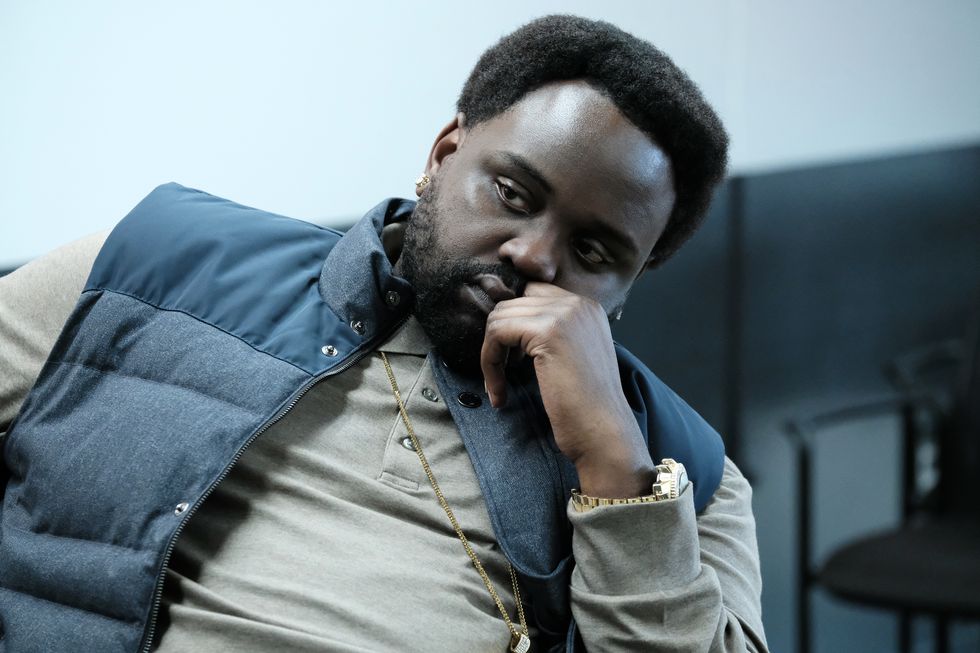 Making this all the better is how Bibby got to shave off some hair on Alfred’s head, before packing up and getting in the truck to visit his girlfriend (with Al riding shotgun). This means most of the episode has people seeing Paper Boi looking ridiculous to the point of Bibby’s truant son even calling him out on it. And yet, through all of this, Alfred remains a level of content. He gets mad; sure, with a desire to get on with his day and not be bothered by police while still on probation, it makes sense for him to vent his frustrations. That in mind, Alfred sticks with Bibby as much as he can, playing along (by not saying anything) with Bibby’s exaggerated or complete BS stories, and even helping grab lumber from a house under construction.

As mentioned, the barbershop relationship is essential. While it doesn’t seem entirely out of character for Alfred to stay as involved as he does with Bibby, it’s also a matter of holding onto whatever level of respect he has for the man. This is a person who is an important factor in his life. Bibby’s work helps Alfred be Paper Boy, a confident, talented rapper that could be taking on the Hollywood scene, as Bibby speculates. It’s not easy to walk away from getting a haircut, let alone trying things out with a new barber, as shown at the end of the episode.

I mentioned the whole Robbin’ Season angle when it comes to Alfred’s time, but it serves as a part of this episode when it comes to Bibby as a whole. He steals money from his girlfriend, he steals lumber and tops it all off with a hit-and-run. Alfred does not steal from Bibby. He ends up paying the man for his service, even if it’s not the great day that Bibby tries to take credit for giving him. In a season that already saw Alfred getting robbed by his long-time drug dealer, the rapper remains content to let life come at him how it does, while he stays fairly laid back through it all, even if it does cause some irritation.

“Barbershop” is not an episode with any dramatic heft. It’s a fun diversion focused entirely on Alfred’s situation. That said, it’s a hilarious episode, perhaps the funniest of the season so far. The two primary performances are perfect compliments to each other, and the scenarios Bibby keeps getting Alfred involved in are fitting in the absurdist sort of way one expects from Atlanta. I’m sure will check back up with Earn and Darius next week, but this was a fun way to spend time in and out of the barbershop. 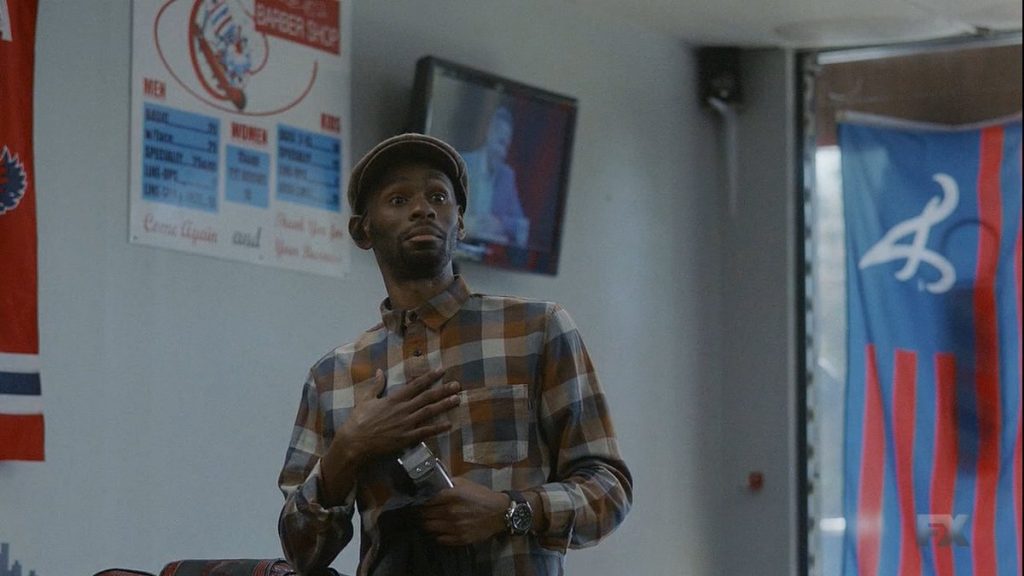 Donald Glover directed this week’s episode. His last directorial effort got him all sorts of awards, but that was the episode “B.A.N.,” and it had a bit more social commentary going on, compared to this lighter affair.

Lots of great lines in here that I tried to keep track of:

“It’s his fault!” – Bibby is explaining why he’s late.

“You’re a magician?” – This comes after Alfred already tossed the barber apron up to give the appearance of a cape.

“If you kill me, I swear to God, I’m gonna fuck you up.” – Alfred on Bibby not watching the road.

“For the record, I never wanted you.” – Bibby to his son. 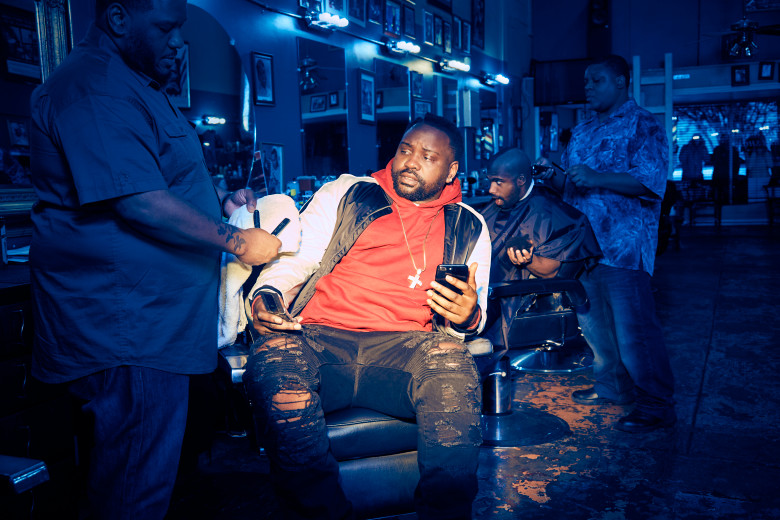 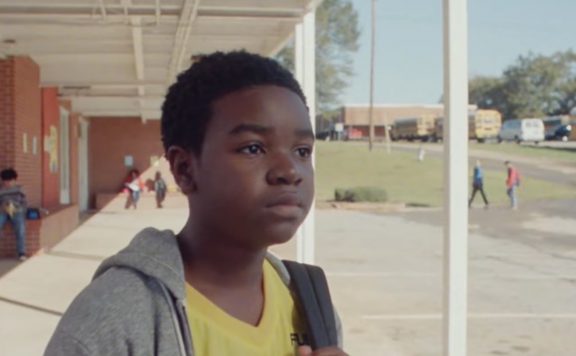