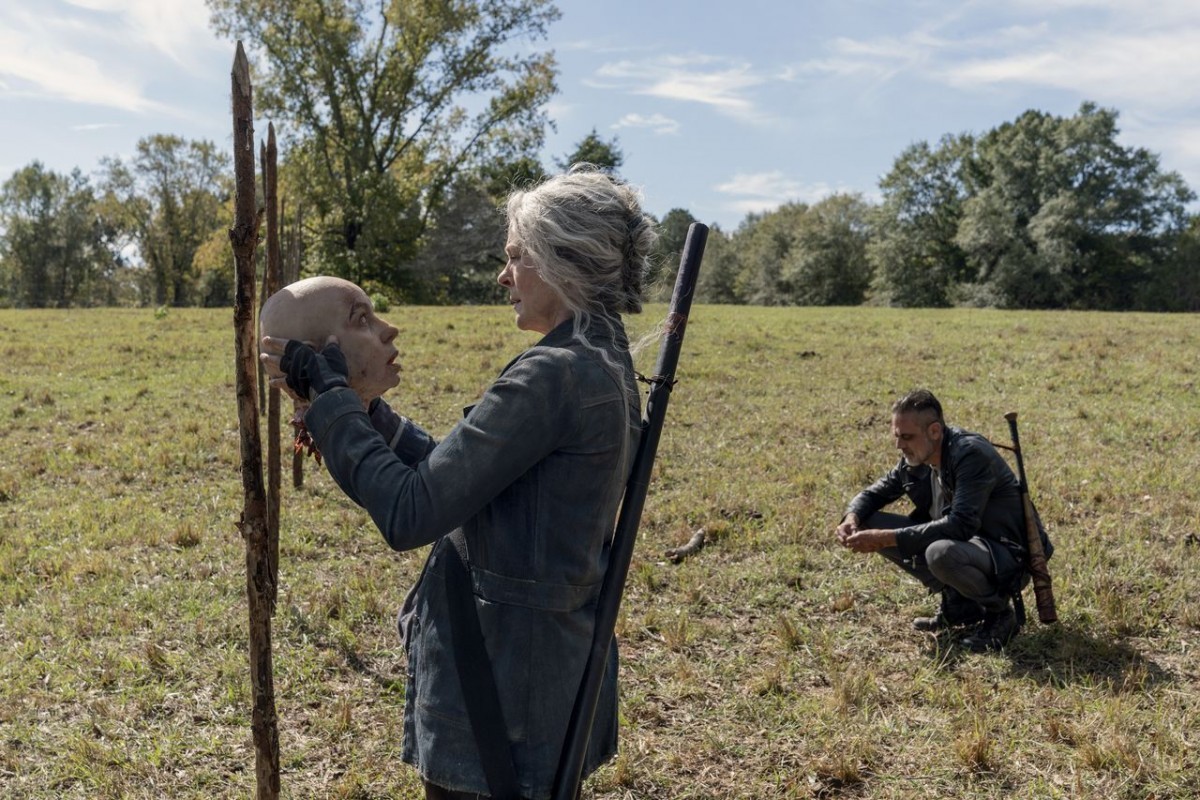 Looking at the title of this week’s The Walking Dead, “Look at the Flowers,” it would appear to imply a heavy focus on Carol or at least another dark look at the situation everyone is caught up in. In fact, Carol has equal time as the other main characters leading up this hour, and, if anything, there’s less of a need to look at the flowers, as every character seems to come to some sort of positive realization, even Beta. Yes, there’s a lot of danger still out there (again, Beta), but having character contend with the things that are messing them up makes for a good theme to work with, in an episode that’s a bit too sprawling, yet effective.

Fittingly, we take a few steps back at the start of the episode to understand the deal between Negan and Carol. Usually, I’d say there’s enough to understand in the reveal from a couple of weeks ago that makes a scene like this unnecessary, but there’s more going on. It’s not just that there’s a deal in place, but that we need to know where Negan’s mind is at. There’s a divergence here from the book, which I’ve thought about in a couple of different ways, but ultimately feel the show is doing what makes the most sense for the actor.

As opposed to keeping Negan as one self-sufficient and crafter enough to figure out a plan on his own (as in the comic), we see him in a vulnerable position and contending with the feeling of having power again by asserting himself amongst the Whisperers. Voluntarily taking himself out of that position only adds to his plea for Carol to talk him up to Alexandria, so he doesn’t go back to being the guy everyone hates and has nothing. 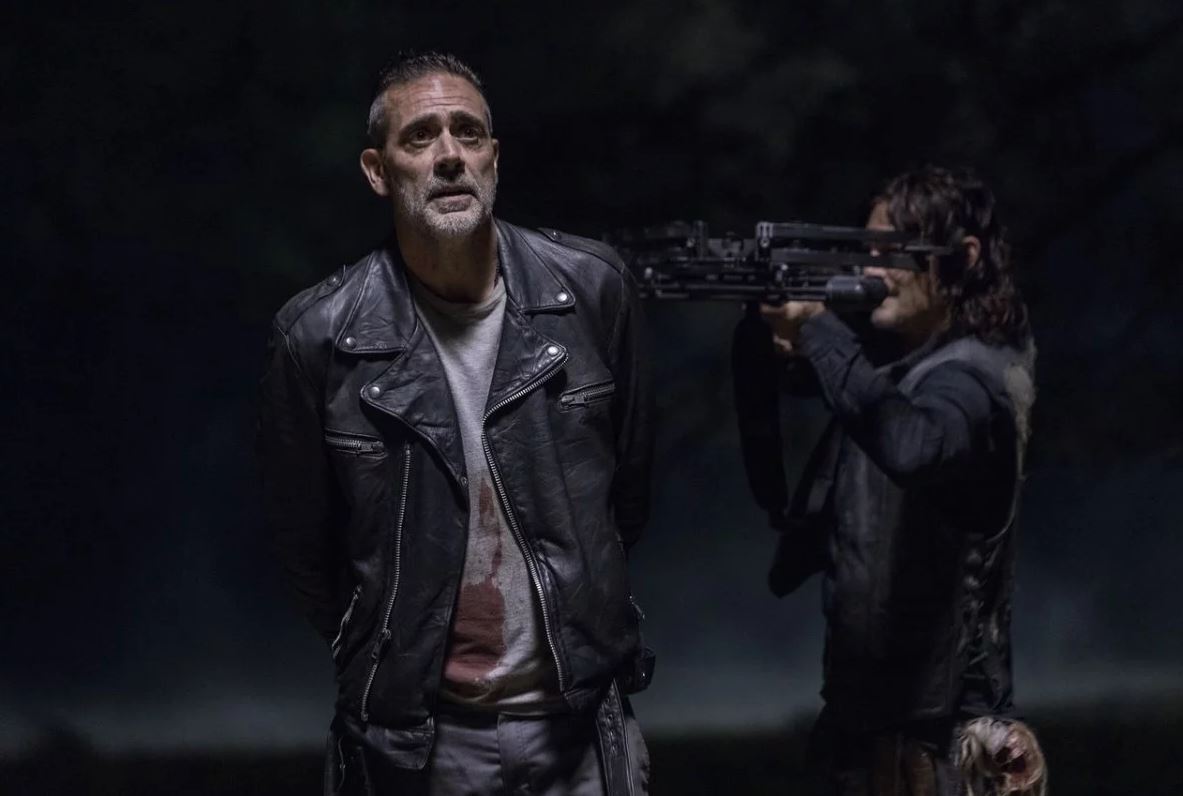 So, having a good chunk of the episode focus on Negan and Daryl works out pretty well. Their interactions work because it’s two alphas who have strong feelings about each other and need to reckon with a change in the status quo. Allowing Jeffrey Dean Morgan the chance to play up multiple sides of Negan is effective, as he has to be at his lowest, play up the schtick again, and deal with a renewed sense of confidence. As he makes his way back into Alexandria, I don’t know where things go next, but it should be interesting to see.

On the Carol side of things, she spends most of the episode having one on one’s with the ghost of Alpha, allowing Samantha Morton one last time to shine as one of the best villains this series has delivered. All of this is inside of Carol’s head, of course, but given the weeks of dealing with Carol’s struggle to contend with grief, the role a true nemesis has had on her, and how she connects with the rest of her people, I liked how this worked as a step back in the right direction. Even better is how the episode doesn’t end with everything being all forgiven. Daryl still has little to say to Carol, and I’d imagine others have similar feelings.

Beta has a wild journey involving grief and his role in life as well, following the death of the person he most admired. Grabbing Alpha’s head and using it as a guide, he finds his way to an abandoned town, entering an area forcing his true identity back on him. I can appreciate the show’s choice here in fleshing out (no pun intended) Beta’s character. In the comic, there’s only time for a half-joke about Beta being a well-known celebrity. Here, we get more of an arc showing Beta’s former life was as a famous country singer, who may or may not have had a psychotic break even before the dead began to walk. 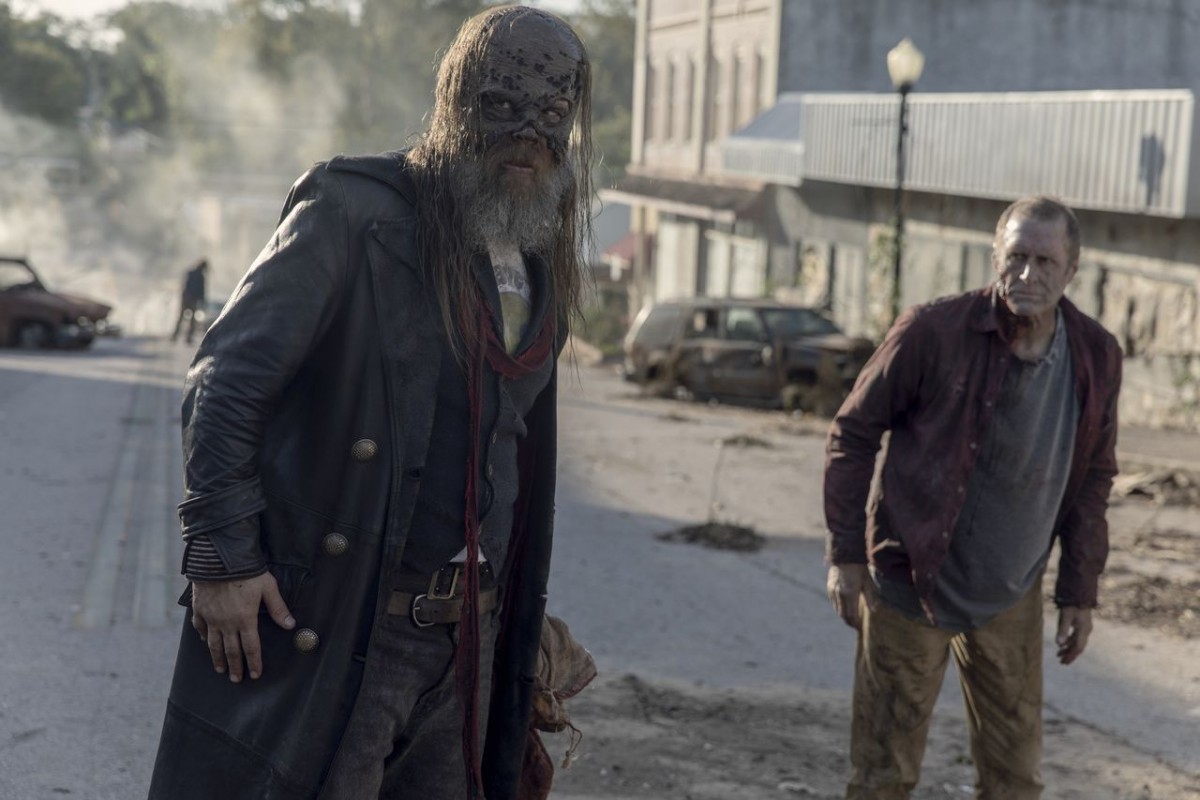 Watching him tear up a room, only to put on his record and gather together a horde was quite a move to see in action. Ryan Hurst has managed to do a lot with his three-dimensional Michael Meyers routine, and that’s been fun to watch. Seeing him emerge victorious to some degree by the end of this episode, with a piece of Alpha’s face now attached to his skin mask, shows a level of evolution that I can only hope helps him fill the voice left by the killing of his mentor.

Last up is Eugene, Yumiko, and Ezekiel. There’s little to say about Yumiko, other than the level of peace she seems to have reached with Magna, regardless of whether or not they stay together, and the fact that she’s clearly a good guidance counselor. Also, considering this mission is a result of his efforts, Eugene doesn’t actually have a lot to contribute here either. He gets all mush-mouthed about explaining the Stephanie rendezvous situation but gains the confidence he needs from the real lead of this storyline – Ezekiel.

I feel like we’re on “Ezekiel Watch” every week because this guy is just not going to last much longer. Comic-wise, he’s been past his expiration date, so watching him contend with his cancer, let alone not having deep connections with anyone outside Carol and Jerry, means his time could come at any moment. I didn’t think he was going go out against the walkers who (sadly) bit his horse, but you can see how much he is struggling. That’s what made for a fine one-two punch when it came to seeing him be so low, only to have Yumiko say all the right things for him to look at the bright side of life again. Having that followed by his immense comic relief coming in the form of the odd setups of walkers in the town the trio arrives at made things even better. 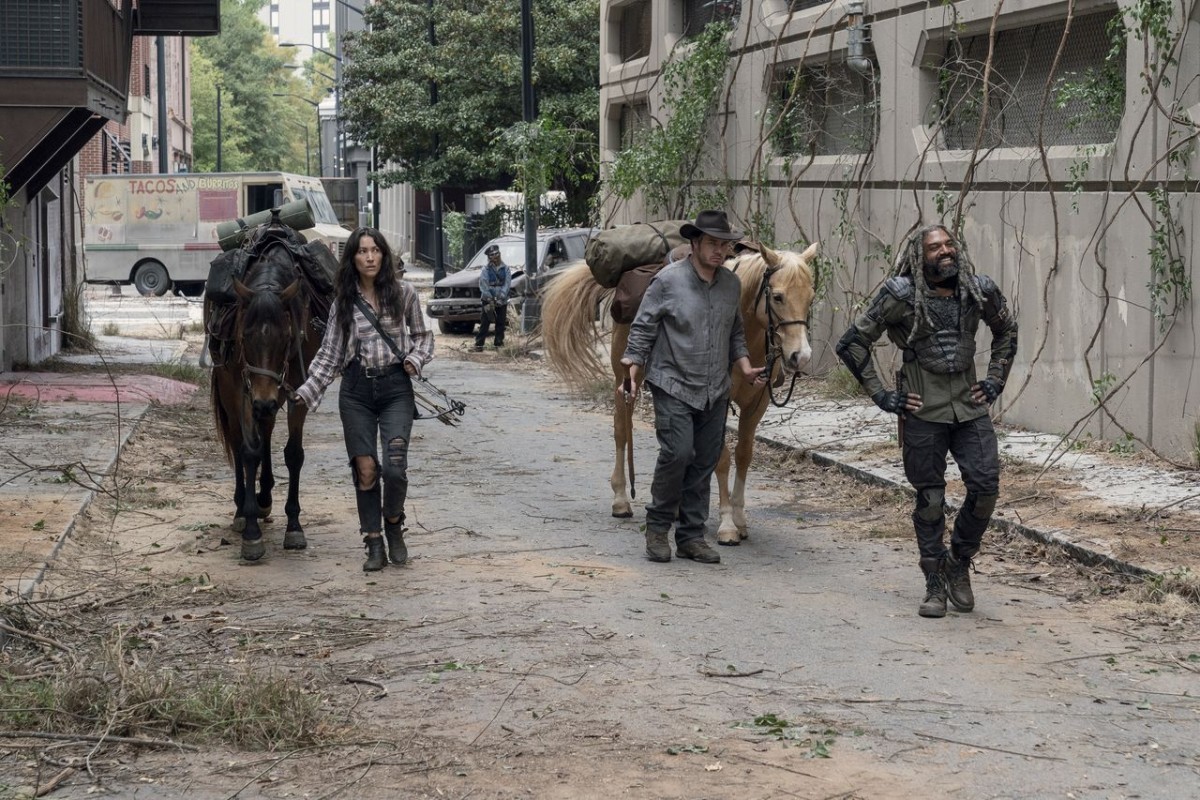 This is also one of the three big endings for the episode – the encounter with Princess. No, there’s not a name as of yet, but I either didn’t know or forgot that Paola Lazaro had been cast as Juanita Sanchez, a quirky character we will undoubtedly learn more about next week. While the pink zombie playsets we were seeing certainly provided me a big hint, the character suddenly showing up was a surprise I should have expected.

“Look at the Flowers” is a change in pace after last week’s brilliant Michonne send-off, but it makes plenty of sense in showing us what’s next and what’s left to deal with. As always, the performances make up for whatever is lacking in terms of dialogue, and whatever messy elements there are in establishing where everyone is at a given moment. That in mind, Ezekiel still needs to find Stephanie and Negan and Beta are about to enter new phases of their lives, so there may not be time to stop and look at the flowers. 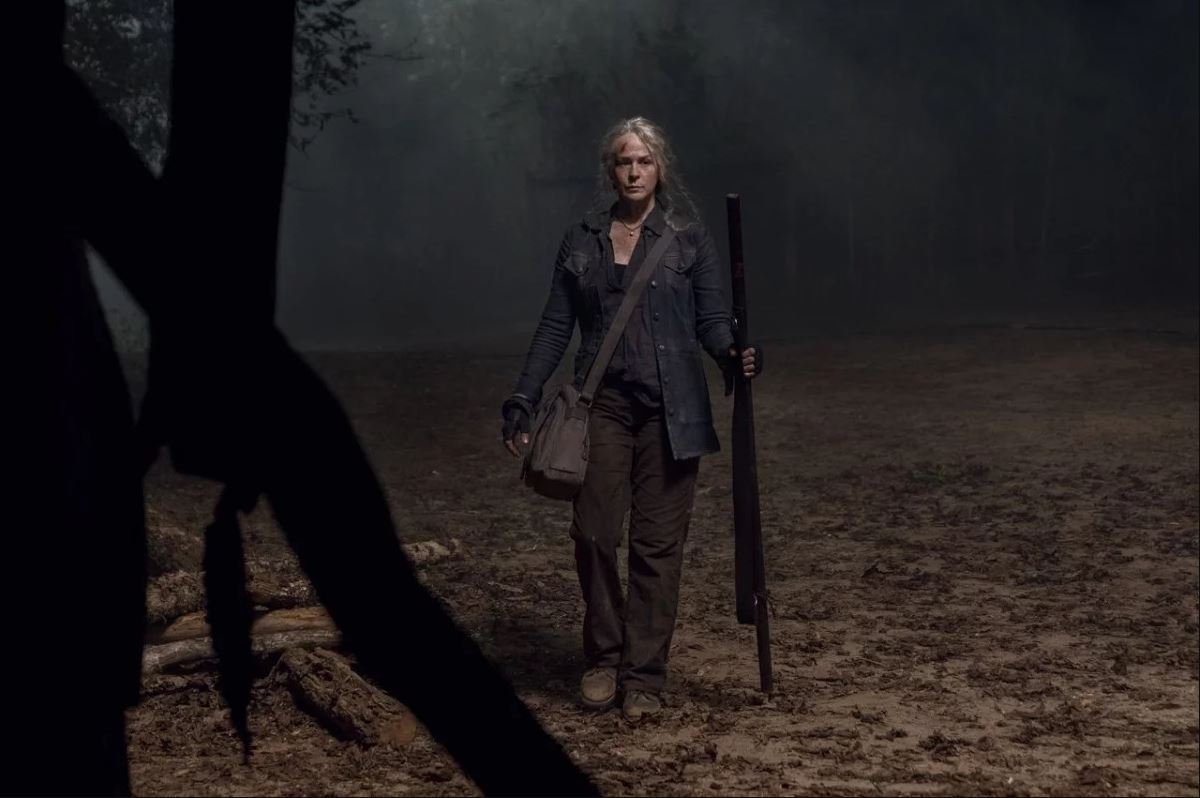 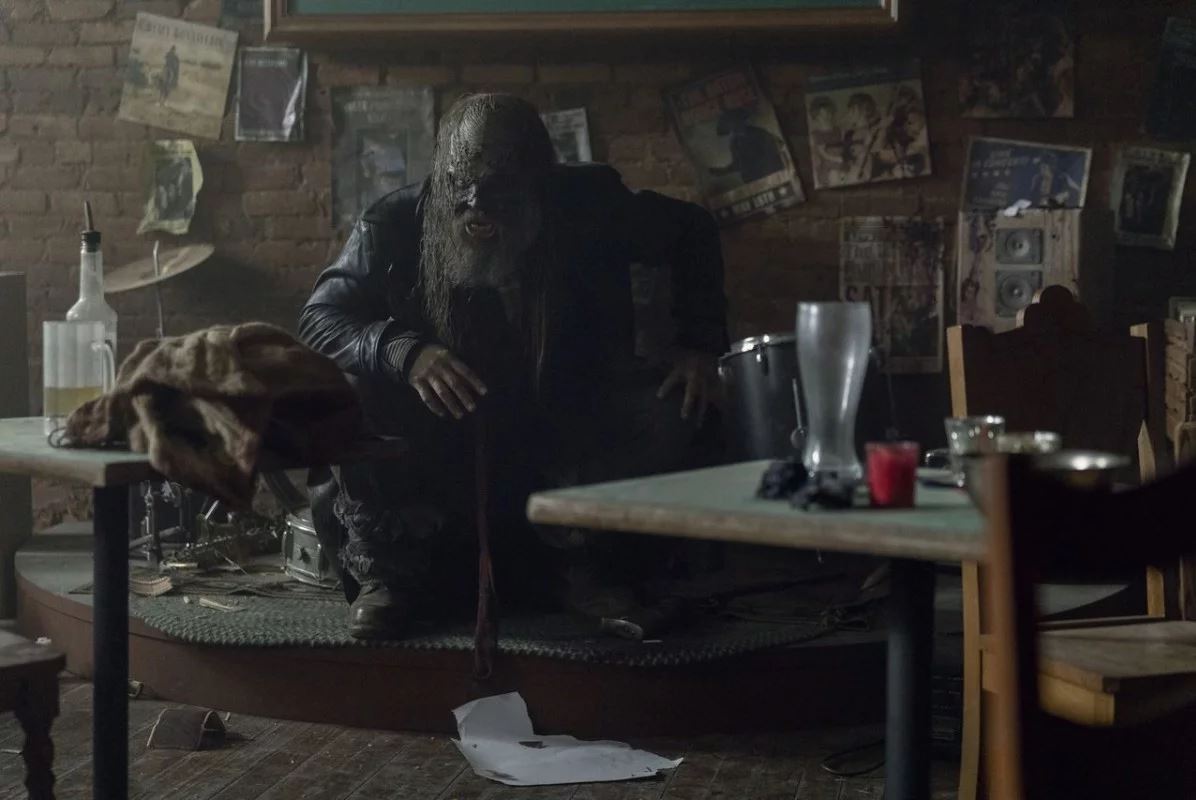 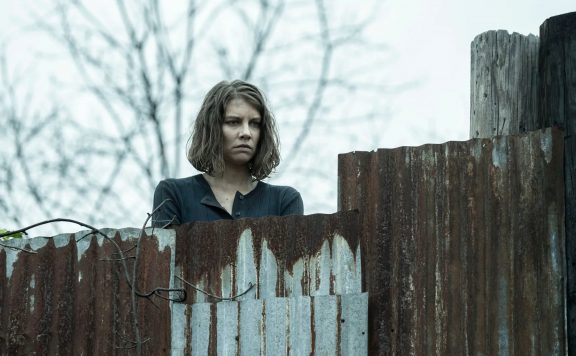