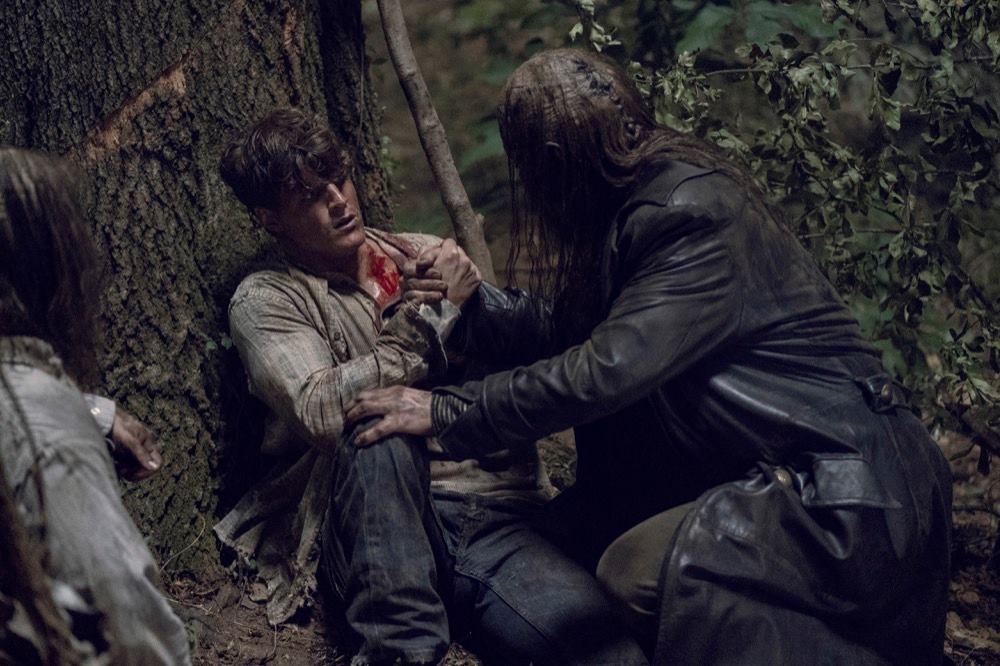 Do we talk much about how The Walking Dead is a comic book turned into a TV show? I ask because “Chokepoint” is a brutal episode, full of machismo, but it’s also a giddy good time. We get a mano y mano brawl between two very gruff men that is both tense and funny; in addition to the introduction of a bunch of shadowy cowboys who later refer to themselves as The Highwaymen. The good news is that this episode builds off the last two solid episodes to tell another story that features a beginning, middle, and end, while still showing growth in the main plot of this season. It just didn’t hurt to be smiling so much during it.

Picking up from last week, we have Daryl and Connie now bringing Henry and Lydia away from the Whisperers. Dumb Henry thinks he and Lydia can just run off and be together, keeping the Whisperers out of Hilltop’s hair in the process. Daryl, not yet committed to the idea of keeping Lydia, decides to keep moving with them, leading to a multi-story building that he and Connie decide can be used as a battleground/chokepoint for the Whisperers coming after them.

Much of this storyline is built around establishing the stakes and delivering on some full-throttle action, and it pays off. I wouldn’t say the camera work on display was great, as brutal as some specific shots were, but it was fun to see Daryl and Connie deal with the invading Whisperers. In particular, we got to see the Daryl vs. Beta fight that is as hilarious epic as one would hope and ends on a literal cliffhanger (except Beta actually fell off the cliff). These two are bound to have another bout, and I can’t wait to see it. 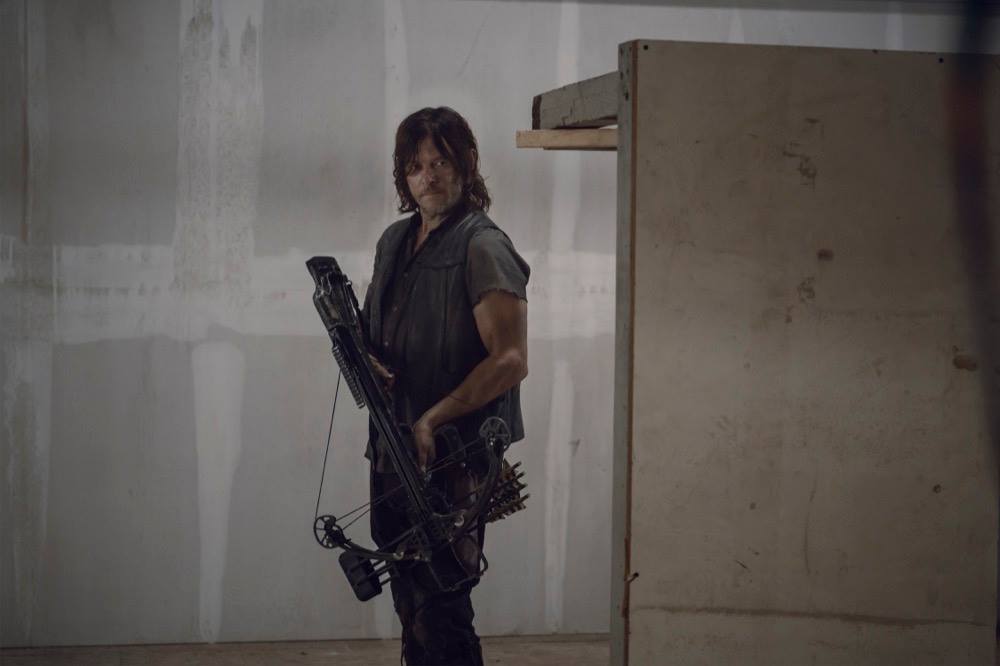 The end of this storyline has Daryl giving in to bringing Lydia back with them, as we all expected, but it works. Even Dumb Henry got some stuff to do as far as help fend off Whisperers, have his romance with Lydia blossom a bit, and get saved by the dog named Dog. Of course, the real joy had nothing to do with this, as attention shifted to Beta standing up at the bottom of an elevator shaft to reveal that he’s a monster that won’t stay dead, Michael Myers style.

There’s a smaller portion of this episode focused on Tara and Magna, among others, leading their caravan to the trade fair (KingdomPalooza). It allows for some more exciting action and speculation on whether or not Earl got bit. I mean, we also go to see Tammy’s walker-proof baby chest, but this whole section all served the point of introducing Angus Sampson and the Highwaymen. So, let’s get to that.

Early on we learn that a mysterious group attacked Jerry. They don’t show this attack, because no one wants to have to worry about Jerry, since he rules. Instead, we learn of the ransom demand for a toll to cross the roads leading to The Kingdom. In a complete anti-Rick Grimes move, the plan to completely kill this group turns into Carol reasoning that a grammatically correct letter means they could be dealing with civilized people. 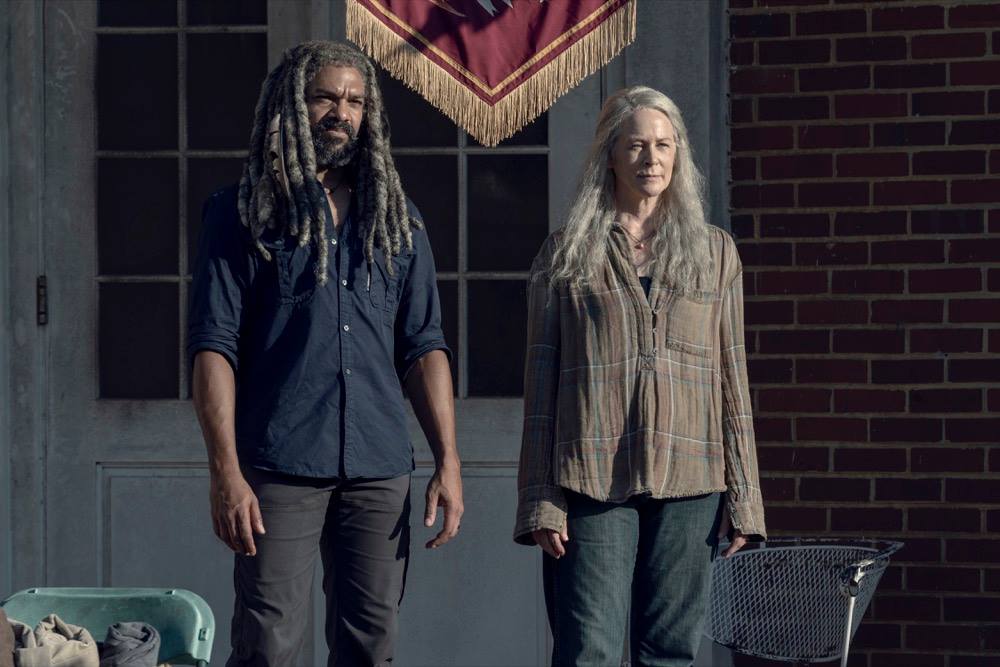 I like when The Walking Dead has characters standing around thinking things through, especially in an episode that focuses on one main issue that can be resolved within the episode. This was a fun scenario to see play out. Not only do we get to see this discussion, but we also get to see it resolved in a way that completely subverts expectations. Sure, the Highwaymen could have simply agreed, or we could have seen some drawn-out fight, but the show went a different way. Carol brings up the opportunity for these folks to watch a movie, and they are into it. That’s great stuff.

Not hurting at all is Sampson. A character actor with a massive build, he digs into the comic book nature of his character. Larger than life in terms of size and bravado, but not obnoxious. He’s not Negan. He has an identity, not unlike King Ezekiel. And like the King, he can think what’s best for his people. The idea of doing good work as a protection unit leads to good relations between everyone, and I hope we can continue to rely on that as a positive move forward in regards to these communities at large.

There’s still the matter of the Whisperers. Now that Daryl and company have found a way to piss them off, even more, this is a threat that will likely deal maximum carnage on Hilltop and the other communities. It’s not going to go well when they do either; I can guarantee that based solely on the show’s history. That’s not a good thing to look forward to, but only in terms of potential emotional response. As far as the show’s quality goes, it’s great to know stakes and threats are a big part of what’s working with this new villainous group. 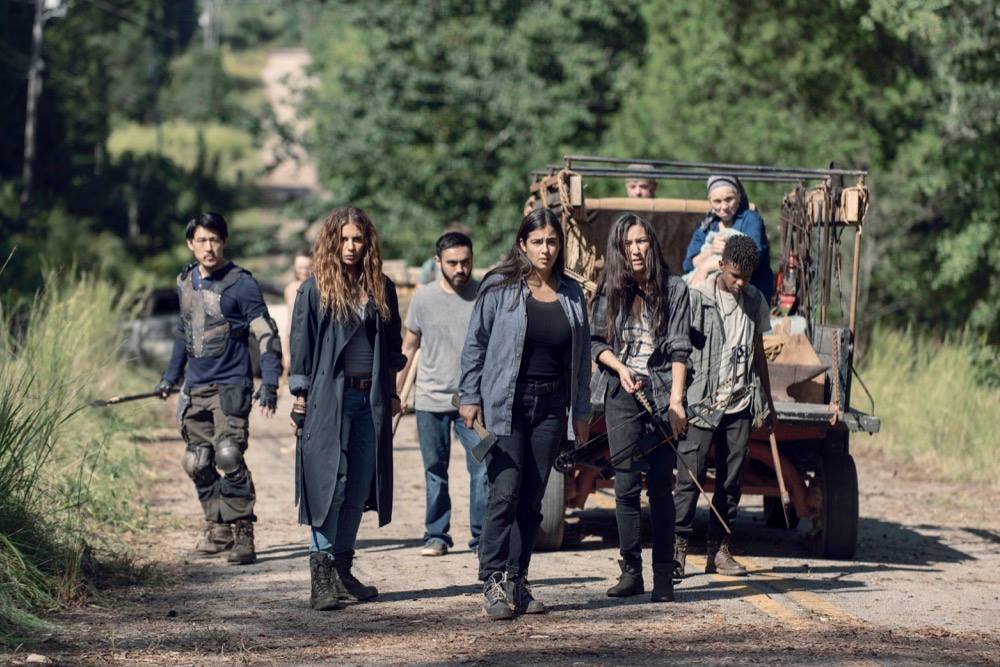 “Chokepoint” works as a solid Walking Dead episode for its structure, while still delivering on character and action. I like the steps we’re taking to handling these mini-stories on the literal road to the fair. It’s just too bad we likely won’t be able to kick back too much once we sit down and watch all these communities bond. 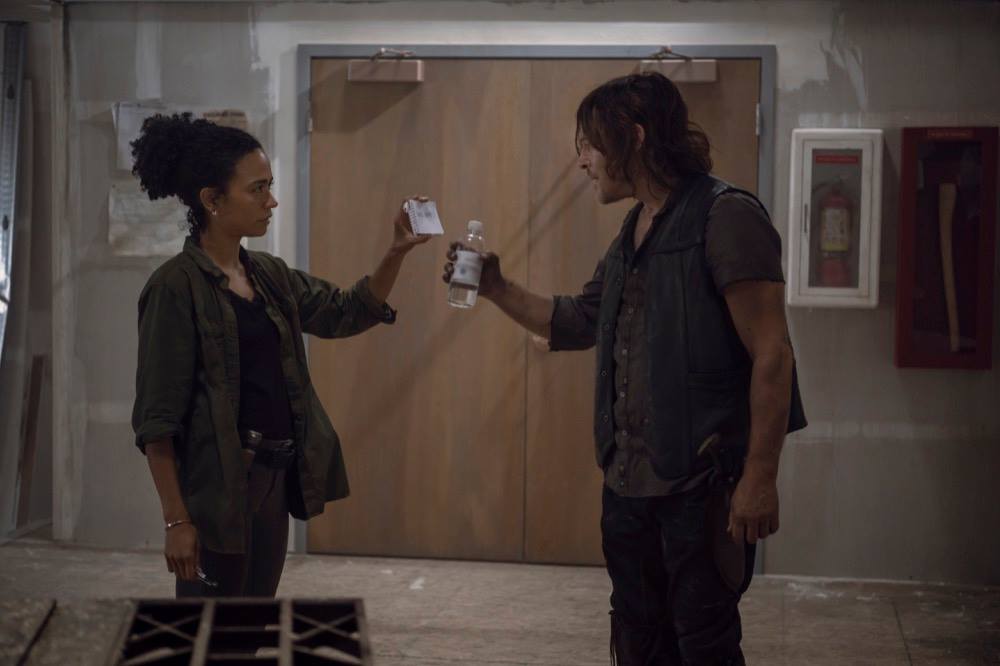