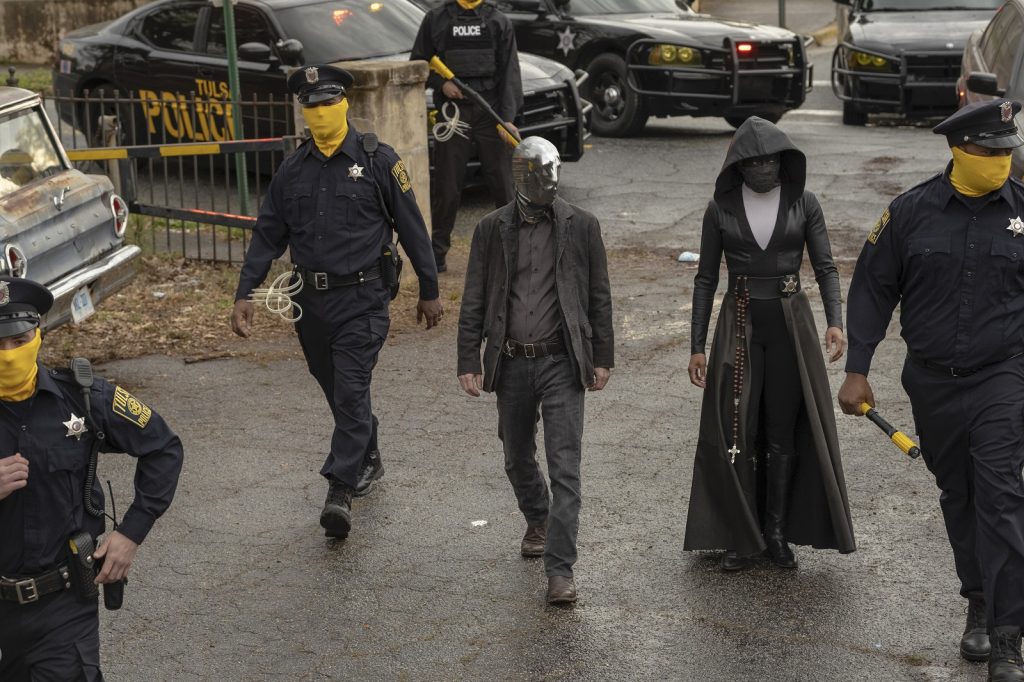 Jumping back into the world of Watchmen seems like a wild prospect that has already shown to be an ambitious, exciting, and very intriguing opportunity. Series creator and showrunner Damon Lindelof is a massive fan of the original graphic novel created by Alan Moore and Dave Gibbons, and it shows. I have no idea what to expect from the remaining eight episodes, but from what came through in this season premiere, “It’s Summer and We’re Running Out of Ice,” I can’t wait to see what this Watchmen series builds to.

The setup is terrific. Taking place 34 years after the events of the comic, we are seeing what’s happening in Tulsa, Oklahoma. This modern look follows an opening segment giving us an up-close and personal look at the Tulsa race riot of 1921 (an event not often covered in history classes, but basically the worst act of racial violence in American history). That context sets an exciting stage for all that we see next.

There is black imagery all over this episode. We see the play “Oklahoma” being performed by an all-black cast, complete with new influences. Police officers are clearly made up of an equal number of black and white officers on the job. Black memorials are seen around the city. In a series that is already full of Easter eggs for fans of the original comic, the level of detail to realize this world goes deeper than any casual viewer may realize. 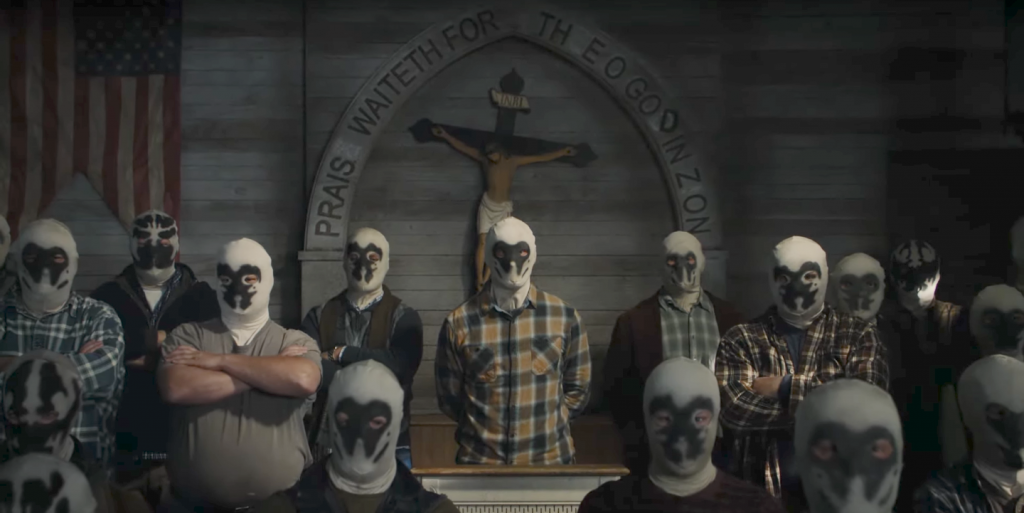 But what is setting things in motion? The attempted murder of a black man. However, things are different. A black cop pulls over a white man in a truck. He asks reasonable questions but becomes suspicious. As the cop asks for approval for his gun to be unlocked from his squad car, the man in the truck shoots the cop.

He’s connected to the Seventh Cavalry, a white supremacist group who have taken all of the wrong lessons from deceased vigilante Rorschach. They are a terrorist organization whose goals are unclear at this time. Still, we know they all have their own homemade Rorschach masks and need watch parts for some reason.

A lot is going on already, and I haven’t even gotten to the show’s main character, former detective Angela Abar (Regina King). Now a wife and mother opening a bakery, she also works as the vigilante known as Sister Night. Wearing a functional coat with a monk-like hood, a shroud to cover the bottom half of her face, black makeup to hide her eyes, and a star on the side to show some level of authority, it’s the sort of homemade costume that rings true to the vigilantes from the comic, yet completely fitting for modern society. 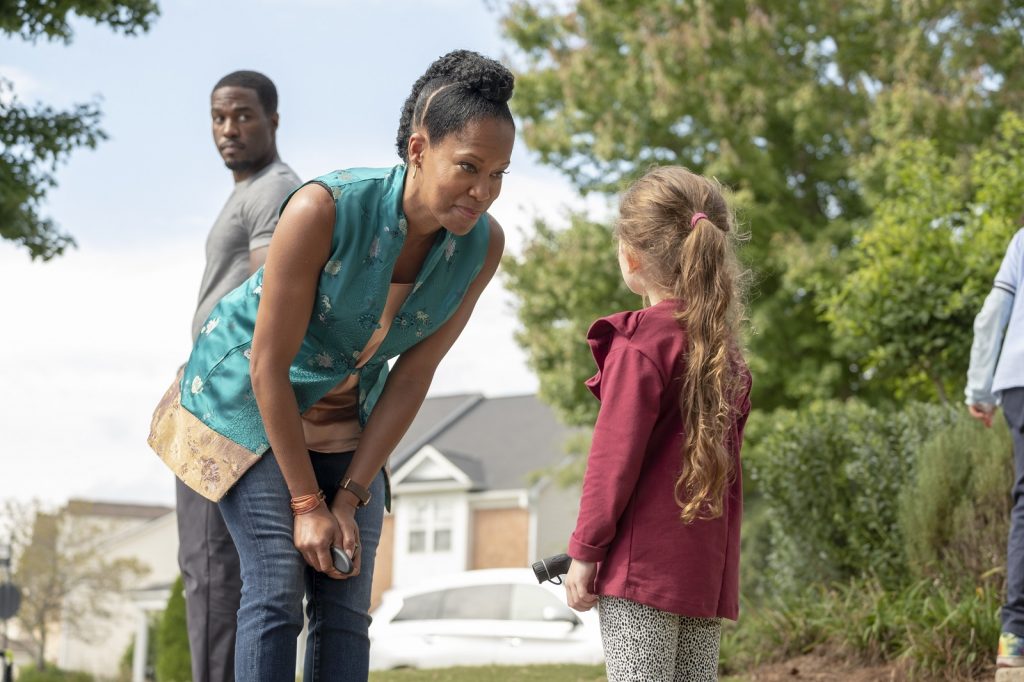 Sister Night is joined by Tim Black Nelson’s Looking Glass, another character with a distinct mask. Whether or not he has actual super abilities, he is something of a human lie detector. We see other “masks” as well, including Red Scare and Panda. They are all in league with Don Johnson’s Chief Judd Crawford, who gives a terrific performance in this opening episode.

Those new to the world of Watchmen may find themselves a bit lost at first, but this pilot goes a long way in building up a setting that looks like ours but is entirely different. As it stands, masks exist and work with the cops in Tulsa. The police all wear yellow masks themselves to hide their identities. This is due to an infamous event that resulted in the deaths of many officers and led to Angela stepping down from being a cop.

Other details fill out this take on society as well. Robert Redford is the longest-serving US President, following his election in 1992. The US flag has nearly double the star of ours, showing just how different the level of control is following the abrupt end of the Cold War due to a staged alien invasion involving a giant squid monster. There’s also a little time spent on Jeremy Irons’ Adrian Veidt, who finds himself either in seclusion or exile. 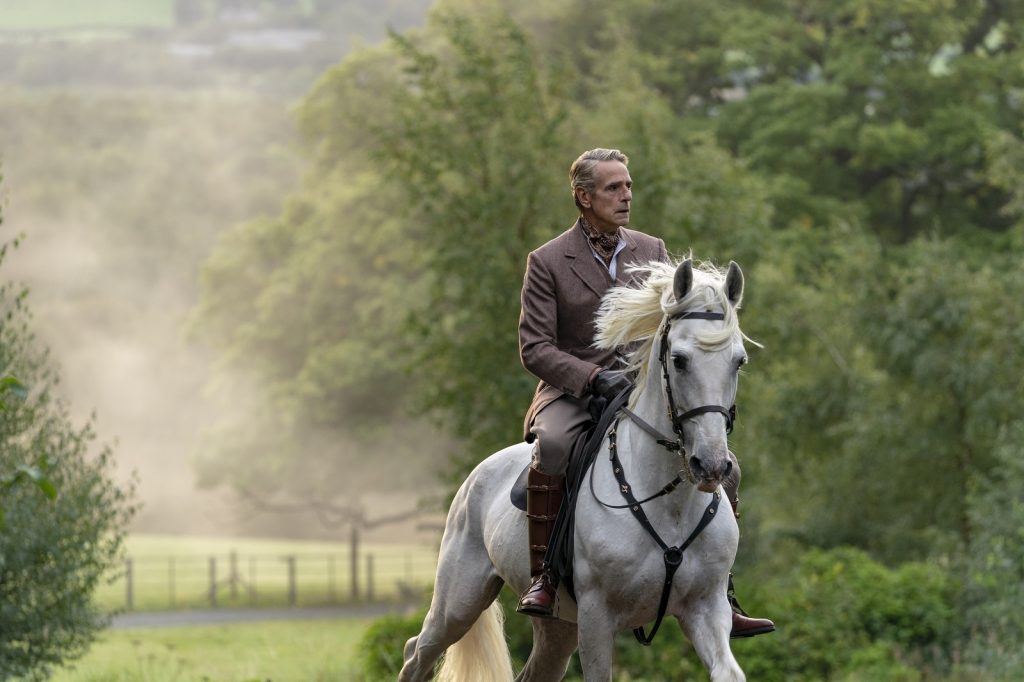 There are a lot of crazy details that would better work for those who are familiar with Moore and Gibbons’ original text. At the same time, I believe plenty is working in the show’s favor, thanks to how well it throws the viewer into everything. There’re enough abstract concepts taking place to keep things moving and compelling, but none of it is too far out there to alienate anyone randomly tuning into the latest HBO drama.

A lot of this comes down to Lindelof, who wrote this episode, and director Nicole Kassell. These two collaborated on The Leftovers (this show has a lot of shared DNA strands with that series as well), and seems to have everything mapped out as far as what buttons to push to make this latest comic book TV series stand out. The right emphasis is placed on subtle references to things such as a smiley face or the past history involving the Minutemen, among other neat touches. That in mind, Watchmen clearly has more significant ideas to explore.

We’re at a time when building interest around new premises for films and TV just won’t sell without an IP attachment. So rather than making a show set in an alternate universe that reverses the power dynamic of black people in America (among other things), here’s a show that relies on an established property melding and satirizing concepts such as the Black Lives Matter movement, as well as “All” and “Blue” Live Matter to be the same sort of anarchic mix of relevant ideas that worked as launching points for the original work. 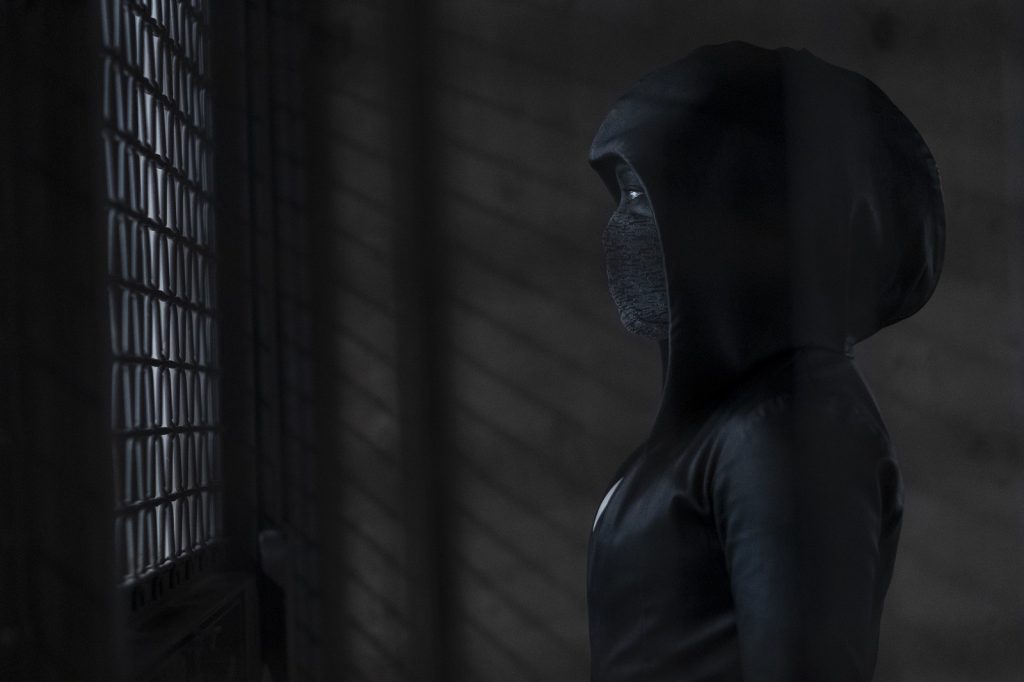 Given how much of today’s politics and social dynamics have a potential role to play in this series, I once again only imagine where this series will go, but I am happy to know there can’t be too much to hold back from. I mean, this is a series that manages to incorporate so many neat ideas, and great dialogue, before stopping things to engage in an action sequence involving miniguns, cattle, and Night Owl’s old ship, Archimedes.

I’m really just scratching the surface, and I look forward to seeing how this episode measures up with what follows. As of now, however, Watchmen is off to a great start. The work has been done to create a new iconic character to follow along with, and the great support is already coming across quite well. Given the other characters yet to be introduced, as well as the mystery involving whatever Veidt may be up to, there will be certainly more to worry about than just the white nationalists and occasional squid rain. 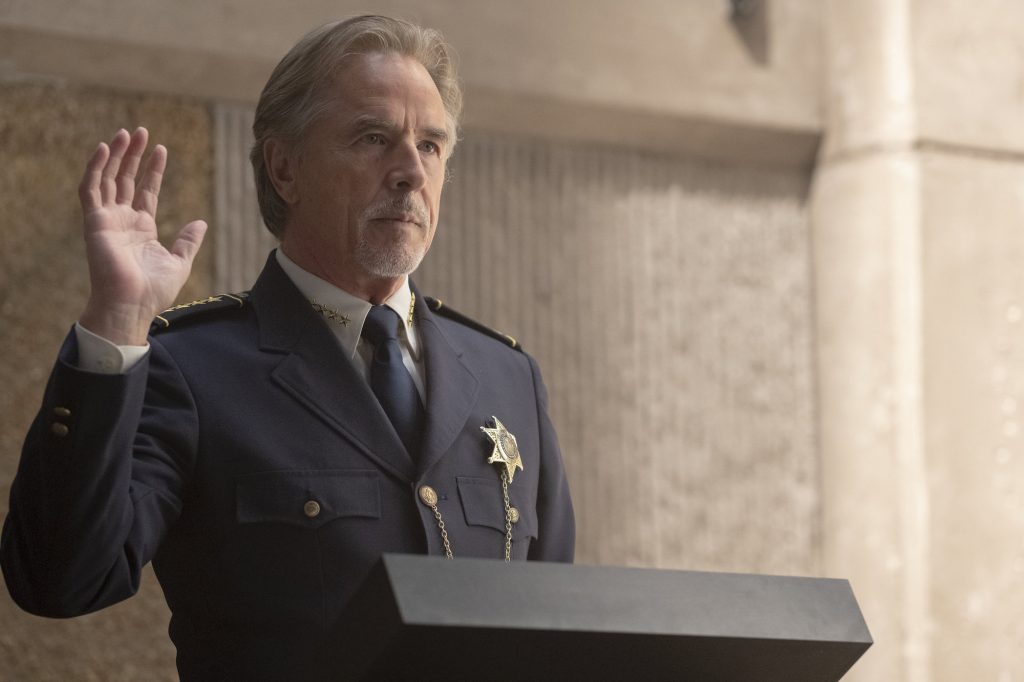 What Else To Watch For: 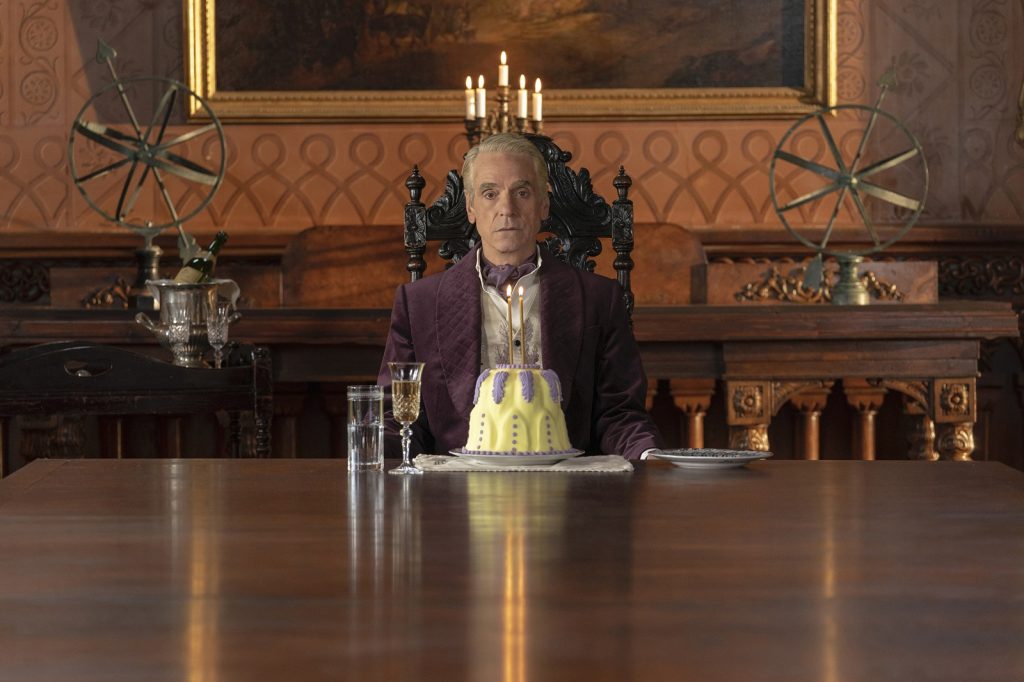 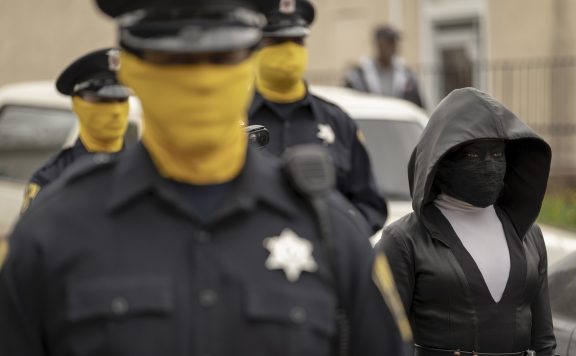