In case anyone hasn’t noticed yet, AppleTV+ is quietly winning the streaming wars. They may not have the massive reach of Netflix or the depth of content of HBO MAX, or the mainstream appeal of Peacock, Disney+, or Paramount+, but their limited (so far) catalog has been killing it. Literally, the little engine that could, AppleTV+ doesn’t seem to worry about how many shows and movies it has to offer, but it sure does seem to care about the quality. The proof? Ted Lasso has been dominating every award show for the past year, CODA just won Best Picture at the Oscars, the first movie distributed exclusively by a streaming service to ever do so. With Severance, Apple has the best new show on television, an addictive, dark comedy/drama that delivers a fascinating, weird, and haunting deep dive into our psyche that makes us beg for more.

Created and written by Dan Erickson and executive produced by Ben Stiller, who also directs most of the episodes, Severance is a sci-fi story that feels like a Black Mirror episode writ large, but, with nine episodes in the first season, the series is given the space and time to explore a much more complicated story and develop its characters in a much more fulfilling way. Unlike Black Mirror, Severance is more about people than tech, but its main thrust is how tech affects people and how they have come to allow technology to alter and define their lives.

In the world of Severance, which is set in a non-descript place in a non-descript time, biotech company Lumon has developed a controversial breakthrough procedure which allows people to “sever” their work life from their home life. It inserts a chip into a person’s brain which literally shuts off one part of their brain for 8 hours a day while they are at work, so the person has no memory of their regular life while in the office. Similarly, the person would have no memory or knowledge of those 8 hours they spend at work once they are home. Who is attracted to this sort of procedure and chooses to do it willingly? We meet four co-workers who share office space deep in the bowels of the sprawling Lumon headquarters, and, over the course of nine episodes, we get to know them and start to piece together the curious puzzle of their lives and their motivations. 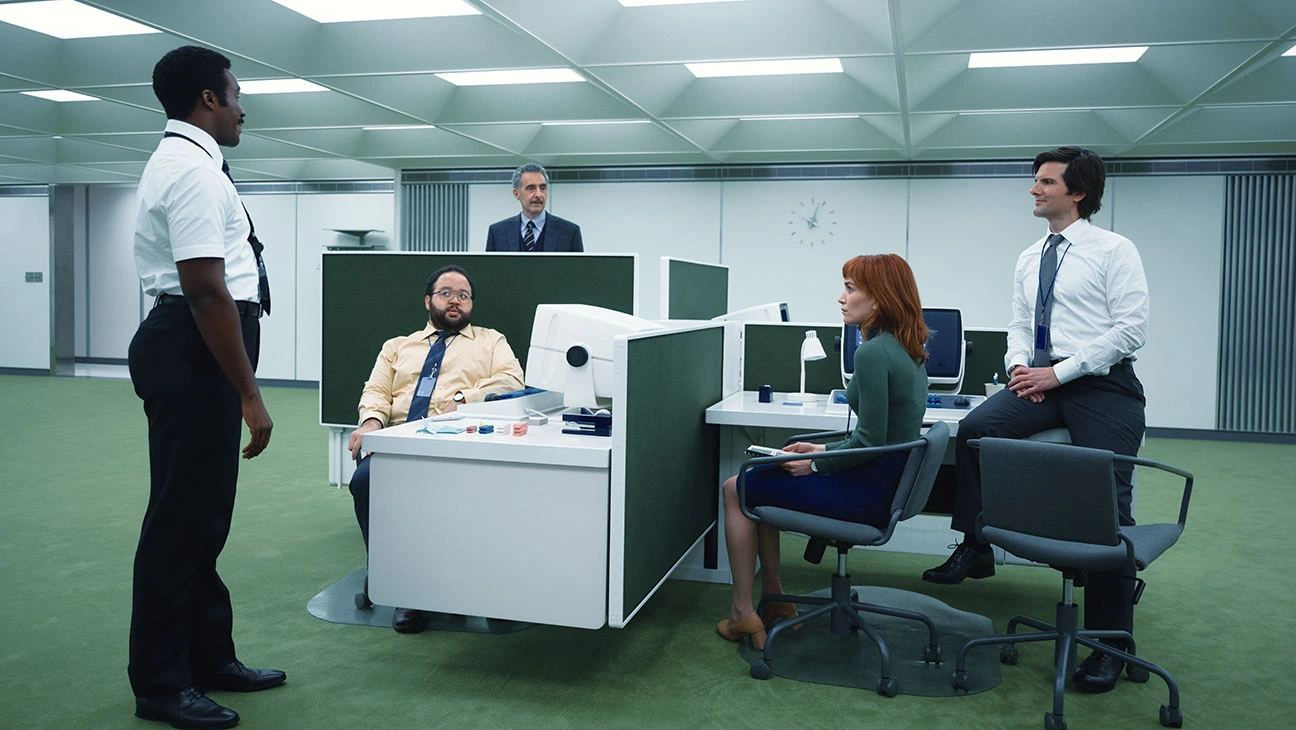 The only one we see outside the office is Mark, played by Adam Scott, a man who chose severance to deal with the trauma of losing his wife in a car accident. Overcome with grief, Mark was hoping it would help him cope by giving himself eight hours a day away from the pain. Mark believes the severance procedure has helped him, even though he still lives a life of quiet desperation when he is not at work, depressed and hopelessly lost. But Mark S., as he is known at Lumon, is quite the opposite, as he gets promoted to team leader when his friend and co-worker, Petey (Yul Vazquez) suddenly stops coming to work.

Mark S. is a company man, and he asked to serve as a mentor to a new employee who has been assigned to the team to replace Petey. The new employee, Helly, played by Britt Lower, is not as happy to be there as Mark S. is, and Mark S. has his hands full trying to get her to fall into line. The other two workers in the group are the outspoken Dylan, played by Zach Cherry, and the prim, proper and rule-following Irving, played by John Turturro. The four are “managed” by Milchick (Tramell Tillman), whose job it is to motivate and track the team as they fulfill their quota for the company. What do they do? Nobody seems to know, not even them, but it involves mining data on their computers, and their department is labeled “Macrodata Refinement Division,” even though nobody knows what that means or what their work even does. Ruling over all of them is Harmony Cobel, played by Patricia Arquette, who runs a tight ship, and has to answer to “the Board,” an unseen entity, when she doesn’t.

But not all is sunshine and roses at Lumon. A group called the Whole Mind Collective has formed on the outside, protesting their procedures and the very existence of severance. They have taken to the streets and the airwaves to raise awareness of what they perceive to be an inhumane procedure, calling it a “blight on mankind.” In response, Lumon mounts an aggressive campaign to fight the accusations, sending public spokeswoman Natalie, played by Sydney Cole Alexander, to counter their attacks and to push Lumon’s agenda. 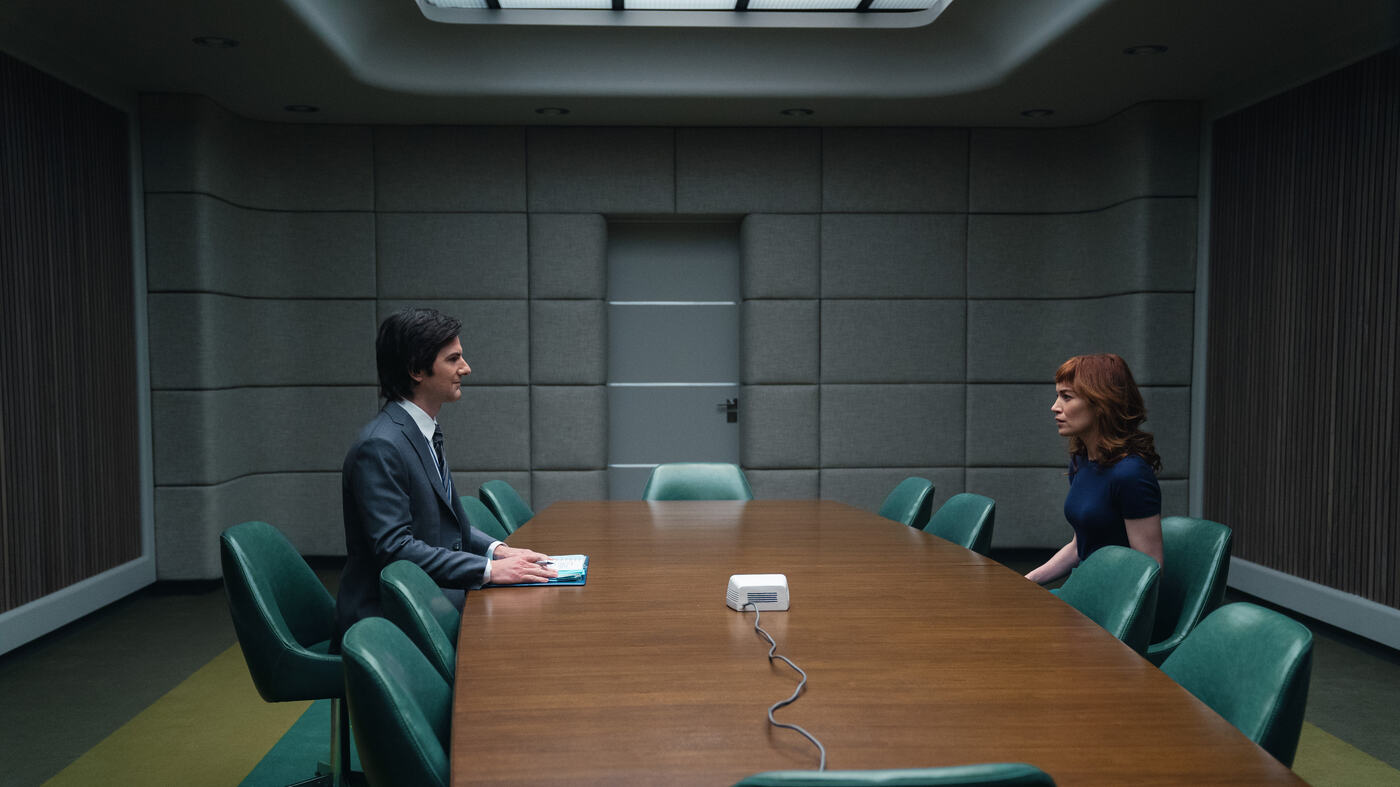 The outside Mark gets caught up in the controversy when Petey finds him and tells him who he is and breaks the news to Mark that Lumon is a corrupt company and severance is, in fact, a horrible procedure that must be stopped. Petey tries to convince Mark that Lumon is engaged in a massive conspiracy to hide the truth from its workers, using them as slaves to engage in mysterious work that might hurt or even kill people. But convincing Mark is harder than expected, as Mark has settled into his work/life balance, and is motivated more by inaction than any desire to upset his apple cart any more than it already is.

But slowly Mark starts to wonder about severance and both “innie” Mark and “outie” Mark begin to notice things to indicate that maybe Lumon isn’t what it appears to be and that maybe, just perhaps, there is a deeper conspiracy that needs to be exposed.

Although it is a wholly new concept and it is executed in an original and stunningly captivating way, what helps Severance work as well as it does is that there are threads of so many other familiar concepts that have clearly influenced it, from Eternal Sunshine of the Spotless Mind to The Matrix to Brazil to Office Space to Being John Malkovich to Lost, which give it just enough of a recognizable construct to invite us in, but then spins us off into its own weird world, introducing us to its own strange realities. The blend of dark comedy, horror, thriller, sci-fi and drama creates a magical brain jumble, as it prompts more questions than gives answers, and yet is still insanely fun. 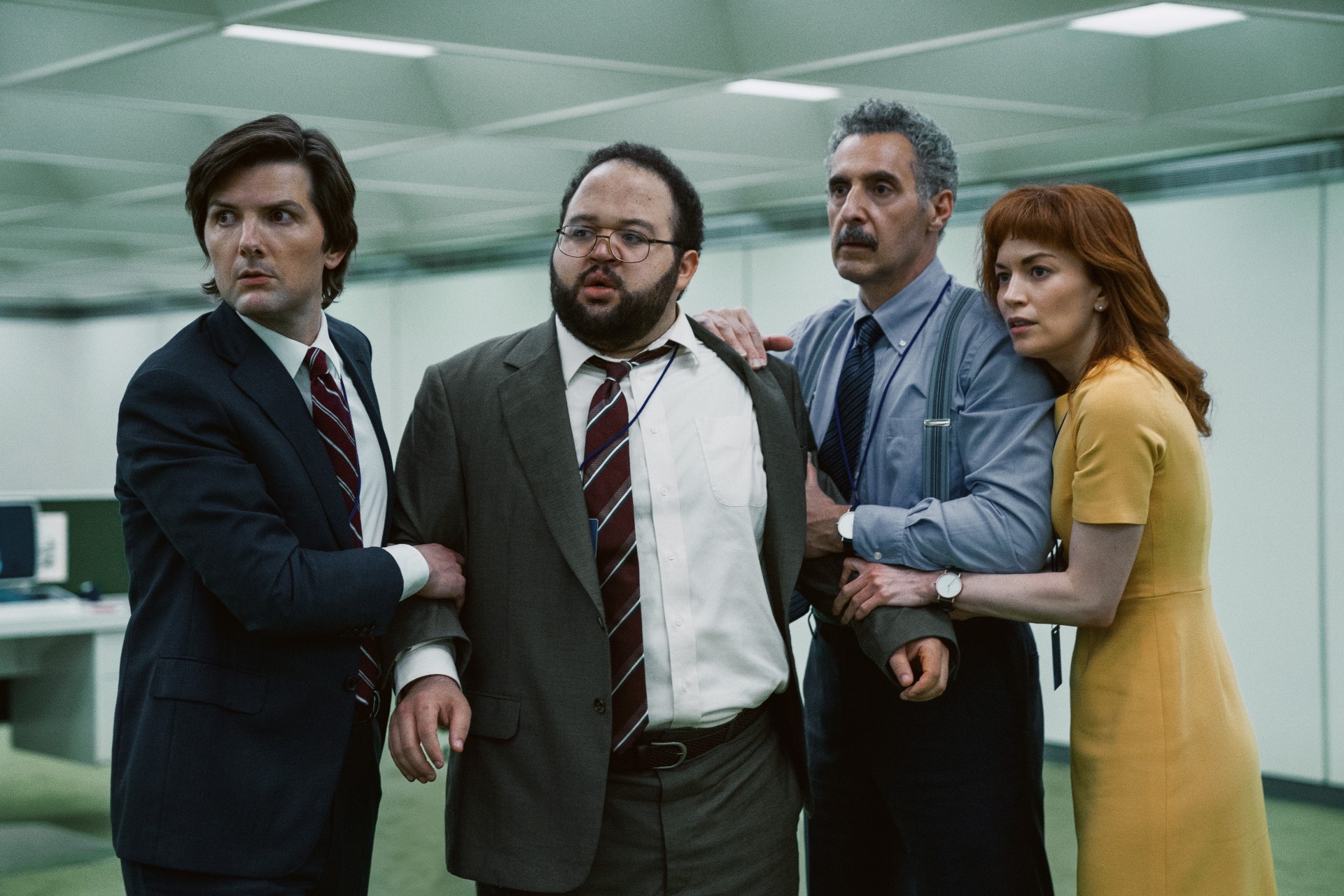 The two pillars on which this show is built are the performances and the production design, both of which are stunning, despite and perhaps even because of the high degree of difficulty. The production design by Jeremy Hindle creates the world of the show, a bleak, stark and lonely place, sad and empty outside Lumon, mysterious, ominous and intimidating inside it. Partnered with the evocative cinematography of Jessica Lee Gagné, Hindle creates the tone of the series, signified by endless corridors of blank white walls and white laminated floors, a maze of sanitized confusion reflective of the minds of those who have willingly accepted to partake. These endless, soul-crushing hallways are only interrupted by an occasional office or other hallway, narrow and intentionally claustrophobic, the only way out an equally claustrophobic elevator.

But it is the performances that bring it all together, as every actor needs to traverse a delicate path between absurdity and groundedness in order to keep the audience engaged in the journey. Adam Scott carries the story well, infusing the right amount of sadness and desperation into his character, and the hair and makeup team do their best to make him look even more lost and dead inside. There are moments when he looks literally like a wax figure more than a human, a brilliant bit of deception from the design teams to illustrate the fine line between real and imagined in this truly haunted and bizarre world. Every supporting performance is exceptional. Lower and Tillman are terrific at conveying varying levels of panic, restlessness, defiance, and control in transcendent ways. 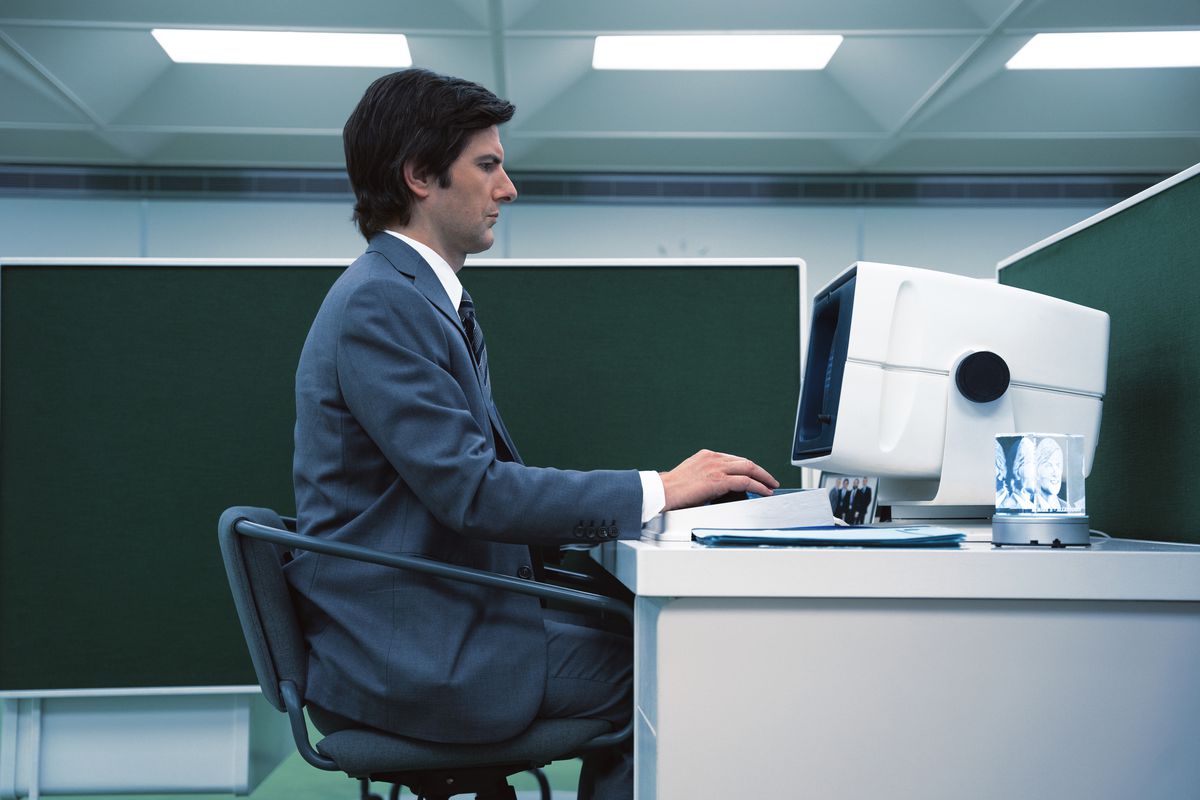 Unsurprisingly, the performances standing out most are those of Arquette and Turturro. Turturro, an actor who can truly do and be anything, finds yet another gear in this role as a gentle, sensitive, and willingly accepting soul who doesn’t want to rock the boat until, that is, he makes a connection with a similarly gentle and sensitive soul, played by no less than Christopher Walken. The scenes we get between Turturro and Walken are pure catnip, no doubt, but what Turturro does on his own is just as notable, as he communicates a level of melancholy that will break your heart as much as it will lift it up.

And as if Patricia Arquette hasn’t already proven herself to be an incredible performer, delivering the best performances of her career after she won her Oscar, she offers her best performance yet as an iron-fisted boss desperately clinging to power. Arquette’s genius is in her line delivery, and she makes every word of dialogue count with a wickedly gleeful lilt and an almost vengeful delicacy. Stiller obviously trusts Arquette and brings the best out in her, as they worked previously together on Escape From Dannemora, for which she was nominated for an Emmy. He lets her go here, allowing her to explore the nuance of her character, which she is clearly having a blast doing. Her best moments are when she finds a moment of comic brilliance hidden deep in the tightly-wound, controlled caution of her character. There is truly nothing better than an unhinged Patricia Arquette.

While the casual riffing on office life inspire the most relatable and comedic moments in Severance, it is in the deeper, more emotional questions that it finds its resonance. To what lengths would we go to escape from ourselves? Do we intentionally hide parts of ourselves, even from ourselves? If given the chance to be a completely different person, would we take it? But Severance is more than just these questions. It is a genuinely compelling story that carries us along a thread of intrigue, mystery, deception, and emotional vulnerability, mixed with a heaping serving of sci-fi fun and genuine thrills, to create a blended tonic of curiosities that are as addictive as they are truly weird. These first nine episodes are not nearly enough, especially since the season ends with one of the best cliffhangers I’ve seen since Lost. It’s a good thing season two has already been announced, or I may have to sever myself from my television.

Severance is now available to stream on Apple TV+. 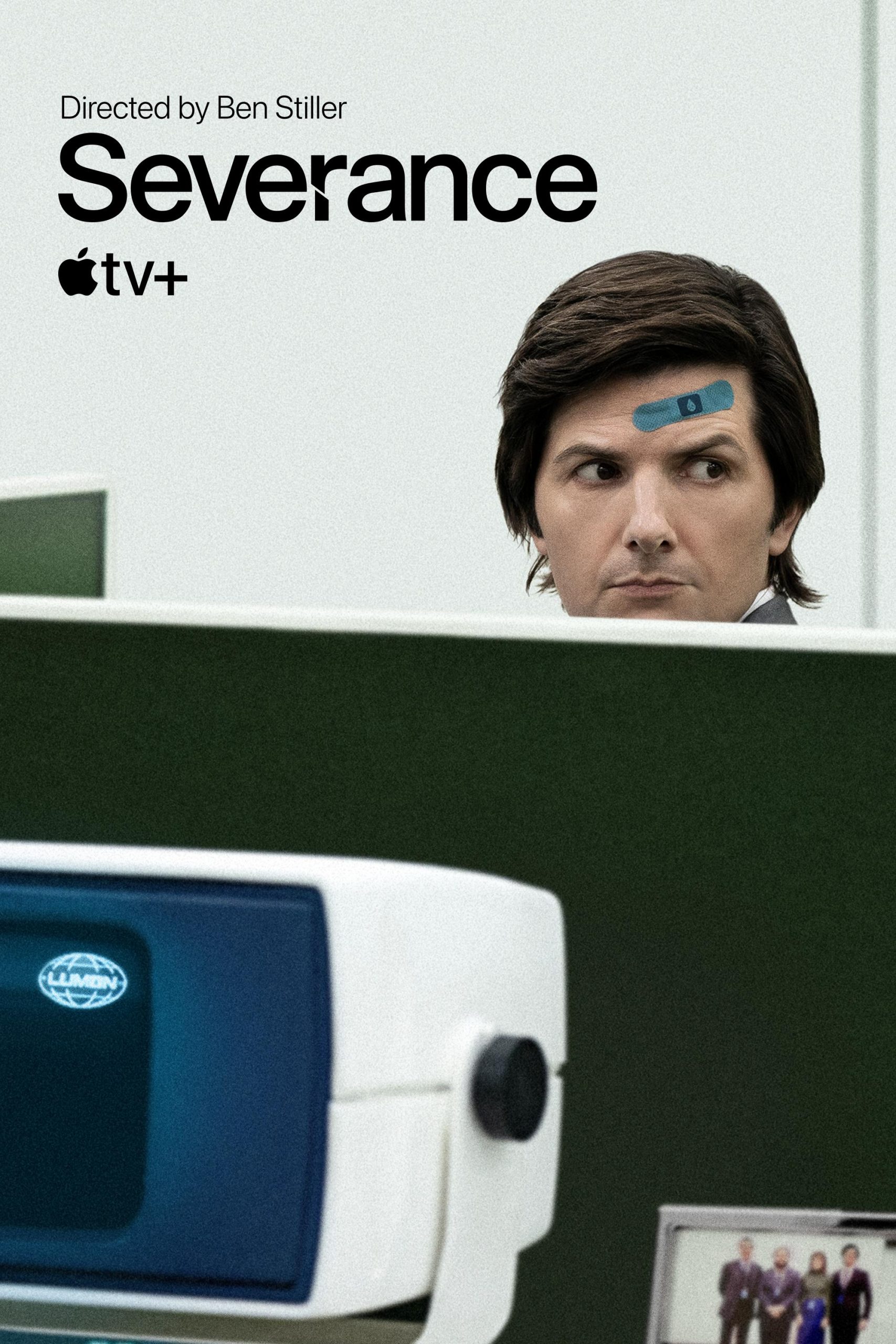 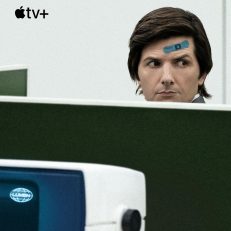 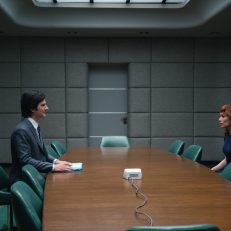 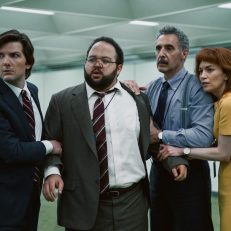 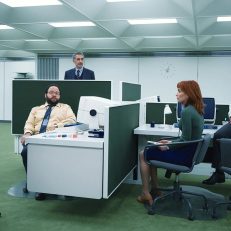 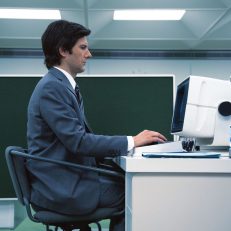