I have never missed an episode of The Simpsons. As we enter season 28, that becomes 600 episodes I have seen, many episodes multiple times. The annual Simpsons Halloween “Treehouse of Horror” episode is always one to look forward to, and since they began in season two, that makes this Sunday’s episode “Treehouse of Horror XXVII.”

The prologue begins with an unexpected Ivanka joke, proving The Simpsons are topical even during “Treehouse of Horrors.” Any appearance by Hans Moleman makes me happy. I only saw the “Planet of the Couches” couch gag in 2D, but even without Oculus, it is a fun, elaborate adaptation of Planet of the Apes. The credits always include fake Halloween names and check out James L. Brooks’ Halloween name this year. 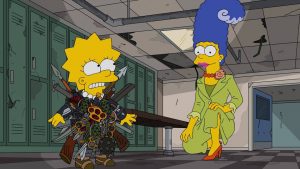 Mr. Burns introduces a Hunger Games-style contest in which Springfield’s children fight each other for a day in Burns’ personal reservoir in the all-new “Treehouse of Horror XXVII” episode airing Sunday, Oct. 16, (8:00-8:31 PM ET/PT).

The first short, “Dry Hard,” is a Hunger Games spoof with Lisa as Katniss and Homer as Hamish. His drink pun is good and it recurs in the next segment too. Two Peeta characters point out what a silly name that is for a fictional character, and I love The Simpsons’s dig on the Hunger Games two-parter. If you think it’s the same joke they made in The Simpsons Movie, just wait. They take it further and it is apropos of this and other YA franchises. Somehow it ends as Mad Max: Fury Road and it’s fun to see Simpsons characters doing the pole vault. Treehouse of Horror episodes have long expanded the definition of horror to include science fiction and fantasy like King Kong, Harry Potter and the classic three dimensional dimension, so it’s fun to see the latest post-apocalyptic movies get the Treehouse of Horror treatment too. 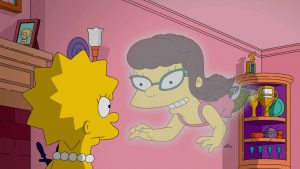 “BFF RIP” is an original, unless it’s based on something I don’t know, and it is a pretty clever and morbid tale. Lisa outgrows her imaginary friend who comes to life and starts killing her real friends. Bart wears a green shirt in exactly one shot for some reason. there’s a harmonica joke that’s so weird, I love it. It reminds me of the “slobbo” recorders we used to have in middle school music class. 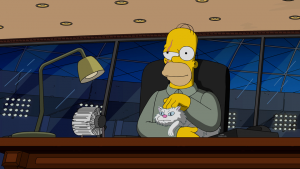 The finale, “Moefinger” is a Kingsman spoof with Moe as Colin Firth, with some James Bond in there too. Lenny and Carl’s Prague joke is Vaudevillian banter at its best. This story is a bit obvious, but worth it for the finale, a Goldfinger musical spoof with Simpsons characters swimming through the song, each with their own punchlines.

The Simpsons “Treehouse of Horror XXVII” airs Sunday, October 16 at 8PM on Fox.

I have never missed an episode of The Simpsons. As we enter season 28, that becomes 600 episodes I have seen, many episodes multiple times. The annual Simpsons Halloween “Treehouse of Horror” episode is always one to look forward to, and si...
0
Average User Rating
0 votes
Please sign in to rate.