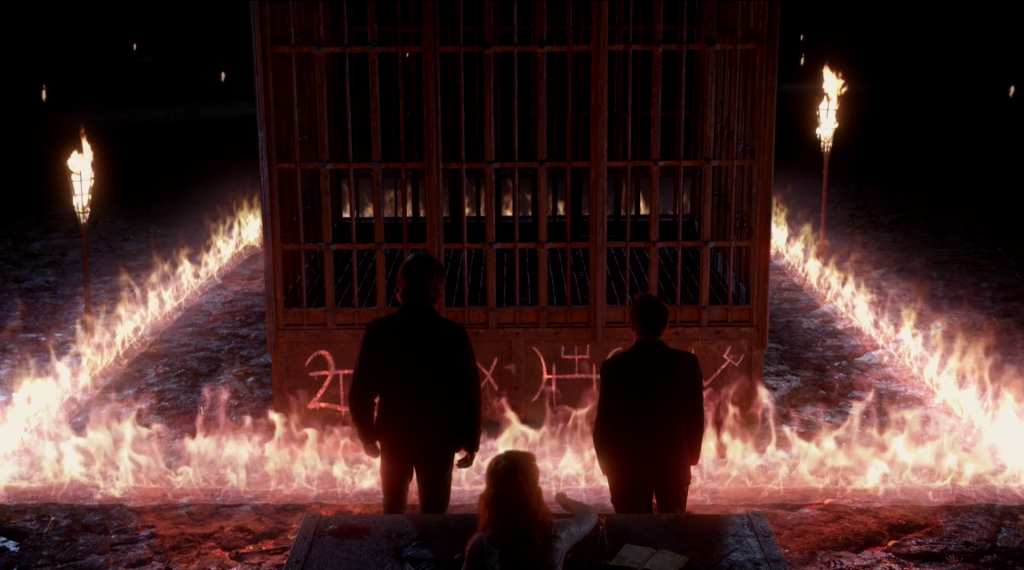 The midseason finale of Supernatural was intense.  It was jam packed with information, reveals and more questions.  While we do have our usual one liners and quips from some of our favorite cast members, it’s a rather intense and violent episode.  Amara is frustrated the her attempts to contact God have been unfruitful and is now throwing a complete fit  in order to get his attention.  Be prepared for an episode showcasing some of the destruction and devastation that The Darkness is capable of.

Our episode starts with a bang.  Amara’s in a park listening to a man telling people to repent of their sins.  Amara asks if he thinks God is really listening.  She then turns the fountain to blood and the heavens darken with an intense storm. The preacher asks if she’s God.  Her response is that He’s “not the only game in town.”  She proceeds to smite the preacher and the people in attendance.  After observing their charred remains she turns back to the heavens and yells “Well?”  Where is God and why hasn’t he put a stop to her tantrum? 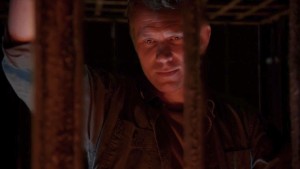 Sam has yet another vision of the cage.  This time Lucifer reaches out and touches his face.  Sam tells Dean that when Lucifer touched his face, he feels calm.  He feels like everything will be ok and that it has to be God because he’d never feel think this on his own.  He believes that Lucifer must know how to stop the Darkness because he was there when God did it in the first place.

They decide to talk with Crowley to see if there’s a way to safely speak with Lucifer in the cage.  They remind him that the Darkness will destroy even him and Hell.  Crowley tries to blame Dean saying she chose him and he couldn’t control her. That’s when they finally tell him she’s God’s sister.  Crowley thinks there may be a way to talk to Lucifer while keeping Sam safe.  They need to do this in a safe place where they can neutralize Lucifer’s powers.  Since the cage was sealed by God they’ll need information from the Book of the Damned and that means help from the one witch who hates them more than they hate each other, Rowena.

Amara ends up in a church looking for answers.  She asks the priest how to contact God and he directs her to pray.  When she shows frustration in his faith in God, the priest responds that they have faith because “God is the Light and the Light vanquishes the Darkness.”  This sets Amara off, she continues her rampage and destroyed a church, priest and parishioners.  When God doesn’t appear she asks if He sees the suffering of his chosen, his favorites and demands He show himself.  Meanwhile Angels have been meeting and plan to take Amara out themselves since God hasn’t intervened.  They believe rising up against her will keep them and the rest of God’s creation safe. 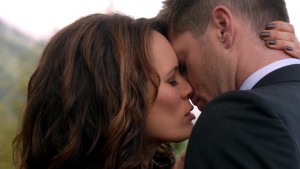 Dean heads to the church and Sam stays to keep an eye on Rowena while she works on how to safely allow Sam to speak to Lucifer.  Sam promises Dean he will not meet with Lucifer without letting him know.  Rowena is a little too excited to help them speak with Lucifer and get her hands back on the Book of the Damned.  Come on guys, you must know this is a huge mistake.  She seems to have an “ah-ha” moment but it still looks like she has a plan that Sam and Crowley are not privy to.  He tries to call Dean to let him know about the progress that’s been made but Dean doesn’t answer.

Dean senses Amara’s presence outside the church and heads to a nearby park and finds her there.  She mentions that he felt her presence and suddenly it appears they’re in a marsh, alone.  She tells Dean she’s trying to get God’s attention and his ignoring her which has forced her hand.  Her issue is with her brother, not his creation.  She can see the mistrust in Dean and tells him God was threatened by her.  He thought she’d make a more perfect creation than he did so he locked her away and passed down stories that she was a threat.  She says she can offer no rules, no pain, just bliss.  He asks her what she wants and she says everything. Dean tries to stab her and his knife shatters like glass.  She reaches out and it looks like she’s going to suck out his soul but then she kisses him.  Dean seems surprised and she tells him it’s their future.  They’re bonded because she set him free, it’s destiny.  He had the Mark and she is the original Mark, they will become one.

All of a sudden the Angels appear saying they’re going to smite her in one unified blow.  She kills the three angles that made contact.  Suddenly the skies erupt in a storm.  Dean says “He’s coming, He will smite you.”  She waves her hand at Dean.  He disappears and ends up back in the park.  It looks like she’s been struck by a ray of light or possibly the biggest lightning bolt in history.  Since this is the midseason finale, it’s doubtful she’s been vanquished.  If this was the multitude of Angels in the sky I’m sure it won’t do a thing and will only make her more angry. 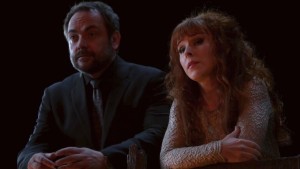 Sam, Crowley and Rowena head to Limbo.  It’s the far reaches of Hell where the unruly souls are sent.  Rowena puts some runes on a cell and recites an incantation.  Lucifer appears in the cell and seems to be surprised by the visit.  He’s definitely happy to see Sam.  Sam after all is his true vessel.  Sam tells him about the Darkness and about the visions God has given him.  Crowley leans over to Rowena and says he hopes that Sam doesn’t make a deal with Lucifer.  Rowena responds ad deal, even a painful one, may be the only option.  Seriously, why did they even trust Rowena.  Clearly she has other incentives than helping Sam, Dean and Crowley.  Lucifer reveals the visions weren’t from God.  They were from him.  When the Darkness was released, it caused fractures in the Cage and he could reach out to Sam through them.  He wants Sam as a vessel so he can get out of the cage.  Sam refuses, turns to walk away and suddenly all the safeguards fail.  He ends up in the cage with Lucifer and now has no choice.  Sam is trapped in the cage and it appears the only way out is as Lucifer’s vessel.

Amara is a petulant little child throwing a complete temper tantrum.  She has an obsession with Dean and expects the two of them to be together.  while we cannot refute the connection, it’s clear Dean will not willfully be hers.  She’s like a little kid destroying her older siblings things in order to get attention.  It’s no wonder God’s ignoring her but at the same point, if he doesn’t intervene soon, there may not be an Earth left to protect.  It is good to get more of her story.  I figured with this being the midseason, we would have more of her to set up the second half of the season.  They’ve done a good job keeping Amara mysterious thus far.

Dean is struggling with his connection to Amara and his mistrust with God.  He thinks God has left and doesn’t care at all.  If that were truly the case, I doubt Amara would be so intent on destroying His creation the way she has. In the little Dean says while talking to Amara, it sounds like he’s defending God.  Since Dean has this connection to Amara, it must be a blow to her that he still is so against her.

Sam has been having these visions all season about the Cage.  I was so hopeful at first it would be God giving them guidance.  I did start thinking it was too good to be true and I’m a little sad that be the case.  I was hoping for a portrayal of God watching out for the Winchester boys and guiding them through this horrible situation.  However, it is just like Lucifer to disguise himself as God and trick Sam into playing directly into his hand.  We know how broken Sam was by Lucifer after the first time in the Cage.  Being there a second time, he may never fully recover.

Crowley trusted Rowena.  Really Crowley, are you new to all this, why on earth would he trust her?  They thought they could control her by having her strictly supervised while she investigated the Book of the Damned.  No one else could read it so how strict could they be while watching her.  They don’t know what she’s doing, what she’s reading or what her plan is.  Crowley knows his mother better than anyone, he was a fool to trust her.

Our midseason finale was a much more serious episode than the past couple.  While we had our little quips and one liners here and there, but this episode was dark and had a lot of violence.  Amara is completely losing control, Dean is struggling with God and his connection to Amara, Crowley was a fool to trust his mother and Sam’s stuck in the cage again with Lucifer.  I was a little surprised that we had yet another episode without Cas.  Since the other angels were planing an attack on Amara, why didn’t Cas help, where is he?  Maybe he found God and is working with him on a plan to stop Amara. 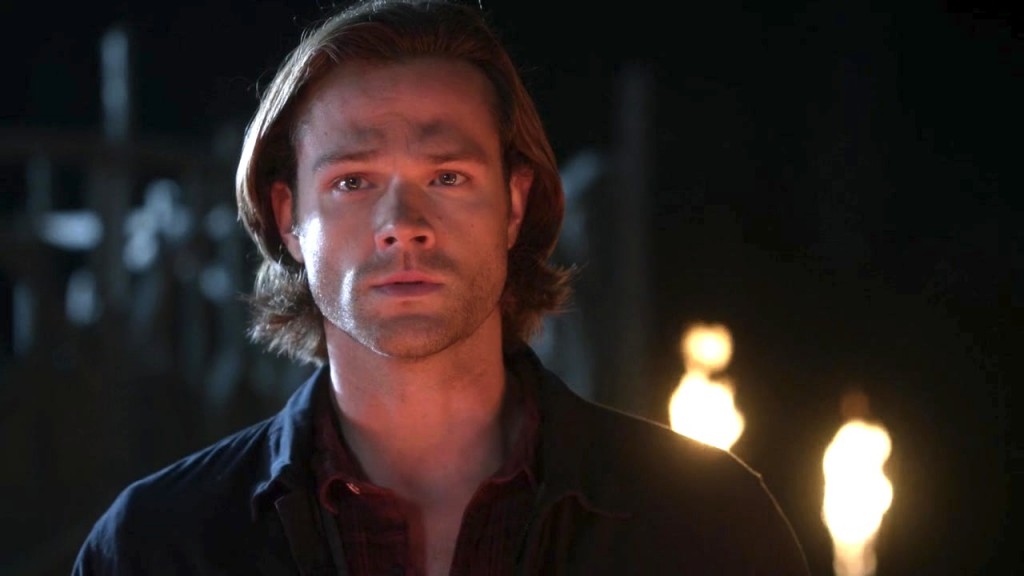 When I first started watching Supernatural, I did not trust or really like Sam.  Over the seasons, especially when he stopped chugging demon blood, he’s grown on me and I really care about him now.  Seeing him back in the cage with Lucifer and the single tear roll down his cheek made my heart break for him.  Dean is going to flip when he learns what has happened to Sam.  It was a good way to end for the midseason break.  It answers questions and gives you about 15 more.  We’ll see what happens when it comes back in late January.

The midseason finale of Supernatural was intense.  It was jam packed with information, reveals and more questions.  While we do have our usual one liners and quips from some of our favorite cast members, it’s a rather intense and violen...
0
Average User Rating
0 votes
Please sign in to rate.