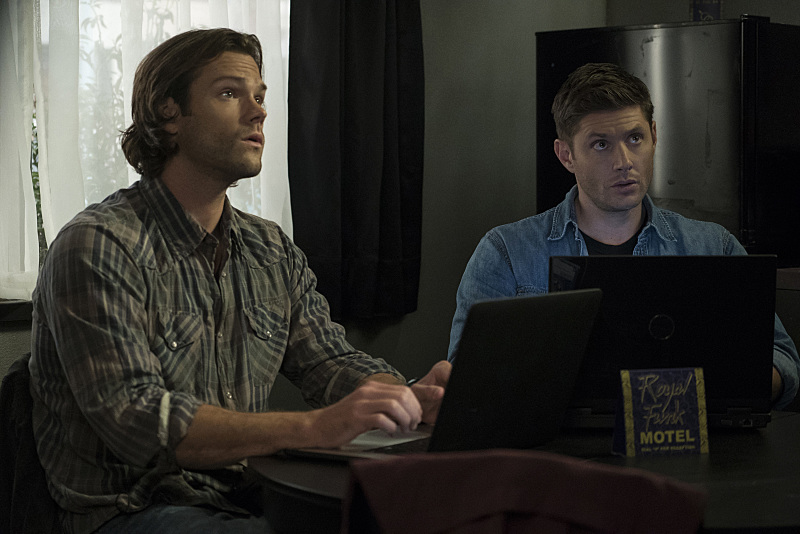 If there’s anything to be learned from Supernatural The Foundry, it’s if you hear a baby crying in a creepy abandoned house, maybe don’t go inside.  Stay outside, call the police, do what needs to be done.  Do not go in there unless you are a skilled hunter.  Maybe it’s years of watching creepy films and shows or an over all level of misgivings I naturally feel about anything strange, but here I was yelling at the TV “Are you crazy?!  Don’t go in there!!!!”  If only that couple in the beginning of this episode listened to me.  They would have made it to the end.  I have to say this episode piqued my interest quickly.  The real question was would it keep me in suspense to the end?

Back in the bunker, Mary is reading through John’s journal.  She strikes up a conversation with Cass and asks him when he started to feel like he fit in after leaving Heaven.  He still isn’t sure he does belong but he assures her that she does.  Clearly, Mary is having issues with settling into life without John, with her sons fully grown, and with them living the hunter’s life she wanted so badly to leave behind.  Sam and Dean have both come back from the dead, however, they were never gone as long as she was.  Not only did she lose her husband and time with her babies, but there has been a technological revolution since she’s been gone.  Her methods of research are now obsolete which must only add to her feelings of not belonging. 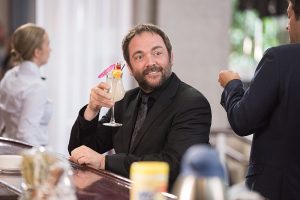 Having heard of an incident involving Vince Vincente, Cass heads out to find Lucifer.  He feels responsible having been the vessel that freed Lucifer.  Sam and Dean offer to help but Cass is intent on being the one to put Lucifer back in the cage and refuses.  On his journey to locate Vince, he talks to his bandmate who describes Vince’s strange behavior.  He also finds Vince’s sister who has been miraculously healed.  Along the way he meets up with Crowley who is also looking to get Lucifer back in the cage and get Rowena away from him.  Lucifer having control of a witch as powerful as her spells disaster for everyone.

Lucifer wants Rowena to make his vessel permanent.  This really could have gone either way with her.  I half expected her to do his bidding to stay on his good side.  I was pleasantly surprised that she decided to defy him.  Unsettling as it was to watch Rick Springfield decaying in front of our eyes, at least she banished him and didn’t give in to his request.  Lucifer treated her poorly and was constantly threatening to kill her properly this time.  Maybe that helped her realize he needs to be locked up.

Cass and Crowley arrive after Rowena has banished Lucifer.  They ask if she’d help them locate Lucifer and take him down.  She tells them she’s staying out of the fight but to call her if they need help getting him in the cage.  I was glad to see Rowena stronger in this episode.  She’s a fierce, formidable woman and it’s good to see her more confident in herself and her powers. I’m looking forward to a Castiel, Crowley, and Rowena vs. Lucifer showdown.

Mary decides to go on a hunt after hearing of the house in Minnesota where a couple was killed after going in because of hearing a baby cry.  Sam and Dean decide to go with her to make it a family hunting trip.  On their way the boys start to see things they have in common with their mom.  It’s interesting to see the ways you can be like a parent without even knowing it. 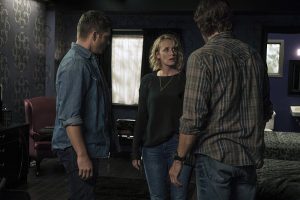 They stop at a gas station and Dean notices a motorcycle and comments on how nice it is.  This isn’t mentioned again in the episode and it may have just been meant as a side comment but the camera shows the bike and then to have Dean comment, it feels like this may be coming back in a future episode.  After all, at the end of the last episode Mick said he called Mr. Ketch and we saw him packing his guns.  Is it possible that Mr. Ketch has located the Winchester’s and is following them poised to strike at a moments notice?  I can’t shake the feeling that we’ll be seeing that motorcycle again.

In Minnesota they find out that the victims hearts were literally frozen solid when they were found.  They head over to the creepy house and encounter the ghostly apparition of a young boy.  Wanting to understand more, the boys investigate online and find out a lot of children who died in the house.  They head to the cemeteries and salt and burn their bones.

While they were out Mary called a previous owner of the house and learns about a little boy who died there.  It just so happened to be the same boy who grabbed her arm in the house.  She decides to head back over and that’s when everything goes pear shaped.  The boy is trying to show her something but then they’re interrupted by an adult ghost that attacks Mary and then possesses her.  I guess you’re not really a Winchester until you’ve been possessed and attack the people you love most.  With the help of the little boy ghost Sam is able to locate the adult’s bones and salt and burn them.  This stops the possession, eliminates the ghost and releases the kids.

Mary can finally admit to her boys that she’s mourning the loss of her husband and of her babies.  Like a true Winchester, she was hiding her feelings with hunting.  Telling both boys she loves them, she decides she needs to go on her own for a while and leaves.  Here you see the boys losing their mother for a second time. 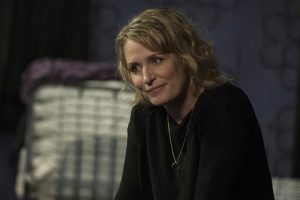 As a mother, you know this must have been a hard decision.  She misses her sons and they’re trying to tell her that they are there for her but she lost her babies.  The Sam and Dean in front of her are grown men and don’t need a mom the way they did when they were 4 and an infant.  For her it’s been a blink of an eye and she lost all that time.  It will be interesting to see her character development once she returns to the boys lives.

This episode gave us an eerie haunted house and the overall unsettling feeling that comes with creepy, ghostly kids.  It was very appropriate with Halloween approaching.  We also got was a doll that looks like it came out of someone’s nightmares and people freezing to death in a room that was 65 degrees.  Mary has finally come clean to the boys about her struggle in this world and decided to leave them.  So far we have Lucifer, the British Men of Letters, and Mr. Ketch all waiting in the wings.  It might not be a big bad like the Darkness or the Yellow-Eyed Demon, but there is something brewing and I’m starting to like where this is going. 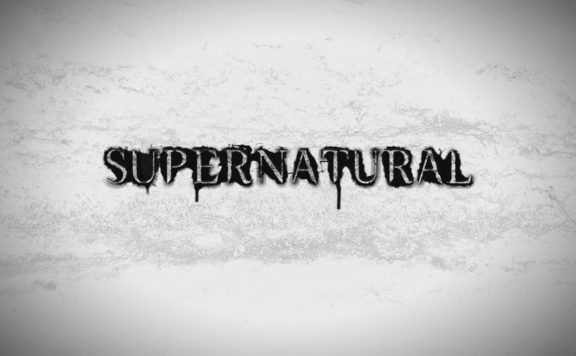 If there’s anything to be learned from Supernatural The Foundry, it’s if you hear a baby crying in a creepy abandoned house, maybe don’t go inside.  Stay outside, call the police, do what needs to be done.  Do not go in there unless you are...
0
Average User Rating
0 votes
Please sign in to rate.