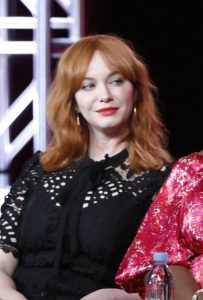 Christina Hendricks leads a trio of powerful women in NBC’s new drama Good Girls. Beth (Hendricks), Ruby (Retta) and Annie (Mae Whitman) are all underwater financially, so they decide to rob a grocery store. The store has more money than they are expecting, because it’s a mob front, thrusting the good girls deeper into the crime world than they ever expected.

Hendricks was on a Television Critics Association panel for Good Girls and stayed after to speak with reporters further. She also stars in the upcoming horror sequel The Strangers: Prey at Night. Good Girls premieres Monday, February 26 at 10PM on NBC.

WLE: Would you say any one of these three women is the leader? 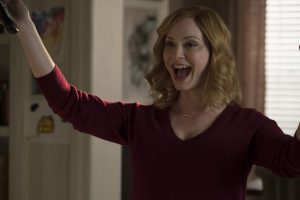 Q: Do you have a little bit of larceny in your soul?

Christina Hendricks: [Laughs] Oh no, it is not my inclination, no. It was a thrill to try it out, but scary. Not for me.

WLE: How did you like holding up the supermarket, kicking things over and waving guns?

Christina Hendricks: The kicking was the most fun. It was a long day and the guns were heavy. You had a ski mask on and we were there all day long. It was a very physical day but we had a blast. I’m always having fun with these ladies. 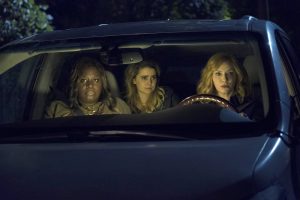 Q: The pilot must have been filmed before #MeToo but the scene where you confront the guy who assaulted your sister seems like it could’ve been written today.

Christina Hendricks: I know, I know. It is very timely, sadly. We’ve been in Atlanta shooting this and watching our industry and the country going through this wild process. Every morning we go into hair and makeup and look at the news and talk about it, but we did shoot it before all of this started going down.

Q: Was it important to you that it was a female led show?

Christina Hendricks: That was the bonus. Whenever I look for a project, I just want it to be beautifully written and an exciting character and great material. Just the fact that it was female driven was even more exciting to me, but I wasn’t going out of my way to find that. That was just an extraordinary coincidence.

WLE: In the second episode when you confront your husband’s mistress, is Beth also sympathetic for the young girl in that situation?

Christina Hendricks: I actually really love that scene because I like that she doesn’t put all the blame on this girl. It takes two to tango. She’s fixing the problem, making sure her problem gets away from her life, but she’s actually giving this woman an opportunity as well. She’s like, “You deserve more. You actually deserve more and you need to see that about yourself.” So there’s sort of a twofold situation there. I really like the way that scene’s written. 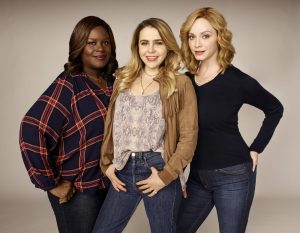 Q: Do you have women in your life that you have this kind of bond with?

Christina Hendricks: Oh gosh, yes. Now truly with these women, but I have a group of best friends that live here in Los Angeles that I’ve been friends with now, some of them, for 20 years. They are my family and my support system and I am extraordinarily lucky to have them.

Q: How do you know when that bonding is going to happen?

Christina Hendricks: Something just clicks. Some of those women I’ve met and been slow friendships. When I met these two women, I literally would talk about them nonstop. My husband’s like, “Give it time.” I said, “ I know. It’s really weird. When I’m not around them, my heart hurts.” I really am so bonded with them and it really was immediate. 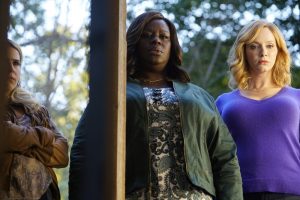 Q: Is it true a real robbery happened while you were filming?

Christina Hendricks: When we were shooting the scene where we were robbing the grocery store, there was an actual real person trying to rob the store next door to the grocery store. The cops had to come and everyone had to back up. It was a bizarre situation.

Q: What is the difference between the testosterone driven Mad Men set and the set of Good Girls?

Christina Hendricks: The material is so entirely different. Yes, it was testosterone driven but a lot of people called it Mad Women for a while too. There were some pretty powerful female characters on that. Just the tone of being on set here, we are laughing all the time. It’s so much fun all the time. It’s super professional. Everyone knows their lines. It’s super serious but in between there’s lots of giggling and laughing and playfulness. 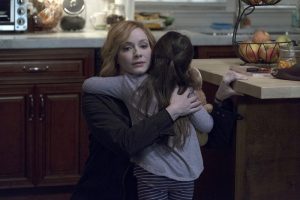 Q: How different is being the lead than a supporting role?

Christina Hendricks: I’m a lot more tired. I’m exhausted. We work really long days and, especially me, but really all of us are in almost every single scene every single day so we’re tired, but it’s good tired.

WLE: Are you under attack in The Strangers: Prey at Night?

Christina Hendricks: Everyone’s under attack in a Strangers movie, unless you’re the attacker, but they all wear masks so yes.

WLE: How intense was The Strangers? 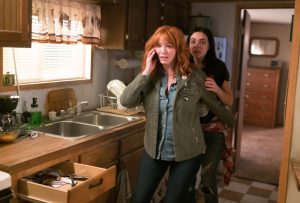 Christina Hendricks and Bailee Madison run from The Strangers

Christina Hendricks: It was actually very intense. I have a scene where after they said cut, I just started crying because it was so terrifying to me that I couldn’t shake the feeling in my body. I was laughing and crying at the same time because I knew it was absurd that I was crying, but I still couldn’t shake it. I think it’s going to be scary. I haven’t seen it yet but I hear it’s good.

Q: Do you draw on Joan in life and in subsequent roles?

Christina Hendricks: I learned so much from Joan and from Matt’s writing of Joan and getting to play that woman and people’s response to her. She really had a beautiful following. People really felt empowered by her and women still come up to me all the time and say, “Thank you for the portrayal of her. She made me feel this about myself and that” I couldn’t be more proud to have played her and she’s out there in the universe. Some people are watching Mad Men for the first time and getting to experience her for the first time. It’s fun when new people still get to discover it.

Q: What do you do when you get time off? Do you have date night?

Q: What’s the first award you ever won?

Christina Hendricks: I may have won a spelling bee. I don’t remember. We weren’t very award-driven. It’s all about the journey, right? 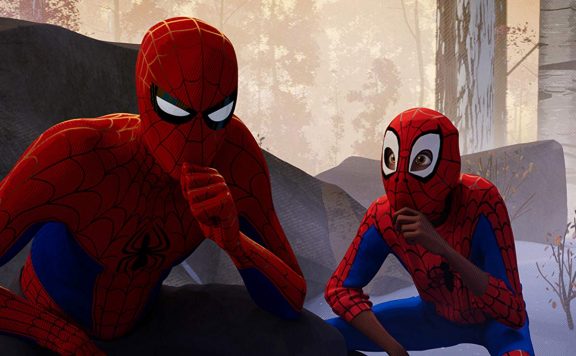