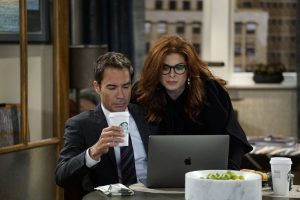 Will & Grace are back this week with their friends Jack and Karen. The four stars and two creators, Max Mutchnick and David Kohan were on a panel for TCA previewing the return of the series which has already been renewed for another season.

The new season will be set in the present day, but before the events of the previous series finale. After the panel, we joined reporters speaking with Debra Messing. Will & Grace returns Thursday, September 28 at 9PM on NBC.

WLE: How do you feel about taking a step back from the finale? 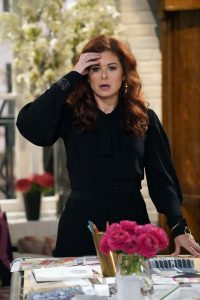 Debra Messing: I love it. I love it because it just opens everything up to possibility. My understanding is that Grace is very successful as an interior designer and she is very proud and content with that and her place in the world. It’ll be interesting just to see how her personal life progresses.

Q: Did you ever think Will & Grace would come back?

DM: Never, never, never in a zillion years because it was 25 years ahead. I always said, “You can’t do anything until we’re in our 70s and we can do the geriatric Will & Grace. I’m in for that.” Golden Girls is still genius and I was like I could see us doing that.

Q: Having done other genres since the finale, what was it like to get back to sitcom acting? 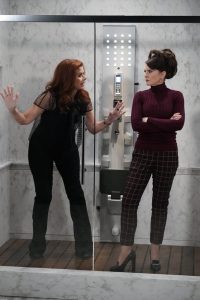 DM: Exhilarating and terrifying at the same time. I grew up on I Love Lucy and Carol Burnett and Julia Louis-Dreyfus, great physical comediennes. I’ve missed it desperately from the landscape of television for many, many years. To be able to have the opportunity to step back into that is just the greatest thrill. I’m ready to fall down and trip and do all those things again.

Q: Is the chemistry the same? What dynamics have changed?

DM: It is absolutely the same. Next year will be 20 years since the pilot. It is just like it was11 years ago. We really are brothers and sisters. We can’t keep our hands off each other. We are happiest when we are totally inappropriate with each other. We make each other giggle. I think that is the thing that I am looking forward to the most.

Q: How will you celebrate the Will & Grace return pilot? 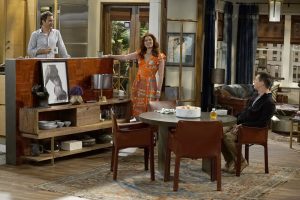 DM: I’m just wondering if NBC will get us cars again, right? Doesn’t that make sense? That makes sense, right? You know, if we want to be a little bit more subdued, maybe a Vespa. Pink Vespas would be really nice.

Q: Do you feel any pressure with the expectations for Will & Grace?

DM: I don’t feel pressure because I’ve read the first episode. I think that we walked away so proud of the eight years that we did. When it first came up, the idea of doing it again, it’s like wait a second. We have to make sure there are stories to be told. We have to make sure that both comic voices can live again even louder. Max and David were like, “We have so many stories already. We are ready to go.” We read the script and it was like okay, there it is. It is back and now it’s just a matter of playing. 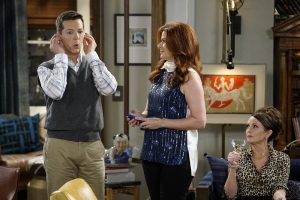 Q: You had to read the stories before you made the decision?

DM: No, we didn’t read anything. We had done the political skit for the campaign. It was a nine minute little skit. Just doing that made us realize that there is a kind of magical synergy between the four of us that just is there. The writing is so smart and funny and relevant. I think that gave us all the confidence to say okay, will this work in everyone’s lives? If it does, then by all means let’s dive into that. 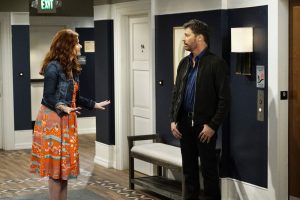 Q: Since it was the campaign skit, did Donald Trump actually help bring Will & Grace back?

DM: The campaign season between Donald Trump and Hillary Clinton absolutely was the catalyst for us coming back. If that election did not happen and it was a different kind of campaign season, we would not be here right now.