We spoke with Totah after his Television Critics Association panel for Champions. A standout in the Sundance hit Other People and in Glee, Totah now gets to be the star of the show. Champions premieres tonight on NBC.

WLE: Do you have a fairly normal childhood right now?

J.J. Totah: Yeah, I do. I actually go to a real high school. I have friends who are not actors.

WLE: What year are you in high school? 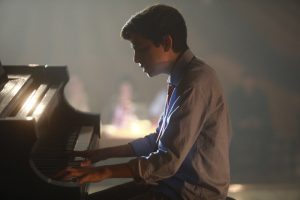 Q: Was the goal to do Broadway?

J.J. Totah: My sister kind of took that place. She was in the Broadway production, touring, of Whistle Down the Wind when she was seven. So I wanted to do the opposite of her. I wanted to do more film and television, but obviously if that was an offer I’d jump on it immediately.

Q: Did you get Glee because you could sing so well?

J.J. Totah: I auditioned and I sang when I did Glee so I don’t know.

Q: Did you feel like part of the Broadway world doing Glee?

J.J. Totah: 100%. It felt like I was workshopping a Broadway show every single day. Those guys worked so hard. I can’t believe they did it for seven years. I was only there for four months but it was still super hard. 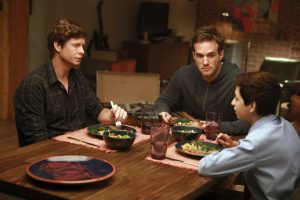 Q: What do your parents think of your role on Champions?

J.J. Totah: Oh, they love it. They’re so proud of me and they’re so excited to see an LGBT character on a network comedy because there are not a lot of them. Everyone’s really excited. They love the script. My family loves me. Hopefully, I think all of them do. There might be some cousins who are a little iffy about me. No, I’m kidding.

Q: What do your high school friends say about you getting a show?

J.J. Totah: They’re obviously happy for me but by the same token, they don’t really care. They don’t think of me as anything special. They just think I’m a normal kid who goes to school and they’re all really nice to me. 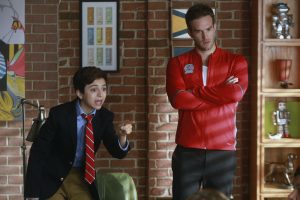 Q: Are they trying to get a part on the show?

J.J. Totah: Not at all. Everyone in my school are trying to be doctors, scientists and lawyers. They’re like, “You do your television and we’ll stay in our circle.”

Q: You’re already fairly established. You were named a breakout star at Sundance two years ago.

J.J. Totah: This is not my first thing. I’ve worked up to this and I’m very fortunate to get this but it’s still all very new. I’m feeling so fortunate about everything.

J.J. Totah: In Other People? Oh, he was insane and that was the best gift anyone could give to me, the head of SNL writing me that scene and being able to just do it as a sketch was just insane. It was so cool.

Q: People were losing their mind at Sundance.

J.J. Totah: That was the best experience of my entire life. I’m not even kidding. That changed me. 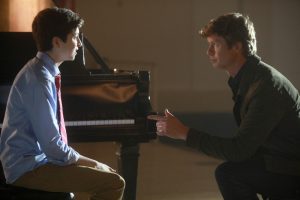 Q: Will you do TV and film even if you can’t sing in it?

J.J. Totah: Acting is my first love. I just love that but I love all forms of entertainment honestly. So I’m down to do anything. I mean, not everything, but anything. Whatever that comes with doing a film, television show or Broadway show, whatever I have to do I’m totally game for, but I just love acting.

Q: When did you start acting?

J.J. Totah: Well, my first thing was the Disney show. Like I said, my sister is very involved in acting. She got into UCLA in 2012. We came down to move her in and that’s when I started taking classes and ended up auditioning.

Q: How much older is she?

J.J. Totah: My sister is seven years older than me. 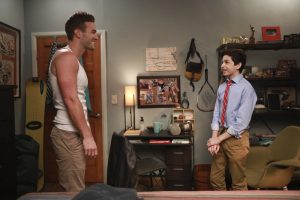 Q: Is she still in the business?

J.J. Totah: No, she’s not. She went to UCLA for biology and psychology and now she’s a recruiter for a tech company in San Francisco so we don’t know what she’s doing but she’s loving life. She gets free massages, Soul Cycle with her job.

Q: Might you try another career in the future?

WLE: Why was Sundance the best experience of your life?

J.J. Totah: Because it was life changing. I literally got out of an airport, and I didn’t know this was a thing. If you have a film at Sundance, they take pictures of you at the airport. And I looked so bad, like I was homeless, not dressed properly, wearing like my seven-year-old clothes because I’m so small I still fit into that. There was just people taking photos of me and it was like oh, do you think I’m someone else? What’s going on? I was really confused. It was that and the fact that I got to experience so much good feedback from something that I’ve done. That’s never happened before. It was so visceral and so in the moment that I got immediate feedback. It was so cool.

Q: Are you involved with any charities?

J.J. Totah: I am. I work with GListen, GLAAD and The Trevor PRoject which is where I performed at. I read some of the hotline messages that The Trevor Project receives, of people who are feeling depressed or have anxiety and stuff. I’m very much involved in those LGBT communities but they also work on people who have mental illnesses and help those people.

Q: As a role model, do you feel the positive impact you can have?

J.J. Totah: 100%. I feel very proud and very privileged to be a part of this show. Even to have this character is so cool. We had so much fun making it. However anyone perceives it, of course I want them to all love it, but at the end of the day, I have such awesome people surrounding me and such a great company to be in that I’m so happy to be a part of it.