GLOW has been on Netflix for two seasons now, but the first chance I ever got to meet the cast was at this summer’s Television Critics Association panel. Netflix brought Alison Brie, Betty Gilpin, Sydelle Noel, Britney Young, Kia Stevens, Jackie Tohn and Britt Baron to the TCA for a panel, a month after season 2 premiered on Netflix.

Here’s a moment with each of the stars of GLOW. 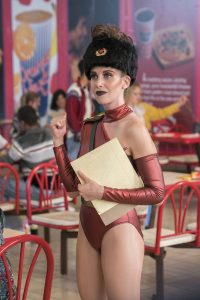 Alison Brie: “I don’t think there are many differences between women’s and men’s wrestling. We certainly never approach wrestling in that way. Probably the biggest difference is breasts. We have a male wrestling coach, Chavo Guerrero Jr. who’s been training us for two seasons. And we also have female stunt coordinator Shauna Duggins and female stunt artist Helena Barrett. So we have the male and female perspective on wrestling while we’re learning it. Chavo teaches us the moves and then Shauna and Helena kind of translate that into women’s bodies. I think it’s less about male wrestling versus female wrestling and more about ’80s wrestling versus contemporary wrestling. So today you find a much more polished performances going on in wrestling and what we’re doing on GLOW was a bit more scrappy. The women of GLOW, like us, we’re actresses learning how to wrestle. Most of them were not wrestlers before they started shooting the show, so you see a lot more hair-pulling, a lot more really raw moves. You see the hair mares and things like that that wrestlers still do today, but when they do them today they just pack a little more punch. The showmanship is a little bigger. There are more moves that have been created since the women were doing the show in the ’80s. When we watch contemporary wresting, I think sometimes we get a little disappointed because we come in like, “I wanna learn how to do this!” And Chavo’s like, “That move wasn’t created till 1992. It’s not gonna make any sense.” 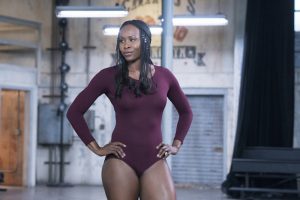 Sydelle Noel: Everything Alison says is true. However, being a woman’s wrestler you have to shine in a shorter period. You have to make a point faster because maybe the promoter won’t give you as much time because you’re the women wrestlers. You’re the popcorn match as they call it. So maybe you’ll get two minutes while the men get five and, in that two minutes, you have to tell a story and make a point and make yourself a star in two minutes. So I would say the difference between women and men wrestling, women have to endure so much more to make it.” 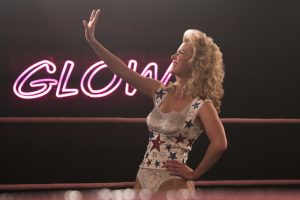 Betty Gilpin: “I really relate to Debbie in a lot of ways, as a woman and actress, and from watching my friends become mothers. I guess I see this part of them that you sort of connect to your Greek self. Maybe everyone feels this way, that there’s this tiny part of you that thinks, oh, maybe I could be powerful and maybe I could be special and loud and a thousand feet tall if someone gave me the opportunity to. And then Debbie feels that way, and then her job for the day is to paint her nails and put on a nice outfit. And all this thousand-foot-tall feeling gets crammed into this very small posing package. And I think she’s just done with it and is ready to explode. I think wrestling has given her an opportunity to feel a thousand feet tall if only for five minutes. But I think that a trait that a lot of the characters share is that, even though we’re all very different, I think a lot of us are very lonely and feel like our lives didn’t go the way that we thought they would. And that ‘GLOW,’ the show within the show is this sort of weird island where we get to pretend to be the warriors we thought we were gonna become when we were little girls. And then we’re all going back to our houses crying in our bathrooms. But I think that that warrior self that they’re finding in the ring is slowly bleeding into their personal lives. I think Liberty Belle has made Debbie a stronger Debbie at the grocery store and at work as a producer.” 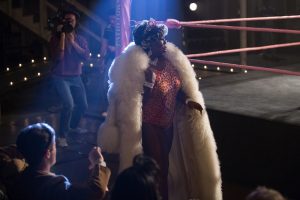 Kia Stevens: “I could totally relate to Tammé because what she went through parallels what I went through in wresting. When I first started in wrestling, I was asked to take the name of Amazing Kong. And me being black and being named Kong was a problem for me. However, I chose to take it and make it mean something of respect so anyone in wresting that knows that I am Kong, they respect and fear that name. However, there were days where it was like, ‘How’s my family going to react to me playing this Kong character because when I’m in there, I am serious like I would think I am Kong and what is Kong and how are they going to receive that?’ However, they were extremely supportive, but there was that moment of ‘Oh god, what do you think of me doing this? What do you think of me banging my fists like this like a gorilla? What do you think and what’s going on?’ But we worked through it. People respect Kong and I love that. And I am now in the position in entertainment, or at least working there, to make sure girls like me never have to make that decision again. So I’m trying to open up the road. If you want be a Kong, you be a Kong for your own reasons, not because you feel you have to.” 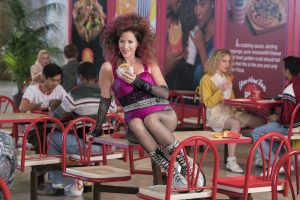 Jackie Tohn: “I think as far as injuries, our team takes such good care of us, I mean there’s little things that happen. Like, I hurt my ankle in Season 1 which was actually just, now looking back on it, kinda funny. I went to the hospital just to check on it and I was like wheeled in in my full Melrose Sequins and I just literally looked some someone picked me up off the street. I had like glitter glued to the side of my face and I was like just crying and I was like, ‘My ankle!’ Everything else was like choreographed to an exact T. This was supposed to be just like a casual sort of like fake thing and one of us fell and it was like nothing. But we take really good care of each other, I think is the bottom line.” 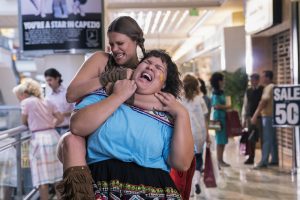 Britney Young: “I think for me, Episode 8 was the biggest trust amongst the cast for myself because I remember the first scene I shot was the jazzercise scene. And I remember going in and being like, ‘Okay, how would Carmen play Machu Picchu really? Like, I’m just gonna do this.’ When Nina, our director, yelled ‘action’ and Betty Gilpin turned it up to 14, that’s when I knew all the things that I had been trying at home and was like, ‘That’s too big. I got to be grounded. I got to bring it down a level.’ I then was like, ‘Oh, my God!’ Like I knew at that moment I could go as big as I wanted to and would have 15 women as big as well. All the wrestling, all the trust falls we’ve done, it was nothing compared to 208, looking over and just seeing this face amongst everyone. So it was a special episode.” 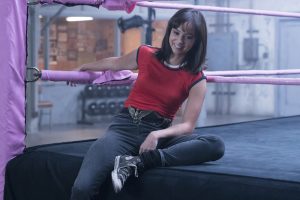 Britt Baron: “I think the writers are so smart in the sense that they write for all of our strengths. Episode 8 was such a great display of like Jackie, you got to do your music video. Sunita and Shakira who are dancers got to have a whole dance sequence. Like I think it’s such a unique show where who we are outside of GLOW has kind of morphed into the onscreen personas in a way.”

TCA: Meet the Cast of GLOW