Last week’s episode of Timeless ended on a huge cliffhanger. Will Rufus and the team make it back in time for Rufus to be saved? What will become of them if Rufus dies before they make it home? We see Flynn back with his family and some endearing moments that almost make feel sorry for Flynn. He is woken from his dream by Emma and informed them that all the men have quit and don’t want to do the mission. The team makes it back in the time machine and Rufus is alive. Rufus has lost a lot of blood and they debate taking him to a hospital. Lucy calls her fiancé, Noah to help them and is very upset that Lucy can’t tell him what she is really doing. He assumes it is because of Wyatt but she decides to break up with him instead. They got Jiya and Agent Christopher to help them. Flynn has made the jump to 1954 and is trying to get to Rittenhouse. The warehouse is suddenly surrounded and Jiya, Rufus, Wyatt and Lucy must jump in the time machine. Agent Christopher stands there waiting for them to arrive and she is arrested.

The team makes it to 1954 and they have to figure out what to do next. They leave Rufus and Jiya with the lifeboat. Flynn is with Joe McCarthy trying to persuade him to give him the location of the Rittenhouse meeting. McCarthy gives it up to Flynn and in turn, Flynn tells McCarthy that they are communist spies sent to interrupt the McCarthy trials. Lucy is in a room alone and Flynn walks in to tell her that he plans to kill her grandfather. He doesn’t know what that means for her future or what will happen to her. Lucy tells him that he needs to stop the bloodshed. She says she will help him stop Rittenhouse but not like this. He tells her goodbye and leaves the room.

Wyatt is locked in another room when McCarthy enters the room to interrogate him. Wyatt will not be broken by him and remains very calm. McCarthy starts to laugh and sends the men to attack him. Wyatt pulls some bad ass moves and breaks them out. They head their way to the summit to try to stop. 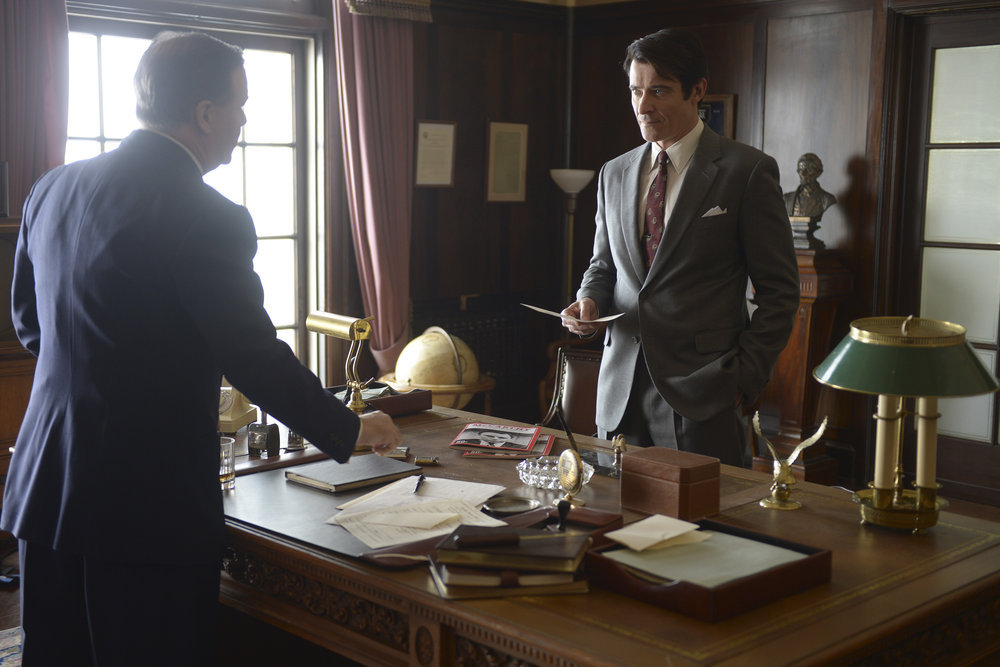 Mason comes in where Agent Christopher is being held and tries to break her out. They head to the computers, where Mason shows her all the information about Cahill and how they can stop him. Mason has a change of heart and decides that he needs to help Rufus because he deserves better.

Rufus and Jiya are hiding with the time machine when Jiya passes out and Rufus holds her. He tells her that he wanted to tell her that he loved her. It seems that Jiya is suffering from issues related to traveling with another person int he lifeboat and she appears to have a seizure.

Lucy, Wyatt, and Ethan head to the Rittenhouse meeting. They talk about how he struggles with being gay and how he was pushed into Rittenhouse and didn’t want to be a part of it. As they approach the house, Ethan tells them where it is. They have Ethan distract the guards so they can get into the basement. They see Flynn wiring it with explosives when Lucy jumps in between them holding guns. Lucy tells Flynn she wants to help him. She tries to appeal to his human nature. This is a truly emotional moment between Lucy and Flynn where they are trying to figure out what to do. Lucy says they need to focus on the present and that she knows what to do.

They head back to the lifeboat and Lucy says she must go with Ethan and Flynn while Wyatt and Rufus get Jiya back save her. Wyatt and Lucy stare longingly at each other and for a moment, look like they may kiss. To all our dismay, they don’t. Lucy tries to get Ethan to help them stop Rittenhouse and stay a double agent his entire life. 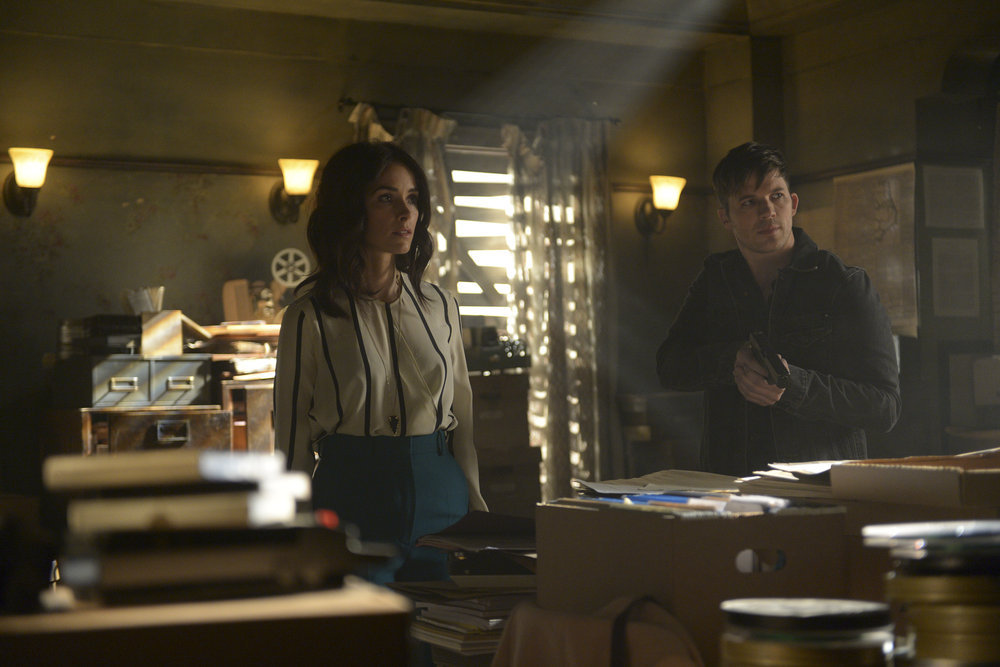 Back in 2017, Lucy goes to visit Ethan with Wyatt. He says he thought he dreamed everything and wanted to run. He asks her if she wants to know if he did what she asked and she tells Wyatt to get the clock. Inside the clock is a piece of paper. On the paper is an address and a combination code. Ethan kept files on Rittenhouse and built an entire case. They are interrupted by Mason and Agent Christopher who are only there to help get Rittenhouse. Jiya and Rufus are in the hospital and she tells him that she heard everything he said and she loves him too and they kiss. Jiya starts to have another seizure and during it, it appears that time changes and she mentally travels through time.

Agent Christopher heads back to Mason Industries to oust Mr. Cahill and Mr. Neville. Flynn and Lucy meet up to exchange information and give him all the information about who killed his family. Flynn must give back the time machine. He gives Lucy back the diary and all seems okay until Agent Christopher comes and arrests Flynn. Back at Mason Industries, Agent Christopher tells Lucy and Wyatt of the progress they’ve made and that Flynn will face trial. She also allowed for Lucy to have the lifeboat and be able to travel and save her sister. Wyatt and Lucy say goodbye and hug but Wyatt says he can wait to go back to Pendleton and will stay to help Lucy get her sister. Wyatt tells Lucy he isn’t ready to say goodbye yet and he should be open to new possibilities. Lucy leaves and says she will return in an hour and goes to speak to her mother. She tells her mother about everything that has happened and that she plans on getting her sister back but may lose her mother in the process. Her mother says Rittenhouse would never allow her to take the lifeboat to make her sick and get some girl no one knows. Rittenhouse is getting the mothership and they plan to change history.

What a way to end the episode. The show is taking a new direction with Rittenhouse at the helm of the mothership. We are left with so many questions. Shocked to learn that Lucy’s mother is Rittenhouse as well, I am totally confused as to what can possibly happen next. Whatever is happening with Jiya is crazy and new and can she mentally travel back in time now?

What is this insanity and what are you doing to me TIMELESS!? I’ll just sit here anxiously awaiting the next episode.