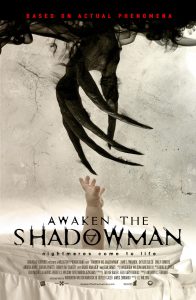 Could it be that Jean Smart had never done a horror movie before? When I saw she was in Awaken the Shadowman I tried to think of one, and it turns out this is her first. For the versatile star of Designing Women, 24, Fargo and Legion, it’s about time she use her skills to terrify us.

If you’re in Los Angeles, Awaken the Shadowman opens Friday, July 21 at the Laemmle Monica Film Center. It’s also on VOD July 25. I got to speak with Smart by phone about her latest role, and what’s coming up for her on FX’s Legion.

WLE: How did you approach playing such a mysterious character who is the subject of the movie but so little is known about her?

Jean Smart: That’s always kind of fun to have your entrance be set up by everybody else. Also too, the relationship with her sons is kind of odd and strained, but then again she’s changed since they last saw her. I’d never done this kind of genre before and I’d worked with Skyler [Caleb] before. I think he’s terrific so it seemed like fun, although I don’t like watching movies like this because they scare me. I’m too impressionable.

WLE: Did making a horror movie help you at all, showing you how it’s done so you can watch them now?

Jean Smart: Oh, I think so. Especially that one. I did a little research into the Shadowman phenomenon, a lot of people who claim to have had personal experiences like that which is just horrifying to me. I started doing the research but it’s hard for me because I’m just too impressionable. I want to be able to get up in the middle of the night and go get a drink of water and not feel uncomfortable. I mean, I can watch Alien and it can absolutely paralyze me with fear but it doesn’t last with me. I don’t think one of those creatures is under my bed or going to jump out of the shadows at me. Things like this, which seem somehow more real or plausible, I find that absolutely chilling.

WLE: Is it that the Shadowman is more psychological than a creature?

Jean Smart: Yes, I think so. It’s like people who say they’ve had experiences with seeing ghosts or they’ve had a loved one who has passed and then contacted them. I miss somebody. I’m not sure I want them to show up in my bedroom at two in the morning. Give me some warning. I guess it seems too possible because I don’t discount those kinds of things completely, but like I said, I don’t expect the creature from Alien to show up in my house anytime soon.

Jean Smart: I suppose just in the sense that special effects and things like that, it’s fun because it’s new but you can see how it’s difficult. You have to act up a storm sometimes when there’s something that you’re relating to that actually isn’t there. My hat is off to people who have done a lot of that kind of work with green screen and things like that where they actually have to pretend that there’s something there that they’re relating to that will be put in tater.

WLE: Was that the case on Shadowman also?

Jean Smart: Not for my scenes. I guess one of the scenes towards the end but the Shadowman himself, even in person, he was pretty scary. That’s not a special effect. He’s real.

WLE: Did you have a different approach to the flashback to the performance of when we meet your character today?

Jean Smart: You want to show that there had been some kind of relationship there, that she’d been a normal mom. That in itself would be pretty unnerving to have a parent have that relationship change with you, and somebody start treating you in a strange way. So I felt like the flashback was very important for that because since we don’t see her that much, you don’t want people to say, “Who cares? We don’t have any stake in that at all.” 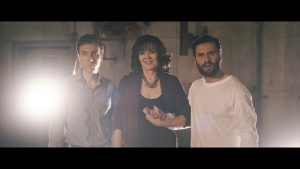 WLE: How did you get involved with Awaken the Shadowman?

Jean Smart: Well, Skyler asked me to do it. I had done I think two other projects with him. That was the second or third time I played his mother. I have a lot of admiration for him. Very resourceful young man.

WLE: It was the director’s first feature. Were you impressed by how he put this together and worked with you?

Jean Smart: I was impressed. Working with a first time director, you can wonder if they’re going to be able to steer the ship but he seems quite comfortable. Sometimes that’s all it takes is for someone to, if nothing else, act like they know what they’re doing. It imparts confidence to everybody but no, he seems to be enjoying it very much. It seemed to work out really well.

WLE: How many days did your role entail?

Jean Smart: Oh gosh, it wasn’t a lot. I think it might have been three.

WLE: Was it towards the beginning or end or in the middle of when everyone else was working?

Jean Smart: I know that they’d been going for a little while.

WLE: With your roles in Fargo, Legion and Awaken the Shadowman, has the industry gotten to see a new side of you and opened new doors?

Jean Smart: I think Fargo was definitely a bit of a game changer for me. 24 was as well but I think Fargo even more so. It was one of the highlights of my career in my opinion. Everything about it was an outstanding experience. I feel like I owe a lot to Noah Hawley. I can’t say enough good things about him.

WLE: Do you know what you’re going to get to do in a second season of Legion?

Jean Smart: I just yesterday read the first episode of the second season which we will not due until September. There’s definitely specifically a change in her and her life. Noah and John Cameron, our producer, we’re having lunch together next week to talk about where it’s going and what’s happening. I’m so thrilled to be shooting it in L.A. I still keep pinching myself thinking they’re going to say, “Oh gosh, we crunched the numbers and it’s just not going to work out. We’re going back to Canada.” I love Canada but I have a husband and two kids and a house and two dogs. It’s just difficult.

WLE: Legion is so surreal, do you have questions every week?

WLE: When you learned that two episodes were all within the one moment of the gunshot, what did you think of that?

Jean Smart: We were ready to ceremoniously burn that room to the ground. We all say hey, we are so lucky to be here and doing what we’re doing. We’re all pretty happy campers.

WLE: What other roles will we see you in coming up?

Jean Smart: I did a movie I’m really, really anxious to see how it comes out, called Life Itself with Olivia Wilde, Mandy Patinkin, Antonio Banderas, Samuel L. Jackson, Oscar Isaac, Olivia Cooke and Annette Bening. It’s just an amazing script about those little moments, scenes, an interaction with a stranger or a moment you have sometimes, how it leads you and suddenly your trajectory changes. Was that fate? Was it a conscious choice? Sometimes it’s very frustrating and dark sometimes, but then ultimately if indeed you believe that there’s some kind of fate that we’re all destined for, ultimately it’s really a beautiful thing. It’s quite moving and very, very entertaining. It’s a very clever script. I shot that in New York two months ago.

I just finished a little movie in Palm Springs with William Shatner and Christopher Lloyd which was great fun. It’s a romantic comedy and I play Bill’s girlfriend. I love him. It’s called Senior Moment. That was a lot of fun.

WLE: Would you go to a theater and see Awaken the Shadowman with an audience to see how they react?

Jean Smart: Oh sure. I’m hoping people will get the pants scared off them.