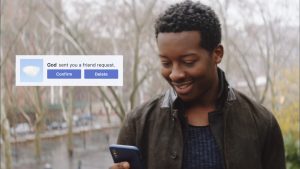 GOD FRIENDED ME stars Brandon Micheal Hall (pictured) in a humorous, uplifting drama about Miles Finer (Hall), an outspoken atheist whose life is turned upside down when he receives a friend request on social media from God and unwittingly becomes an agent of change in the lives and destinies of others around him. Photo: Screengrab/CBSÃÂ©2018 CBS Broadcasting, Inc. All Rights Reserved

CBS is offering a preview of their new fall series God Friended Me today. You can watch the pilot episode online, on social media or streaming at CBS All Access or CBS.com ahead of its September 30 network premiere.

Brandon Michael Hall plays Miles Finer, an atheist podcast who begins to get friend requests from God. At TCA, executive producers Steven Lilien and Bryan Wynbrandt said God Friended Me would only deal with the Lord’s social media activity. Satan will not be messaging Miles.

“You mean our spinoff series, The Devil Friended Me?” Windbrandt joked. “The devil would probably be on Twitter, I think.”

Lilien added, “I think, for our show, it’s very much our feet are on the ground. Our characters, they’re not angels. They’re not heavenly. They’re just real people. I think the opposing force that you’re talking about is the conflict within theirselves. How does Miles feel about being manipulated or feel that someone’s controlling him in a way? I think that’s where the conflict comes, whether you want to put yourself out there, and what are the consequences for your personal life and professional when those things collide?” 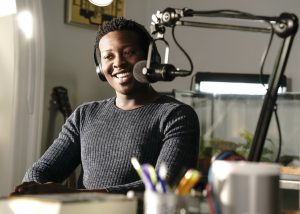 GOD FRIENDED ME stars Brandon Micheal Hall (pictured) in a humorous, uplifting drama about Miles Finer (Hall), an outspoken atheist whose life is turned upside down when he receives a friend request on social media from God and unwittingly becomes an agent of change in the lives and destinies of others around him.

“I think the path is exactly what the story is, what God Friended Me is, which is finding and reconnecting your faith in humanity and what the world has to offer,” Hall said. “So, when a great show like The Mayor is swept underneath the rug a little bit, for me, it puts me in a place of, well, if that’s not what the people want, then what is it that I can do to make change and have an impact? Then I sit down with these two geniuses and they have this idea. So the path has been very much finding my faith again and recreating that ownership again.” 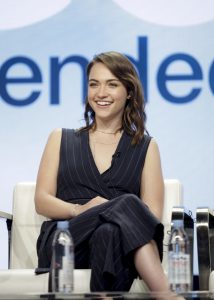 Violett Beane plays Clara Bloom, one of the first people the God Facebook account sends Miles to help. She will join Miles on his further adventures.

“For Clara, she was actually a friend suggestion that could have just been a one off,” Beane said. “But there’s a reason why she sticks around, whether it be she’s a reporter and she loves a story or she likes the new friendship. But there’s definitely a reason why she’s there.”

Joe Morton plays Miles’ estranged father Arthur. Arthur is a preacher, so Miles’ atheism drove a wedge through their relationship. Arthur is also the furthest thing away from Morton’s Scandal role of Rowan Pope that he could find. 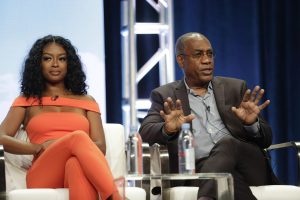 “It was a deliberate choice to find someone diametrically opposed to Rowan,” Morton said. “I didn’t want to do the same thing all over again, not that I would even be able to find such a wonderful character. This character is wonderful in a different way. The conflicts are really interesting. He’s a pastor whose son is an atheist and whose daughter is gay, both of which go against everything he believes in, and yet he has to find a way to hold on to love loving both of them and to continue their relationships and reconcile who they are.” 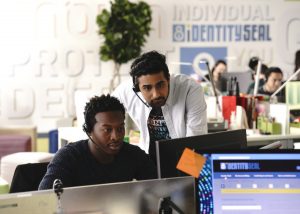 Suraj Sharma plays Miles’ colleague Rakesh who helps him try to get to the bottom of this Facebook account.

“For my character, the main thing is to a degree, he begins to feel  as this starts to happen, he begins to feel like he’s losing his best friend,” Sharma said. “He’s losing Miles. Simultaneously, he’s the kind of guy who has a lot on his mind, but he never really shows it or does anything with it. He’s in a job that’s not going to go anywhere and stuff like that, and this gives him that opportunity to flex that muscle, flex that intelligence, and help his friend. So for me, it’s that, yeah.”

Javicia Leslie plays Miles’ sister Ali. She’s been trying to get Miles to come back to the family and faith, but this technological interference may do more to bring him back.

“I think what’s interesting is that it starts off with social media but then it makes him put his phone down and get active in his community and have that connectivity,” Leslie said.

Watch the pilot of God Friended Me now and continue with the season starting Sunday, September 30 at 8:30 on CBS.

A Preview of God Friended Me Is Available Online Now