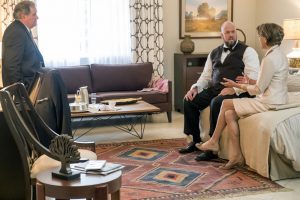 THIS IS US — “The Wedding” Episode 218 — Pictured: (l-r) Dan Lauria as Alan, Chris Sullivan as Toby, Wendie Malick as Mary — (Photo by: Ron Batzdorff/NBC)

I’ve been watching Wendie Malick since the comedies Dream On and Just Shoot Me, but lately I’ve come to know her as the voice of Bojack Horseman’s mother, Beatrice. By season four, Beatrice began suffering from dementia, and episode 11, “Time’s Arrow,” was a flashback into Beatrice’s incomplete memories.

I saw Malick at the Hallmark party for the Television Critics Association. She stars in two franchises of Hallmark Movies, but she seemed genuinely happy I brought up Bojack Horseman too. Malick also appeared in the season finale of This Is Us as Toby (Chris Sullivan)’s mother.

WLE: Are you in season 5 of Bojack Horseman? 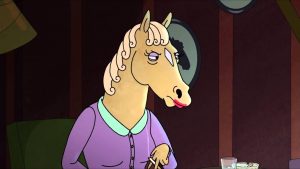 Wendie Malick: I don’t know. They haven’t told me yet but I’m assuming at some point Beatrice will come back again.

WLE: So you haven’t recorded anything yet?

Wendie Malick: No, no.

WLE: What did you think of that Time’s Arrow episode in season four?

Wendie Malick: It was such a gift, and maybe she’s just in the bin for the rest of her life and that could be the end, but what a gift that was. That was just so rich and satisfying. To have an arc like that in a cartoon was quite exceptional but that’s a very unusual animated show. 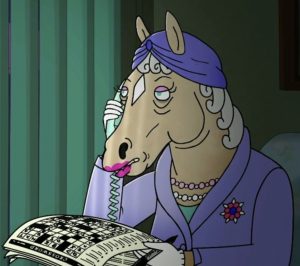 WLE: Do you think at the end of season four Bojack and Beatrice have resolved their relationship?

Wendie Malick: No. I think he’s going to carry that guilt with him for the rest of his life. It was heartbreaking.

WLE: When you started doing Bojack did you have any idea Beatrice would be developed this deeply?

Wendie Malick: No. It seemed like pretty much a one note kind of harpy. Obviously she had issues. I didn’t know where she came from but giving her a whole backstory, that’s what an actress loves more than anything, when you actually tell her where she came from and why she’s the way she is. That was a gift.

WLE: Did you come to consider her a good mother?

Wendie Malick: I think she did the best she could with what she had.

WLE: You’ve been in so many popular shows like Dream On, Just Shoot Me and Hot in Cleveland. What do people now most know you from?

Wendie Malick: That’s a good question because times have changed and there are new platforms where people are discovering me that didn’t watch network television. Some people do know me from animated shows now. My niece and her friends don’t ever watch network television. It’s all Netflix and streaming stuff, but I suppose probably the thing I am most known for to this day is Just Shoot Me. I think that was probably the highest profile show at that time and certainly the biggest break for me was Dream On just because that opened this whole new world to me of comedy.

WLE: It’s hard to imagine now but that was still new for HBO to have an original show when they had Dream On.

Wendie Malick: Well, they had tried a couple not terribly successful ones. That was the first one that really landed. When they showed that with Larry Sanders that became one of the bets hours of comedy on television.

WLE: Have you gotten feedback on This Is Us since you did the finale? 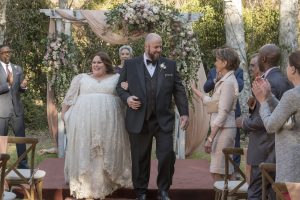 Wendie Malick: Oh God, yes. It’s such a humongous show.and I came very late to watching it. At first I thought it seems like a nighttime soap opera and then I got so hooked on an airplane. I watched a few of them and I thought, “This is so smart.” And I know Dan Fogelman, who’s the creator, because I worked on Pitch. And my dear friend Dan Lauria who was the coach on that show. So to be able to come back and be Chris Sullivan’s parents was so great. It’s just such a talented group of people and it’s constantly surprising. I remember reading the season finale thinking, “Holy cow, I so did not see this coming.” But I think it mirrors life. We never know what’s around the next corner. It could be magnificent and it could be heartbreaking. You just never know.

WLE: Everybody thought you and Mr. Damon were crazy warning him not to marry Kate, because Kate’s amazing. Do you have any inkling of how that flash forward will come to fruition?

Wendie Malick: They haven’t told us. I know we’re coming back. I don’t know what the future holds.

WLE: Is she the type to say, “I told you so” a year later

Wendie Malick: We’ll have to see.

WLE: Have any of your Hallmark shows gotten that level of recognition for you yet?

Wendie Malick: Yeah, it’s a whole different audience from what I’m used to. It’s a much more wholesome audience. I was saying, I can’t believe I’m on Hallmark. I’m not exactly like the girl next door but I guess I provide the salt. No, there’s a huge fanbase for Hallmark movies. I was really surprised by that. I have a whole new group of people that are watching my stuff.

WLE: Are you doing a series for Hallmark now?

Wendie Malick: I did these three Christmas movies. The last one is coming out in November, and then this Darrow & Darrow with Kim Williams-Paisley and Tom Kavanagh. We just did our third one and it just depends on our schedules. We just have to kind of do it when we can come together but it’s really fun and it’s a great show and really smart writing and I love doing it. We’ll see if we can find each other and find the right schedule to do another one before the end of the year.

WLE: What should we look forward to in the new Christmas movie?

Wendie Malick: A wedding. Christmas wedding, there will be snow, there will be sleighs, the whole deal. And, my character, who’s the matriarch of the family, it’s called Marrying Father Christmas and I have a love interest in this one which was really fun.

WLE: Is it Santa Claus, given the title?

Wendie Malick: No. It’s not Santa.