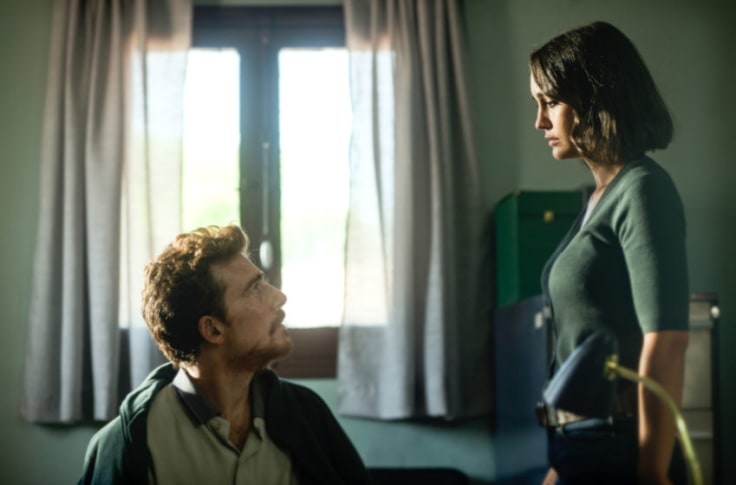 We’re now more than halfway through the inaugural season, and some of the problems I feared might arise in the series are starting to. “The Double” dives into the archvillain who, up until now, hovered from the edge. Cardinal Fabio Santoro (Manolo Solo) has mainly been unleashing colossal monsters who could give the bosses in the Demon Souls video game franchise a run for their money.

In this respect, the sixth episode of 30 Coins is a pleasant return to the pilot’s creature grotesquery. Father Vergara (Eduard Fernández) faces off against a mutated human with an obese lower-half reminiscent of Monsters, Inc.’s Henry J. Waternoose (with none of James Coburn’s charm). Yet, even with the occult manifestation, the events transpiring now seem telegraphed and thuddingly predictable. Maybe the series is better off when it doesn’t take its armageddon stakes so seriously.

A cold open of a young Vergara accidentally killing the family dog, then burying it to cover the evidence is a haunting way to begin this week’s show. We learn Vergara has been chasing self-forgiveness since childhood, still unable to find a way to free his guilt. However, this flashback turns out to be a trance that Fabio has lulled him into. The last thing Vergara and the audience remember is facing his old friend as he’s revealed to be a head figure in the Vatican. It looks like Vergara’s old seminary classmate wasn’t keen on reunion chit-chat.

Vergara is pulled out of his hypnotism by Sandro (Leonardo Nigro), who can somehow sense his old friend’s distress and access his dreams. Unfortunately, Sandro arrives too late — Fabio successfully coaxed the final Judas coin’s whereabouts from Vergara right before he returned to consciousness. Vergara finds himself in a prison cell, looking up at his white-robed rival, who isn’t through yet with our reluctant angel.

Meanwhile, Sandro knows his dearest pal will need all the backup he can get and quickly heads to the Vatican. There, frightening exhibits and imagery of Nazi Germany’s relationship with the Vatican surround the museum lobby. Also of note is the Roman spear that killed Jesus, kept under glass containment in the center of the room. That will come in handy later in the episode — another instance of setting up obvious victories before the fight even begins.

Sandro impressively turns on spy mode, quickly dispatching a guard in front of a suspicious door that men in white garments are entering. Clearly, a Cainetes convention is about to be underway. Sandro arrives at the commencement hall but oddly doesn’t think to make himself inconspicuous. He watches as Cardinal Santoro ushers Vergara — also dressed in the aforementioned tailored garments, the Cainetes insignia sewn in at the breast — to the podium, where he’s expected to accept his covenant with Satan. In other words, meet the newest member of Team Evil! 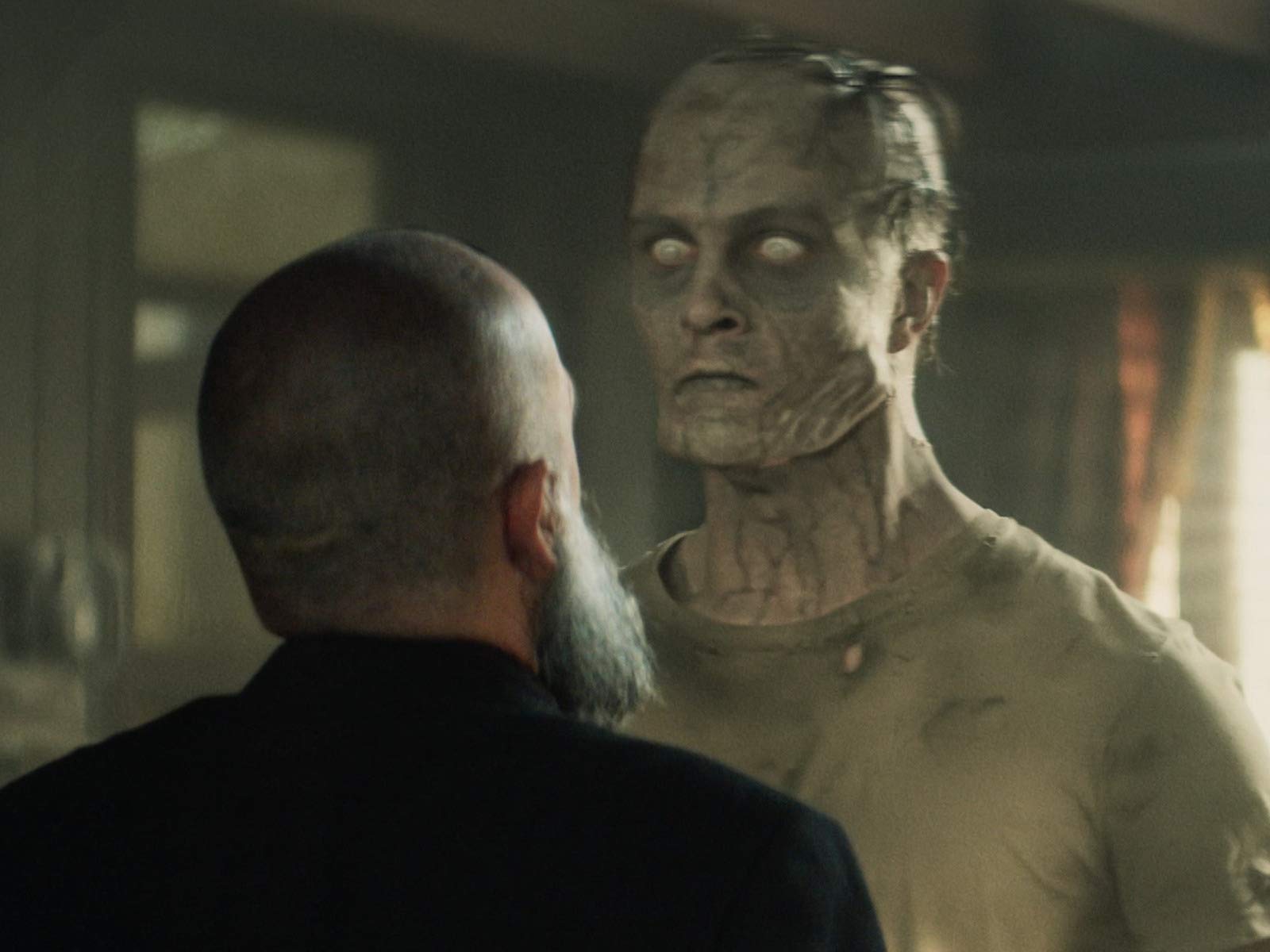 Of course, it’s all a ruse. Even though Vergara fakes his loyalty by punching Sandro after he’s captured and tied to a stool, waiting for his imminent execution, viewers know ultimate power wouldn’t sway our favorite priest’s altruistic heart. Santoro promised Vergara a taste of magic, derived from the spells written in Jesus’s gospel, retrieved and stitched back together by Cainetes archivists. These spells provide abilities — breathing the Devil’s fire, resurrecting the dead, telepathy that defies physics, transmutation, etc. — that match those of God. However, the Judas coin apparently activates an even greater superweapon that would alter reality itself. Therefore, it’s vital that the ancient currency remains in Elena’s (Megan Montaner) possession and out of Cainetes’ reach.

Speaking of our veterinarian heroine, her missing husband’s (Victor Clavijo) return reverses her decision to leave Pedraza. The trouble is, Mario isn’t actually her husband. One of the old women in the village transforms her scarecrow into Mario to locate the coin. She clearly has ties to the Vatican’s ancient evil order, but her identity remains a mystery for the time being. Her eyes turn a milky white while possessing Mario’s doppelganger, controlling his every physical and verbal response. Once she’s convinced Elena of Mario’s “realness,” the witch goes a step further by persuading the ostracized woman to leave Pedraza once and for all.

Elena swearing to stay away from Pedraza, and then coming back is starting to wear thin. The writers are having difficulty figuring out what to do with Elena and Paco (Miguel Ángel Silvestre) while Vergara is off facing the narrative’s real crisis. With their romance still in limbo — even after several instances where they could consummate their feelings with a kiss — there’s not much hope for this couple-in-the-wings until they agree about what’s more important: saving their village or forging a new life without it. Either way, there’s a whole lot more monster goo to get through before calling it quits.

Shortly after Elena and her body-snatched husband drive away from town, Mario begins interrogating Elena, using physical force to derive the coin’s location. Despite a brief car wreckage that provides a momentary distraction, Elena can’t find a way to escape, but she does have access to her phone. Paco and Sergeant Lagunas (Papa Nieto) receive her texts for help, and the pair rush to their standoff destination: a highway bridge overlooking the same river Elena threw the coin into in a previous episode. Via the witch, Mario warns Elena that there is no escaping the coin once it finds a new owner — its fate is tied to hers and will eventually find its way back.

After a struggle, the possessed Mario is finally vanquished back into straw and soot. But it’s not over yet — Paco also brings along some tragic news about the real Mario: he’s been dead all this time, buried by his murderer Jesús (Paco Tus). The old villager’s motive is unclear, but he confessed after seeing who he thought was Mario walking around town, looking very much alive.

With her husband dead, surely it’s time Elena and Paco end this friend zone charade, right? Um, not so fast! The episode concludes by jumping to Paris, where a chef at a seafood restaurant skins a fish, only to discover Elena’s missing coin inside. Before the dish can be replaced for its diners, one of them agrees to keep the coin for good luck. The hand that retrieves said valuable belongs to none other than Roque (Antonio Velázquez), Elena’s past fling, guaranteed to be back in her life soon if fate has anything to say about it. Despite an enthralling opening and closer, “The Double” is the series’ weakest episode yet for peddling out too many foreseeable scenarios. 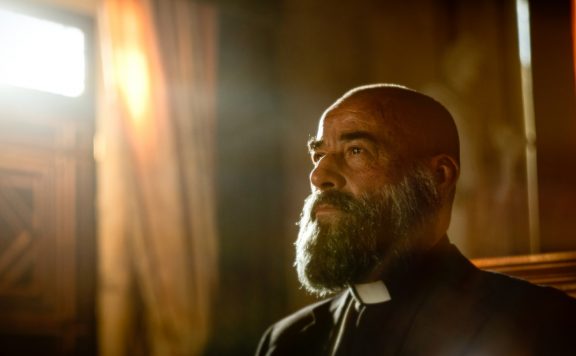 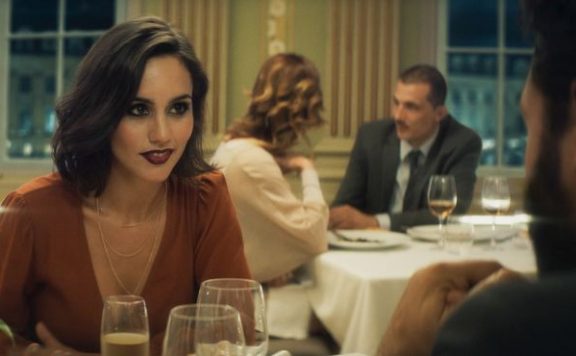