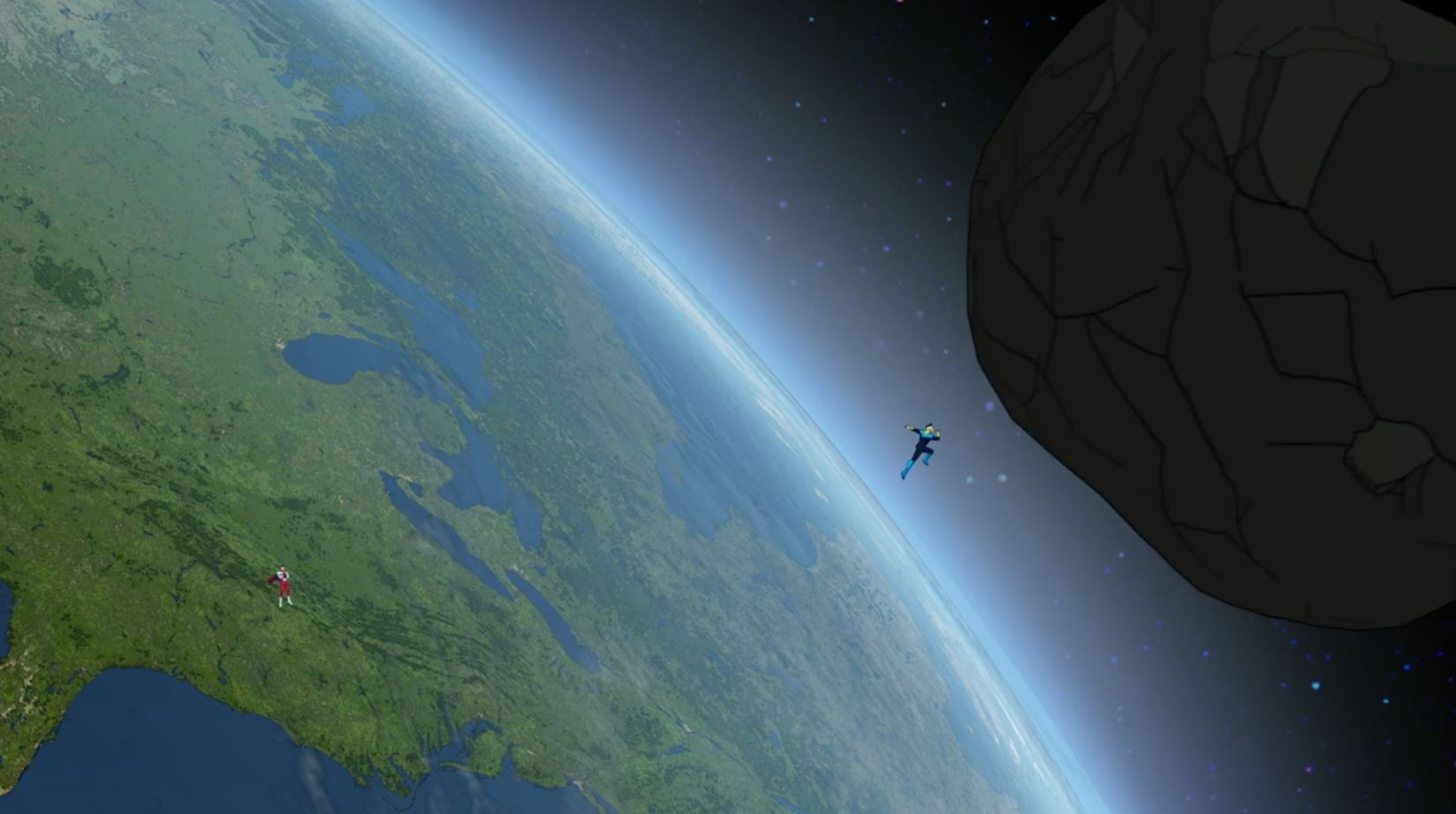 The thing about Invincible (as in Mark) is that he’s…well, Invincible. He may have a lot to learn about time management skills and how invincible he truly is, but that’s not going to stop this Invincible animated from delivering some major beatdowns to truly test this principle out. On the other hand, at least audiences received an introduction to Battle Beast (voiced by Michael Dorn), an honor-driven warrior who does not go down easy. Oh, and the new Guardians of the Globe also helped show just how important it is to train before a battle.

Before getting to the big, bloody fight that ends this week’s episode, “That Actually Hurt,” it’s important to note that Invincible’s main focus, this week, is on commitments. We see Mark struggling with managing his schedule when it comes to his relationship with Amber, as well as his schooling and work, because of time spent fighting crime, saving the planet (to some degree, even if he only handled a decently-sized meteor), and training with his father. Amber may be getting sick of Mark’s excuses, but what a friend Eve is to speak up for him in a time where he can’t defend himself, let alone tell Amber the truth about who he is.

The other superheroes have similar commitment issues. An early check-in with the Guardians reveals that while they have the strength to take down bad guys, they aren’t playing into the team spirit of things to come out with an even stronger record. Black Samson calls out Rex on where he could have been more efficient to little avail. Monster Girl is annoyed at a lack of respect. While we didn’t spend much time with the original Guardians, we saw a group of people committed to their cause and very good at working together. 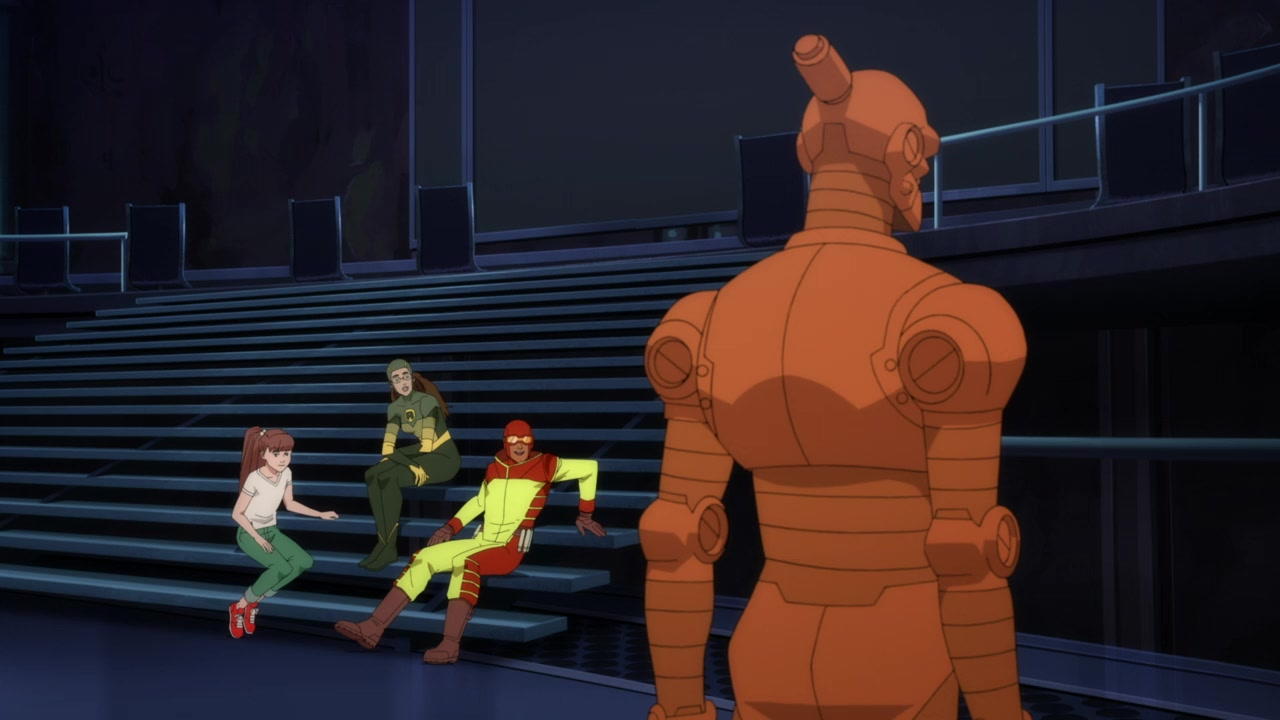 Meanwhile, as far as seeing difficulty working together, Nolan and Debbie continue with some rocky business as a couple. In particular, Debbie has not lost her suspicions of her husband. After finding Damien Darkblood’s notebook, let alone incriminating evidence of something after finding a clever way to get Nolan out of the house, she knows it’s only a matter of time before she’s going to have to confront this situation. The only problem is knowing what to do with the most powerful person on earth. It plays into a conversation Mark brings to the dinner table, where Nolan advises putting value into the greater good and bigger picture heroics. At the same time, Debbie sees a clear purpose in helping anyone in need.

That “anyone” is Titan (Mahershala Ali), a criminal enforcer who can activate stone skin armor around his body. As we soon learn, he’s working for a cyborg crime lord known as Machine Head (Jeffrey Donovan). To keep his family safe, he must remain committed to doing as Machine Head instructs, which consists of fairly violent deeds. His solution – get help from Invincible.

The first portion of this episode does well in juxtaposing these two actions, as we watch Titan reluctantly perform criminal acts while Mark gets more used to being a superhero (this episode is set three months after Mark has received his powers). Bringing the two together allows for some fun dialogue, along with recognizing the dilemma, which Mark brings to his parents. The show does well in playing into the spirit of a comic by tricking us to a point, along with Mark, as far as what Titan intends to do, thanks to Invincible’s efforts. 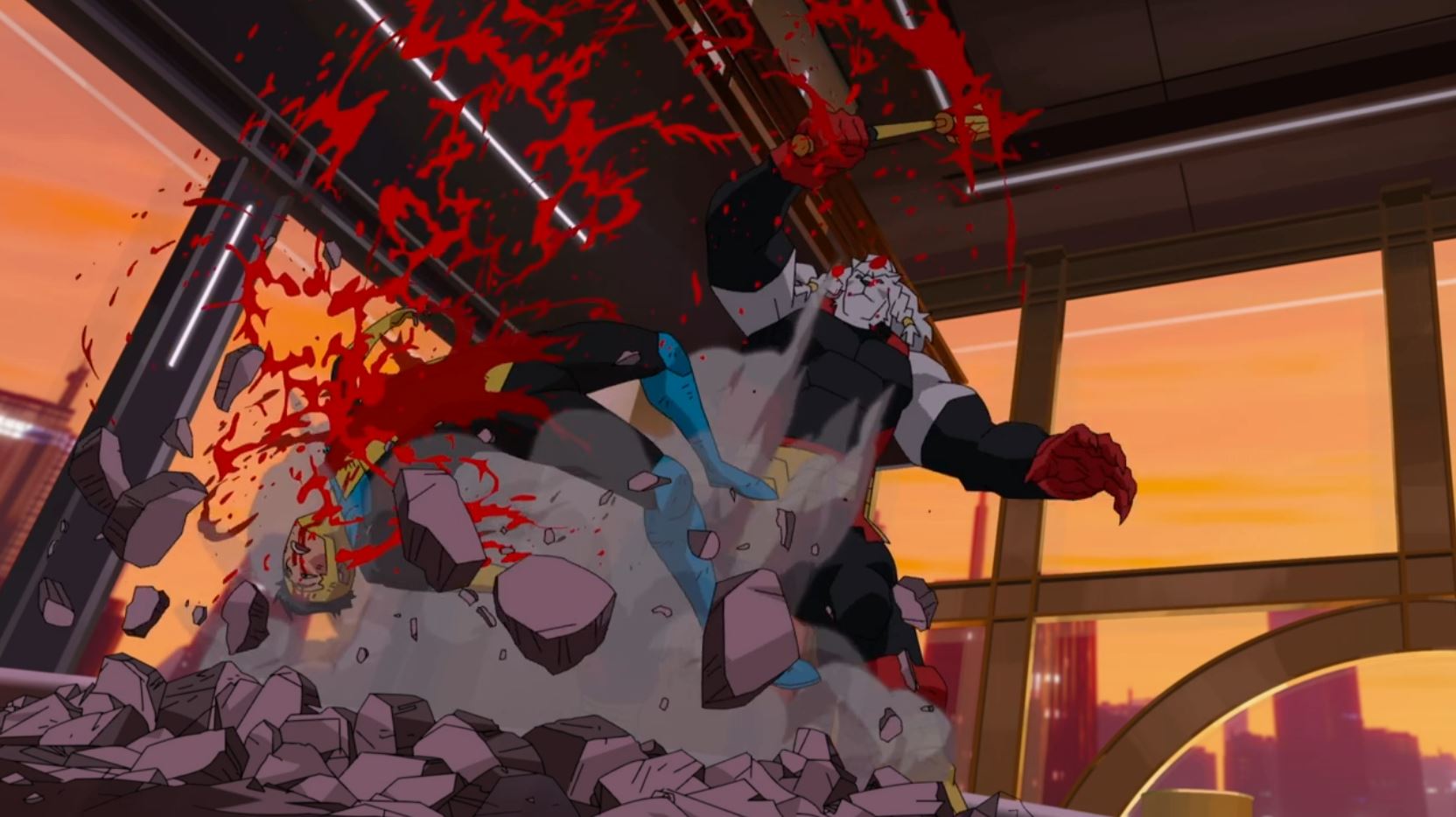 Of course, those efforts don’t come easily. What starts out as a simple enough plan turns into a bloody rumble resulting in major injuries all over and a disapproving Nolan from a distance. While not as deadly as the fight that closed the pilot episode, Machine Head has hired some muscle that doesn’t go down easy, let alone at all. Mark and Titan do their best but are outmatched. The Guardians arrive and add some new dynamics to the fight but are also undone. Even Mark’s rage comes out once again but adds little to the fight overall. By the end of it, Mark, Black Samson, and Monster Girl are in bad shape, and no one else feels that much better.

We do get a glimpse of Nolan, taking me back to his words about what this will do for his son. Regardless of how much one agrees, Nolan is positioned to be in the right. He told Mark this would end very badly for him, and putting his trust in someone in this situation was a bad idea. I may not feel Mark is above helping people on a smaller-scaled level, but even without seeing his face, one can feel the mix of contempt and smugness that must be happening with the elusive Nolan, as he hovers just outside the battle where his son takes a true beating.

Still, Invincible persists because he can. He has the ability to shake all of this off, even if he got hit harder than he has before. Will this even teach him a particular lesson about how to treat certain people? No idea. And I’ll certainly be curious as to how he reacts when he learns what Titan’s true plan was. For the time being, though, we can just hope he finds a convincing way to make Amber understand. 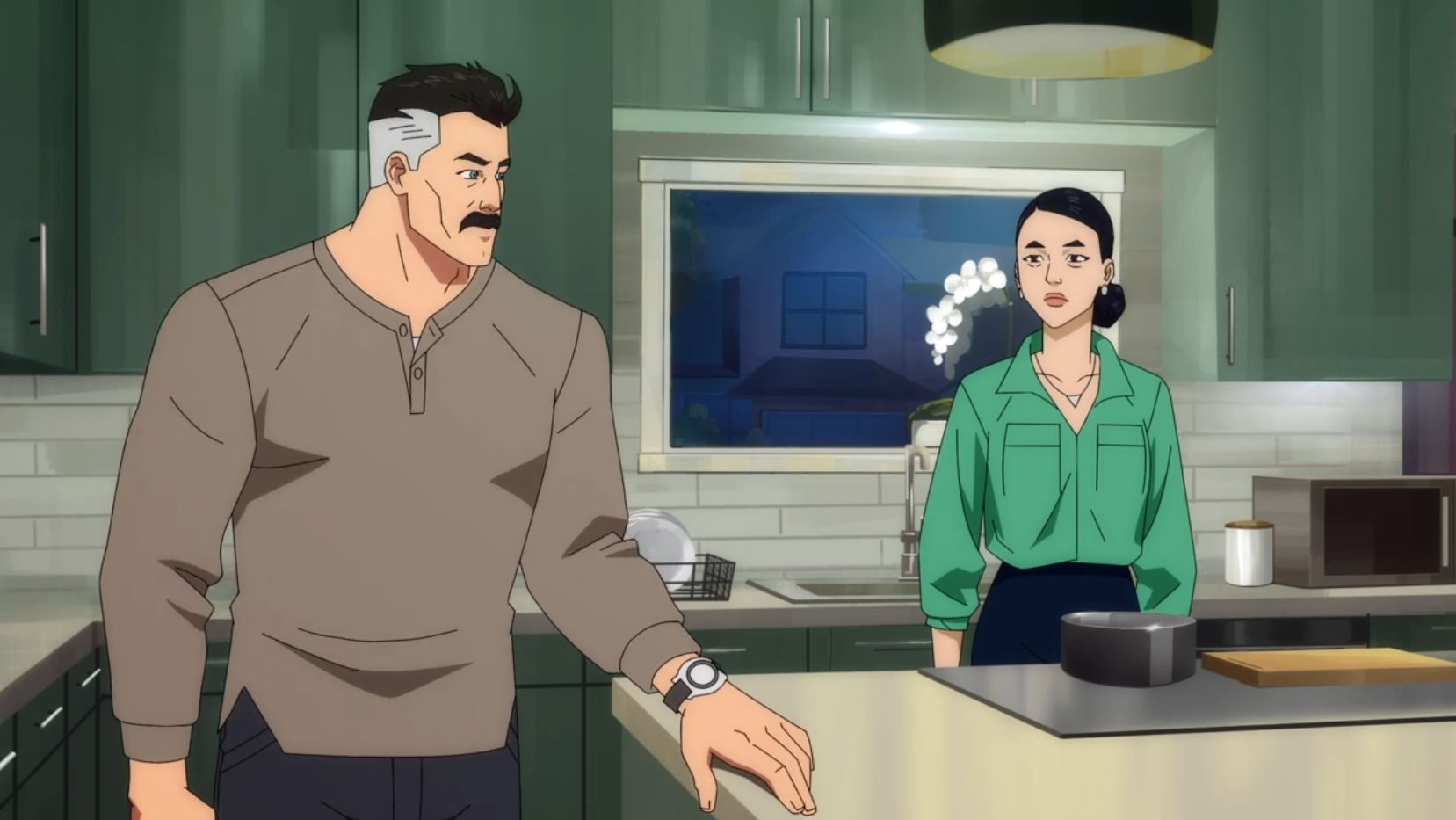 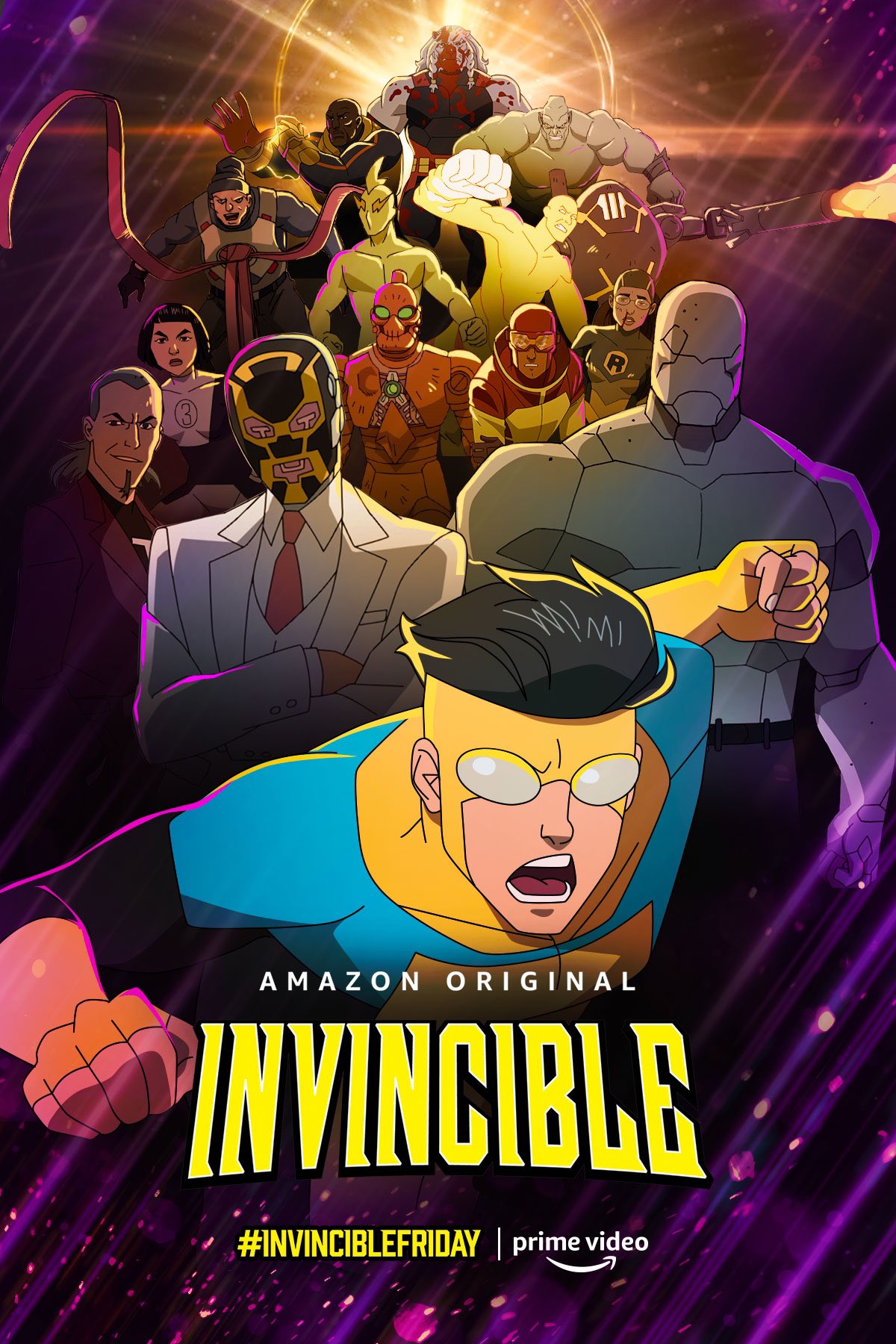 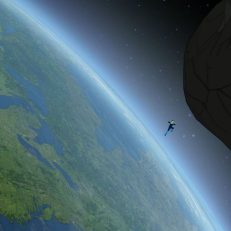 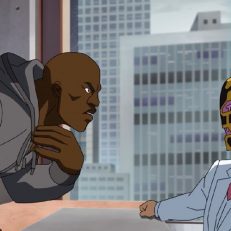 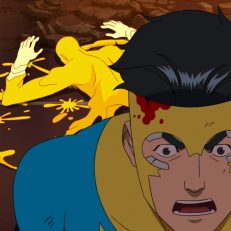 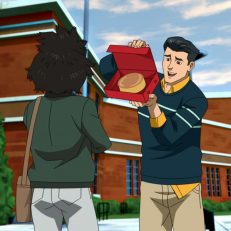 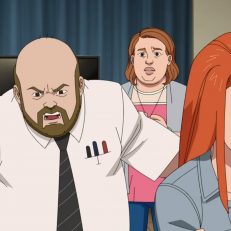 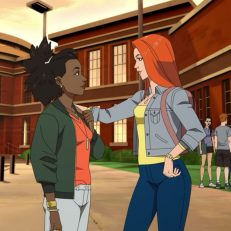 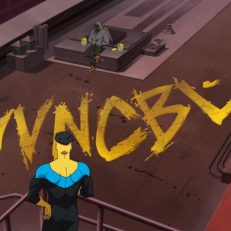