With its most important history lesson yet, “Lovecraft Country” takes us back to relive the painful history of the tragic Tulsa Race Massacre of 1921. The episode opens with the group (Leti, Atticus, Montrose, and Ruby) frantically trying to figure out how to stop Captain Lancaster’s (Mac Brandt) curse from killing young Diana (Jada Harris) as she slowly turns into the jig-a-boo from last weeks episode. As everyone is pointing fingers and casting blame on the other, Atticus (Jonathan Majors) reluctantly says that they have to turn to Christina for help and offer up their only leverage — Titus’s missing pages. He is dumbfounded when he finds out that Leti (Jurnee Smollett) has already given her the only bargaining chip they had for protection over her as Montrose (Michael Kenneth Williams) losses it and lunges for Leti. That’s when Ruby (Wunmi Mosaku) steps in to save the day saying Christina (Abbey Lee) will do it for her.

Lots of secrets are revealed during this episode. As Christina relays to the group what is needed to possibly save Dee (she can only reverse the spell giving her time, but she will eventually die because the curse is tied to Capt. Lancaster), she says she will need the blood of Dee’s closest living relative — and with Hippolyta (Aunjaune Ellis) and George (Courtney B. Vance) both missing, that leaves Montrose. But he seems real hesitant. That’s when he drops the first bombshell on Atticus — George may be Tic’s father, not Montrose. And of course, all of Christina’s “favors” come with a condition — Atticus must come with her willing to Ardham on the Autumnal Equinox to sacrifice himself. While this is happening, on the other side of town, Capt. Lancaster and his team are frantically trying to save his life (after he was torn apart by last week’s monster) by patching him together with parts of Black people they’ve stolen. Christina (or William rather) pops up over at the lodge to one-up Capt. Lancaster and show what she can do with magic while gloating over his slow demise. 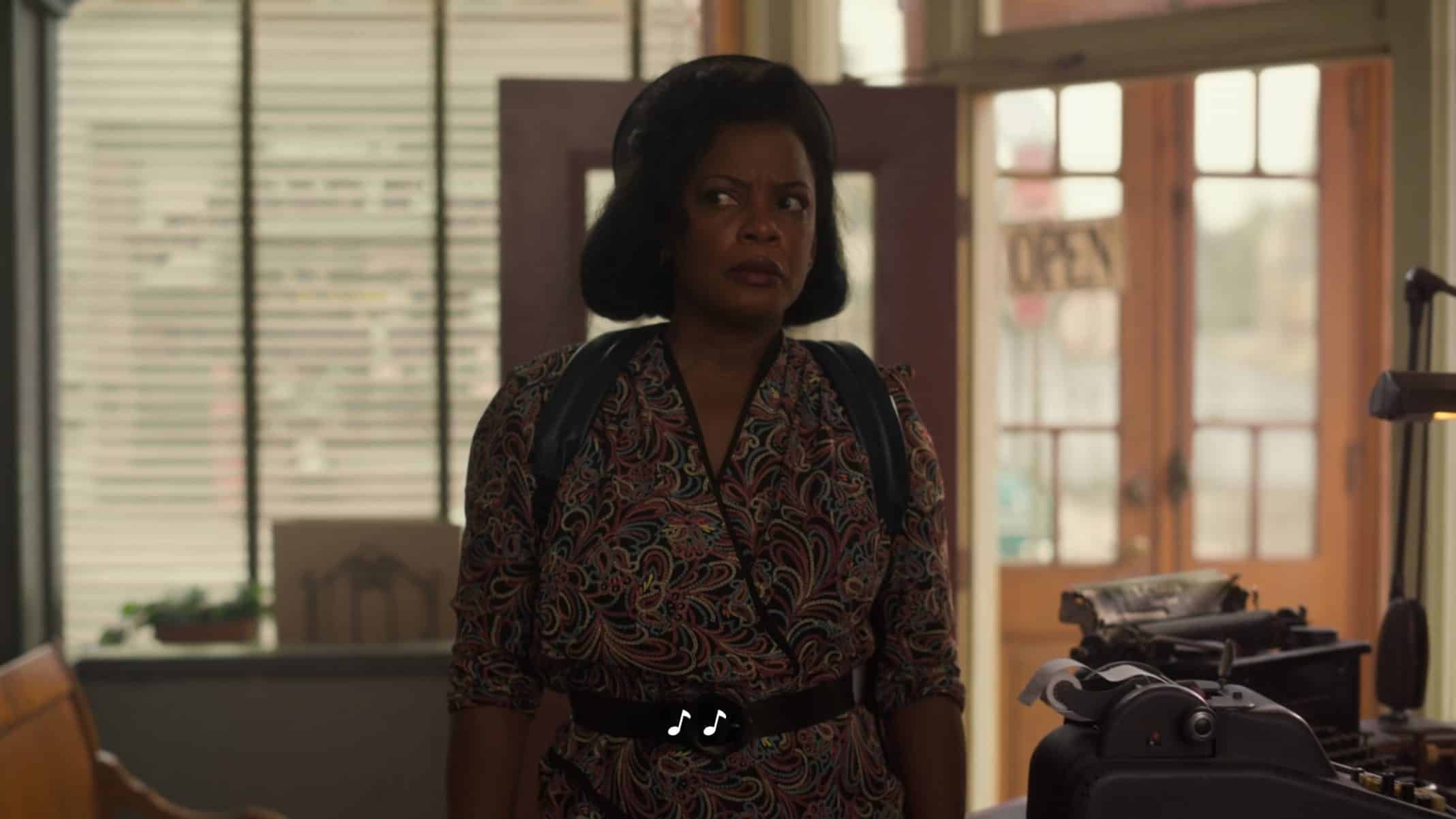 As everyone is reeling from recent revelations and Ruby and Leti are still at odds over who they can trust, Hippolyta returns just in the nick of time to save her daughter. Armed with the new knowledge she has obtained over the hundreds of years she traveled in time through the multi-verse and her newfound confidence (“I AM HIPPOLYTA!”), she takes the lead and puts a plan into action. The trio must travel back in time through the portal to retrieve the Book of Spell from Atticus’s mother’s house before it is destroyed in the Tulsa fire that kills her entire family. Believing that the “time machine” is broken, Hippolyta informs them that she can fix but they need a motherboard in order to set the coordinates correctly so that they travel back to the right time — and she just so happens to be that motherboard (how badass is that?!). Hippolyta is a mother on a mission!

While this is all happening, Christina finally reveals her true plans for Atticus to Ruby. She tells her that he must die in order for her to obtain her “eternity of firsts” and everything is meticulously planned out — there was only one catch, Ruby, and the relationship the two have formed. But she promises Ruby that she won’t hurt Leti, Ruby’s only requirement, showing that even though the sisters have an often contentious relationship, family is still everything. Back at the observatory in Kentucky, as Hippolyta opens up the portal, Montrose hesitates, frozen and traumatized as flashbacks from his youth in Tulsa and the moments leading up to the massacre come flooding back. We know we are in for an intense rest of the episode.

As we are visually (great costuming and set design) transported back to 1921, we are shown Black Wall Street in all its glory, a scene rarely seen in the media, as it should be seen and remembered. As the trio embarks to recover the book, they are given a glimpse of Montrose’s traumatic past and now understand a little more why he is the way he is. Montrose’s father was a drunk who beat him for being gay. Generational trauma and the cycle is real. We also get a glimpse of the dynamic between Dora (Atticus’s mother), George, and Montrose. As Montrose runs off to confront one of his demons, Leti and Tic are forced to split up to save the book and keep Montrose from affect history (or the present/future rather). It’s at this moment that Tic reveals that he knows Leti is pregnant and she says they should name him George. That’s when all hell breaks loose and the mob embarks on the town and chaos erupts.

Atticus finally catches up with Montrose as he looks on to his younger self and his friend Thomas. As they watch the scene unfold, Montrose tells Tic about their relationship and how he watched him brutally get murdered that night as his life changed forever. It was in that moment that he “cut out all of the soft parts of [himself] to be a man…because men have sons.” He tells Tic of the “long list of sacrifices [he] made to be [his] father.” It’s a heartbreaking scene about toxic masculinity and repressing our true selves for what society thinks and dictates we should be. But it’s also a moment in which Tic and Montrose grow a little closer. As the scene unfolds, the two realize that the “unknown stranger” who saves Dora, George, and Montrose that night is actually Atticus — it is here when we realize this all has already happened — the story has already been written. 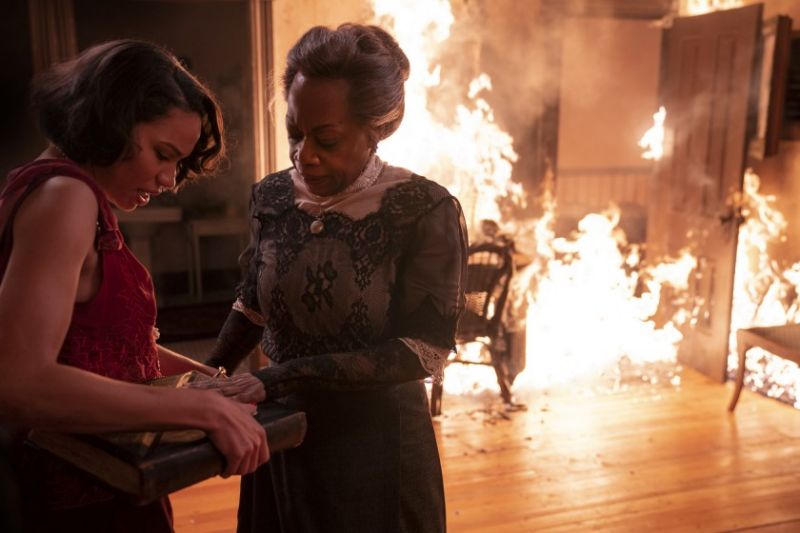 Elsewhere in town at Dora’s house, Leti has gained refuge from the angry mob with Dora and George’s family. Scared and fearful of their lives, Mattie (Regina Taylor) the matriarch of the family senses that something is amiss (could it be her sneakers???) with this stranger among them. As Leti tries hard not to change the past as they ask what is happening and what their fate will be, Mattie catches on and confronts Leti as she searches for the book. Leti must come clean that she is from the future before Mattie entrusts her with the book and accepts her fate. In a gut-wrenching scene where the family and the house goes up in flames, we see the full power of Leti’s invincibility spell.

Back at the portal, something is wrong as only Tic and Montrose are back in time. Tic jumps through the portal to find Hippolyta foaming at the mouth and struggling to keep it open. As she struggles, Tic pleads for her to hold on and do it for Dee but she can’t hold out any more as her hair turns blue and she transforms into the female superhero from Dee’s comic book. Meanwhile, back in 1921, we are left with a haunting scene of Montrose looking out in terror as the city is engulfed in flames and Leti walks through and emerges from the bombings and fire like a phoenix out of the ashes more determined than ever. The opera music as she strolls defiantly like a woman on a mission is a nice touch.

“Rewind 1921” is one of the more serious episodes of the series so far. It’s about the pain of reliving your past and the traumatic effects of that past. Those traumas and learned behaviors are then carried on with the next generation creating a vicious cycle. It is also about opening our eyes to the evils of humanity and the depravity of the massacre (as we also so in HBO’s “Watchmen”) and the generational trauma that it left behind. But it also reminded us of what once was and how Tulsa and Black Wall Street should be remembered — as a place of prosperity, community, and full of potential. And that we will do anything for our family.