This is the way.

Of all the Disney-produced Star Wars content, the Force is strongest with The Mandalorian. Creator/showrunner Jon Favreau and Dave Feloni nail the franchise’s classic tone while taking bold new leaps with the enormous galactic playground at their disposal. The convergence of nostalgia and fresh imagination has become the saga’s official trademark, rallying fans of all generations to seek out and consume each new chapter within the greater lore.

The Disney+ phenom uses its episodic structure to remind devotees that there’s so much more to war than those fighting on the front lines. Many planets, species, and subcultures often get overlooked because audiences tend to obsess over their favorite heroes and villains, and who might have associated with them. Thankfully, just like its inaugural season, Season Two of The Mandalorian doesn’t give a womprat’s ass about validating theories or playing masseuse to your fan servicing needs. The job is simple and singular: get the Child (“Baby Yoda”) back to its home, wherever or whoever that might be. Watch their journey or leave. This is the way. 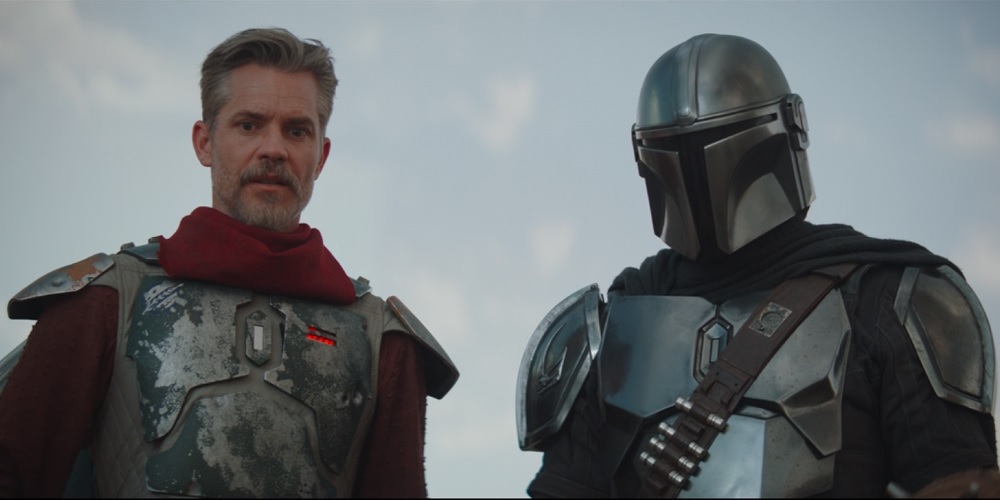 Picking up from the events of last season’s finale, Din Djarin (Pedro Pascal) is hot on the trail for Mandalorians with knowledge regarding the Child’s origins. His only lead at the moment is an Abyssin information broker named Gor Koresh (John Leguizamo), who is waiting for him on some backwater slum planet. Naturally, the meeting turns out to be an ambush for Djarin’s shiny new beskar armor. Though outnumbered, the protagonist came prepared with backup: wit and foresight. As we saw last year, that is more than enough to survive a mismatched skirmish.

It turns out the rumored Mandalorian that Koresh spoke of is back on Tatooine, a destination explored by Djarin during his earlier babysitting travels. Though, as we saw during the conclusion of “Chapter 5: The Gunslinger,” a familiar Mandalorian bounty hunter — presumed deceased — might still be lurking around the Dune Sea. Whether Boba Fett is miraculously alive or simply a mirage remains to be seen. One thing that cannot be contested: the fan favorite’s dollar store armor made it out of the Sarlacc Pit but with a new wearer this time. 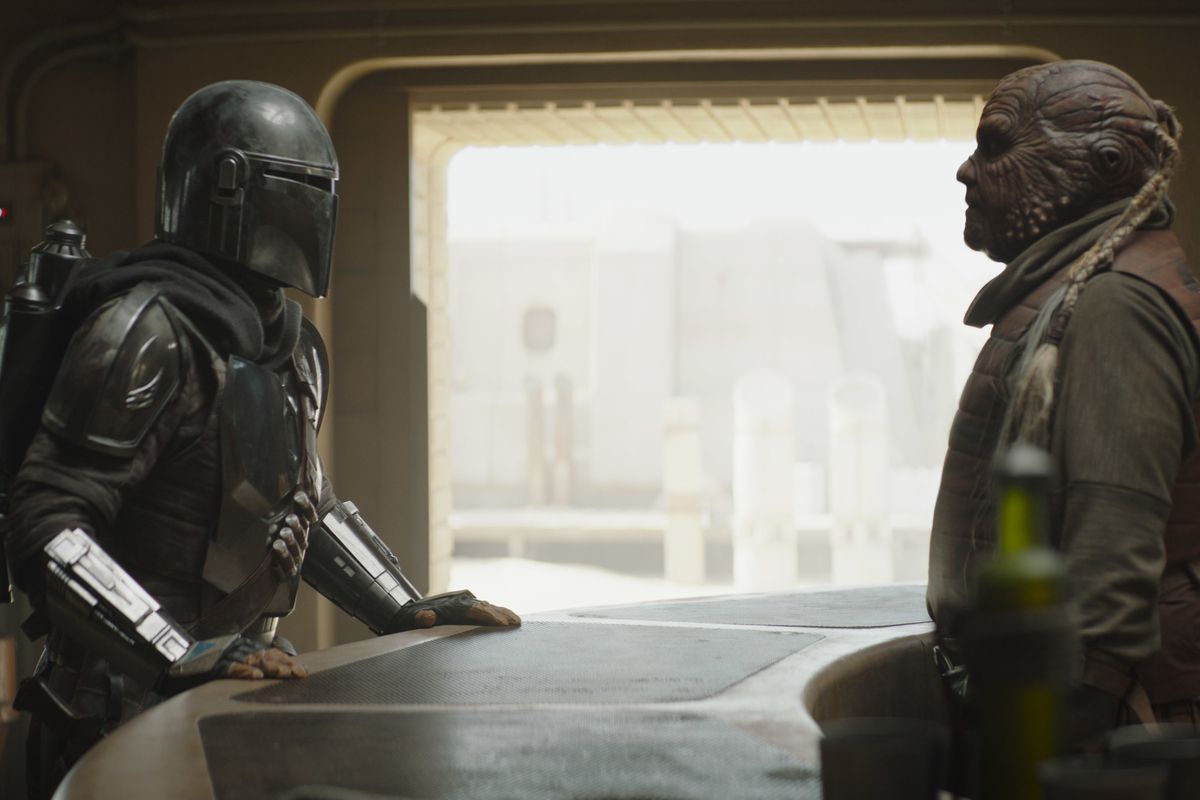 This self-elected marshal of Mos Pelgo struts around proudly with Fett’s armor, clueless about the former owner’s reputation or how sacrilegious it is to don Mandalorian armor when unaffiliated. The real surprise is the actor underneath the helmet: Justified’s own Timothy Olyphant is here playing a more passive and altruistic Clint Eastwood role as Cobb Vanth. Pelgo has long since been abandoned by government aid or lawfulness, Vanth the only volunteer to watch over the town while miners and moisture farmers keep it running. Unfortunately, their small haven has turned into a hotspot for raids and ravaging, the latter caused by a gargantuan monster known as the Krayt dragon.

The mythical creature has been an object of fascination for the Star Wars community ever since Obi-Wan Kenobi (Alec Guinness) mimicked one in A New Hope. Diehards also know about the precious pearl the dragon safeguards. To see this bit of mythology play out onscreen is a dream come true for superfans like myself. Along with the Krayt’s ichor and carcass, this treasure is a valued possession for the Tusken Raiders. Thus, villager and raider must set aside differences and work together to bring down this leviathan once and for all. If you’ve ever wanted to see a Star Wars confrontation play out like a group raid from World of Warcraft, “Chapter 9: The Marshal” fulfills this geek fantasy. 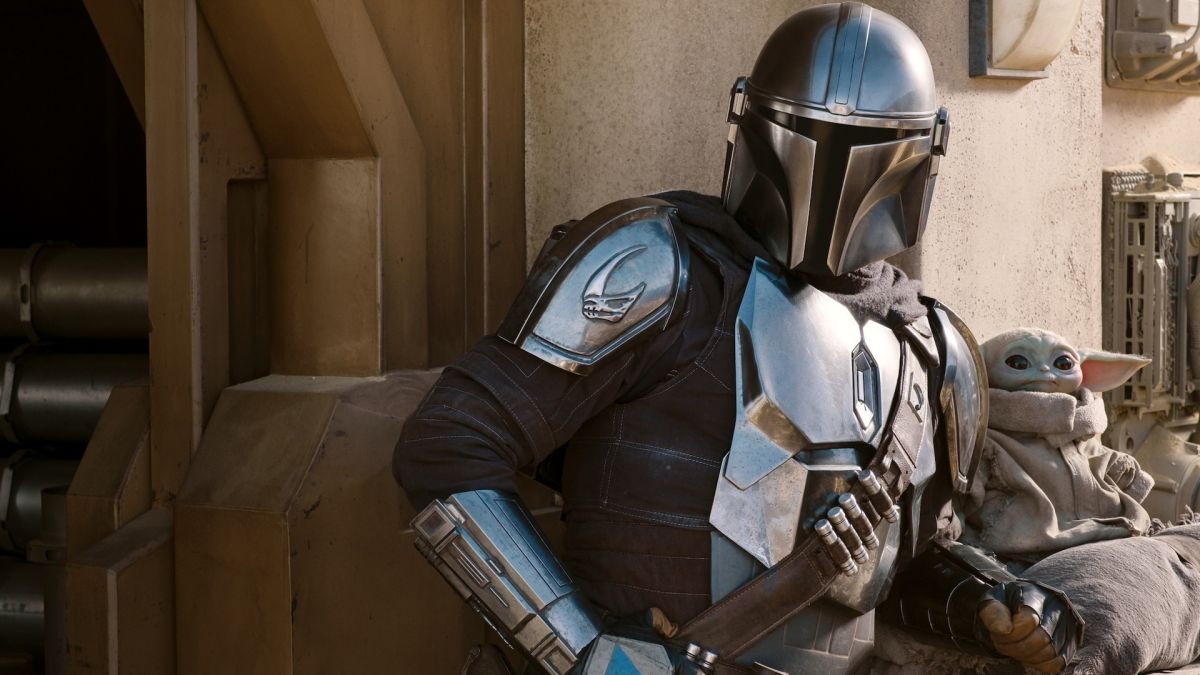 What’s immediately noticeable is the show’s increased budget. Battles don’t feel confined to a few sets, and the scale of action is considerably wider. This face-off between humanoids and beast produces one of the more visceral encounters in a Star Wars adventure. Not only does the ubiquitous threat of the Krayt weigh down on settlers of the land trying to live peacefully, but Djarin’s personal quest mandates the dragon’s defeat if it’s to move forward. Watching Mando do whatever it takes for the Child, not to mention his budding bromance with Vanth, further raises his stock as a television icon. Baby Yoda might be the main pop culture draw for the viewership at large, but Favreau reminds everyone that the title character is the star for a reason.

The Mandalorian remains crucial viewing for Star Wars lovers, deepening our appreciation for the source because it pays respect to the saga’s minor players. In many ways, Djarin is similar to the viewer: he’s on a mission to a destination unknown, sometimes so focused on getting there that he risks ignoring the people, civilizations, and surroundings that become part of his trek. Luckily, Feloni and Favreau deny our worst impulses to rush the journey. We’ve become so accustomed to fresh Star Wars content that we’ve forgotten its pangs of absence for years, even decades, at a time. So now that we have it, breathe it all in, and embrace the infinite richness of a galaxy that is still only at the beginning of its encyclopedic potential. The Force will always be with the franchise…so long as we understand that it involves so much more than dynasties and internet sensations.

Star Wars: The Mandalorian is distributed by Walt Disney Studios and is currently streaming its latest season on Disney+.

TV Review: ‘The Mandalorian’ Jettisons Off to a Strong Sophomore Start