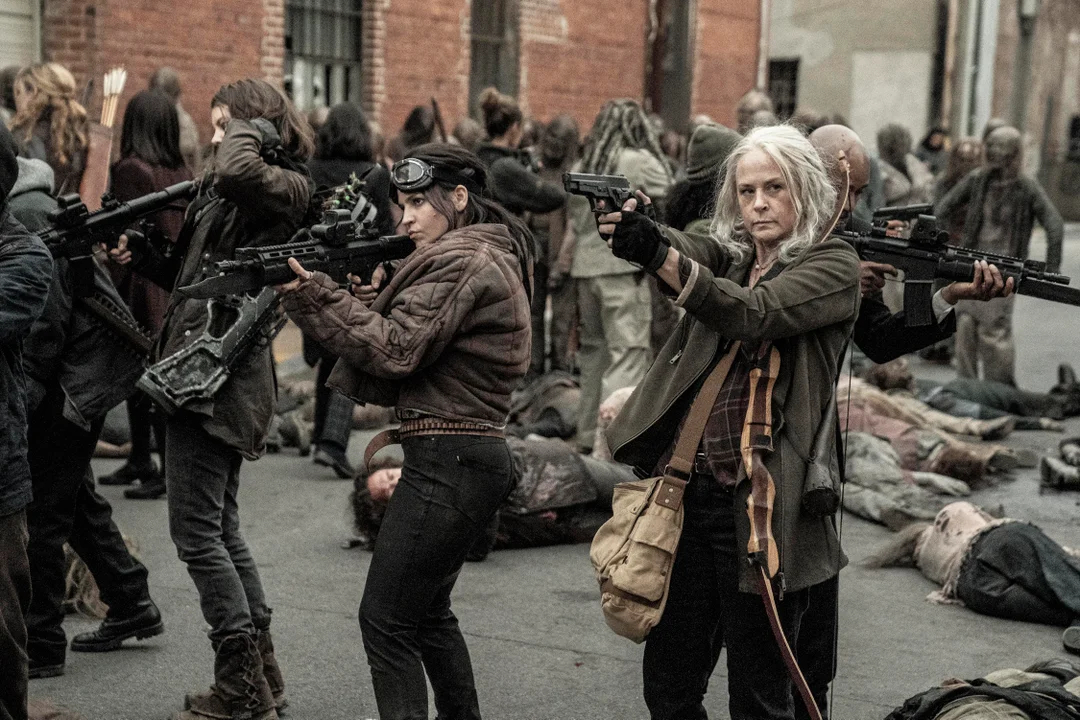 I’ve been writing full episode recaps for The Walking Dead since season 3 debuted in October 2012. It’s funny, as this has never been my favorite television show, even when it has been at its best. And yet, since I read all of the comics, played the terrific Telltale video game series, and have been a co-host on a weekly podcast concerning this series, I’ve certainly wanted to continue to have my say on it. If anything, it can be more interesting to cover a flawed series that write about a consistently great one (though I’ve happily done that as well). “Rest in Peace” is a fitting enough finale for The Walking Dead. It wraps up its major storyline and does just enough to leave the characters in a place that makes sense while doing what’s needed to set up the AMC-demanded spin-off series that are coming to expand this universe. Perhaps this could have been more impactful, but part of the mantra of The Walking Dead, in any form, has always been how this all just keeps on going.

At least the goals of this finale are pretty straightforward. A horde has invaded the Commonwealth, and our heroes have found their way back to each other in this most desperate of times. They need to save themselves and the community while dealing with the tyrannical Pamela Milton once and for all. In the immediate present, however, Daryl needs to get an injured Judith to safety, or she’ll die from a gunshot (delivered to her courtesy of Milton).

The way a lot of this ends up playing out does not offer a whole lot of surprises. If anything, most audiences probably had the most concern over which central character would end up dying. While I may have had a secret hope that one of the many announced spin-offs was a decoy to lure people away from thinking Carol or whoever would actually be taken out, the truth is, having security already in place for Maggie, Negan, Daryl, Carol (and probably all of the children) didn’t leave many exciting options. 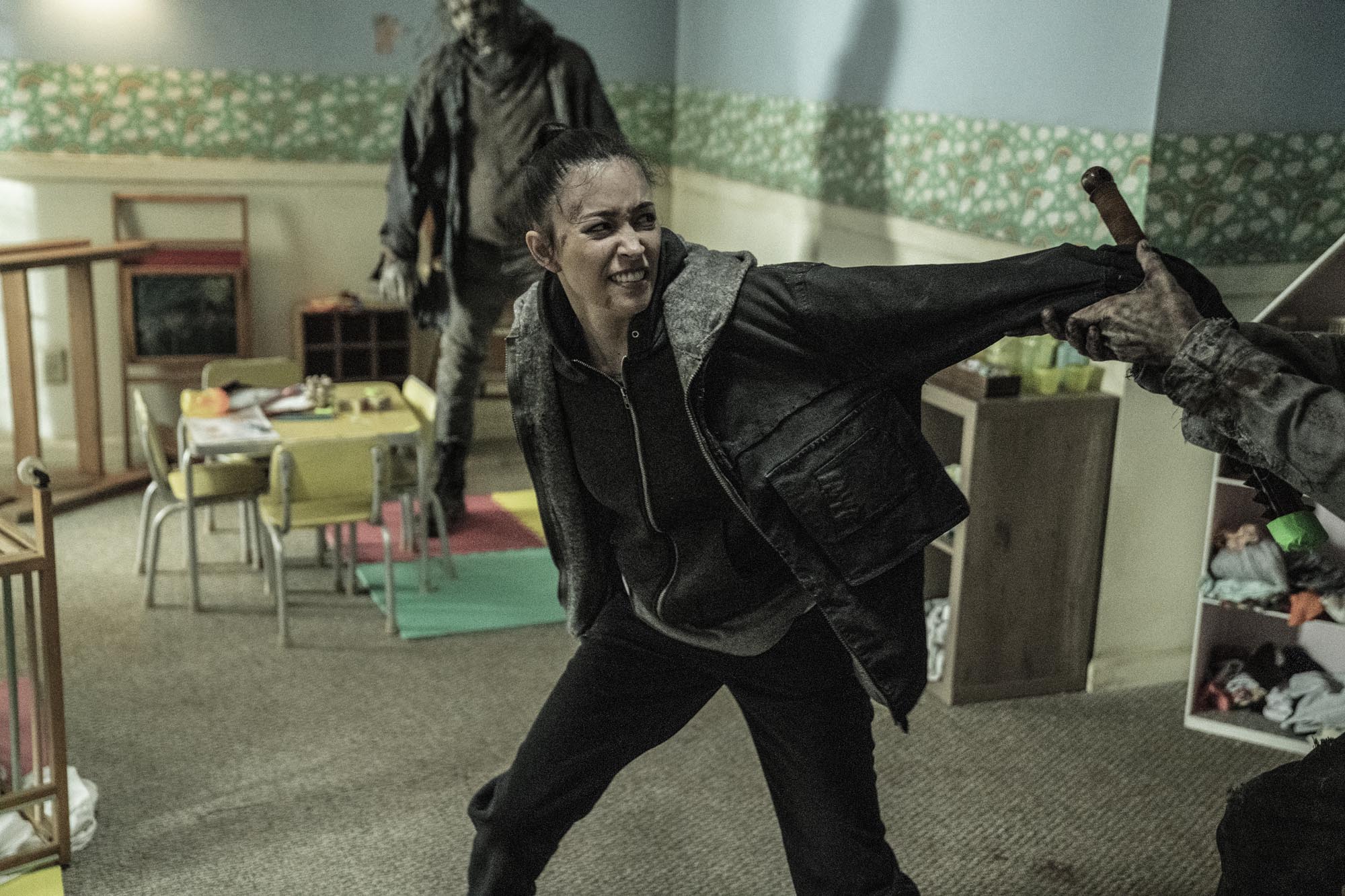 That’s not to say it wouldn’t be upsetting to see any of the series’ mainstays getting bitten or shot, but the unpredictability of this series has long since passed. In the end, it was Rosita, but she didn’t go out without a fight. It’s a good thing too. Christian Serratos was given a lot of good scenes to work with in this final season, allowing her to bounce off well with Gabriel, Eugene, Daryl, and Mercer. Ultimately, this show made the most of her journey to find her daughter, get in some great zombie kills, and peacefully deal with a bit on a shoulder. Not every character can say that.

With that in mind, everyone else made it out of this fine. Well, not the recently reintroduced Jules and Luke, but then you realize why this show suddenly brought back Dan Fogler and his Oceanside girlfriend at the last minute (we needed a couple of red shirts). This was less an episode about finding the darkest avenues to take and more one about showing the good that can come from seeing “the ones who survive” working together to attack a problem.

This was clear right away when Judith was given all the means to survive without question. The danger element has never been entirely gone from this series and actually reached a new peak with the Whisperers, but I was beyond feeling like another baseball bat bashing was coming. For a series finale, writer/showrunner Angela Kang and director Greg Nicotero clearly had victories on their mind. 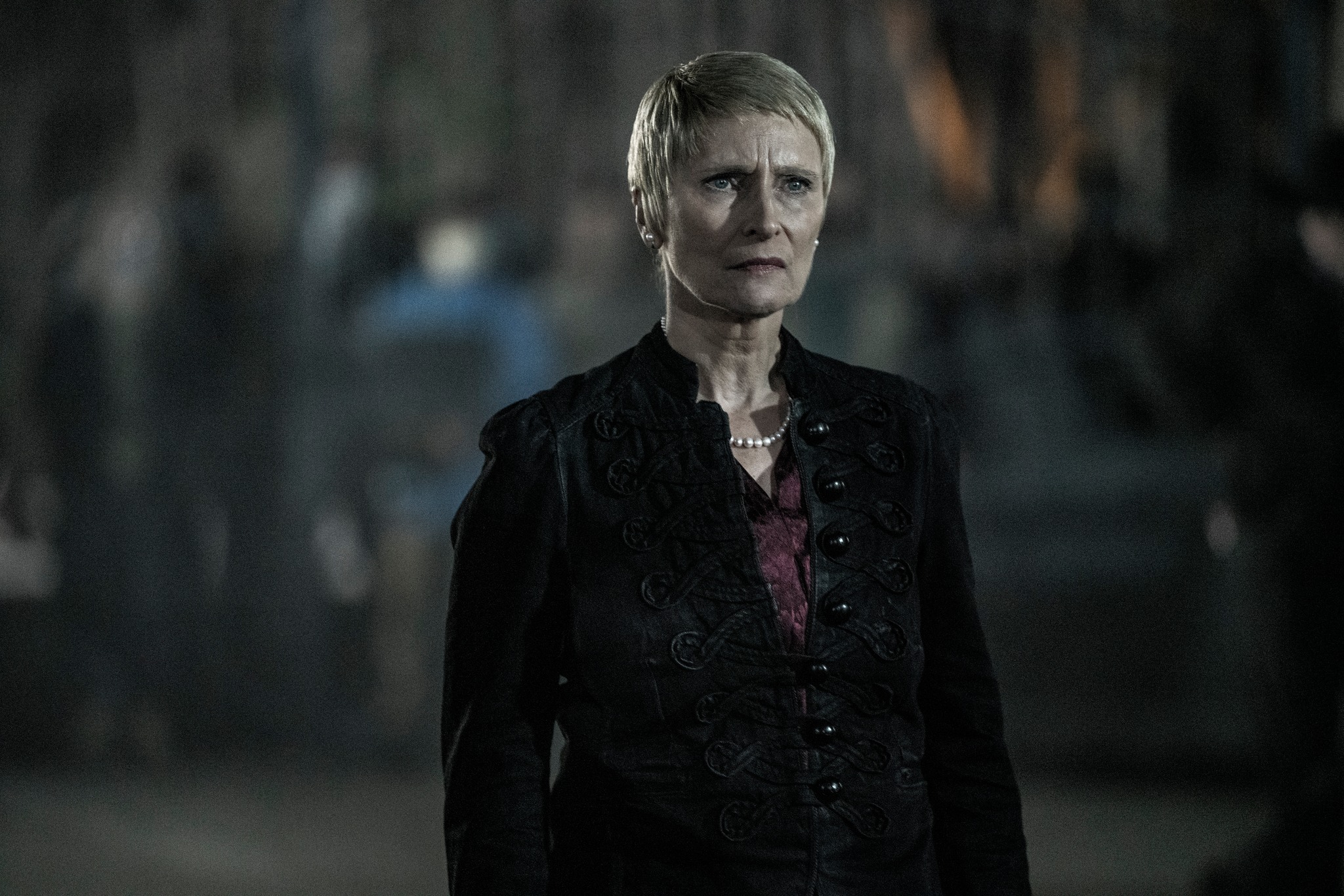 While we see different characters assemble in the early portion of the show, it all builds up to an intense standoff between our heroes and Pamela. The walkers are just outside the walls, and ol’ Milton is having her troopers shoot at civilians to keep anything foreign away. I’ve written about the minor use of social commentary this late in the season already, but this show really did away with any level of subtext by the end. Regardless, it boils down to a big discussion resulting in Pamela being arrested. Not at first, though, as she nearly kills herself by getting way too close to zombie Hornsby, but after that, she’s in jail.

In the meantime, to solve the herd invasion problem, well, what else do you do? Ezekiel comes up with a plan to lure everyone to Milton’s estate house by blasting Living Colour’s “Cult of Personality.” This is fun to watch, as we know the idea – blow them all up – but hearing the music and seeing the group plant dynamite and gasoline, everyone still delivers. Plus, this explosion was epic, so kudos to having one final zombie set piece to cheer at.

The rest of this episode is all about wrapping up these characters and enough moments delivered as needed. Perhaps the most significant one concerned Maggie and Negan. After a season of distrust and harsh words, Maggie tells the man who murdered her husband that she’ll never forgive him, but she is moving past her hatred of him. That’s good since we’ll see these two together again next year on their own series. But seriously, it’s a well-acted sequence, with Negan being all fitting reactions rather than his usual loquacious self. 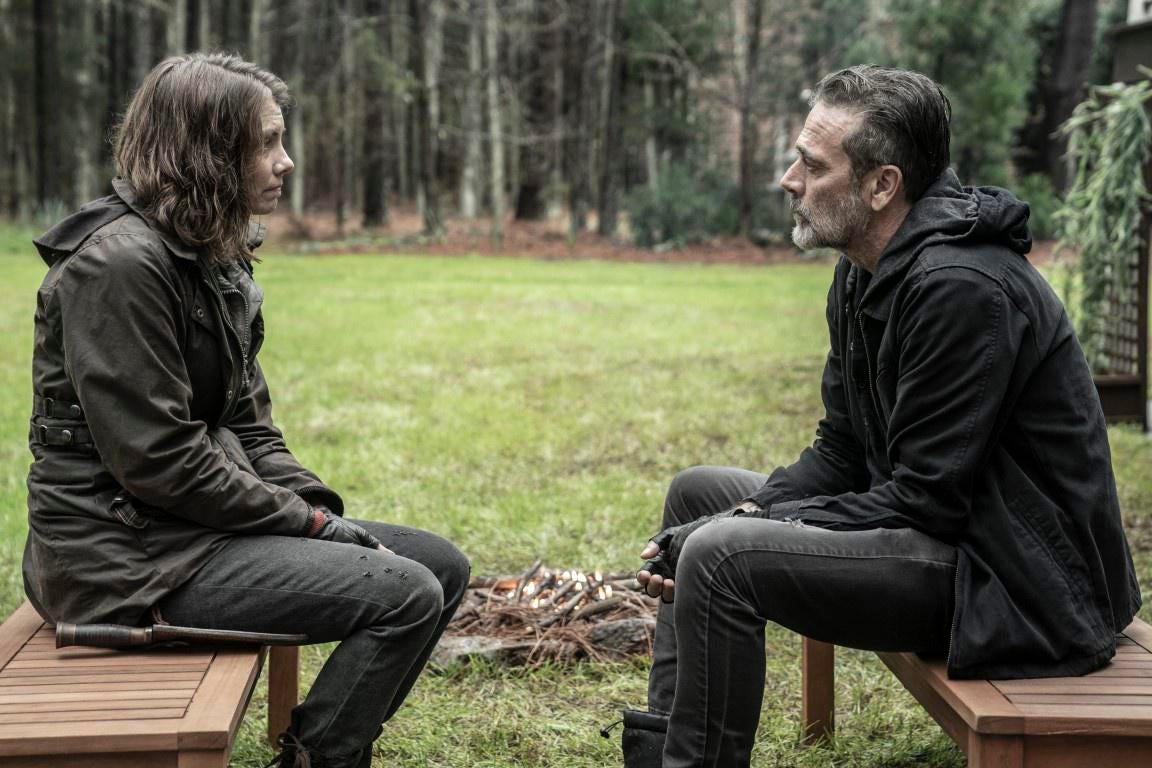 Other stuff is more straightforward, such as Magna and Yumiko reuniting and once again reminding me that this was supposed to be a big deal when they separated. We even get a big family dinner scene set to Fleetwood Mac’s “Landslide.” It’s goofy, but hey, the gang deserves something nice. This is offset by watching Rosita peacefully lay in bed as Gabriel and Eugene do what they can to comfort her before she passes (and is subsequently stabbed in the head to stop her from becoming a walker – this is tastefully left offscreen).

Cut to one year later, and everything is great. Everything is grand. Ezekiel is now the governor of the Commonwealth, with Mercer by his side as the Lieutenant Governor. Not bad, considering the once comical nature of the series’ Black characters dying off to make room for new ones. The rest of the updates on the status quo are a mix of fitting and vague. Daryl is leaving to go…somewhere, which is another way of saying his spin-off series is coming soon. He gets in his goodbye to Carol, however, and it’s the right kind of sweet (added punch since Melissa McBride is no longer involved in that spin-off series).

The real finale is saved for the surprise appearances of Rick and Michonne. Once again, knowing they have their own miniseries on the way, this ended up feeling more like an awkward ad for that rather than a way to bring things full circle in some way, but hey, we get to see these two characters on The Walking Dead one last time, which is not at all a bad thing. Of course, the emphasis is less on what’s going on with them (though Michonne found some seriously excellent battle gear in the time that’s elapsed since last seen), and more on them providing a reflection on all that’s happened matched to a montage of clips reminding us of all the characters from over the years. 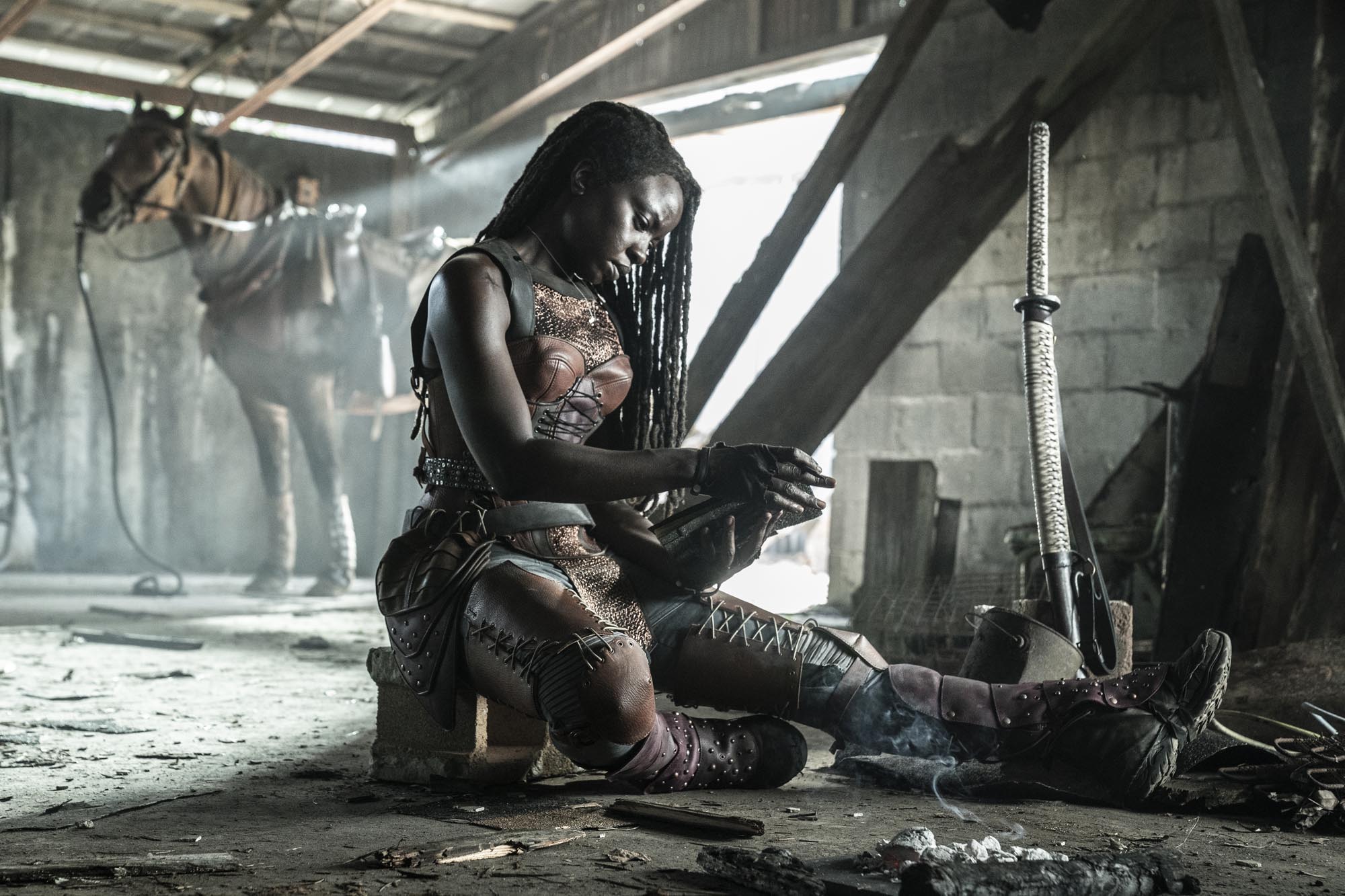 It can be odd to wrap up a show like this, given the importance of noting how The Walking Dead just kinda keeps going. There will be more problems to solve and deadly obstacles to overcome. However, this show can’t just end by settling further into its nihilism. Instead, it focuses on how the characters we’ve followed have prevailed since, as has been said, they are “the ones who lived.” In the end, that is the best way to look at it. While not perfect, we’ve seen these characters take on challenges together and fight back against those settled in ways not applicable to the current state of the world. That sort of progress and maintaining some level of hope keeps these people from becoming the walking dead. 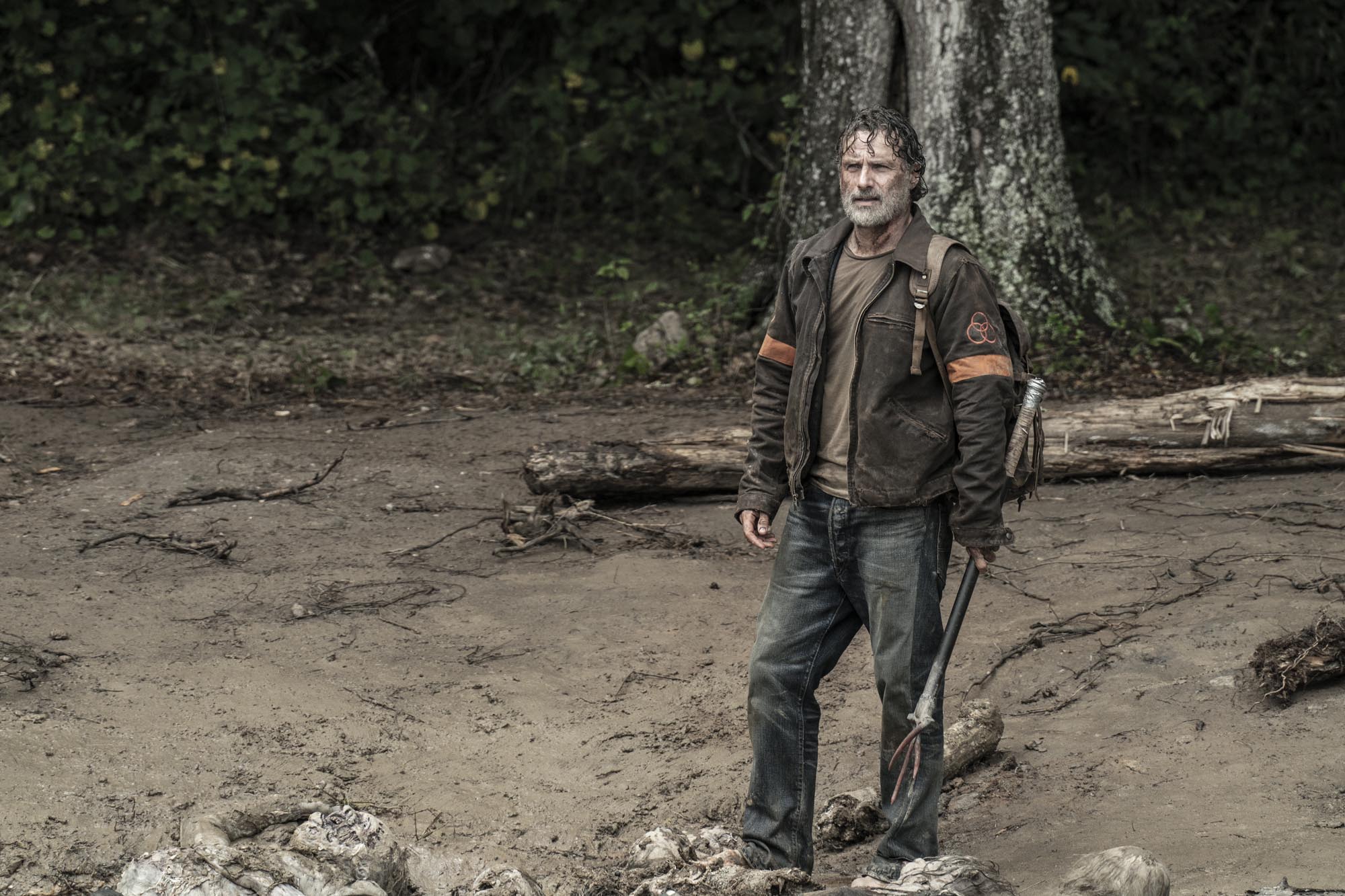 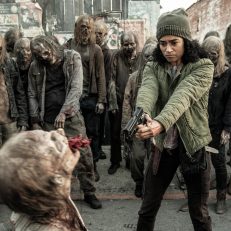 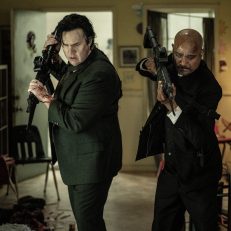 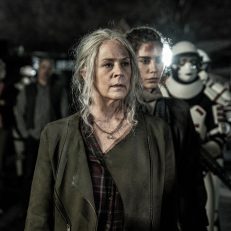 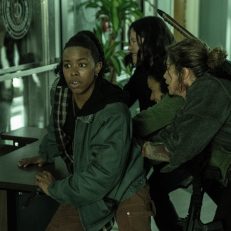 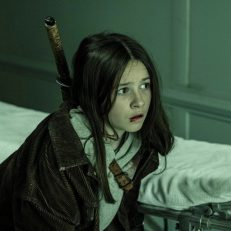 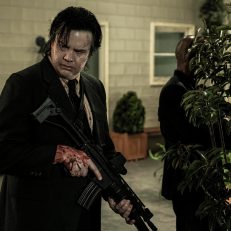 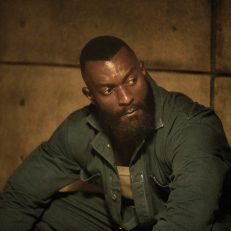 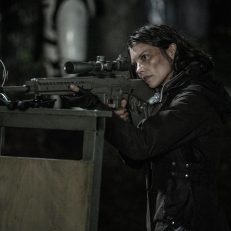