Sometimes being a fan of something you’re tasked to recreate has its drawbacks. Amazon Prime’s Utopia is an example of source material affection holding good storytellers back from bold re-imaginings. It’s clear from the seven episodes critics received that writer-creator Gillian Flynn — yes, the brilliant mind behind Gone Girl and so many other twisted, brainy crime stories — is as big an admirer of the original UK television series as its cult following. Unfortunately, her American remake contains all the conspiratorial meat of its predecessor without any of the intrigue that made it water-cooler television. Instead, the stateside Utopia is reminiscent of the promising inaugural season of NBC’s Heroes (minus superpowers). The difference: we know exactly how that turned out, so we’re prepared in advance for the ends not justifying the hype.

So what is Utopia then? It’s no paradise, though avid consumers might argue that unlocking its secrets does produce a nirvana effect. The title refers to a comic book that’s drawn underground fanaticism for over a decade. In the past couple of years, five close observers of the text have formed a digital chat group to discuss their consensus theory. They believe Utopia predicts global pandemics before they happen. In the right hands, it could help stop the next virus or pathogen before it’s unleashed on the public. 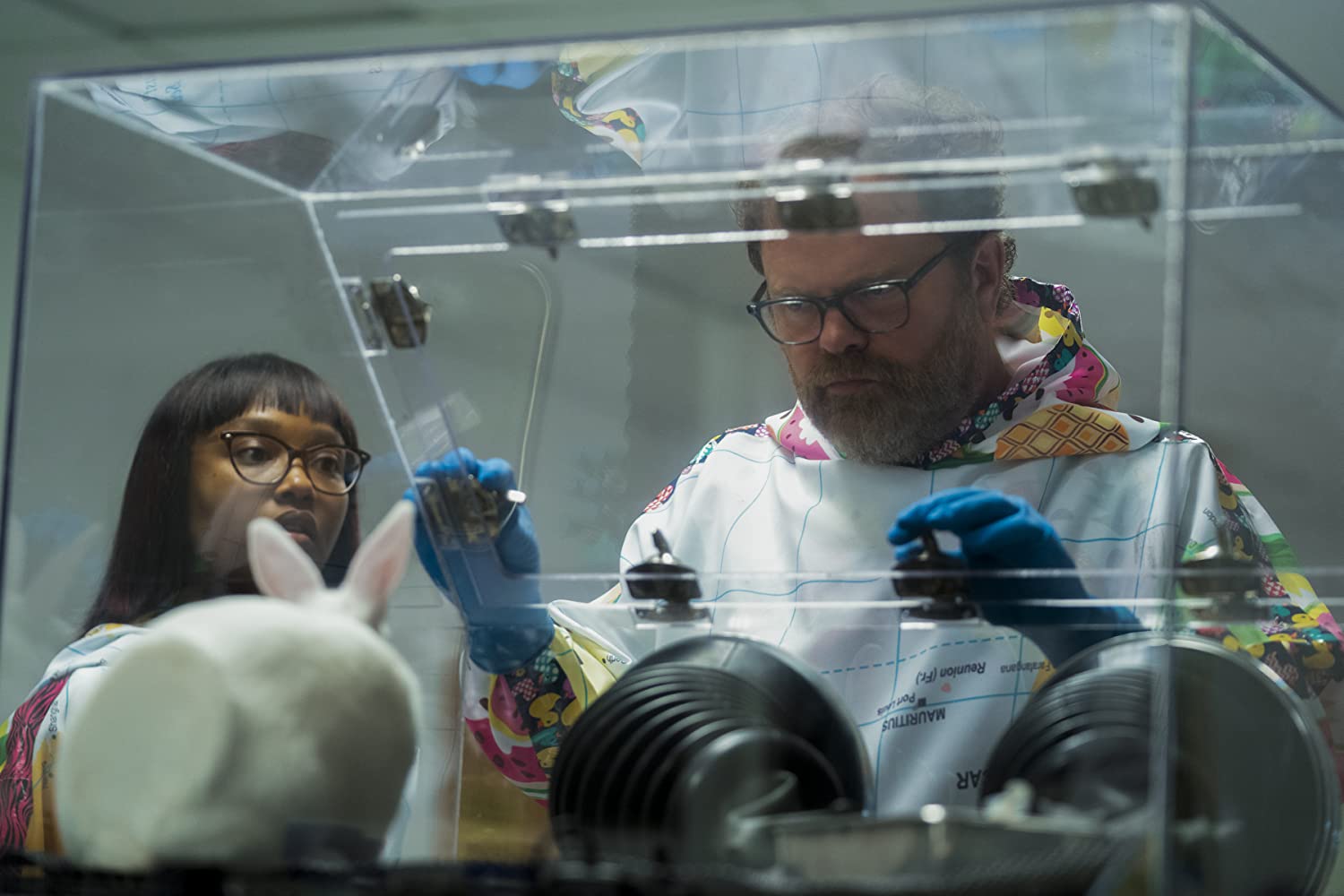 When it’s announced the comic’s entirety is up for auction at a convention in Chicago, the geek squad agrees to meet there in-person to bid on the coveted item. The group consists of team leader Samantha (Jessica Rothe), the skeptical Ian Ackerman (Dan Byrd), the ailing yet strong-willed Becky (Ashleigh LaThrop in a star-making performance), the wise-cracking Wilson Wilson (Desmin Borges), and the precocious Grant (Javon Walton), a kid who’s withheld his real age from the rest. With the exception of Grant, they eventually link up, only to learn a few hours later that Utopia is in the wind following a killing spree. The team is spared since they weren’t in their hotel rooms like the other bidders. Those unfortunate souls are gunned down by Arby (Christopher Denham), an assassin with ties to Big Pharma.

Zeroing in on the prized merchandise is Dr. Kevin Christie (John Cusack), a seemingly philanthropic man of science who cherishes family above all. Kevin is head of Christie Corps, a biotech company specializing in mass production and distribution of synthetic nutrients for children. When several elementary students fall ill after eating “healthy” lunch meat made in Christie Corps laboratories, the CEO is given the full media inquisition. Acting as both press secretary and vice president, Kevin’s shrewd son Thomas (Cory Michael Smith in yet another enigmatic villain role) gets the FDA and press off their backs while simultaneously clearing the company of malpractice. In fact, Kevin uses Christie Corps’ acquittal as an opportunity for heroic grandstanding. 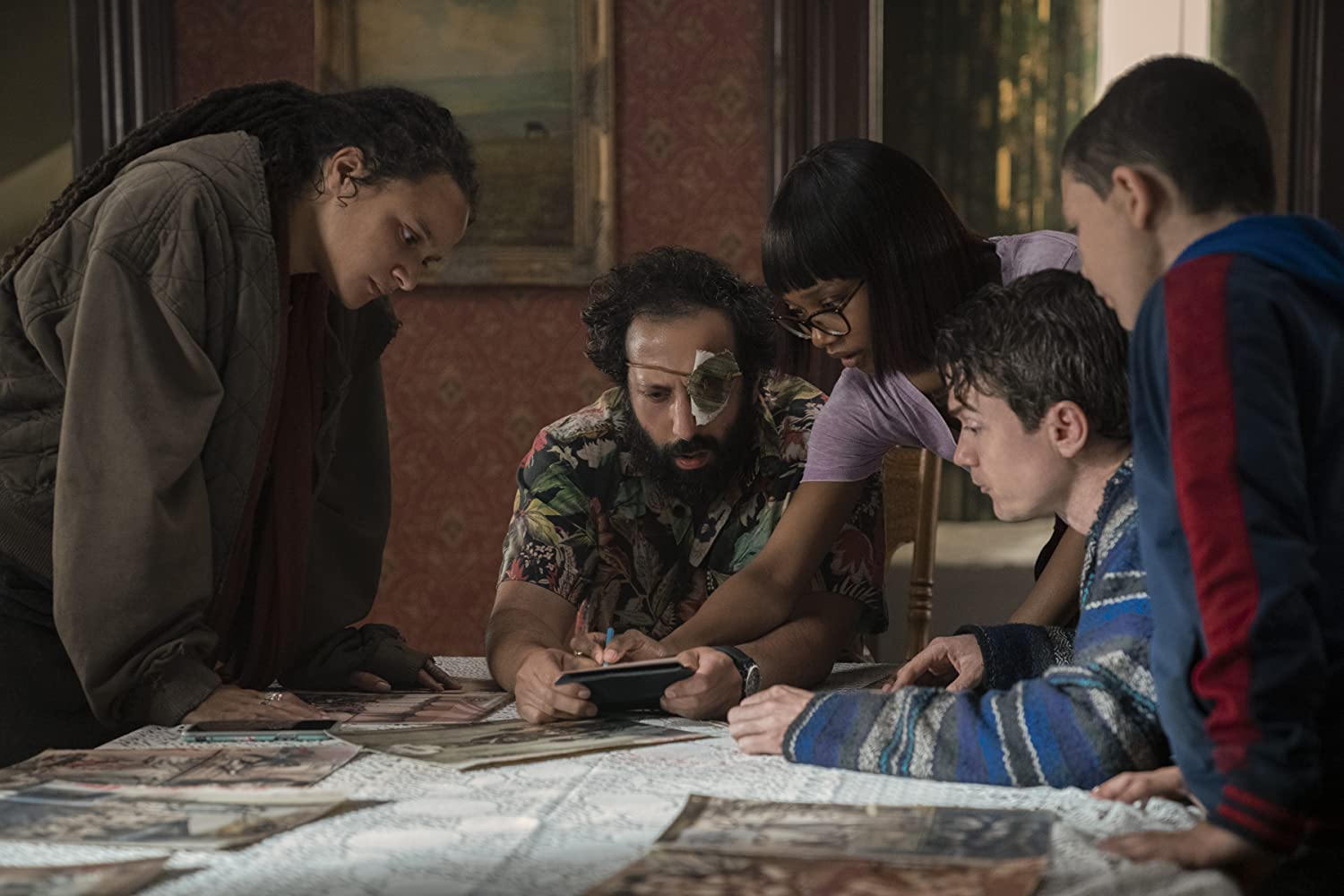 The evil corporation’s ace in the hole is Dr. Michael Stearns (Rainn Wilson, who sells drama better than a former TV boss of his), an anxiety-ridden virologist whose talents are wasted in a university basement office. Stearns is given career resuscitation when news breaks that the inflicted students exhibit a T-shaped rash on their forehead. The symptom is identical to the one caused by the flu virus Stearns discovered in Peru some years back. Wisely, Stearns created a vaccine in the event it accidentally dispersed into the population. Despite early misgivings, Stearns eventually hands over his vaccine to Christie Corps. Upon FDA approval, the vaccine will be mass-produced in the hundreds of thousands per day. According to the show, this is the one time in history you should reject a vaccine to ensure higher life expectancy.

Utopia is a lot more interesting when it dips into its mythology. The compelling comic saga revolves around a young girl named Jessica Hyde, who is kidnapped by an evil creature named Mr. Rabbit. The monster blackmails her scientist dad into creating biological weapons for global conquest. A friend of her father’s, known simply as Artemis, helps Jessica escape Mr. Rabbit’s clutches. Taking the young girl under her wing, Artemis trains Jessica in martial arts to defend herself against Mr. Rabbit’s goons, referred to as the Harvest. 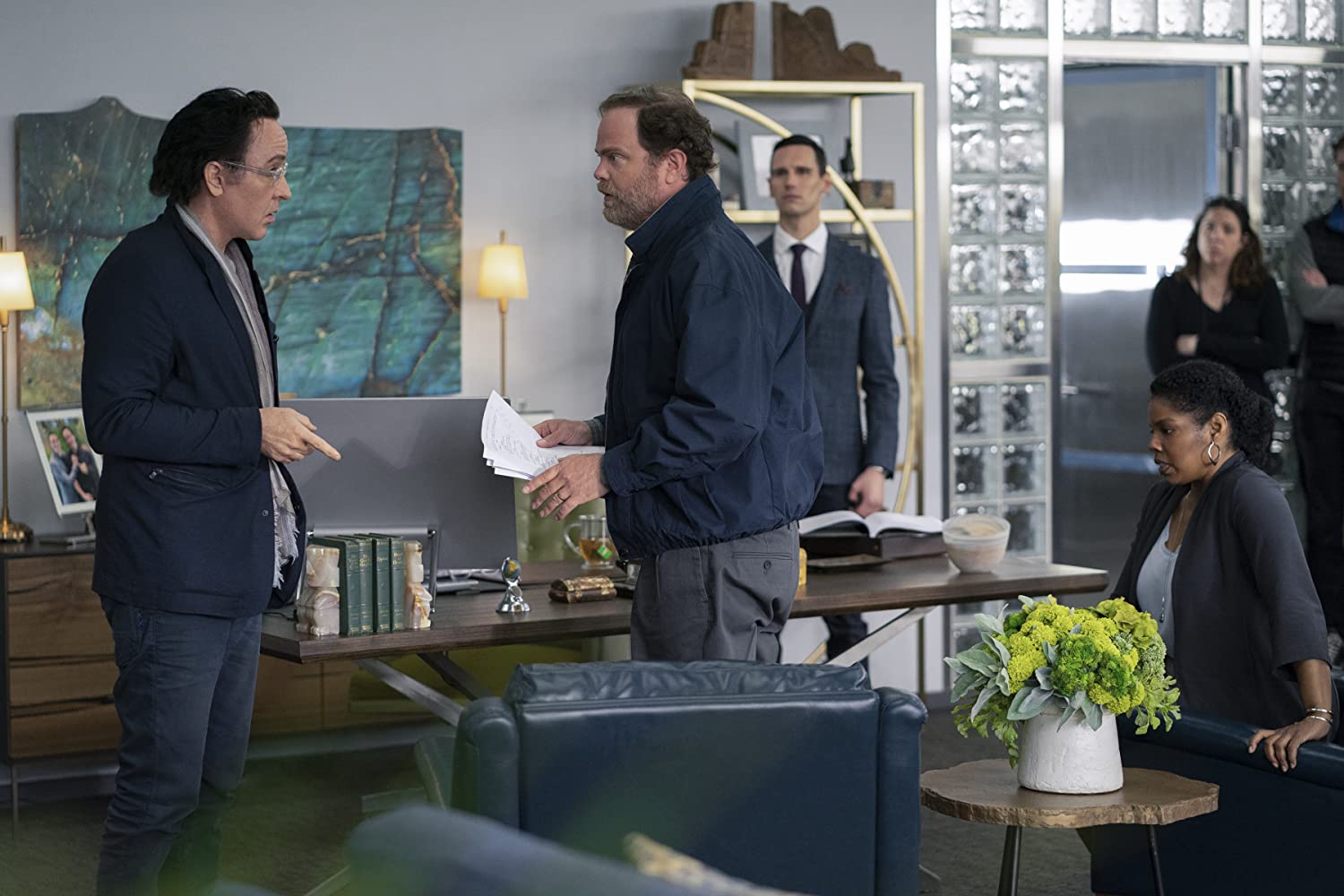 During their accidental conspiracy involvement, the not-so-fantastic Utopia savants are shocked to learn Jessica Hyde is a real person. Played with unyielding determination and deadly grit, Sasha Lane nails her role as the broken, morally ambiguous antiheroine out for revenge. Watching an actress exhibit laser-focused vengeance hasn’t been this captivating since Uma Thurman in Kill Bill.

Despite its relevant subject matter, Utopia feels oddly dated in presentation. The scheming villainy is transparent and unremarkable, leaving little in the way of genuine menace. Some nice twists and an open invitation to speculate theories do, however, add to the show’s engagement factor. Still, if an archetypal young band of heroes is the most fascinating part of a show that speaks to our rising concern of flu epidemics, then the material is wanting. Gillian Flynn settles for a stylish, lore-heavy unfolding of events rather than use our current fears to propel the narrative forward. Utopia might be a bloody, pulpy, kick-ass ride to the truth, but the truth itself doesn’t match the real terror it’s inspired by. 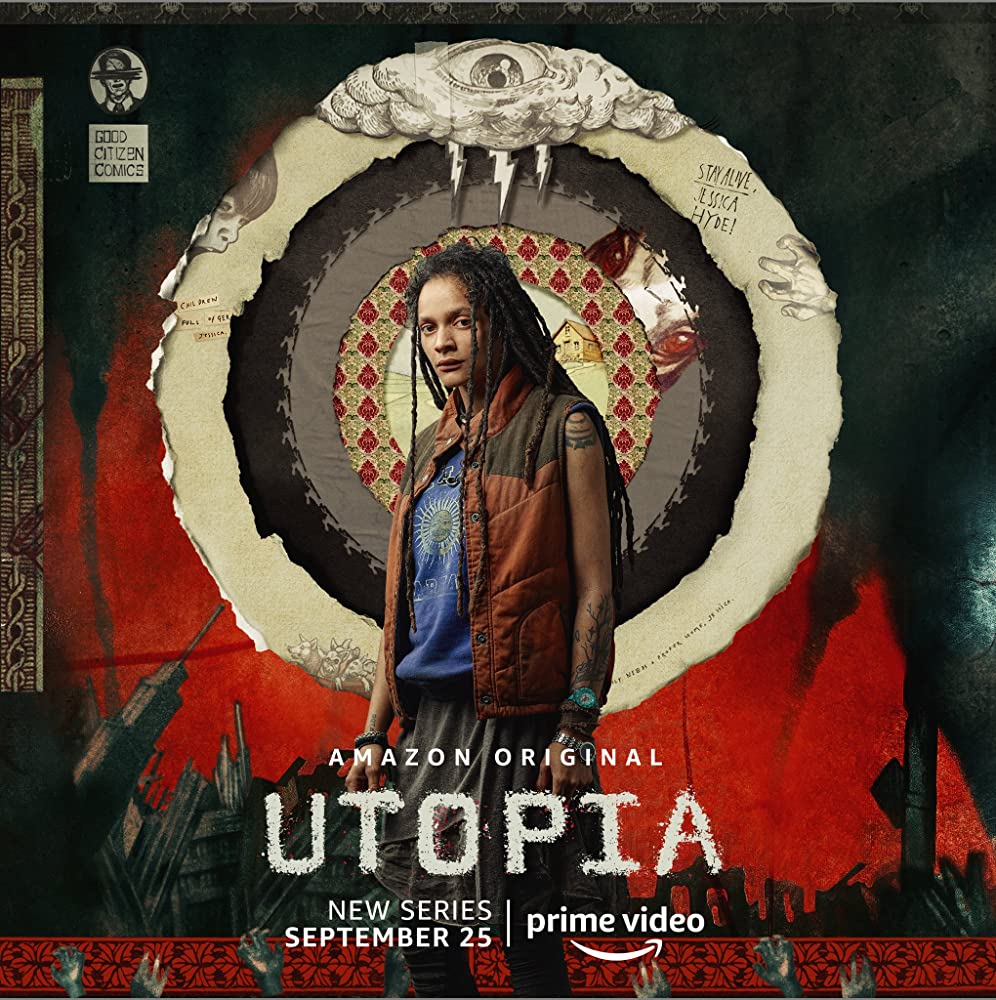 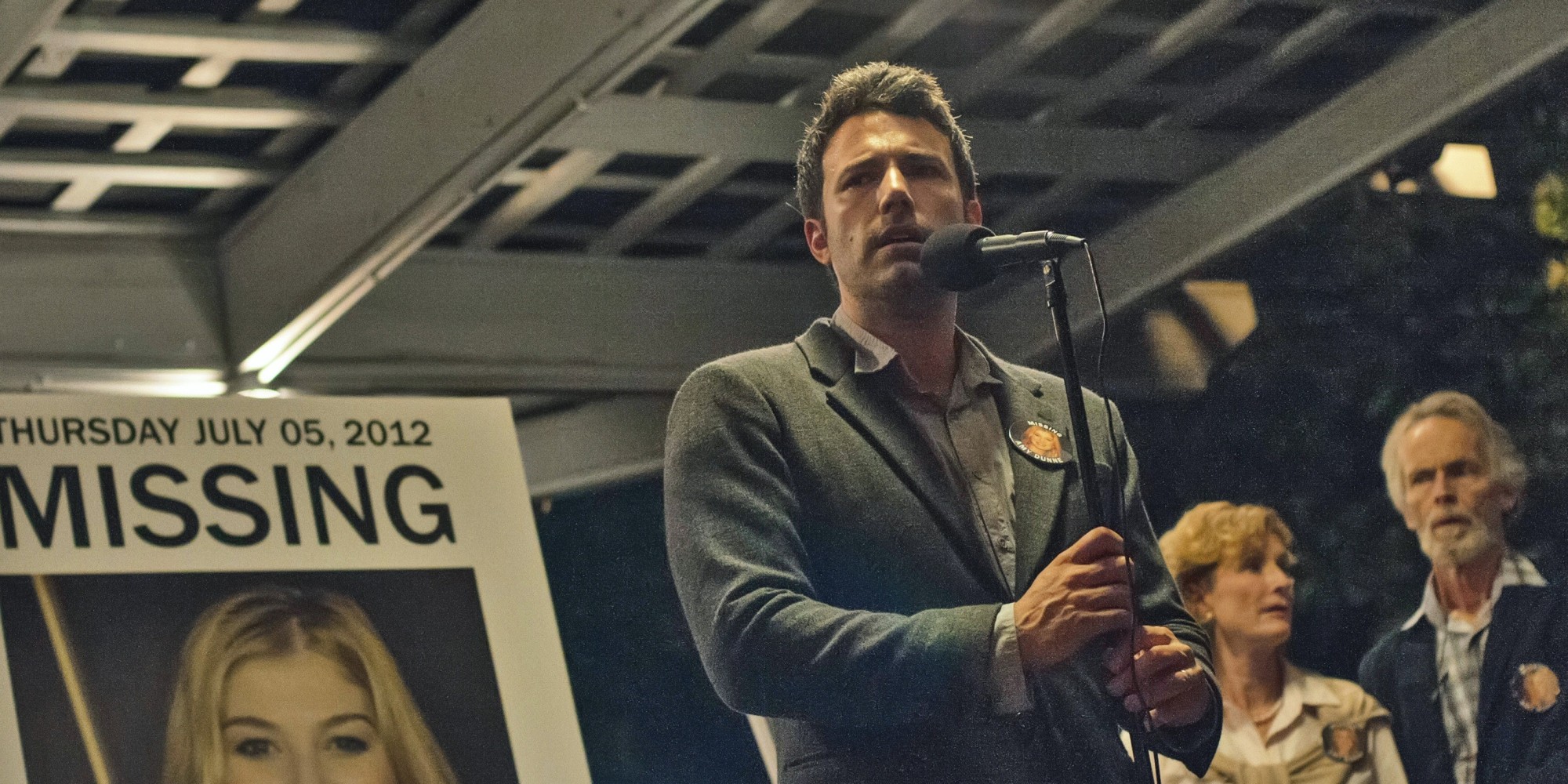