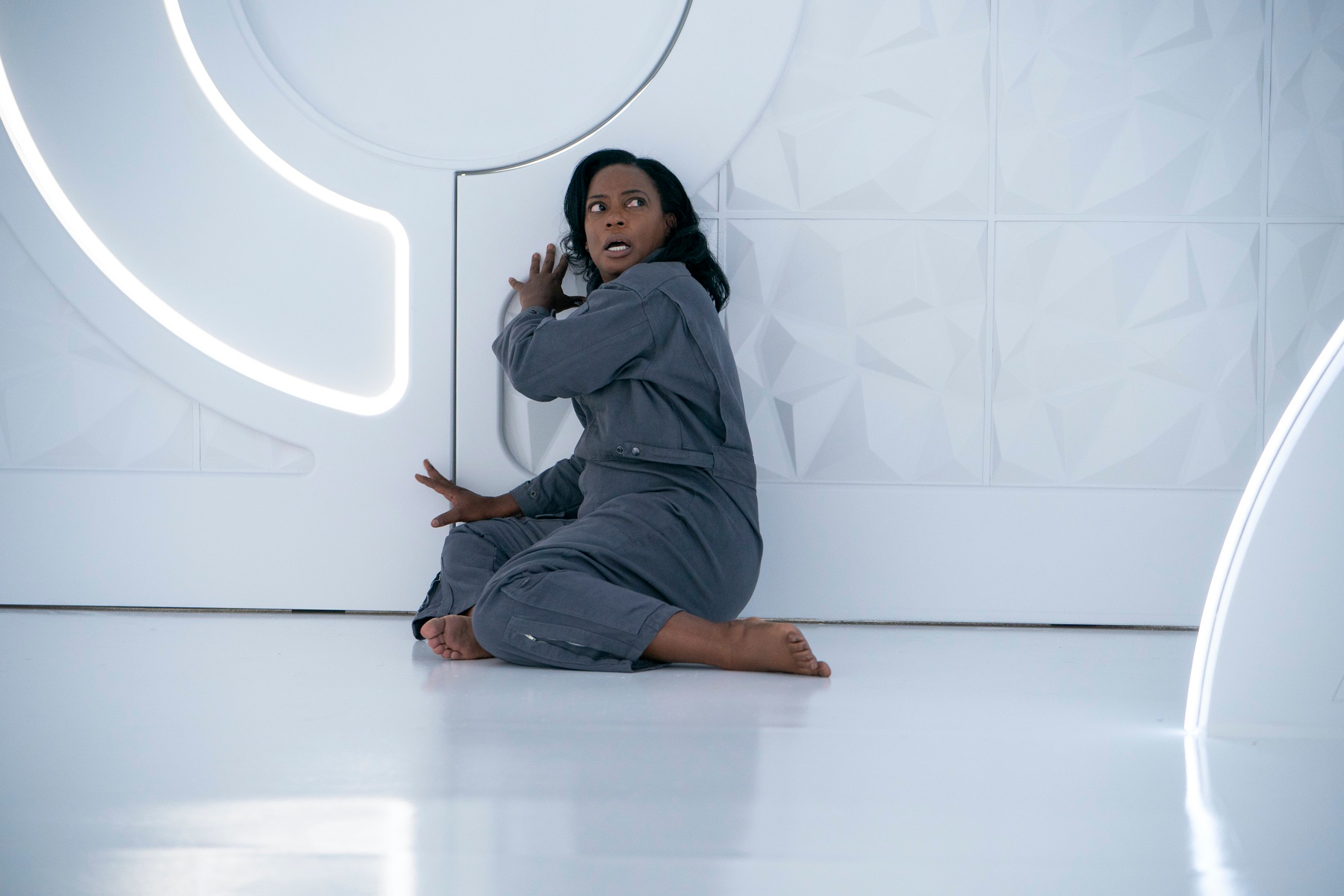 Whew! Episode 7 of Lovecraft Country was a lot in all it’s splendid, multi-dimensional afro-futurism glory. “I Am” picks up right where episode 6 left off. The show opens with Hippolyta (Aunjanue Ellis) still trying to figure out Titus’ horary as she continues to get more and more frustrated. She feels defeated and whispers to George (Courtney B. Vance) that she can’t figure it out and has failed when — right at the moment when divine intervention hits and figures out how to unlock it. So get ready for a wild ride — she’s on a quest for answers.

On the other side of town, Ruby (Wunmi Mosaku) is still reeling from finding out William (Jordan Patrick Smith) has actually been Christina (Abbey Lee) the entire time and is pissed for being lied to, feeling used. But Christina finally opens up to her, and we find out why she did it (part revenge for her dead lover William and part wanting to prove her father and the order wrong about women). The episode then jumps over to Tic (Jonathan Majors) and Leti (Jurnee Smollett), who realize they have been having the same dream in the burning house. As they try to decipher the dream, they realize that while Christina is after the missing pages, they will need the entire book because it will tell them how to do the spells. But Atticus will need to find out more about his mother’s side of the family to find them, so they head to Montrose’s (Michael Kenneth Williams) for clues. As they approach Montrose’s place, he argues with Sammy (Jon Hudson Odom), and they catch them in the middle of it. Now, with Montrose’s secret out in the open, the father and son have an emotional and violent confrontation where Tic calls his father out by his name.

Atticus and Leti get there next clue and make plans to head to St. Louis to track down Atticus’ cousin; they rush to Hippolyta to see if they can borrow the car. Things are still icy between them because she now knows they are not telling the truth about her husband’s death. She says no and heads off on a “guide book trip,” forcing Tic and Leti to opt for plan b. Leti ends up staying behind to try and patch things up with her sister, Ruby, and ends up finding the horary, figuring out Hippolyta is in danger and that she might be pregnant. Atticus gets another clue in a matching birthmark and runs to aid Hippolyta (does Tic have Braithwhite magic and ancestor magic in his blood?). He shows up just in time as she has discovered a dimension altering machine, but two white cops have caught her. A scuffle ensues, and they accidentally open up a portal that sucks Hippolyta and Atticus in. 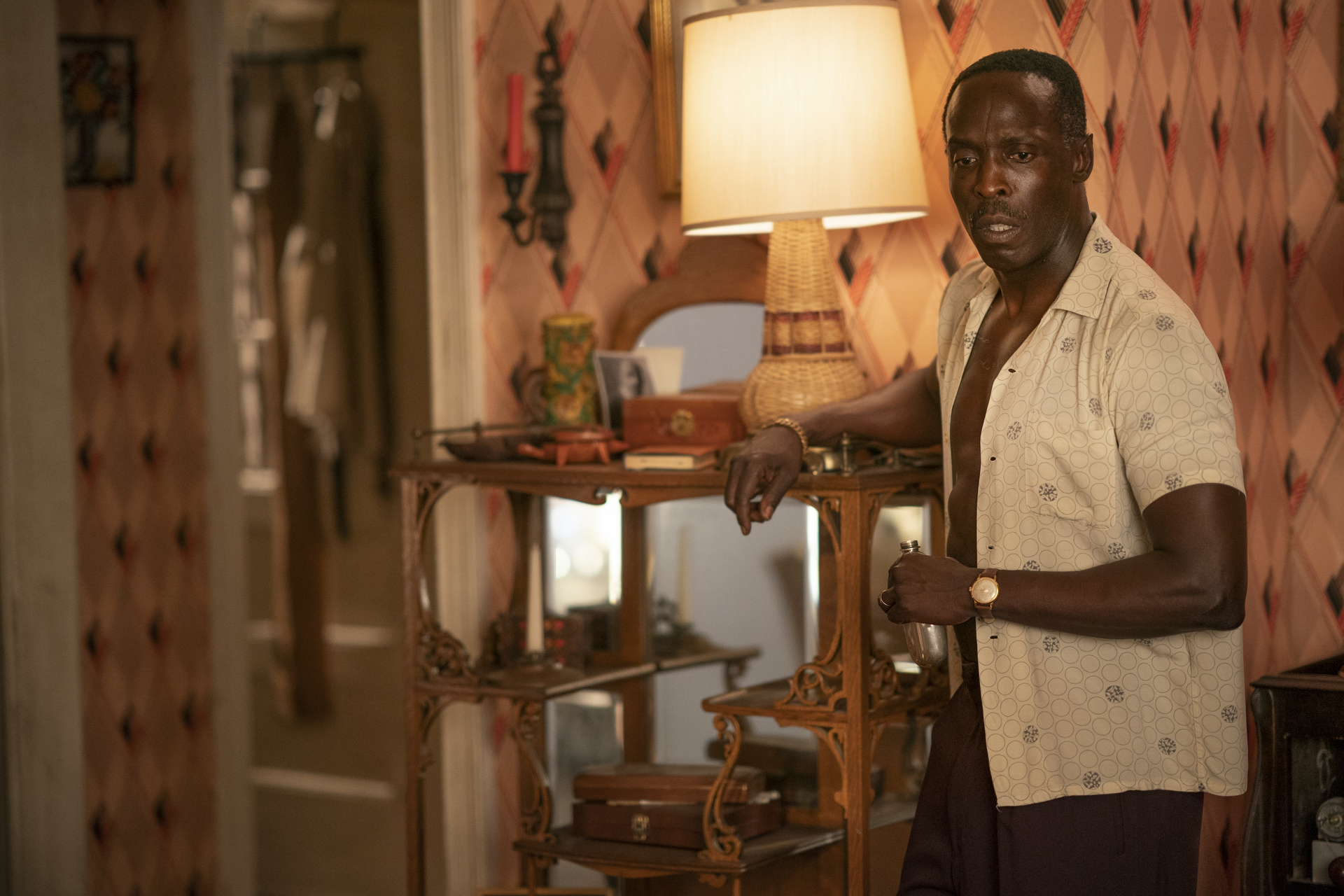 This is where things get trippy, and the episode’s title, “I Am,” comes into play. Hippolyta gets taken in by the futuristic Seraphina AKA Beyond C’est (Karen LeBlanc) and her amazing afro. She takes her on a time journey to find and free herself along the way. Hippolyta thinks she’s in a prison, but Beyond C’est (an ode to Beyoncé if you say it out loud…or beyond “it is” (c’est in French)) is really trying to free her from the prison she is already in. She tells Hippolyta she can be whoever she wants to be as she begins to live her dream of taking the stage in Paris in the 1920s with Josephine Baker (Carra Patterson). Her time in Paris frees her mind as she is opened up to a lifestyle and freedom she has never had before. Her time with Baker is not only eye-opening but also life-changing. There’s even a cameo by Frida Kahlo (Camila Canó-Falviá). It is a scene filled with feminine power in all its glory. As Baker and Hippolyta have an emotional heart to heart about Hippolyta’s hatred, rage, and anger towards white people, she exclaims “I AM HIPPOLYTA,” as she is transported in the world of the Dahomey warriors (the real-life, all-female tribe of African fighters who fought against white colonizers). It is here where she becomes a badass warrior and realizes her true power.

From there, Hippolyta takes her last journey to reconnect with her husband and really open up about how she felt. She tells him about her otherworldly travels and how she has finally found herself — she has named herself. She continues on with the uncomfortable, but needed conversation and finally tells George what it was that was eating away at her. She’s been angry all of this time because, for so much of her life, she has been shrinking herself — for society, for white America, for her husband — and George just stood by and let her shrink herself even more. It was like “being lynched without the noose” to have to dim yourself and not live your truth or be seen to fit into white society. But now, she is claiming herself, “I am Hippolyta, Discoverer.”

She then takes George to a different planet in a scene straight out of a campy 1950s B-movie, where she has to make a tough decision — does she stay traveling the dimensions and fully integrate into Beyond C’est’s society permanently, or does she go back home? She decides to return home to her daughter but is returning as a much different Hippolyta. The portal then shoots Atticus out, and he frantically searches for Hippolyta so that they can escape. He flees before the cops come, and then we pan up to the dead cop that Hippolyta shot, with Diana Freeman’s comic book laying in his puddle of blood. So we know that things are about to get a lot more serious and dangerous for all involved. 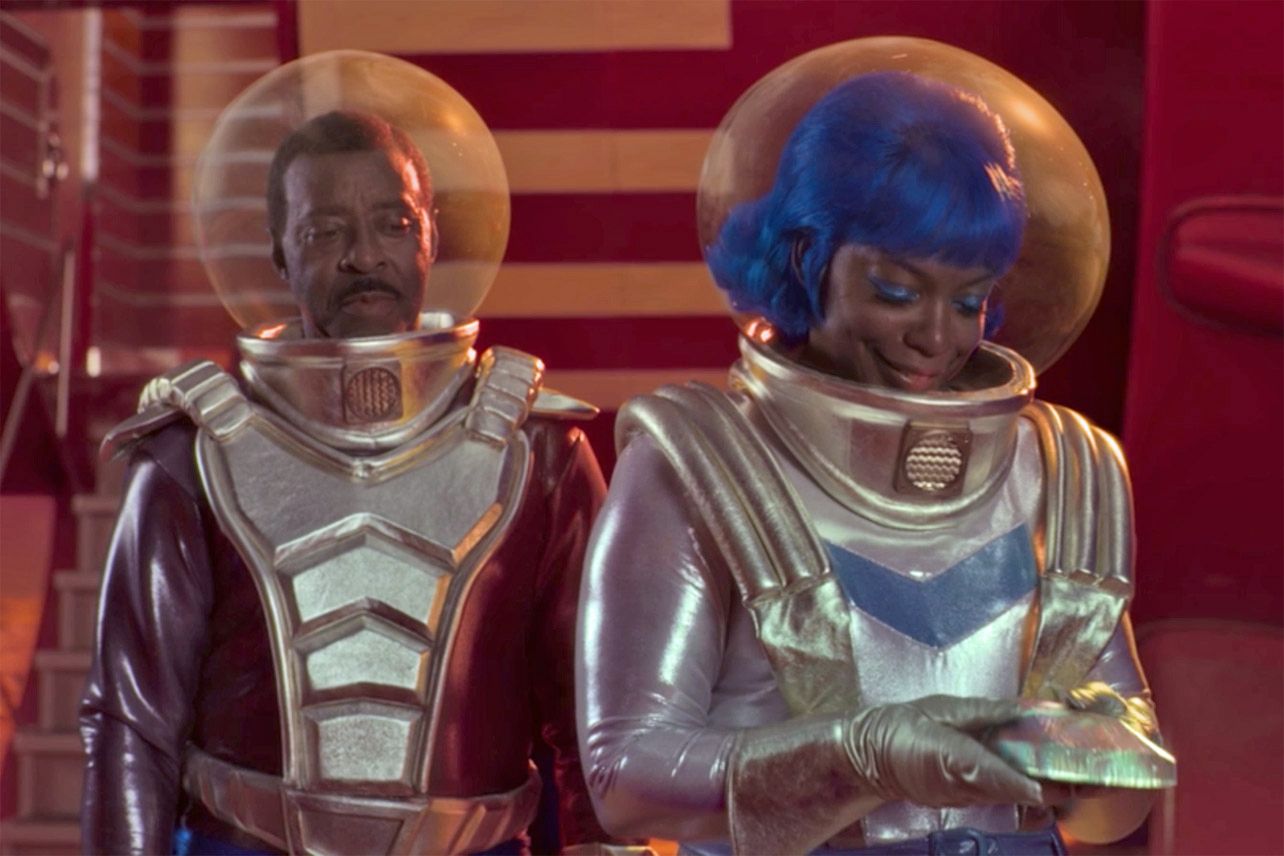 As usual, the episode keeps viewers intrigued and rapt in the story. “I Am” ends with so many questions and ways it could go. Leti and Tic’s unborn child is in danger as he could pose a threat to Christina. Where is Hippolyta, and how changed is she? Where did Tic go in the portal? And as usual, the “I Am” episode dropped lots of black history gems — Josephine Baker in Paris or Bessie Stringfield (the black female motorcyclist that passes Hippolyta on the road — she road alone across America in the 1930s).

There’s also a feminist bent (especially Black females) to this episode — it talks about women’s rage not being ladylike or how violence is not becoming, but this episode turns that on its head. And it can even be extrapolated out to Black people, in general. It is ok to be angry. We have a right to be. But we are no longer just a myth — we should live in our entire reality, be all the things that we are, and not shrink ourselves to fit into this society. It is about claiming your rightful space.

Black people, especially black women, are not usually seen in the fantasy genre space, but here it is in all its splendor and wonder — it is afro-futurism at its best. The show creates all of these epic worlds and lets us live vicariously through Hippolyta. And you gotta give it up to Aunjanue Ellis, for she was a beast in this episode — her unbridled confidence and feminine glory was inspiring. 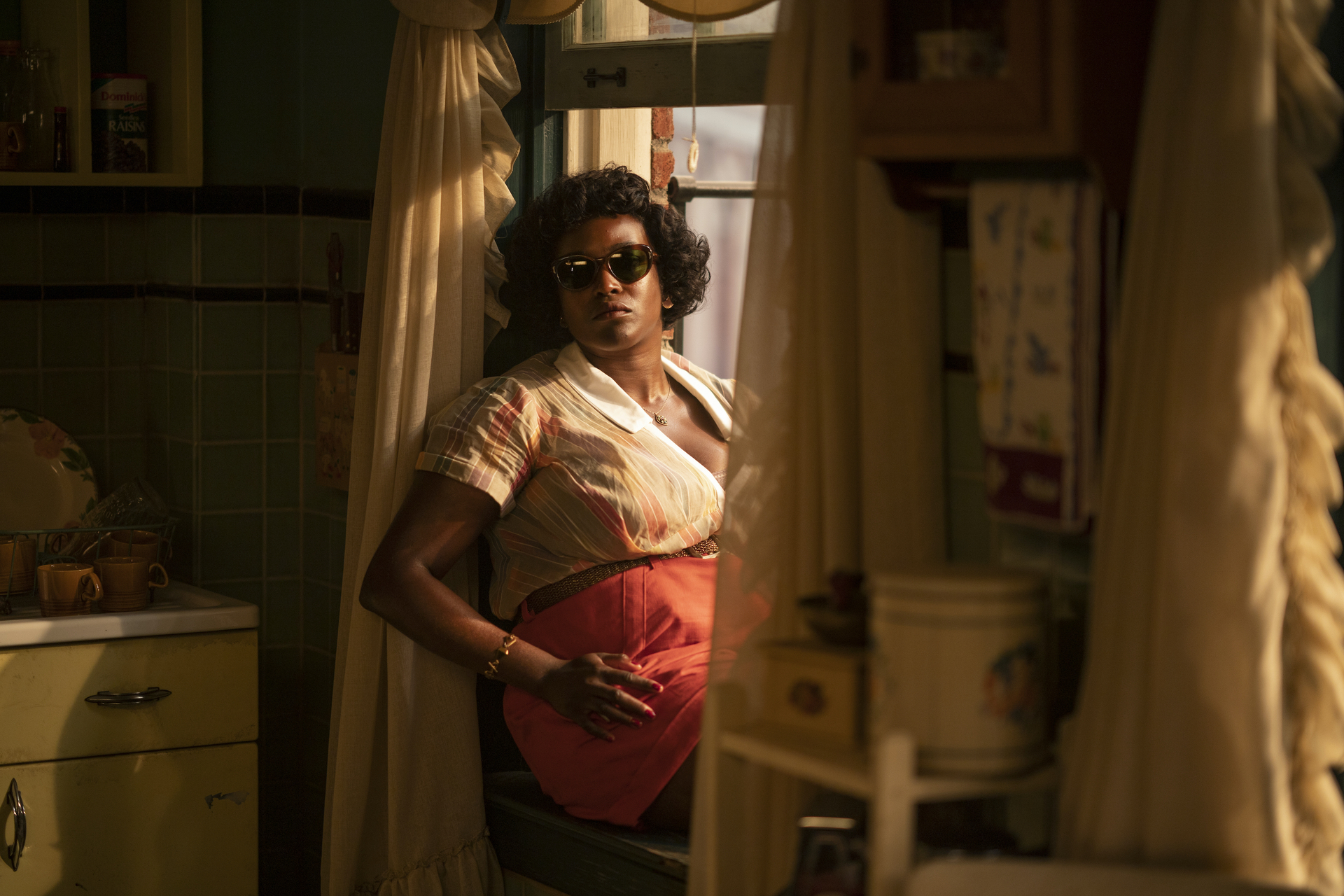 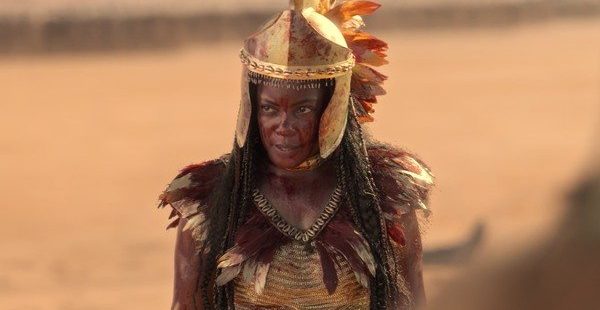