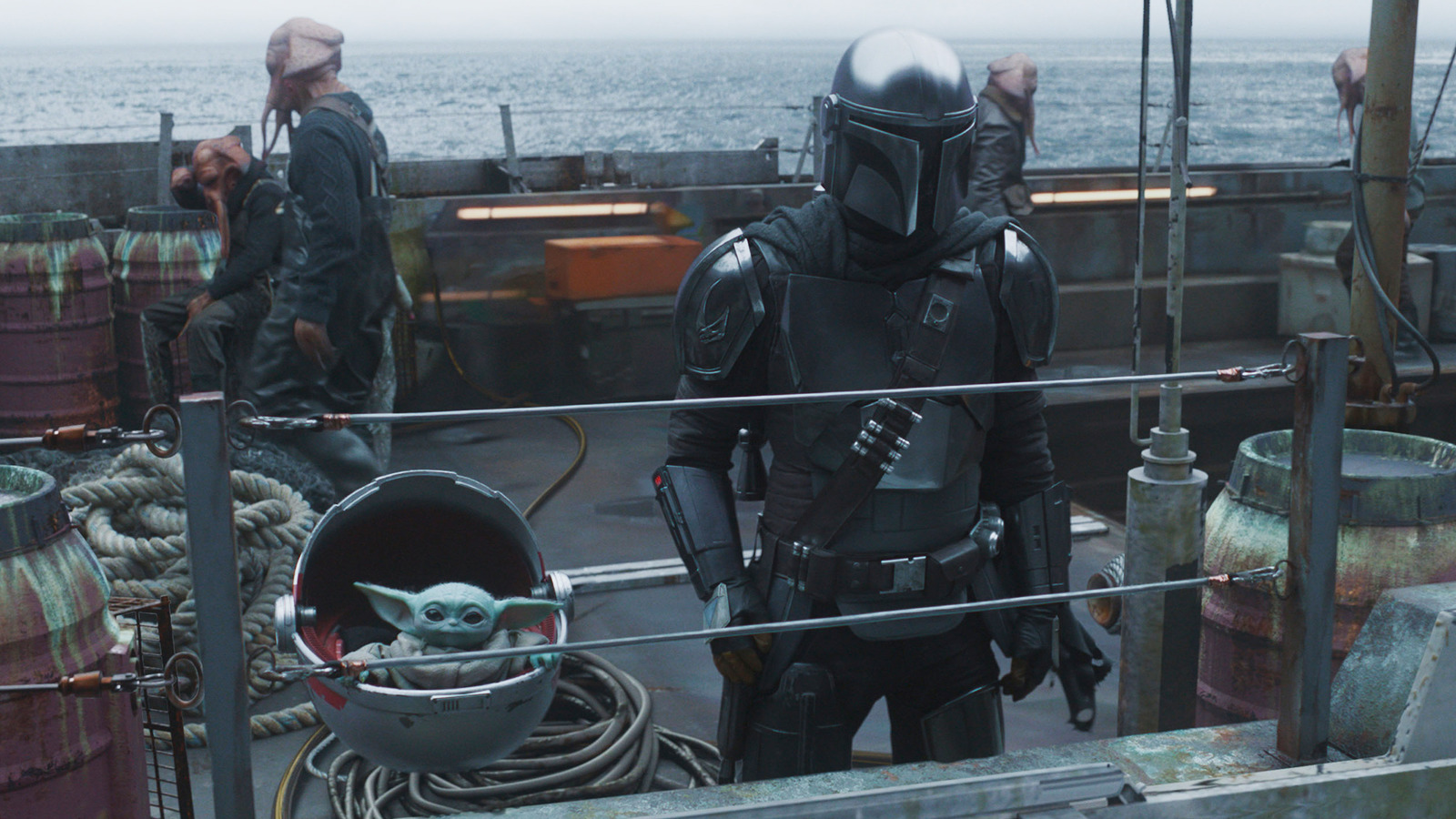 After surviving an onslaught of ferocious spiders, the worst Uber ride in galactic history finally reaches its destination. Barely. Din Djarin’s prized ship, the Razor Crest, nearly combusts upon entering Trask’s atmosphere and subsequently topples into the ocean after a lop-sided landing loses its battle with gravity. Before the Kraken can consume our danger-prone pals — fear not, that comes later — the spaceport’s Mon Calamari workforce hoists the ship out of the raging sea. Instead of giving proper thanks, Mando hands them 1,000 credits to refurbish the Crest. As it turns out, even sizable payments can’t guarantee a quality extreme makeover.

The stress of arrival dissipates when Frog Lady reunites with her husband (Frog Man, naturally), though Baby Yoda isn’t keen on parting with his embryonic food source. He’ll just have to contend with the local cuisine, which should come with a warning: eat your food before it eats you! Watching Baby Yoda get a face full of alien facehugger is sure to instigate a massive giggle fit. While dining at the tavern, Mando and the Child encounter a Quarren with information regarding the whereabouts of other Mandalorians in the vicinity. To receive it, Mando must agree to voyage by sea. Sensing an ambush too late, Mando and his little foundling fall through a trap door in the hull, straight into the cold ocean below where a massive underwater monster waits hungrily. The beast spares no time swallowing Baby Yoda’s floating crib whole, with Djarin also in the fray of meal consumption. 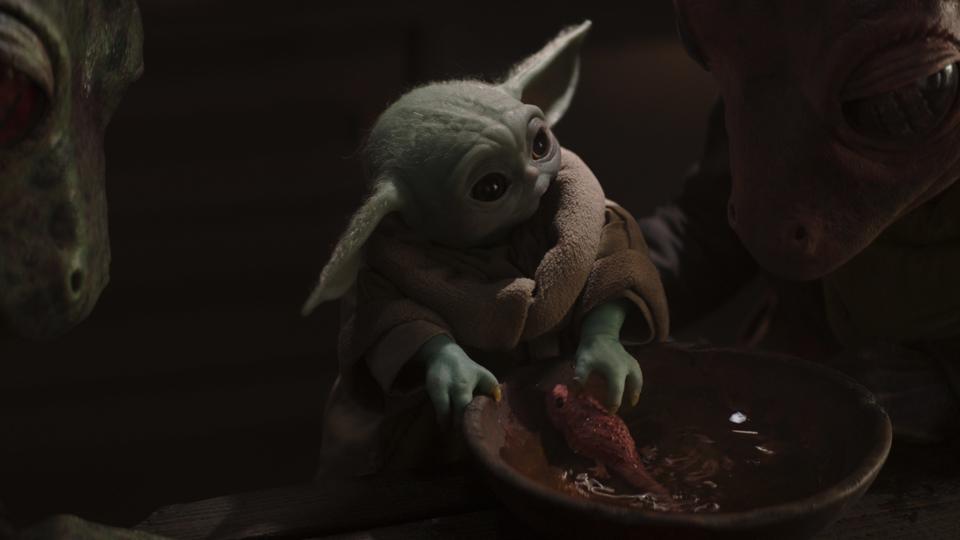 Just when Djarin is about to experience a slow digestion cycle à la Boba Fett, three of his kind suddenly appear on deck to save the day. After neutralizing the Quarren thugs and rescuing Mando and the Child, the trio’s female leader reveals herself to be Bo-Katan (Katee Sackoff), heiress to the throne of Mandalore. But her true identity isn’t the only one unmasked — it turns out Din Djarin is a child of “The Watch,” a religious extremist group of Mandalorians who split from their creed to join the Empire during their planet’s Great Purge. The Imperial invasion split the warrior race into rival factions, leaving Mandalore without a ruler to unite its people.

Sackoff fits her helmeted role like a glove, imbuing the fan-favorite Mandalorian princess with grit and tenacious resolve, yet still willing to concede a smirk or two. She’s also not afraid to bend Mandalorian traditions if it means getting closer to reassuming control of Mandalore’s dispersed population. This involves changing the terms of her agreement with Mando, ensuring the ex-Bounty Hunter is about to put in a lot more blaster fire than he bargained for. If Djarin agrees to assist Bo-Katan and her entourage — fellow Mandalorians Koska Reeves (Mercedes Varnado, also known as Sasha Banks in the WWE world) and Axe Wolves (Simon Kassianides) — he’ll receive the location of ex-Jedi Ahsoka Tano in return, who might know more about the Child’s origins.

The Mandalorian trio plan to hijack an Imperial remnant cruiser that’s stationed on Trask. Not only will they be able to recover stolen weapons from their native planet, but Bo-Katen intends to hold the ship’s captain (Titus Welliver) hostage so he can lead her to her true target: Moff Gideon (Giancarlo Esposito). As we saw in the season finale, the former Imperial Security Bureau officer has the Darksaber, the holy weapon of Mandalore, whose wielder automatically entitles them leadership privileges. With the Darksaber back in her grasp, Bo-Katan can once again reclaim House Kryze as the rightful rulers of the Mandalorians. Suffice to say, the stakes could not be greater. 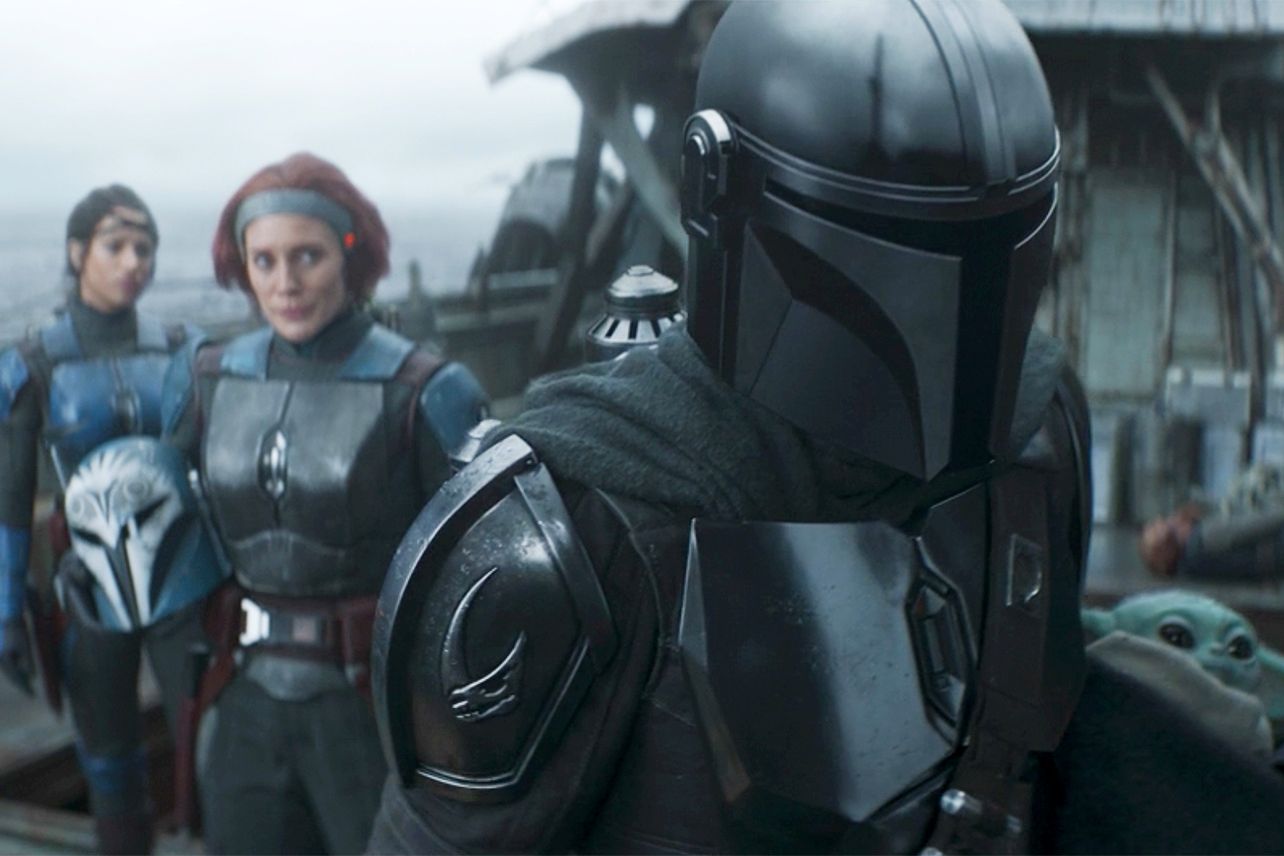 As always, things go haywire, but the frenzy is a spectacle to behold. Bryce Dallas Howard’s second directed episode of the series proves to be just as humanistic as her first, but this time the action raises its intensity bar. Hallway shootouts and a massive ship in kamikaze descent will keep you holding your breath for Mando’s swift success as time runs out. Fear not, Baby Yoda is being properly babysat by the Frog couple during all this chaos, mesmerized by adorable tadpoles who recently hatched.

“The Heiress” surges the quest ahead while filling in missing gaps from our protagonist’s traumatic past. Mandalorian mythology is enriched, and fan favorites play key roles in the wake of a post-Empire galaxy. If this isn’t enough to enthrall viewers into repeatedly tuning in, perhaps a bolt is missing from their hardwiring. For now, a Clone Wars legend awaits her cameo, and a new Star Wars icon in Bo-Katan is cemented. The expanding universe is merrily upon us.

The second season of The Mandalorian is currently streaming on Disney+ 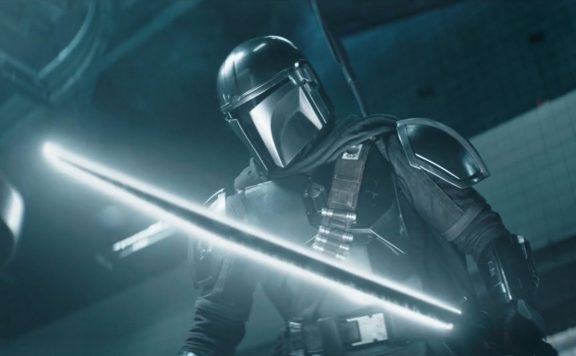