The Walking Dead: ‘Rock in the Road” Midseason Premiere Review

Warning: This midseason premiere of The Walking Dead is covered with spoilers.

Ah, yes, The Walking Dead midseason premiere. Normally, when the series goes on its midseason hiatus, it’s the most painful feeling in the world. However, since, in my opinion, this current seventh season has been quite a drag with its pacing, and with many of the previous eight episodes focusing on characters most fans don’t care about, a break, for me at least, was very much needed. To tell you the truth, I wasn’t even totally psyched for this midseason return. Fortunately, “Rock in the Road” doesn’t waste any time and continues right where “Hearts Still Beating” left us back in December. Rick is finally ready to lead his people into a war for freedom against The Saviors. In this episode, Rick and the gang do a little bit of recruiting.

Unfortunately for Rick and his people, building a rebellion takes time and a lot of rejection. That’s mostly what we saw throughout the episode as Rick did his absolute best to convince the leaders of Hilltop and The Kingdom to join the fight, to get their people ready for battle. I knew right off the bat Gregory was going to say no. He’s a spineless weasel who’ll avoid any kind of confrontation. I gotta give it to Xander Berkeley for this scene though. Gregory is such an ass, such a coward, but Berkeley plays him so perfectly. Fortunately for Rick, the people at Hilltop are looking to Maggie to train and lead them without Gregory’s approval. This is thanks to Enid for some strong storytelling.

King Ezekiel wasn’t as resistant and ignorant as Gregory. Even though his final answer to Rick was no, you could almost understand his position. Plus, I get the sense he has his own plans for The Saviors, seeing as how he’s been giving them tainted meat and all. He at least gave Rick’s proposal some thought and offered Daryl asylum. Ezekiel simply doesn’t want to put his people at risk, nor disturb the arrangement he has with The Saviors. The fact that The Saviors have never stepped into The Kingdom is quite an accomplishment for Ezekiel. And for a time, I thought Ezekiel was going to agree to fighting with Rick, especially after Rick tells the story of the rock in the road. Eventually, I’m sure, Ezekiel will see the importance of joining the fight against Negan and The Saviors. Maybe with Daryl staying behind, he’ll be able to rally up more people in The Kingdom to join the cause. I doubt Daryl possesses any diplomatic skills, so he’ll probably force Ezekiel into joining up with Rick. Richard is definitely on board, and seems likely to defy Ezekiel if he has to. There are people in training to become strong, so it’s very likely The Kingdom will become Alexandria’s immediate ally with or without Ezekiel’s approval anyway. It might take an attack by The Saviors to get the ball rolling. Such an outcome seems very likely.

Either way, it sure was great to spend time in the Kingdom. Even though we know Ezekiel’s manner of speaking is an act, it’s still satisfying to witness his delivery of dialogue. I love, love, love seeing the reactions of Rick’s group as they become acquainted with King Ezekiel and his tiger. At least Rick now knows Morgan is safe. Morgan continues to disagree with Rick’s methods, so like Ezekiel, he only wants peace. He won’t be much help to Rick, at least, not in the immediate future. He even lied about Carol being gone, which is noble since Carol wants to be left alone. Rick could definitely use Carol right about now. Ironically, Ezekiel, Morgan and Carol are all similar in the way that they all want peace. But as long as Negan is around, that won’t truly happen. They need to be on board with Rick’s plan. 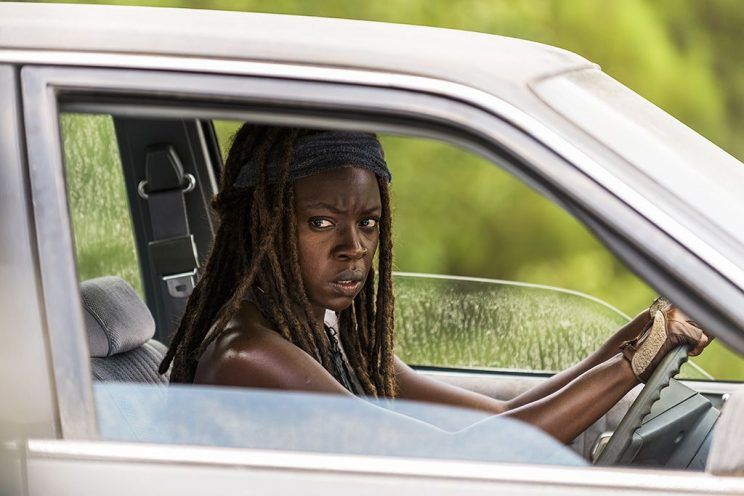 The Savior’s blockade scene was the highlight of the episode. Ironically, the most suspenseful scene was watching the team disarm and garb all the explosives off the cable. This had to be done before The Saviors arrived at Alexandria. The race against time aspect is what made the scene so intense. The payoff was the bloody massacre of walkers being sliced by the giant metal cable as Rick and Michonne drove the cars that had the cable attached to them. I missed watching Rick and Michonne work together like that. It was kinda sexy.

We didn’t see Negan this week (though, he was heard giving orders on the radio), but we did see Negan Jr. aka Simon (Steven Ogg) who led the search party for Daryl over at Alexandria. As much as he makes my skin crawl, it’s always a treat to see him do Negan’s dirty work. Although it was easy to take a breath knowing he wouldn’t find Daryl, there was still the uncertainty of what could have gone down while The Saviors were ransacking the place. But everyone kept their cool, and the scene was over without bloodshed.

So what exactly is Gabriel up to? We know he didn’t just cut and run with all the food and supplies. He clearly wants to be found by Rick. Does this have anything to do with the mystery boot wearing stalker that’s been appearing throughout the season? I really can’t wait to see what the outcome of this new scenario is. Maybe he will pop out among the new group of people who are currently aiming their weapons at Rick’s group. Perhaps Gabriel took these people food as a peace offering in order to get them to join the resistance. Maybe that’s why Rick is smiling. Lots of mysteries surrounding this new development.

What I truly liked about this episode was we got to see the group together, working together. Even if most of the characters were just walking with the group not saying nothing, at least they all, or mostly together. Rick is focused. He wants to fight, and not out of anger, but necessity. This was indeed a good episode for Andrew Lincoln and his character. This is how I like to see Rick. I like seeing that everyone is trusting him again. It brings back a bit of normalcy to the show after seeing our bad asses down and out from the first half of the season. Rosita and Daryl are motivated by anger though.

This was a decent return from the two month wait as long as you kept your expectations in check and didn’t expect a big event. I sure didn’t. This episode’s job was to give us the foundation of a rebellion and the rough path Rick and his people will be walking. There was no need for a major death, no need for numerous scenes of zombie killing. It just needed to plant the seeds of the resistance. For the most part, it succeeded. We didn’t always get the answers we wanted, but there are people who clearly want to rebel, even if they must go behind their leaders’ backs.