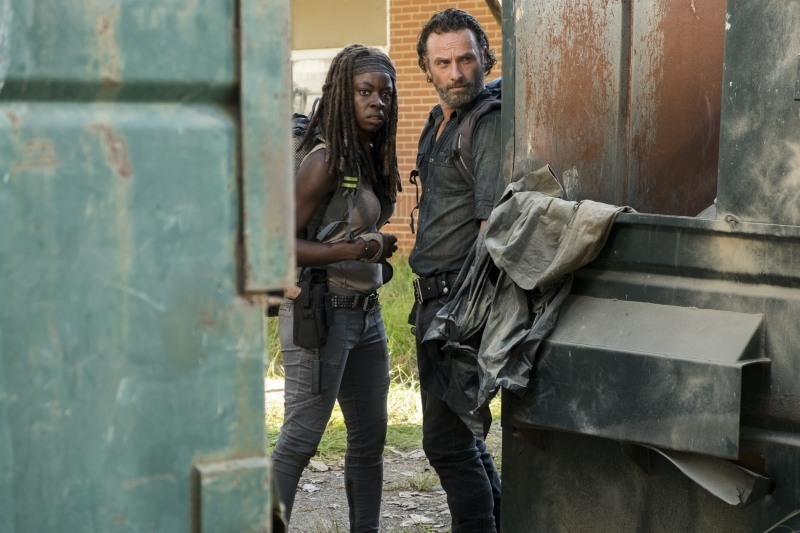 Warning: This episode review will have spoilers. So beware.

After quite a few episodes this season that focused on characters I personally don’t give two shits about, it’s very nice to watch an episode with the two I care about the most. “Say Yes” centered around Rick and Michonne while they were on a road trip searching for supplies and guns for themselves and Jadis. Progression towards the uprising was minimal, but this turned out to be quite a satisfying episode complete with loads of walker killing and terrific chemistry between Andrew Lincoln and Danai Guirira.

Like so many members of their group, these two have suffered with so much loss and pain. When they became an item, it made perfect sense, and never felt forced. They needed some bit of happiness during this bleak and violent life they have to live in. Given all the horrors they’ve endured this season alone, it was so cool to see them happy and in love. They’d scavenge by day, have some laughs, and have sex by night. Then they’d wake up and do it all again. Rick even tried to extend their trip, insisting there was no hurry to get back home. At first, I thought he was trying to stock up on as many supplies and cover as much ground as possible. Then it became more clearer, he was just trying to spend more time away with her. Talk about relationship goals

Because the show has to spread itself out with the amount of time it showcases its numerous characters and relationships, we get the sense that Rick and Michonne have been working at this for a long time. Yet, this is pretty much the first time we see them as a couple. And talk about a power couple. Not only was it cool to see them slay a vast amount of walkers at the broke down carnival they found, it was awesome to see them work with so much confidence. Even when Rick’s strategy failed, they’d laugh about it and keep slaying walkers. I never get tired of watching Michonne swing that sword around. This episode did a terrific job reminding us how bad ass these two are. They are basically an army of two.

Bad assery aside, Rick and Michonne are still just people. People with vulnerabilities. Michonne almost gave up on living after a brief moment where she thought Rick was overrun by walkers. It was a pretty weak fake out, but it captured the effect Rick’s death would have on her. The idea of Rick getting killed turned this fierce warrior into someone who was just about ready to die. In her mind, she has lost a lover once before, so she can’t lose another. It would break her. That’s why it was so important for Rick to remind her of their circumstances. She has to be prepared for his possible death, and he with her’s. The future war with the Saviors is going to have casualties. People they care about are going to die. So they have to be prepared for it. And so do us viewers.

In that scene, Rick mentioned Glen. He is torn by the fact that Glen was the first person to save his life, but he couldn’t save his. Yup, as a long time watcher. It definitely kicked up the feels. 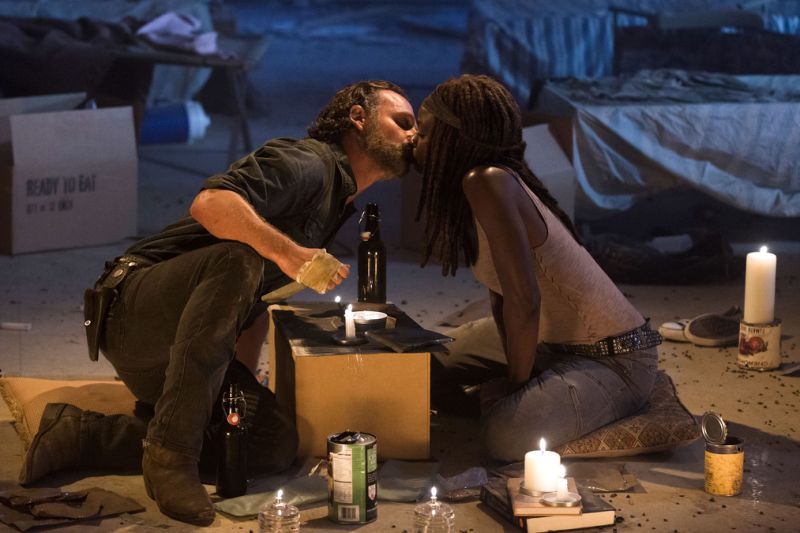 Tara spends her down time trying to decide if she should tell the group about the “women only” Oceanside group with the full arsenal. Um, yes. I understand she’s trying to do the honorable thing by keeping the group a secret because of the girl who saved her. However, with weird ass Jadis not being satisfied with the 60+ haul of guns Rick brought to her, Tara has to use the necessary option and tell Rick. That conversation takes place off camera, so we don’t know exactly what she told him, but it has to lead them to getting those guns. Perhaps even convincing the women of Oceanside to fight with them. As Tara mentioned, the Saviors killed all of their men. Some of those women might want a little bit of payback.

Then there’s Rosita. Ay Rosita, baby, I want to root for you, but you’re making it hard to even like you. Arguably, Rosita has far better material to work with as she seeks revenge. I just wish she’d dial back the anger a bit. Now she’s blaming Gabriel for talking her out of killing Negan. Kind of weak she’s lashing out on him for her own screw up. She’s the one who decided to take the shot out of anger, and she failed. Now that she got her hands on a sniper rifle, she makes an uneasy alliance with Sasha, in what sounds like a suicide mission. Does this girl know nothing about strategy? I’m sure Abraham taught her some. Sadly, she’s letting her rage guide her, and that can lead to her demise before she’s able to make any impact on the war against the Saviors. I just don’t want her to drag Sasha with her.

“Say Yes” was a fun episode with some good action, romance, and humor, mixed in well with some good dramatic moments. It was a welcomed light episode for the most part. Killing a bunch of walkers at a carnival sure looks fun. Rick and Michonne make it look so easy. The time spent with those two made this a memorable hour of The Walking Dead. Sadly, that terrible CGI deer will be remembered for a long time too.