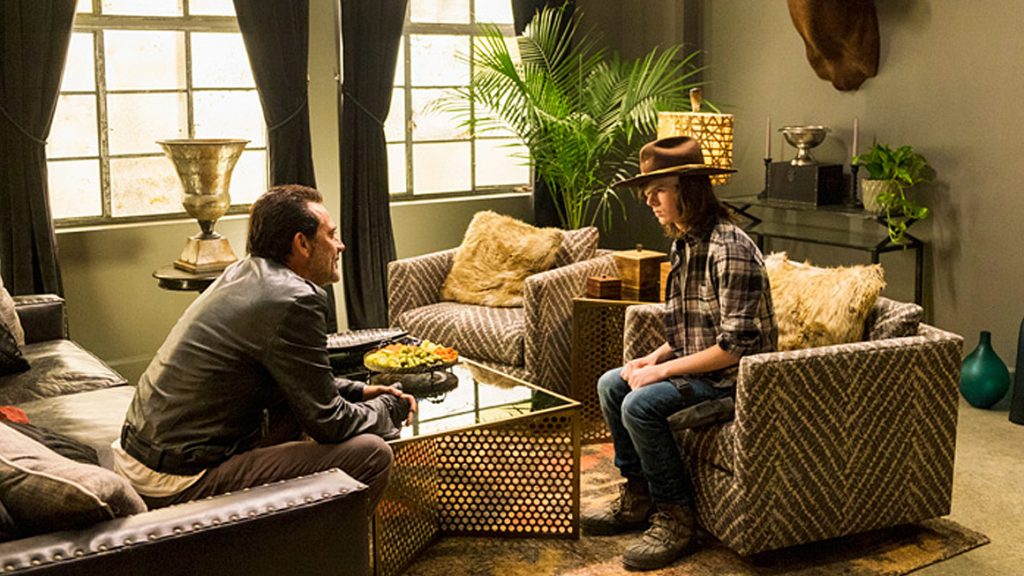 The Walking Dead: ‘Sing Me a Song‘ Review

Warning: Full spoilers on display for this review… because, I mean… It’s Walking Dead.

Right now, I feel like swinging a barb wired baseball bat, arching my back and saying: “That’s more like it!”. Yes, thank the TV gods. After testing mine, and from what I saw on Twitter and Facebook, mostly everyone else’s patience with that unnecessary Tara episode last week, we finally get back to the main part of this season which focuses on Rick’s group and the conflict with Negan in this bone chilling episode. No, I’m not calling last week’s episode a bad one, but did Tara really need an episode fully dedicated to her just to show a possible new group of allies or foes? I don’t think so.

This week, we got a little bit of everybody from Alexandria and Negan’s compound. Sadly, we still haven’t returned to The Kingdom with Carol and Morgan nor have we returned to Hilltop with Maggie and Sasha, but at least we saw more than half the rest of the cast.

Rick seems to be playing by Negan’s rules while he and Aaron are on a supply run for Negan. However, it’s been speculated Rick is only appearing to be Negan’s little bitch. It is entirely possible he’s planning to get enough supplies to satisfy Negan, but plans to hide food and weapons for his group. The jury’s still out Rick’s true intent.

Michonne is clearly not having any of this mess. Setting a trap for one of the Saviors was smart and cool, but I’m not entirely sure she’s thought her plan out fully by forcing a Savior to take her to Negan. Michonne scores major bad ass points for foiling her capture’s attempt to fight back though. 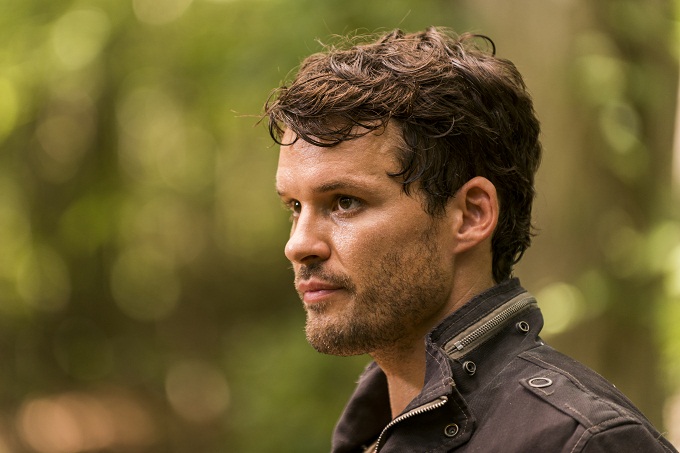 Spencer’s getting on my goddamn nerves. Still questioning Rick’s leadership, still complaining. Hell, even Gabriel told him to piss off in his divine way. However, Spencer may be revealing himself as a potential villain. He blames Rick for everything that’s gone wrong in Alexandria, including the death of his parents. He even admitted that he feels he would be a better leader than Rick, which made me scoff a bit. Something’s brewing with this guy. He might intend keep that bow and arrow he found and use it against Rick and anyone else who gets in his way. Now that Negan’s chilling on a pouch in Alexandria at the moment, he might use that chance to turn on Rick. Either way, he’s a snake and his numbered days may have been reduced. I hope so.

The real stars of “Sing Me a Song” without question Chandler Riggs and Jeffrey Dean Morgan as Carl and Negan, of course. Much like Negan see’s that fire and potential in Carl, I saw that fire in Chandler Riggs tonight. He went into full bad ass mode, gunning down two of Negan’s men and demanding Negan show himself. No wonder why Negan was impressed. But seriously, this was some of Riggs’ best work on the show. He showed a lot of range with various emotions on display. He was believable the whole way. We already know how damn good Morgan is as Negan. I’ve read some viewers and critics are already tired of Negan’s games and posturing. F**k that, the dude is killin’ it. He made my skin legit crawl so many times tonight, none more than when he picked up and held baby Judy. Morgan and Riggs were great together tonight. And I know this episode made fans of the comic happy with this dynamic between Carl and Negan being canon in the books. I’m just left wondering how far they plan on taking this though. I’ve been seeing rumors that Chandler Riggs may be leaving the show in favor of going to… pfft, college. Of course, those could be just rumors. I don’t read into them anyway.

More of Negan’s power was on display, and it seemed amplified. He really has a hold on everybody in his compound. I mean, he is outnumbered by the hundreds of people. He burns a guy’s face with a hot iron in front of everybody, and no one thinks to attack him? Not to mention the guy’s face he burned, Mark, had his girlfriend taken from him by Negan just like he took Dwight’s wife, Sherry. Speaking of which, Negan seems to never waste an opportunity to rub his banging of Sherry in Dwight’s burned face. What a scumbag. We got a look at Negan’s collection of traumatized wives this time. He has a lot. Negan is so good at breaking people down. This week, although being impressed with Carl’s ballsy defiance, he did all he could to make Carl feel small and humiliated by making him expose his empty eye socket and singing “You Are My Sunshine”. This fascination he has with the boy has me wondering what his plans are. Carl did kill two of his men, and Negan has already proven he doesn’t allow his men to be killed without someone being punished. Surely some of the Saviors would want to get their hands on Carl. Can he really allow Carl to live after sharing so much information with him around the compound? Now that he has taken Carl back to Alexandria where they both wait for Rick to get back, he could kill Carl right in front of his dad or vice versa.. or both. 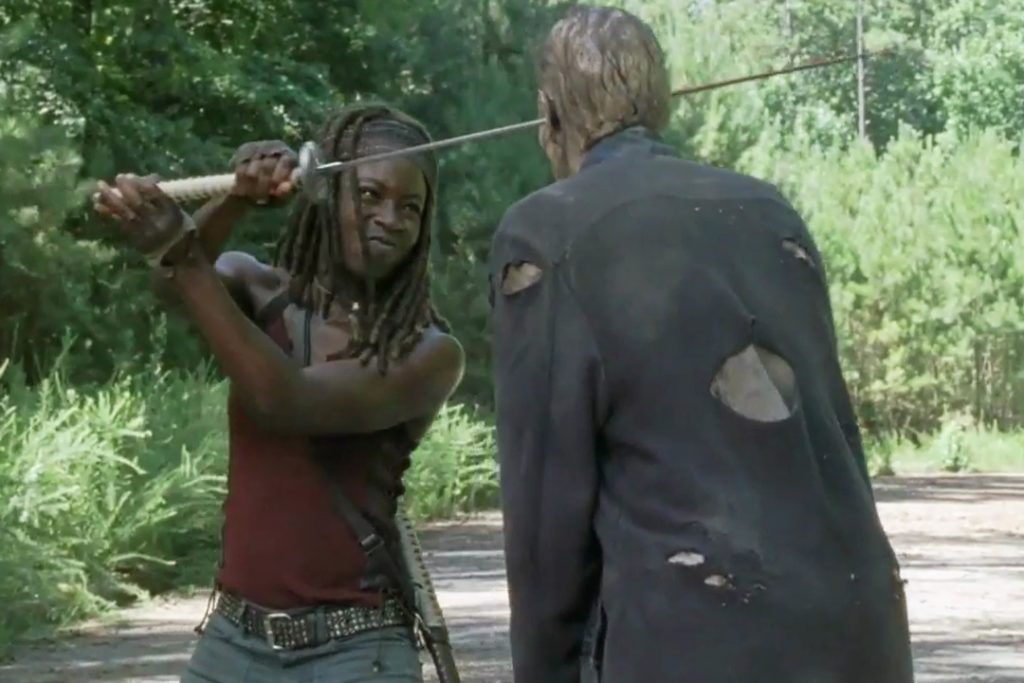 I really don’t want Carl to die. He showed us he has the ability to be even tougher than his dad. Though he did get rattled by having to entertain Negan, he bounced back when he warned the villain he was making a mistake keeping his biggest threats alive. Carl impressed me today, taking out two guys and standing up to Negan even when he was put in a corner. I just wish he had a better plan than just trying to assassinate Negan while being surrounded by dozens of his men. Perhaps he was hoping to rescue Daryl, who despite playing his role as a good little slave, spoke out of turn to show concern for Carl. I enjoyed seeing that because it means Daryl is not broken, which I never thought he was. Maybe Carl should have listened to Jesus’ plan instead of just jumping into the lion’s den head on. By the way, I was hoping to get more interaction between Carl and Jesus before they attempted to fight the Saviors, but oh, well.

Speaking of firey characters, Christian Serratos was able to up her acting game with her feisty Rosita character as she and Eugene headed to the factory where he said he could make bullets. I hate to say it, but Rosita, who has always been a tough fighter, has grown to be an even harder, better character with the death of Abraham. It makes me wonder if her motivation to kill Negan is based more off protecting her people or avenging Abraham. Either way, I love this stone cold determination she has. I’m incredibly happy the writers are allowing this character to grow, even if her actions eventually get her killed, which she willingly accepts that outcome should it come to that. Her exchanges with Eugene were harsh, but she was right to call him weak and pitiful… again. Eugene is a smart guy, but he can’t keep carrying on as a helpless sheep in this world they are living in. Although, you do have to admire him trying to be the voice of reason by trying to discourage Rosita from her intentions. Both Serratos and Josh McDermitt performed with excellence this week.

Surprisingly, this was another 90 minute episode (62 minutes without commercials). I’m okay if random episodes have longer lengths – much like many episodes of Sons of Anarchy that were often in the 70 minutes range – just so long as a lot is accomplished. I feel this episode had a better reason for the extended length than “Service”. At least it felt more fulfilling. It definitely felt like an hour long episode, but had more going for it. Even though my skin was crawling, I fully enjoyed Negan’s antics and not just with Carl. His taunting of Olivia was so gleefully sinister. Everything a perfect villain should be. It was great to see Jesus doing his ninja thing (I call it his “ninja thing”) again, sneaking around and strategizing. There was some really intense human drama in this episode, I hardly noticed the lack of zombie killing. Perhaps some stuff could have been cut out. One scene comes to mind and that would be a revisit with Sherry and Dwight smoking cigarettes on a stairwell. Perhaps some scenes could have been trimmed. I personally never mind drawn out conversations between Negan and anyone he’s tormenting. 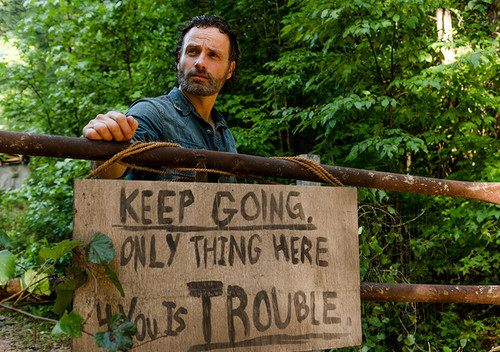 I think “Sing Me a Song” was a good setup for next week’s mid-finale. Between Negan chilling like a king in Alexandria with Carl and Judy by his side, waiting for Rick’s return, Spencer’s attitude towards Rick, and Rosita’s intentions, there really no telling what’s about to go down. Now that it’s been confirmed Jeffrey Dean Morgan has signed on to be in season eight, it’s clear his life won’t be cut short, but anyone else’s can be. I do expect good things from next week’s episode. I really hope to see more stories finally colliding with each other. And to be honest, I welcome this season’s hiatus because I need a break from this show. I hope it gets better in the second half, I really do. At least this episode picked up a little bit of the slack and allowed us to see some fine acting from the regular cast. Now, if we could just see every cast member appear next week, that would be great. 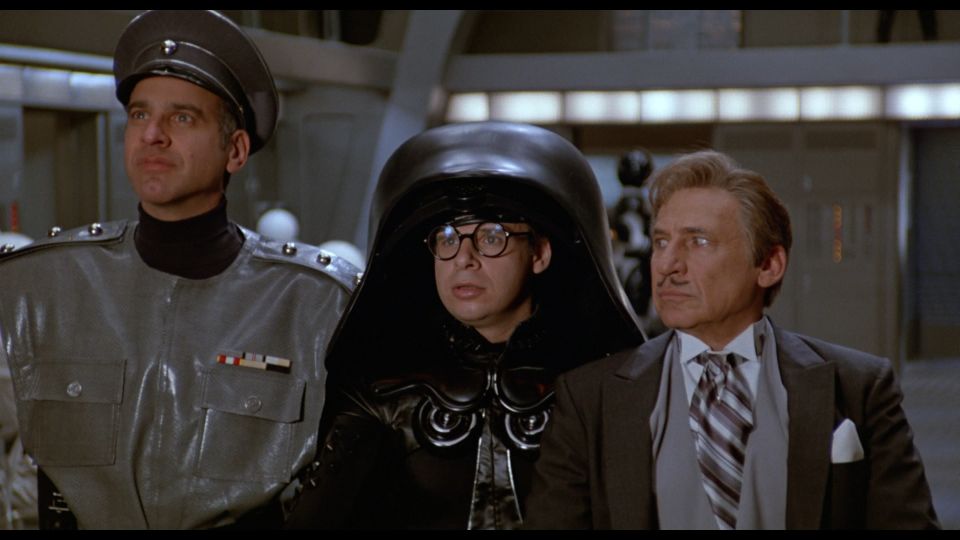