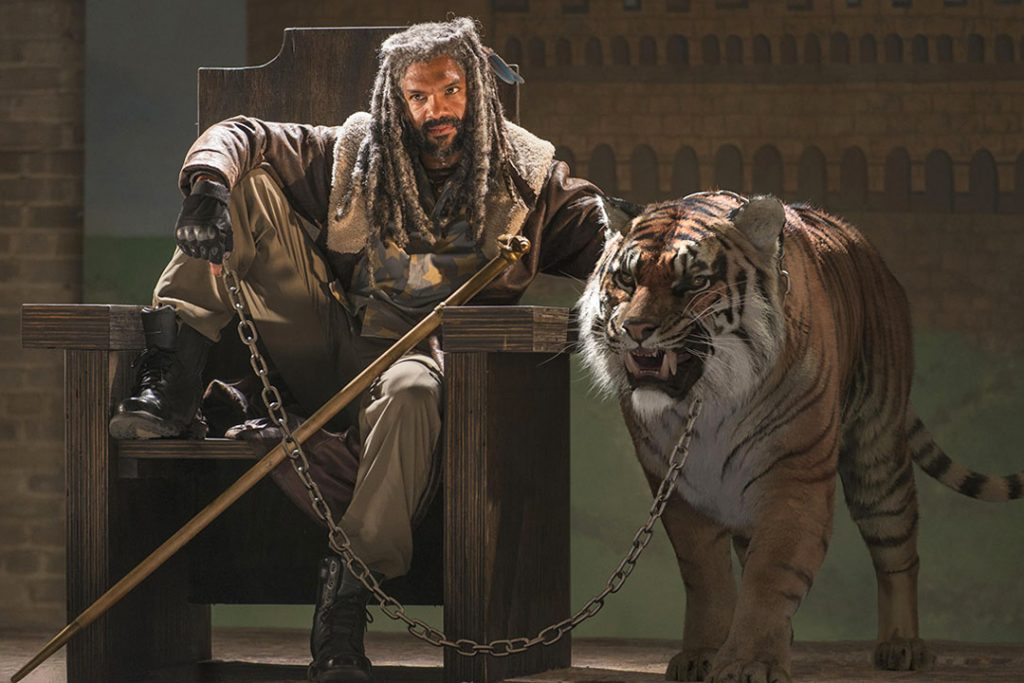 The Walking Dead: ‘The Well’ Review

Welcome to The Kingdom.

SPOILERS will more than likely pop up here and there… just so ya know. I mean, you should already know.

“The Well” probably wasn’t the episode we wanted, but it’s the one we may have needed. After getting our hearts pulled out of our chests and stomped on, as well as our emotions pissed on last week in the season premiere, the seventh season’s second episode gave our nerves a break with this less than eventful, but calm and quite humorous follow up.

As much as I would have liked to see the progression of Negan’s reign, we kind of had to touch bases with Morgan and Carol. I mean, Carol was on the threshold of death after he run in with The Saviors last season, now wasn’t she? Well, thankfully she’s alive and well, trying to process her new surroundings in a colonized place called The Kingdom. Their leader is a rather colorful character by the name of King Ezekiel (Khary Payton). Ezekiel talks and acts like he’s in a medieval time period. He has a pet tiger named Shiva. Yeah, he’s a fun addition to the show. His introduction was great, but Carol’s reaction was priceless. Of course, we come to find out Ezekiel is pulling off an elaborate act in order to give his people hope. His heart-to-heart with Carol as he comes clean on his persona was a highlight of the episode. Ezekiel’s backstory was really engaging and the delivery was perfect. It seems as if he is a relatively good man, out to do right by his people. However, he may have some tricks up his sleeves. He’s cooperated with the Saviors by giving them food, but his dirty, little secret is he’s giving them tainted hog meat. That makes him smart, and a little devious. So I’m already intrigued by this guy. By the way, Jerry, Ezekiel’s manservant is pretty damn funny.

Carol and Morgan were mostly separate, but it was nice to see them not at odds with each other when they were together. It’s pretty fascinating to see Carol having to acting like a proper domesticated lady in order to sneak around, taking things she wanted. What makes this fascinating was Carol was a domesticated housewife at the beginning of the show. We know her now as a hardened killer. So to see have to act like the former version of herself is quite interesting. Her decision to accept Ezekiel’s go/stay proposition has me wondering if she’ll return to Alexandria anytime soon, and what her motives are.

Morgan’s seems more at ease in the Kingdom. It has me wondering if he’ll ever return to Alexandria. I’d imagine so, eventually. He was given a new protégé. Ezekiel recognizes that Morgan is quite skilled with his staff, so he asked him to train a young man (Forgot his name, sorry). Morgan’s connection with the young man seems to be a good fit. Where it’s going to go, I don’t know, but I feel as if it’s going to be tragic. Despite Morgan getting cozy in his new surroundings, it was interesting to see even he thought something was a bit off about The Kingdom. So maybe his stay won’t be too long.

Honestly, I don’t have a whole lot to say about this episode. It was a smooth watch with some tension brought to us by members of the Saviors. It was kind of a nice change of pace, this episode. The Kingdom is kind of this hippy like town, where things are mostly in control. Hey, they have fruit cobbler with every meal. Ezekiel seems to have a handle on everything, including his dealings with The Saviors, but it will be interesting to see if and how they join in the fight against Negan. Overall, this was a fine, surpirsingly offbeat episode, but nothing seemed to moved forward really. I do hope this will be the only episode that is solely dedicated on this setting.

By the way, I guess congratulations are in order for Alanna Masterson and Christian Serratos for being promoted to having their names in the opening credits. Too bad two characters had to die, dammit… No, but for real, very happy for them.