Netflix has been a dominant force in the last three Sundances. This week’s fest included the premiere of A Futile and Stupid Gesture, the story of National Lampoon founder Doug Kenney (Will Forte). Since National Lampoon launched so many A-list talents, a lot of famous actors play famous comedians.

Joel McHale plays Chevy Chase. Emmy Rossum plays Kathryn Walker, Kenney’s girlfriend at the time of his death. McHale is also at Sundance with Assassination Nation, a midnight movie with relevant to the current #MeToo and Time’s Up movements. You can bring Sundance home with you when A Futile and Stupid Gesture premieres Friday on Netflix.

WLE: Is Chevy Chase’s vocal pattern that he says everything under his breath?

Joel McHale: No. I mean, he did scream, “Live from New York, it’s Saturday Night.” No, I think he obviously had a very large range for how he delivered comedy. In the movie, am I muttering?

WLE: You captured what I remember from Fletch and Vacation movies.

WLE: That’s why I thought the speech pattern, being so different from yours, was his essence but not an impression.

Joel McHale: Right on, thank you. I did go over every line to make sure nothing came out sounding like me, because then that would be bad. Thank you, I studied young Chevy Chase tapes endlessly. I found a pair of his pants from 1973 and I’m wearing them now underneath my jeans.

WLE: Were Kathryn’s movies helpful to you or something you wanted to avoid? 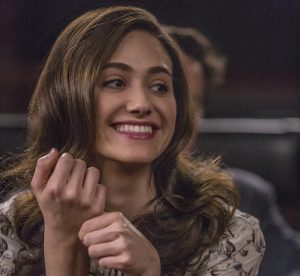 Emmy Rossum: I think I had a little bit more leeway. She’s not as recognizable as Chevy or Belushi so I had a little bit more leeway. I did listen to an audiobook that she did which I thought might be closer to what she would sound like not in character. I know things about her upbringing. She’s a Fulbright Scholar and so she’s somebody that would speak properly. I tried to do that.

Joel McHale: Do you know what she looks like today? Are there any photos of her?

Joel McHale: How does she look?

WLE: Doug doesn’t even really take his downfall seriously. Is Kathryn the one grounding that?

Emmy Rossum: Yeah. She’s a more serious actress, although she did comedy as well, and I think she’s a more serious person, compassionate, empathetic. I think she was clearly very in love with him. I think he was the kind of man that was full of light and life and burned as bright as he did dark. I think those people are very magnetic. It’s very easy to fall in love and want to be in that person’s orbit and then to watch them struggle so much with the darkness that is where they get a lot of their inspiration from as well is a difficult journey and something that I’ve had in relationships with creative people that I’ve had in past relationships, people that struggled with mental health and were incredibly creative. That was definitely something I could identify with as well.

WLE: You’re married to a creative now. Is Sam Esmail more of a stable one?

Emmy Rossum: Oh, he’s nothing like Doug Kenney. My husband’s perfect. He doesn’t struggle like that. That’s why I married him.

WLE: Doing a Chevy Chase pratfall at Doug’s house, was the slapstick natural to you?

Joel McHale: I studied when Chevy would do that. He is not just falling over for no reason. If you watch his pratfalls, he is trying to accomplish a task. Obviously, what he does is he’s accomplishing it very badly on purpose so everything goes everywhere but he’s still trying to pour coffee or something, or put the lid back on the mustard. Whatever it is, he’s still trying to do that, just knocking everything else over and falling over. So that’s what I tried to capture.

Emmy Rossum: It’s that kind of absurdist comedy that David does so well, which Is I think why he’s the perfect persona to have directed this film.

WLE: It’s still a David Wain movie, even though it’s a biography.

Joel McHale: Yeah, he knew his shit. For all these comedians and big personalities that were walking around, especially Domhnall [Gleeson].

Joel McHale: But it’s funny because he nails the comedy. That’s how good of an actor he is. He just kind of watches it. With all these big personalities walking around, obviously Domhnall’s in the biggest movie, but David has wrangled us all really well.

WLE: What must it have been like doing actual Caddyshack scenes on the golf course?

Joel McHale: I was terrified because of all the things. At least, I know as a child, I watched it a million times and I know many people have seen that movie. If you fuck that up, then it is really going to take people out.

Joel McHale: It would be terrible.

Joel McHale: I was sitting there on my phone on the thing going, “Okay, he took two steps here.” I made sure, I was like, “He doesn’t have shoes on.” I was like I’m going to make sure, that was from the don’t fuck up school of acting which I have just opened.

WLE: What did National Lampoon mean to each of you, Joel as someone in comedy, and Emmy?

Joel McHale: She’s a young person. She was born years after

Emmy Rossum: Nothing. I mean, not nothing but I knew of it in the kind of way that if you were raised by a feminist single mother, you knew of it as that boys’ magazine. I didn’t realize that it was really topical, that Doug Kenney was paving the way. It’s kind of like an origin story of American comedy.

Joel McHale: I didn’t know about Doug Kenney until I heard about the book which the movie’s named after. I compared to what he did, he started National Lampoon and then he did Animal House and then the Yearbook and then Caddyshack and then died. This guy had a huge influence on my life without even knowing. It’s like Monty Pyhon, Richard Pryor or even the music of the ‘70s like the Carpenters. That was just a soundtrack and this was part of my life. It influenced me in the way, like this is how people are funny. Every character practically in the movie, I know Larraine Newman, I know Gilda Radner, I know all these people. When you see characters like Emmy’s or Tom Lennon’s, the guys and the women that were not as well known, it’s fascinating because it’s part of this world that until now really has never been illuminated.

WLE: I saw Assassination Nation and you must have shot that before the #MeToo movement started happening. As it grew late last year and you knew you had this movie coming out, did it seem prescient?

Joel McHale: This movie is no some sort of contradiction of the #MeToo movement.

WLE: Not at all, it’s a rallying cry now.

Joel McHale: I would say yes, now it is very timely for what’s happened, for the movement. As you know, the movie is about a small town where everyone’s internet data is all dumped. That monologue at the end by Odessa really is powerful as to what young women have to go through and the pressures that are put upon them, and how they are not going to take it. These four high school girls, the entire town is trying to kill them and they fight back. It’s great.

WLE: I saw your interview with TMZ and I understand they approached you on the street.

Joel McHale: No, no, no, I invited them into my home. It was high tea. We had high tea.

Emmy Rossum: Did you do scones and clotted cream?

Joel McHale: Yes, which is one of my favorites but it always ruins my dinner. I really have to pace myself on that sort of thing.

WLE: You’re not the first to have said Aziz Ansari’s situation sounds like a bad date but I don’t think I’ve heard anyone acknowledge that it was a first date. Did it seem like his behavior might have been too aggressive for someone he just met?

Emmy Rossum: I just want to jump in and protect you a little bit. For those of us who were not in that room, I don’t think that we can speak to what happened. I just want to say that I know Joel to be a very kind man that supports women and I don’t want him to feel put on the spot and trapped by any kind of question.

WLE: I know you support the #MeToo movement.

WLE: To me fingers down the throat doesn’t sound like a bad date.

Emmy Rossum: No, no, this is inappropriate. This line of questioning is making me very uncomfortable. 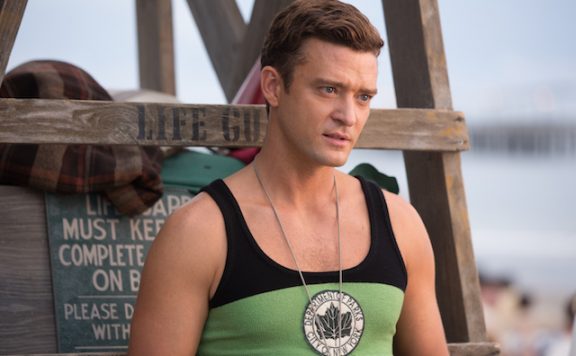