I understand if you didn’t like Gareth Edwards’ 2014 Godzilla. It was a choice to obscure the monsters and if that’s who you came to see, you’d be disappointed. Godzilla: King of the Monsters is definitely more in the Kong: Skull Island mold, so maybe you’ll like that more but not me.

Honestly, what is even happening in this shot?

Godzilla: King of the Monsters may have more monster battles on screen but they do everything they possibly can to make sure you still can’t see them. They’re dark, shaky and obscured by elements like rain and snow. Even when fun money shots happen, the action is on the bottom righthand corner of the frame. God forbid you have to see this in 3D where it’s even darker.

No matter what the location, they find a way to make it ugly and incomprehensible. In Antarctica it’s all gray and snowing. Or they’re underwater and you can’t see (Hello, this is the studio that made Aquaman which was a bright and vibrant waterscape.) Even in Mexico with a volcano erupting it’s all dark, burnt and shaky. A climax includes lava and radiation in a flaming hellscape like a heavy metal album cover without the composition. It’s no Volcano, I’ll tell you that. 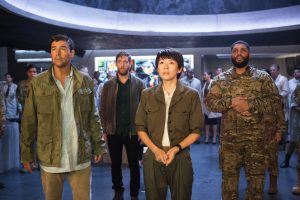 They also keep cutting to the humans. If we’re basically all agreeing to watch animated movies at this point (because that’s what the monster scenes are), why bother having live-action elements anymore. It never looks like the actors are in the same place as the monsters.

If your complaint with Edwards was that Godzilla wasn’t in the movie enough, he’s still hardly in this. There are 17 monsters in King of the Monsters so Godzilla is a supporting character in his own movie. Don’t get too excited, you don’t see all 17 fight each other. It’s only the main four who fight each other. 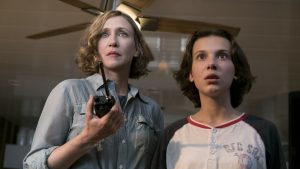 There are also 17 human characters too. None of them get enough to latch onto. Gone are the days of epic ensemble movies like The Poseidon Adventure or Towering Inferno where everyone is a memorable character. Or hell, even Independence Day. 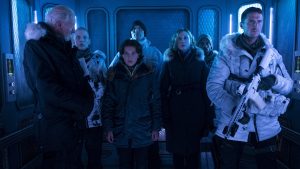 There’s still a lot of science and military people talking in between the monster fights, just like a Toho Godzilla movie. Of course, Charles Dance is the best at it, and Kyle Chandler is committed to the drama of it. The movie stops dead for one liners that aren’t funny. “It’s going to be a bad day for Red Sox fans” when there’s destruction of Boston landmarks. We get it, you know sports.

Godzilla: King of the Monsters is now the worst American Godzilla movie. Say what you will about Roland Emmerich’s, but at least he showed Godzilla a lot.