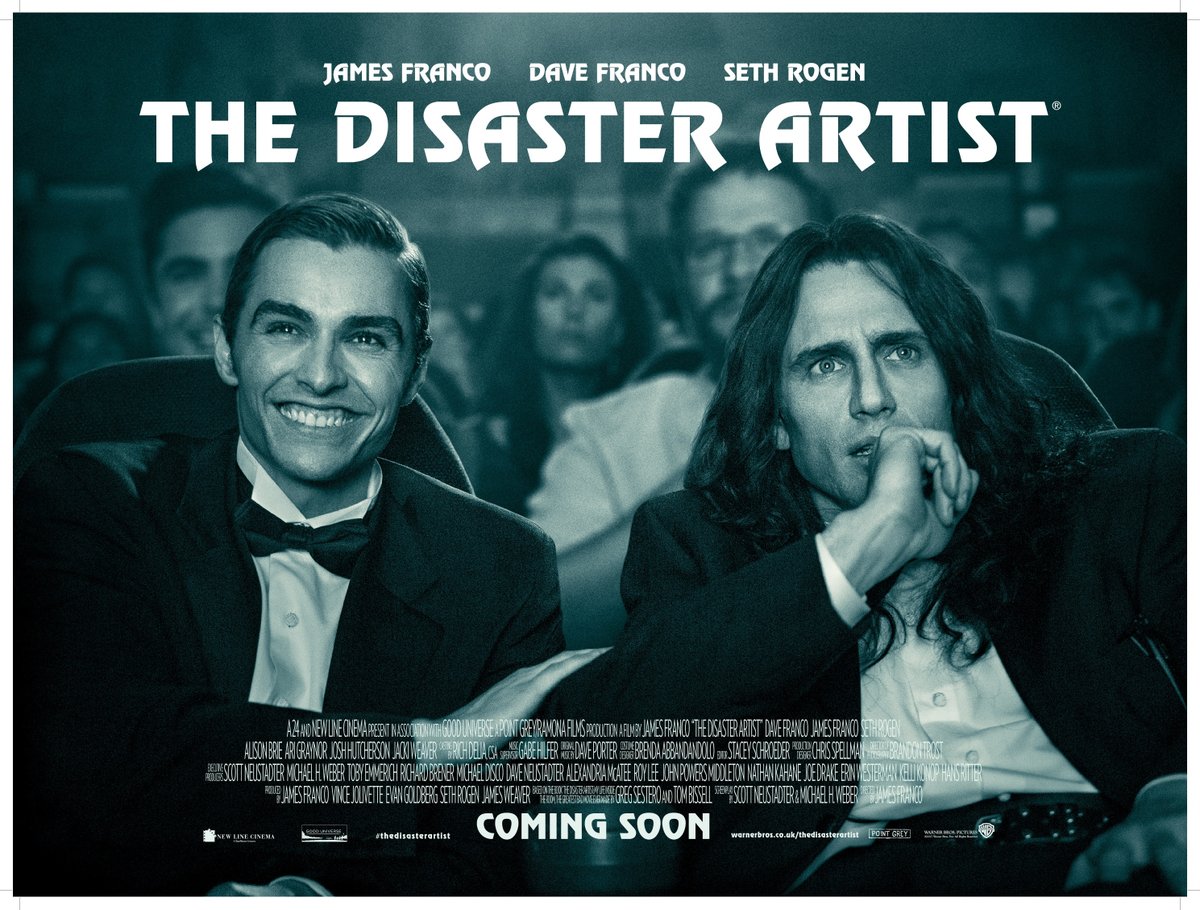 Disaster Artist: The Gradebook is the ratings of newly released films by the contributors and fans of  We Live Entertainment. If you are interested in participating, join the We Live Entertainment Fan Chat Page on Facebook and look for the weekly posts of new releases.

This is, without a doubt, one of the best movies of the year! I was excited for this movie, but I didn’t think I was going to love it THIS much. James Franco beautifully captures the mannerisms of Tommy Wiseau but what makes his portrayal so great is that he treats Tommy more as a human being rather than a joke. The dynamic between Greg Sestero (played wonderfully by Dave Franco) and Tommy Wiseau is the strongest aspect of this film. The Room is one of my biggest guilty pleasures of all-time, so it was really interesting to take a behind-the-scenes look at the filmmaking. The Disaster Artist is funny, strangely inspiring, and moving (at times) — you don’t have to be a fan of “The Room” to appreciate this movie which is what makes this movie even better.

James Franco does an amazing job playing Tommy Wiseau in “The Disaster Artist,” a hilarious and heartfelt film about the struggles of making it in the entertainment industry. Fans of “The Room” will love the recreations on display here and others should find plenty to enjoy too. The film isn’t on the same level as “Ed Wood” when it comes to these types of films, but it’s still an entertaining and fascinating adaptation of an incredible book.

Hilarious, endlessly entertaining and surprisingly very endearing. The Disaster Artist is a fantastic look at the friendship between a man and his very eccentric friend and how they made one of the worst movies of all time. However, it’s also a fantastic look at the Hollywood industry in general and how dedicated someone like Wiseau could be. The film is also dominated by a career-best performance by James Franco who gives an incredibly transformative, accurate and surprisingly heartwarming performance as Tommy Wiseau. This performance not only got me to laugh at Wiseau but also got me to care a lot more about him then I expected. However, because the film is so focused on the friendship the other character don’t really get a ton to do, and one relationship is pretty rushed however it’s really just a minor flaw. This is easily the Ed Wood of our generation that got me to look at what might be my personal favorite guilty pleasure in a whole new light and really shows how far Franco and Company have in fact come. This definitely has Oscar potential for sure, and I still can’t believe I’m actually saying that for a movie like this.

I had a feeling I would love this, but I didn’t think I’d love it THIS much, “The Disaster Artist” is absolutely amazing. All the cast is great here, but it’s the two leads James and Dave Franco that are easily some of the best performances I’ve seen all year, these two get completely lost as Tommy and Greg and seriously deserve Oscar attention. This film is consistently hilarious but it’s also very poignant too, I wasn’t expecting this film to make me cry, but it did. This film makes you really feel for Tommy, even though many (including me) consider “The Room” to be the best so bad it’s good film of all-time, the man was very serious about the film and I loved how instead of them making a film mocking Tommy for his weirdness, this is a celebration of Tommy. Overall “The Disaster Artist” is so inspiring, absolutely adored it.

I knew I was gonna love this movie which is based on what is considered to be the best worst film ever made. But I did not expect to love it THIS MUCH. I freakin’ adored this film to no end, and it has beaten Lego Batman as my favorite comedy of 2017. This film had me dying of laughter in the theaters. I was laughing and roaring so much. Not only is this film goddamn hilarious but it’s also surprisingly heartwarming, touching and inspirational which I didn’t expect. Honestly, it really touched me in many ways. This film doesn’t just make fun of Tommy for his weirdness, but it’s an inspiration for people like myself who want to make it in the film industry. James Franco is Oscar-worthy in this film as Tommy Wiseau. He disappears into the character to the point where I saw Tommy, not the actor. He captures the essence of the mysterious Tommy Wiseau. I hope he gets nominated for Best Actor. Dave Franco also did a fantastic job playing Tommy’s best friend Greg, and they have instant and wonderful chemistry from the beginning. All the other actors such as Seth Rogen, Josh Hutcherson, Zac Efron, Allison Brie and everyone else are also great and have some great moments. This film actually made me tear up which is something I also didn’t expect this film to do. It is inspirational, amazing, phenomenal and outstanding in every way. I can’t believe how much I adored this film. I adore it, even more, the more I think about it. This film will definitely be high up on my best of 2017 list, and this film is actually inspiring me to write an actual script and learn more about screenwriting which is also something I give this film major props for doing.