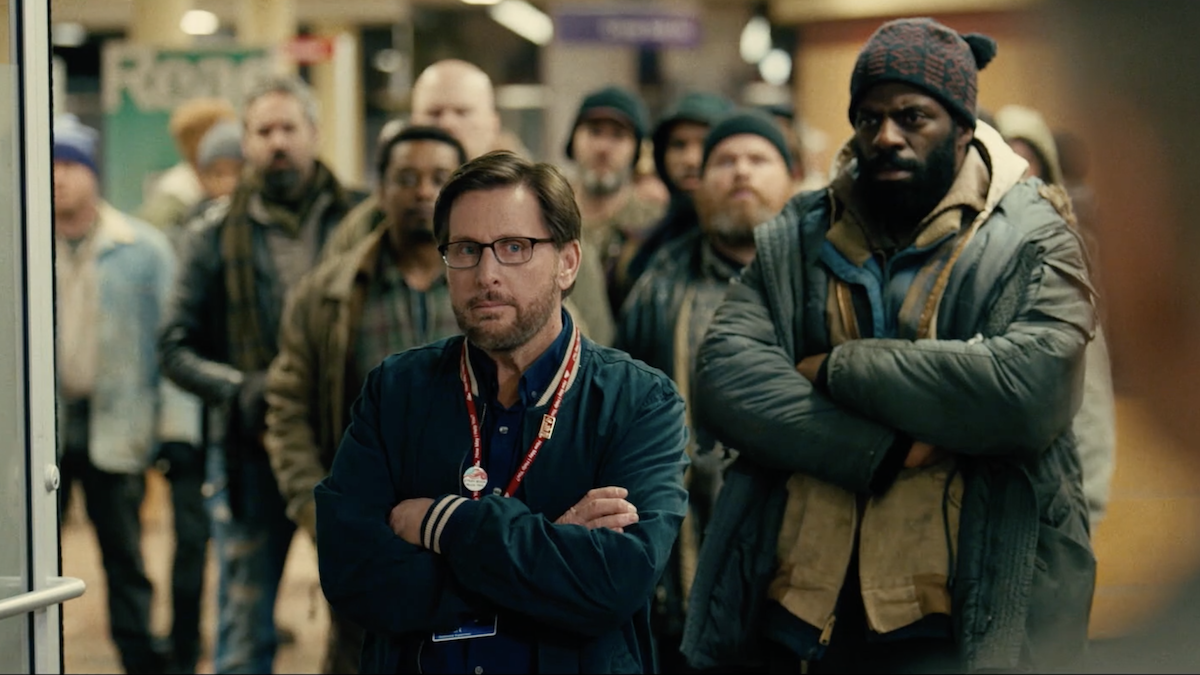 The Public Review: Emilio Estevez sticks it to the man.

One of the most underrated and overlooked films to come out of the 2018 Toronto International Film Festival was Emilio Estevez’s The Public. Stuart Goodson (Estevez) works as the head librarian at the Cincinnati Public Library in downtown Cincinnati. During the day, he spends most of the time looking after several homeless men who visit the library on what seems like a regular basis. Each one of these men has a different reason for coming to the library; some use it to look for work while others use it merely as a way to get off the street for the day.

As the evening temperatures begin to drop, the lack of homeless shelters becomes a serious concern for the 70 plus homeless men who visit the library regularly. It is clear that they don’t have anywhere to go yet no one including the local officials seems to care. After learning about the deaths of several homeless men caused by the freezing temperatures, Jackson decides that he must stand up for his rights. He refuses to leave the library and encourages the rest of the homeless men to join him. Seeing Jackson take a stand to fight for what is right is a pretty powerful statement and one that only becomes stronger as the film draws to a close.

Emilio Estevez has created something extraordinary with The Public. This brave and powerful film is a look at how those in power have turned a blind eye on the homeless epidemic here in the United States. Estevez’s hard-hitting and eye-opening film takes us on a journey with a group of homeless men who live on the streets of Cincinnati and decide to take action. The Public is sure to spark a conversation as it showcases the importance of public libraries especially to those who are less fortunate. The public library nowadays is often viewed as an ancient relic, but it is important never to forget what it stands for. This government-funded institution serves as one of the last remaining public spaces where everyone is welcome, and anyone can educate themselves by using the provided resources. Estevez shows how the homeless use the library as a way to better their lives whether it’s to read books, apply for jobs, or simply stay warm.

We often forget that there are thousands of people throughout the United States that don’t have a roof over their head or a proper education that prohibits them from getting a job. We as Americans take a lot for granted and forget that so many people are struggling to find food to eat or blankets to stay warm. We have become so used to our luxurious lives full of technology that we tend to forget that there are a lot of people who don’t even have a bed to sleep in. The public library for thousands, if not, millions of men, women, and children serves as a valuable resource where they aren’t judged but welcomed with open arms.

The Public tackles various human rights issues through the personal perspectives of the characters in the film. In the beginning, we are introduced to Stuart, Myra (Malone) and the rest of the library staff. We learn about their personalities, their roles at the library, and their backstories. We learn that the library holds a special place in Stuart’s heart when he tells Angela how books saved his life and helped him overcome his addictions. We get to know these librarians and see how much they handle on a daily basis. We see through their eyes how a library is a place where people come to better themselves in so many ways.

About 20 minutes into the film, the story begins to switch gears as it is revealed that the library is being sued for discrimination by one of the homeless men who was asked to leave due to his body odor. This is rather upsetting news for Josh Davis, a public prosecutor that is hoping to become the city’s mayor. However, Josh doesn’t want to address this issue nor the issue of the lack of shelters for the homeless despite the brutal winter weather which has already taken the lives of several homeless men.

Emilio Estevez did such a fantastic job with this film. Not only is the direction solid but the script is on point. It also needs to be said that the pacing is perfect. You never feel like the film overstays it’s welcome or that any scene goes on too long or is too short. As for Estevez’s performance, I dug it. Stuart was a character that was very easy to get behind and champion. I loved that as the film goes on, we get to learn more and more about his past through various situations where he is forced to react to Jackson’s requests or those in power.

Throughout the film, Estevez surrounds himself with a terrific supporting cast. I loved Jena Malone as Myra, the smart-ass hipster who wasn’t afraid to speak her mind. Taylor Schilling plays Angela, Stuart’s building manager/girlfriend who serves as more than a love interest as she plays a huge role in how this story plays out. Gabrielle Union plays a news reporter that only cares about what’s going to boost her career rather than reporting the facts. This type of persona is a big problem in journalism nowadays. Alec Baldwin plays a crisis negotiator assigned to oversee the library. His character has a subplot about his son that goes missing, but I don’t want to spoil anything so I’ll stop there. Honestly, the entire supporting cast was great, and each character had a meaty role that added something to the story.

One of my favorite scenes in this film was the scene where the mayor-elect was forced to go outside and lay on the ground for 5 minutes. Seeing an elected official lay on the ground was a powerful image and one that spoke volumes. The Public has a lot to say, and there are plenty of hard-hitting messages to take away from it including standing up for your rights by making a statement without violence. It is a film that reminds audiences to treat people with kindness and to help those who are less fortunate. Estevez does this in a way that isn’t preachy but instead comes across as entertaining yet poignant.

The Public talks about essential issues in a way that never comes across as too heavy or serious. It highlights the importance of standing up for your rights while proving the old saying that actions speak louder than words. The Public is a feel-good crowd-pleaser about the power of social justice. Highly recommended

Scott ‘Movie Man’ Menzel’s raring for The Public is an 8 out of 10. 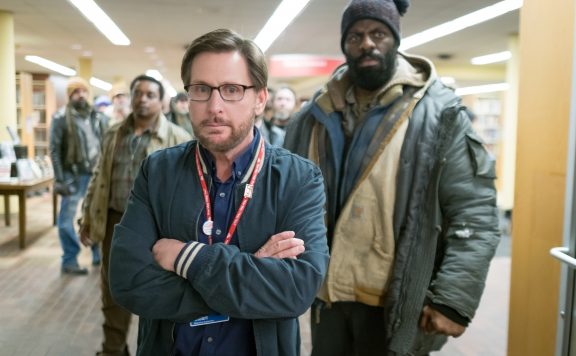