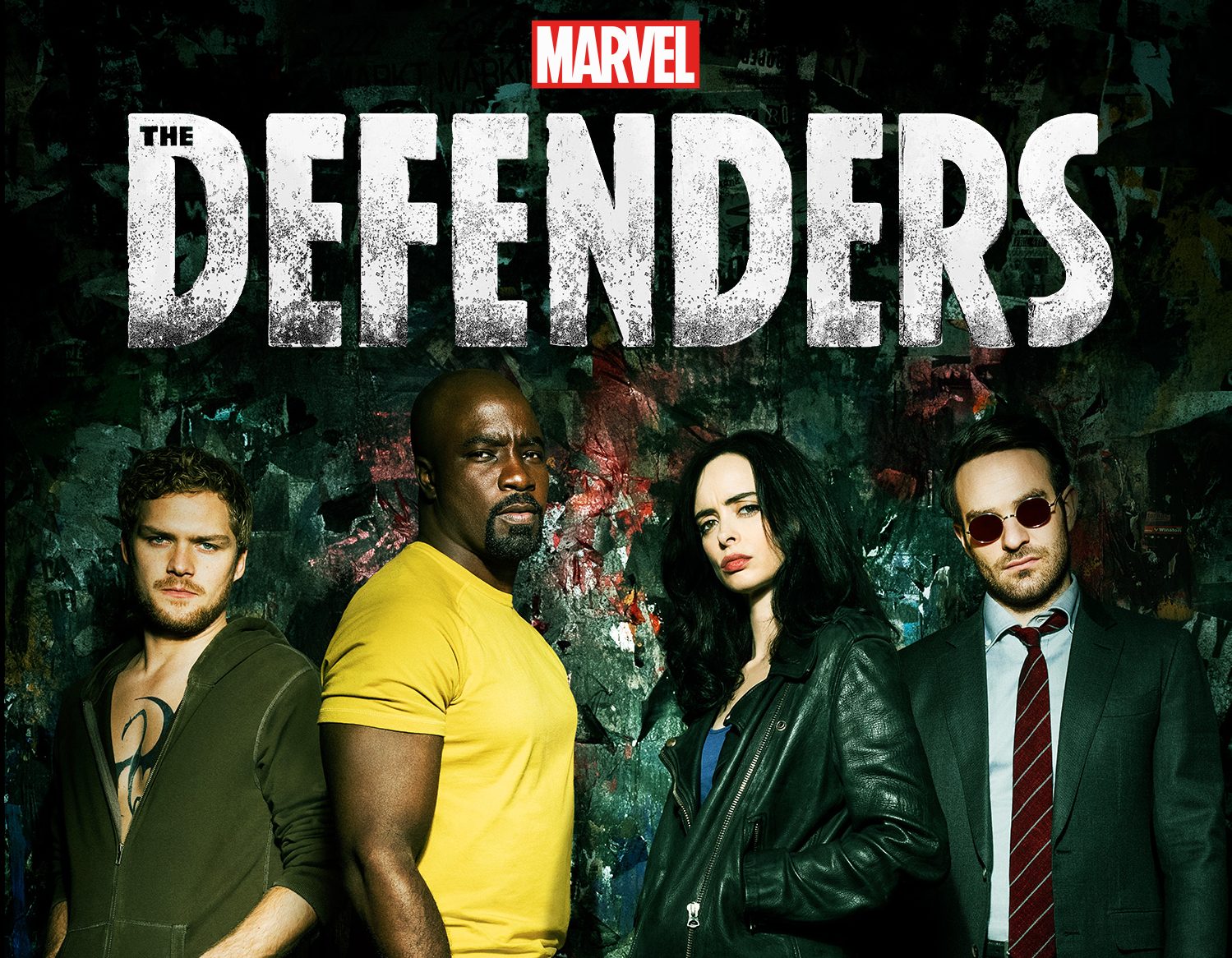 The Avengers of Netflix are Here! Review: Season 1 of Marvel’s ‘The Defenders’ on Netflix

Now for years, I’ve been a fanboy of Marvel, everything from the comics, movies, and even Marvel working with Disney. I love Marvel, and Marvel can do no wrong unless your name is Iron Fist. Iron Fist was the last Netflix original series, and some people thought the show wasn’t that good, I personally didn’t hate it. In my opinion, it was just a bland “white yogurt” of a series.

I have enjoyed most of these original Netflix Marvel series that all take place in the MCU (Marvel Cinematic Universe), I especially love Daredevil and Luke Cage. When Marvel decided to work with Netflix, all my nerd juices boiled up in my body and unleashed a good ol’ fashion geekgasm. It was such a great idea, because it takes place in the MCU, brings new traffic to Netflix, sets a new tone for this universe, and it’s an opportunity for our smaller scale superheroes to shine and all eventually come together as one big superhero team up. 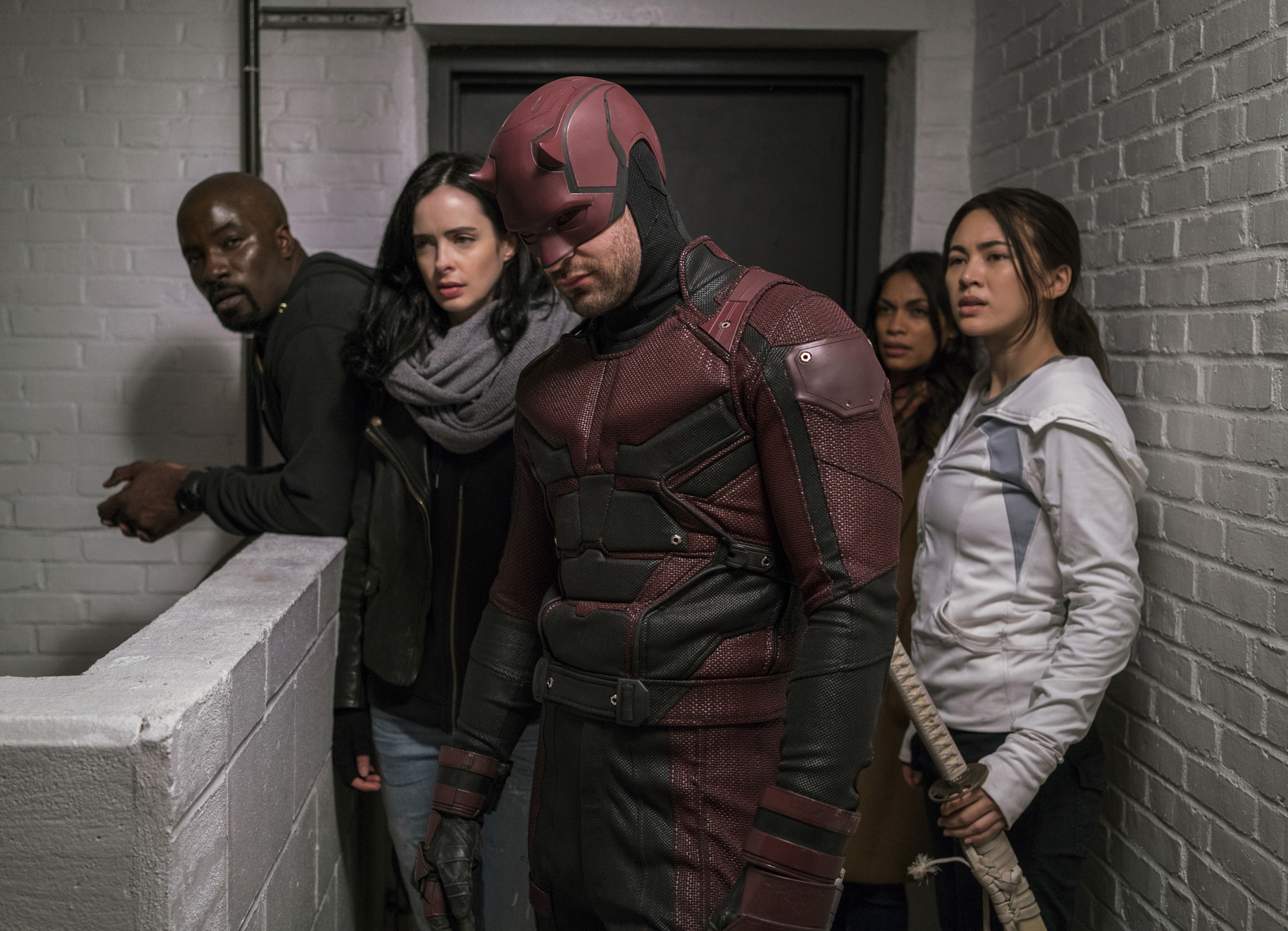 These Netflix shows (Jessica Jones, Daredevil, Luke Cage, and Iron Fist) have all led to The Defenders. Like its big screen blockbuster counterpart The Avengers, The Defenders brings us our Netflix heroes, establishes them, and brings them together. Even though these characters can’t get along, they have to put their differences aside and help the community.

Now if you’re reading this review, I’m sure you already know a little something about these heroes. A quick synopsis for The Defenders is our four heroes, Matt Murdock a.k.a Daredevil, Jessica Jones, Luke Cage and Danny Rand a.k.a Iron Fist, realize that they likely won’t be able to accomplish their goals of beating the villainous group known as The Hand working solo. That realization leads them to form The Defenders, stop The Hand, and save the Big Apple. 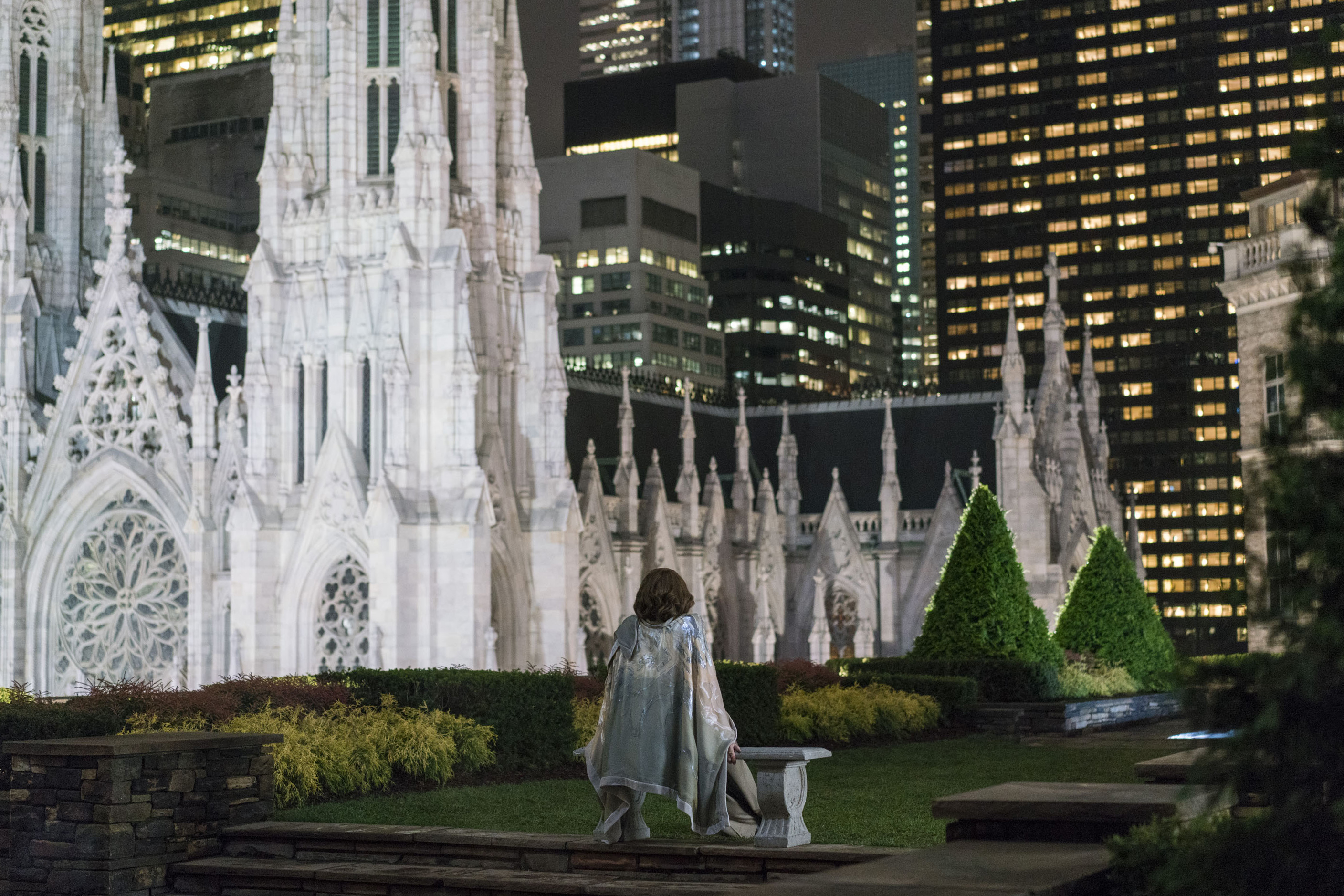 My favorite part of this would be the interacting and coming together of all these characters. The show starts out with these heroes all doing their own separate thing. Everything they are doing relates to every single one of them. I really enjoyed how the show brought everyone together. These characters are emotionally damaged and are not used to the idea of working with new people, even though they could all benefit from working with one another. This is how I enjoy seeing superhero teams come together. I really dislike when a writer or director just shoves all the characters, and they are randomly all friends. If anything, that is a really significant theme throughout the series. That even though we come from different backgrounds, and walks of life, we have the opportunity to come together as one. They even have Luke Cage talk with Iron Fist about social issues, money, politics, white privilege, law enforcement, economics, and race. Luke Cage talks about how Iron Fist has privilege, and how he is a millionaire, and how they are completely different based on our society. It’s not a heavy focal point on the episode, but they do bring it up as one of the themes. It’s a powerful scene, that has a message for the viewers. It really shows how these heroes are being humanized on screen, the only difference is they kick a little more ass and fight crime more than you and I are currently doing.

Every character is unique and carries a lot of charisma. The problem that I had with Iron Fist season one is that we really didn’t get enough time with Iron Fist. We got more time on the company, and Iron Fist felt secondary. Iron Fist in The Defenders has more development, and his goal of taking down The Hand is clearer. The Hand does not really come off as all that cold-hearted as the series is making them out to be. 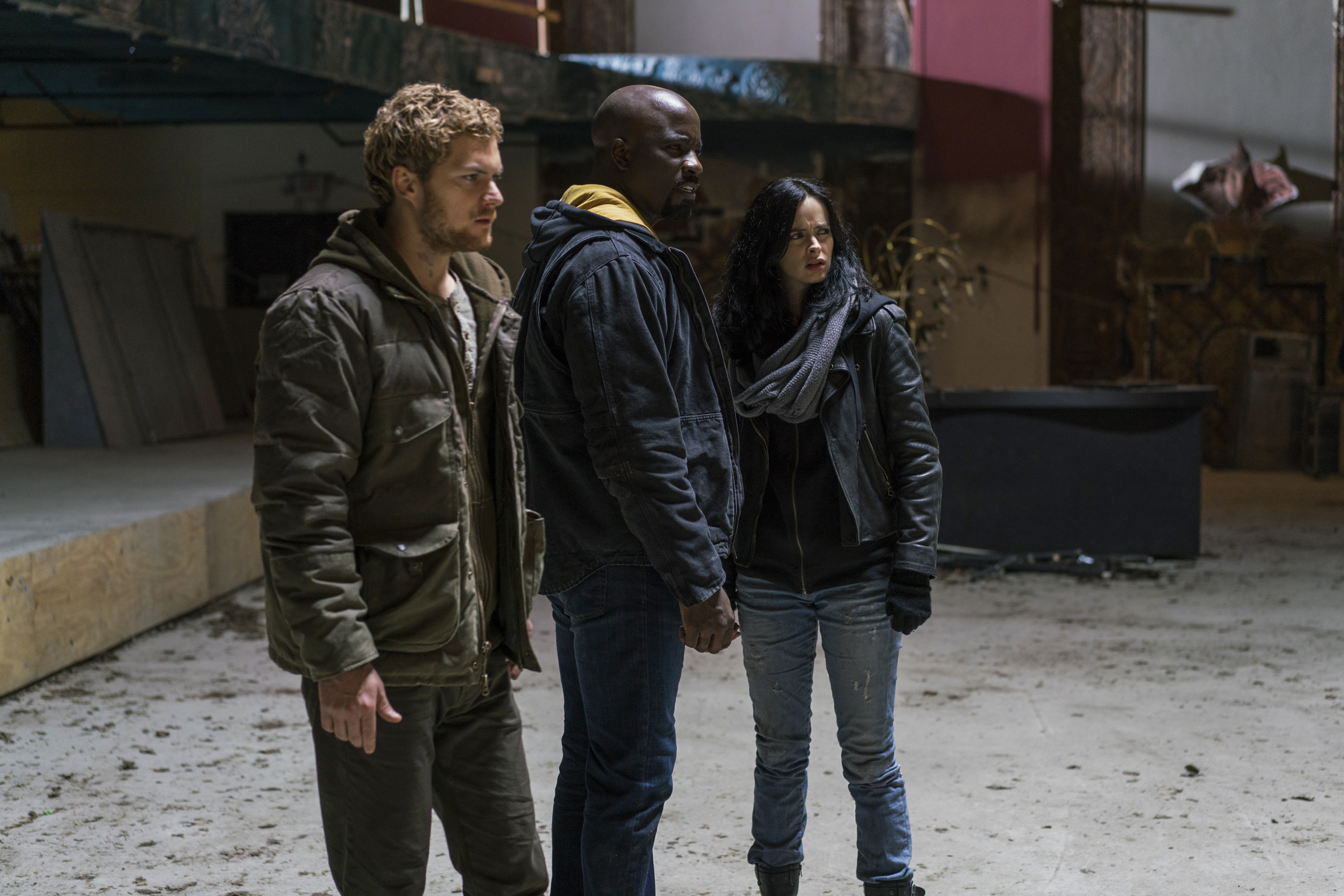 Speaking of The Hand, we’ve been hearing about this ninja organization since Daredevil. In The Defenders, we finally get to see the five fingers of The Hand, and the people who run this organization. Sigourney Weaver (Aliens, Avatar) is the H.B.I.C. of this organization, and her performance and character development are a breath of fresh air. We’ve all seen and or heard about how Marvel has lackluster villains. Lately, Marvel villains have been on a role getting so much better, and Weaver continues that role. At times she is wicked, violent, you understand her motive, and doesn’t come off as the usual bland villains we’ve seen.

The setting and tone of this show are more of a balance between Jessica Jones and Daredevil. Throughout the series, it felt more like the Jessica Jones and Daredevil shows, with friends. This is okay, but sometimes the tone of the shows makes this show feel just a tad uneven in some episodes. For instance, Iron Fist makes a couple of jokes, yet the lighting is lit like a dark, depressing episode of Daredevil.

I love the shows use of color how each character has a dominant color in each of their scenes. For instance, Luke Cage’s color is yellow, so whenever he pops up on screen, you see a yellow light filter somewhere. I appreciate that little touch, and it just makes the shows overall scenery and editing, look more fun and interesting.

This is a very small nitpick, but I feel like Marvel has spoiled me. Daredevil, Jessica Jones, and Luke Cage all look like blockbuster movies when you watch their shows. I remember thinking how Iron Fist looked like a cheap CW network television show, and The Defenders looks like a generic TV show. I just expect Marvel at this point to have everything look like an expensive big budget production. 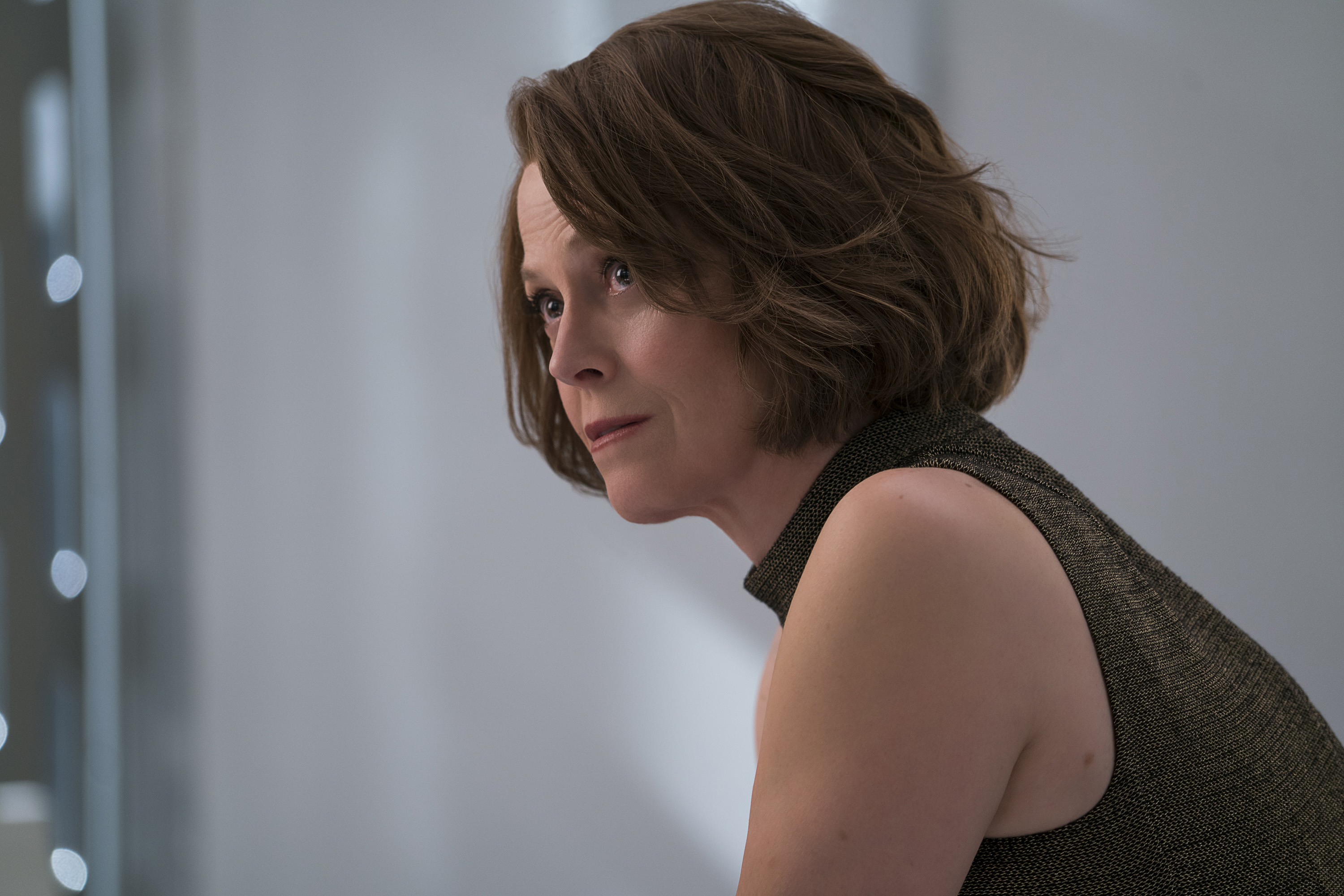 In addition, the fight scenes are brutal and balls to the wall beautiful! The action and fights are much better than the fight scenes from Iron Fist. In episode three, The Defenders have a hallway mosh pit of a fight. That hallway fight was my favorite because the choreography wasn’t that shaky camera nonsense, the transitions were smooth as ice, and you can clearly tell what is going on.

These Netflix shows are usually about 13 episodes, and at times that can feel a little long. Especially when you have episodes like Iron Fist that feel like filler, and you can skip. However, The Defenders is only eight episodes long, and most people really like that. I think maybe just one or two more episodes could have been used to explain a couple more subplots and incidents.

I do like the show, but it is not the big build up I was expecting. I really think Marvel has spoiled me, and I’m sure fans, including myself, expect something bigger from them. I’m sure fans were expecting this to be the big build up with heart and tension, much like The Avengers. The Avengers save the world, and The Defenders are sort of B – Level heroes when compared to The Avengers. If you are ever in the hood and your cat is stuck up in a tree, you can call Luke Cage and Jessica Jones to help you. You’ll have to wait until Luke Cage is done having sweet Christmas sex with Rosario Dawson, but you’ll get your cat back eventually little girl.

Overall, I’m one of the few people who would have liked a couple more episodes. That way The Hand comes off as a little more threatening, and some of the sub plots are discussed. Performances are well done, and the actors and actresses continue to impress. Netflix’s The Defenders works best when its central characters are bouncing dialogue off one another as everything is getting more and more hectic around them, and the way these characters interact with each other. It’s much better than Iron Fist, but still not as good, or offering anything new like Jessica Jones or Luke Cage. It’s still a fun show, can easily be binge watched, and most of my nerd juices were satisfied. I believe season one on Netflix of Marvel’s The Defenders earns…7 out of 10!