Stephen King and George A. Romero are two of the most beloved names in the horror entertainment community, so it was a treat when they came together to make the film ‘Creepshow’ in 1982. King served as the screenwriter while Romero directed it. The film is an anthology with five short stories while also being a love letter to the EC horror comics of the 1950s. ‘Creepshow’ was followed by two sequels (the third film had no involvement from King or Romero though) and is now the basis for a same-titled TV anthology.

Special makeup effects wizard Greg Nicotero — who worked a lot with the late Romero — is the showrunner of the new series. He’s brought in quite the team to work on the project, including some people who worked on the original film like Tom Savini and Adrienne Barbeau. The show also features the iconic Creep character, who sets the structure in place by flipping through Creepshow comics and those comics then turning into the segments for the episodes. Each episode is roughly 45 minutes in length and features two horror stories.

I’ll be shortly reviewing each segment of season one of ‘Creepshow’ separately since the stories are varied in plot and style. The first season premiered on September 26th and concluded its six-episode run on Halloween. The whole season is now available on Shudder. The streaming service has already renewed ‘Creepshow’ for a second season as well since it has attracted many viewers. 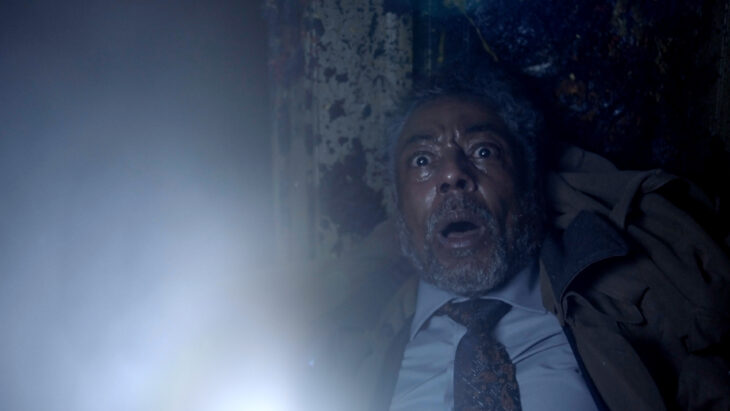 “Gray Matter,” based on Stephen King’s short story and directed by Greg Nicotero, kicks off the show. It involves a boy named Timmy (Christopher Nathan) telling a shopkeeper named Dixie (scream queen Adrienne Barbeau) about his alcoholic father’s recent actions. Meanwhile a police officer (Tobin Bell (Jigsaw in the ‘Saw’ franchise)) and a doctor (Giancarlo Esposito (Gus Fring in ‘Breaking Bad’)) investigate the boy’s house during a storm. Nathan is a bit too jumpy as Timmy, but Barbeau, Bell, and Esposito help anchor things as the adults. Nicotero builds up the suspense quickly and some flashes of slimy makeup effects made me say “gross” out loud several times. “Gray Matter” is on the nose as a metaphor for alcoholism, but it’s still engaging enough and immediately sets the tone of the past films and the series to come. Grade: B

The second entry of the episode, “The House of the Head,” is similar in its clever tone while in other ways being completely different than “Gray Matter.” Whereas the first segment focuses on darkness and creature effects, “The House of the Head” is more interested in quiet tension and a young girl’s imagination. Written by Josh Malerman (author of the novel ‘Bird Box (2014)) and directed by John Harrison, the segment concerns young Evie (Cailey Fleming) and some unsettling things happening to her new dollhouse. Harrison expertly frames the going-ons with the dollhouse, keeping the audience on the edge as the setting and pieces of the house change in between looking at certain areas. Malerman allows Evie to run the gamut of emotions as a character while Fleming sells the situation entirely; it’s a very impressive bit of child acting. The wrap-up of “The House of Head” is a disappointing non-ending, but up until that point it is always solid and sometimes terrific. Grade: B+ 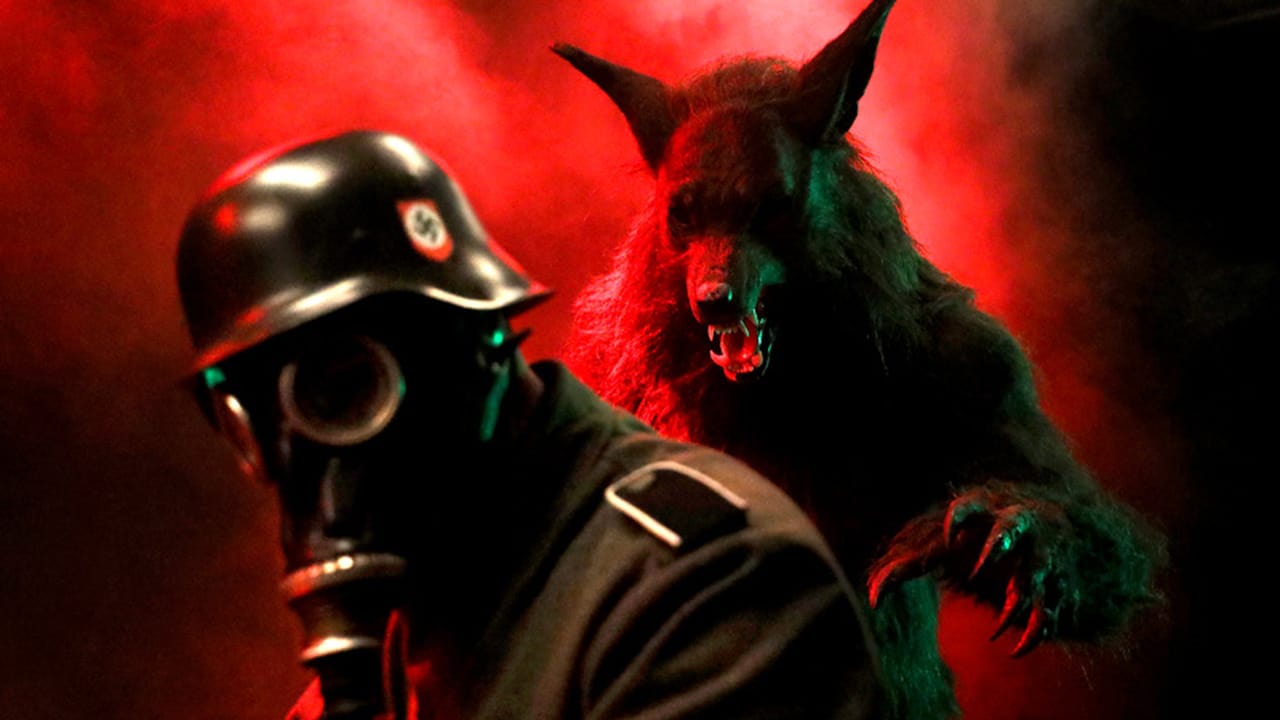 “Bad Wolf Down” is a fast-paced bit of cartoonish carnage set during WWII. Written and directed by Rob Schrab, the segment brings to mind Neil Marshall’s ‘Dog Soldiers’ (2002) as the plot involves soldiers, werewolves, and an isolated location. The American characters are all stock (hardened captain, smart medic, loud-mouthed jerk, wimpy young guy), but they have personalities and the actors bounce off of each other with ease. More fun is seeing Jeffrey Combs (Herbert West in ‘Re-Animator’ (1985)) as a vengeful Nazi leader. “Bad Wolf Down” is definitely for fans of the tongue-in-cheek gore side of ‘Creepshow,’ with it containing exaggerated lighting, multiple comic panel transitions, and lots of bloody action. Grade: B+

“The Finger,” written by veteran horror screenwriter David J. Schow and directed by Greg Nicotero, is a dark and sharp character study. It examines Clark Wilson (DJ Qualls, excellent here), a down-on-his-luck guy who likes to pick up “treasures” left on the streets. One day he picks up a strange finger and it soon grows into a Xenomorph-like creature. Instead of freaking out, Clark befriends the creature — and names it Bob — despite it showing deadly tendencies. Clark is a fascinating low-life, with the writing providing him narration and fourth wall-breaking opportunities while Qualls brings him to life with perfect timing on his looks and dialogue delivery. Bob, though cheap in design, is a cute and creepy little puppet effect. “The Finger” manages to be smart and even heartfelt while also delivering some shocking moments of brutality involving all sorts of body parts. Grade: A- 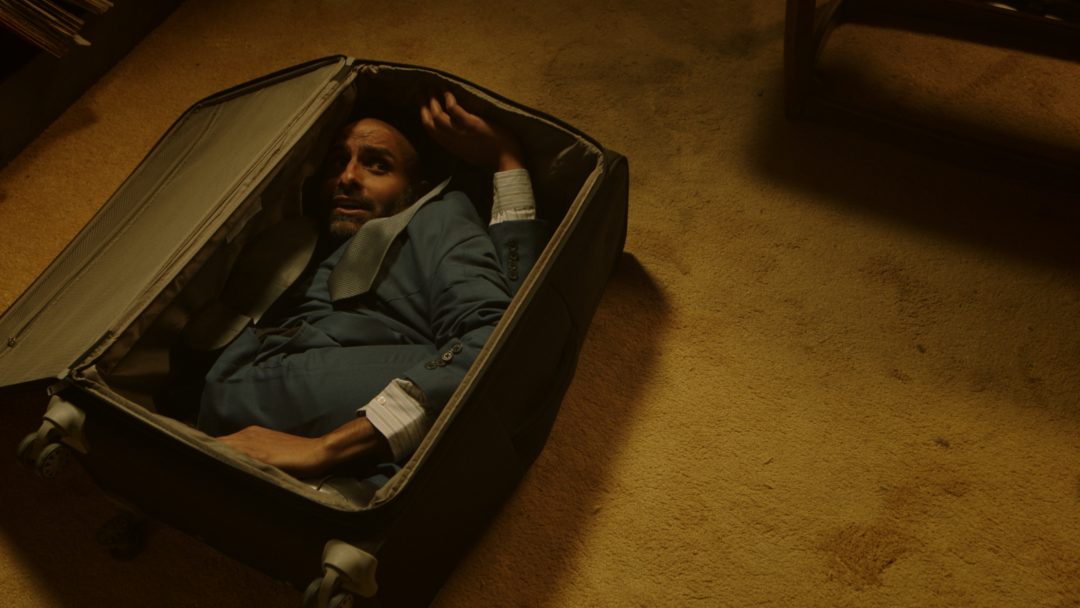 Episode 3 begins on a disappointing note with “All Hallows Eve,” directed by John Harrison. The segment takes place on Halloween and has some well-lit holiday atmosphere, but the story is ultimately dull and predictable. It follows a group of kids who trick-or-treat, with the adult homeowners being afraid of them for some reason. None of the actors make a strong impression and some of them give downright poor performances. This segment marks the biggest slump of the season. Grade: C

The episode improves with the second segment, “The Man in the Suitcase,” directed by David Bruckner of ‘The Ritual’ (2018) fame. The piece has a dark sense of humor as it explores greed as a young man named Justin (Will Kindrachuk) and his friends torture a guy stuck in a suitcase. Anytime the man is hurt he spits out gold coins. This oddball concept allows for some unexpected and amusing moments. Kindrachuk is occasionally bland in the lead, but Bruckner guides the actor and the rest of the cast well enough through the strange material. Grade: B- 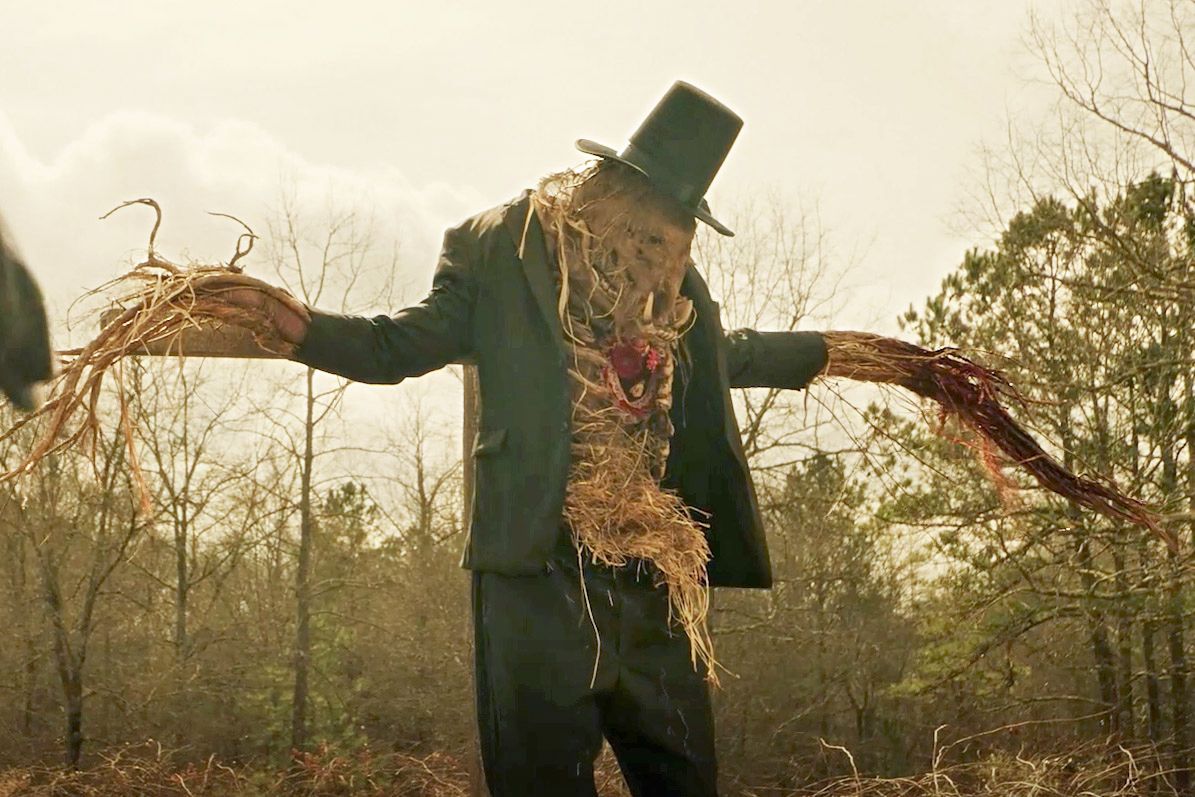 “The Companion,” the first segment of episode 4, deals with a boy named Harold (Logan Allen) being bullied by his older brother. Running from his brother, Harold happens upon a supernatural scarecrow. Director David Bruckner returns, giving “The Companion” a cool look and making the scarecrow a creepy creature. Unfortunately, “The Companion” is hampered by a mediocre performance from Allen and an exposition-heavy backstory on the scarecrow that sucks the momentum out of the whole thing. Bruckner aims to explore loneliness in the short, but the results feel uneven at best. Grade: B-

Much better in episode 4 is “Lydia Layne’s Better Half.” The plot deals with Lydia (Tricia Helfer) choosing someone else instead of her coworker and lover, Celia (Danielle Lyn), to be the next Chief Financial Officer of the company they work at. After a fight and an accident, Celia ends up dead. Lydia decides to do the wrong thing and dispose of the corpse, eventually getting trapped in an elevator when the power goes out. Roxanne Benjamin directs the piece with maximum tension while also finding the dark humor about corporate politics in the script by John Harrison; some subtle poignancy also manages to creep in. Benjamin is aided by Helfer and Lyn, who both turn in believable, finely-tuned performances. Grade: A- 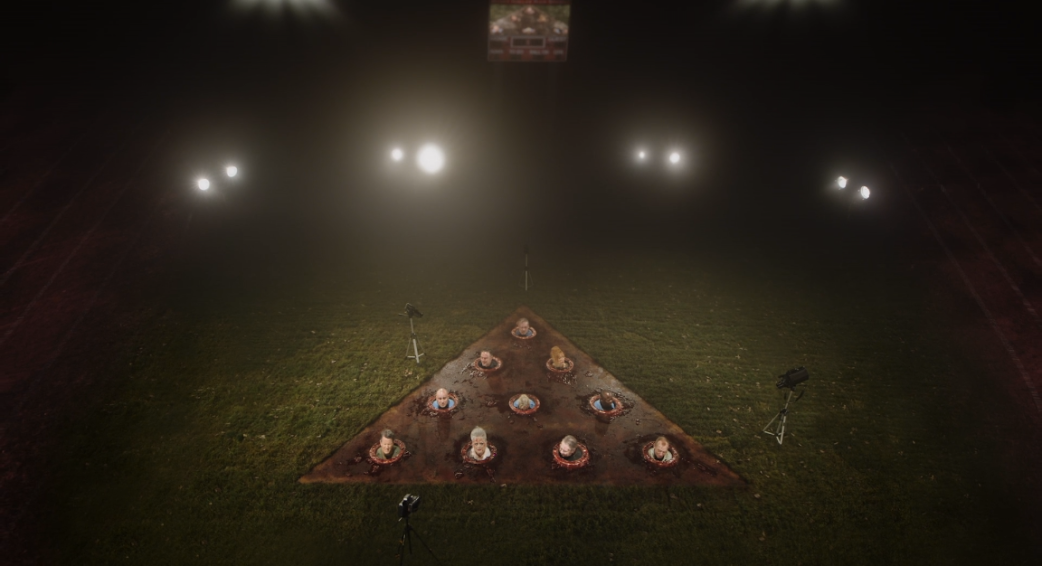 The opening short of episode 5 is “Night of the Paw,” a take on W.W. Jacob’s famous short story  “The Monkey’s Paw.” The plot focuses on an old man named Avery (Bruce Davison) telling a woman he saves, Angela (Hannah Barefoot), about a monkey’s paw he possesses. It allows him to have wishes granted, but of course this comes with a price. Directed by series regular John Harrison, ‘Night of the Paw” is a solid if unremarkable entry in the series. Davison anchors the whole thing as the grief-stricken Avery, while Barefoot is just okay as Angela. The segment has a great scene involving a zombie kissing someone, which is pulled off with some impressively disgusting effects. Another scene involving a morgue setting is fun too. Unfortunately between these moments is a lot of bland backstory filler. There’s also a scene with CGI fire that looks terribly fake and pulled me out of the whole thing for a minute. Grade: B

The second vignette of episode 5 is “Times is Tough in Musky Holler.” The John Esposito-helmed bit is about a group of individuals getting their due after taking advantage of a zombie outbreak situation. The segment feels rushed and relies on the comic panel effect as a crutch for unloading exposition too often. I never felt interested in the supposedly awful people at its center, including a cop played by the always-welcome David Arquette (of ‘Scream’ fame). The gore effects and game show idea presented in its second half are entertaining, but there is a serious lack of tension building to them. The zombies just sort of attack people’s faces quickly, which looks awesome… but that’s it. Esposito drops the ball in pacing this part, not allowing for suspense to build or conflict to arise between the victims facing their fate. Grade: C+ 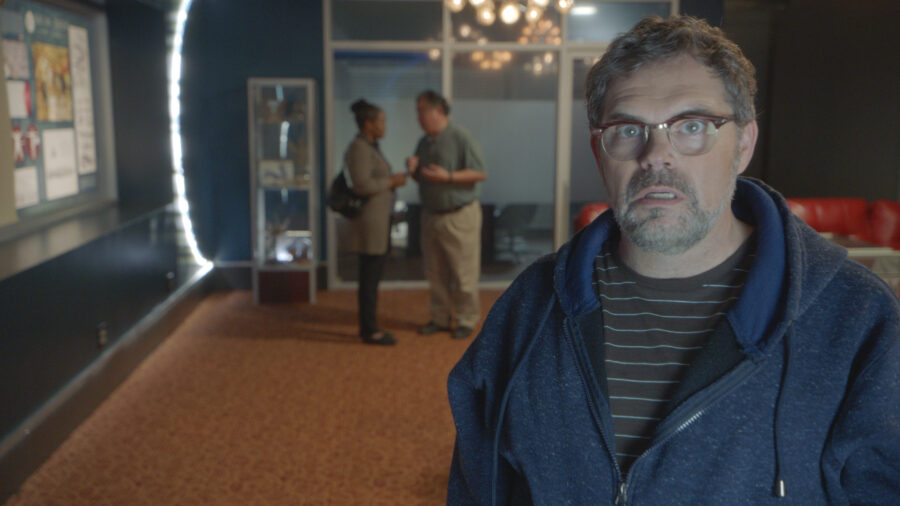 Episode 6 is the best episode of ‘Creepshow’ season 1, tied with episode 2. It starts off with “Skincrawlers,” a darkly hilarious satire on fat loss fads. Dr. Sloane (Chad Michael Collins) thinks he has found the ultimate fat loss treatment, using rare eel-like creatures to literally suck the fat out of people. He decides to do a demonstration on TV and of course things don’t go as planned. Director Roxanne Benjamin channels David Cronenberg’s body horror films here, with the climax of “Skincrawlers” becoming a wild and bloody affair. None of the segment is subtle, but it is consistently entertaining and insane in the directions it goes. Grade: A-

The final vignette of season 1 is “By the Silver Water of Lake Champlain,” based on a story by Joe Hill (Stephen King’s son) and directed by makeup effects legend Tom Savini. It’s the most emotional segment of the season, with a girl named Rose (Sydney Wease) believing in a lake creature called “Champy.” Her father died trying to find the same being. The exposition comes naturally in the bit, not feeling forced like in some of the lesser segments of the season. Savini guides it all with a sure hand, while Wease delivers a rich performance. Grade: B+

“Times is Tough in Musky Holler” in Episode 5 — C+

“By the Silver Water of Lake Champlain” in Episode 6 — B+

Grade for Season 1 of ‘Creepshow’ overall: B

Review: 'Creepshow' Season 1 by Daniel Rester Stephen King and George A. Romero are two of the most beloved names in the horror entertainment community, so it was a treat when they came together to make the film ‘Creepshow’ in 1982. K...
8.7
Average User Rating
2 votes
Please sign in to rate.
Genre:Anthonlogy, Horror