After an acclaimed run on Broadway, Aaron Sorkin’s adaptation of “To Kill a Mockingbird” lands in Los Angeles in its first National Tour.

Starring Richard Thomas (beloved ‘John Boy’ of “The Waltons” fame), the play alters the narrative of Harper Lee’s original book (and the resulting film adaptation) by putting the character of Atticus Finch front and center. Although much has been made of this (Harper Lee’s estate sued them for the liberties they took with the character), the fact that the character of Atticus’ young daughter Scout (here played by Melanie Moore) still narrates the story allowing her to pull focus. At the same time, her narration revolves around her father, which does make him the driving force of the story. 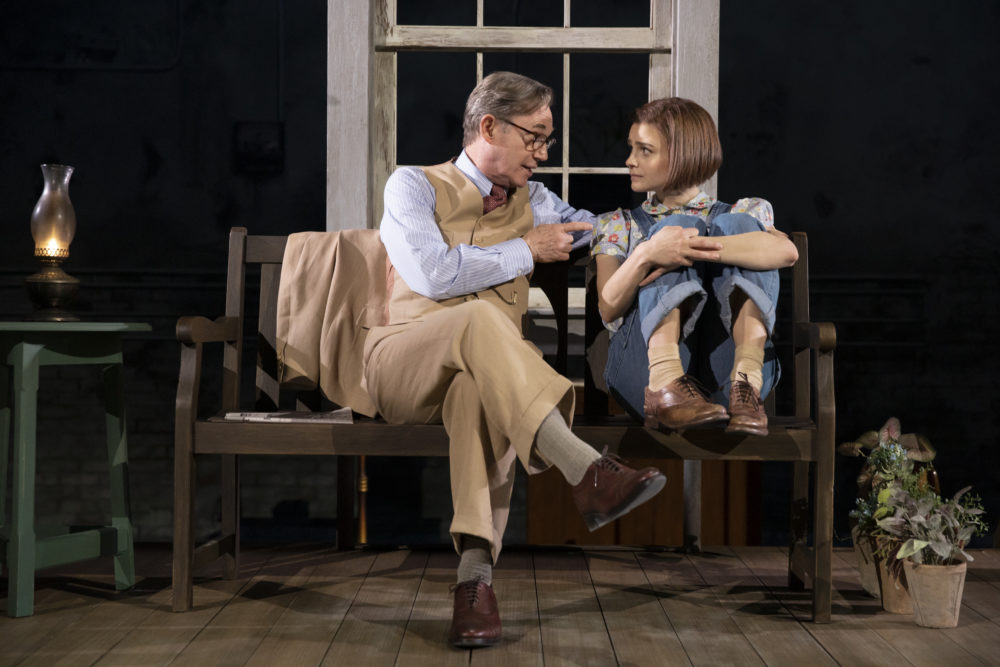 For those not familiar with the book or film starring Gregory Peck, the play follows lawyer Atticus Finch in the 1930s, who is defending a black man (Tom Robinson, played by Yaegel T. Welch) who has been falsely accused of rape by a white woman. The book was told from the perspective of Finch’s daughter Scout and how the case affected the town, her father, and ultimately caused her to learn more about the world than she ever wanted, both good and bad.

Sorkin’s play opens with Scout explaining to the audience the court case they are about to see. Throughout the show, she pops in and out, addressing the narrative and how it affects everyone around them, mostly her father.

While it’s understandable that a story that centered on a pre-teen tomboy would be challenging to stage, there is an emotional center that is missing from this adaptation. 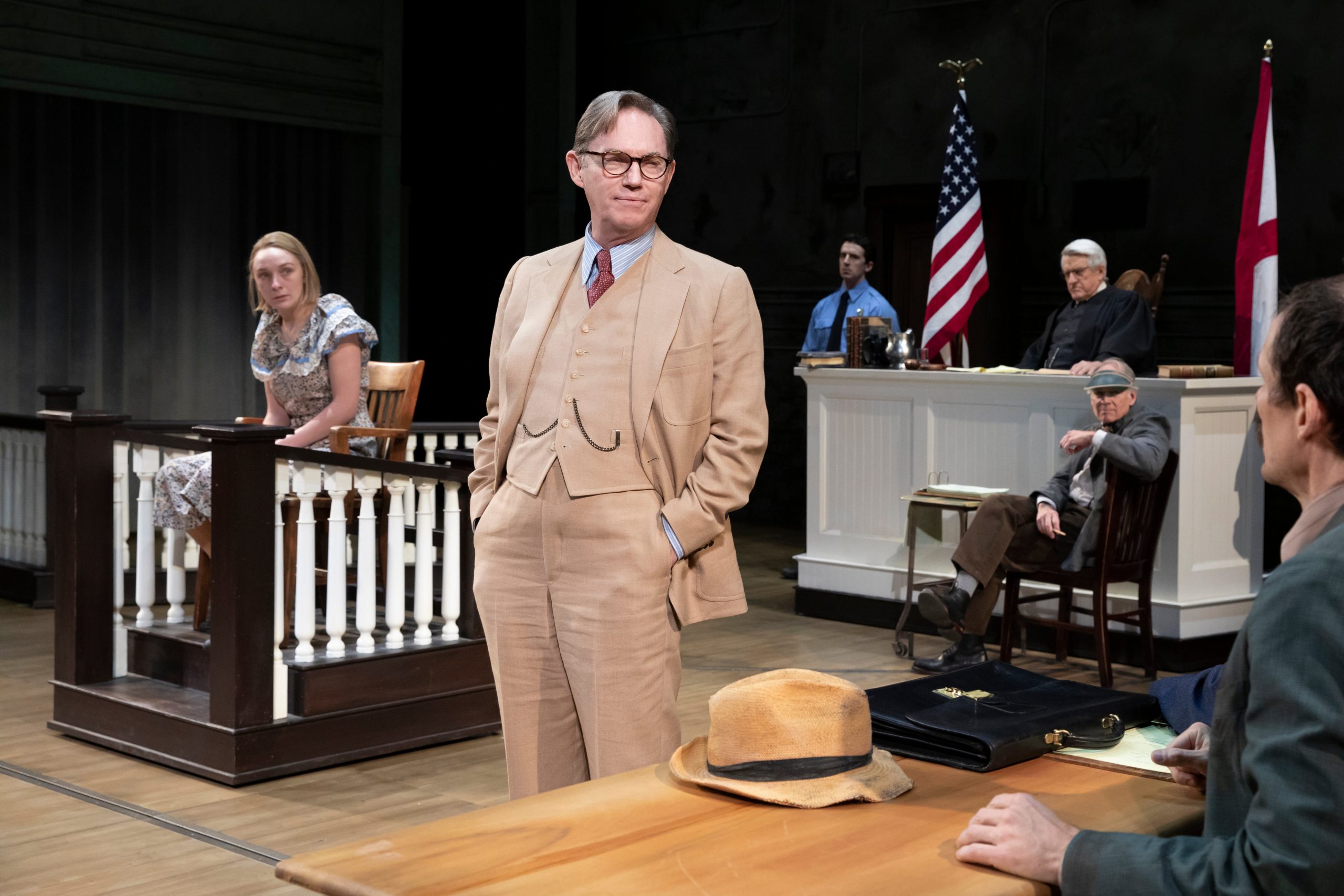 Aaron Sorkin’s script is typical of what he usually does, and that’s not necessarily bad. His dialogue (while overlong at times) is pointed, smart, and because he’s always been good at playing with the concepts of law, he focuses a lot on the court case.

The struggle I had with the show was that the structure seemed to be more random. The court case is front and center but then shifts to scenes from the past that have led up to it. Characters in the book come in and out too quickly, like their racist neighbor Mrs. Dubose (played by Mary Badham, who famously portrayed Scout in the film), and the reclusive Boo Radley (Travis Johns) isn’t given enough weight to make the dramatic payoff in the end land. While the repeated phrase “all rise” is knowing and timely, the play doesn’t leave an impact. The empathy that comes through so much in the book isn’t as strong in the stage version, and that’s the power and beauty of Lee’s story. 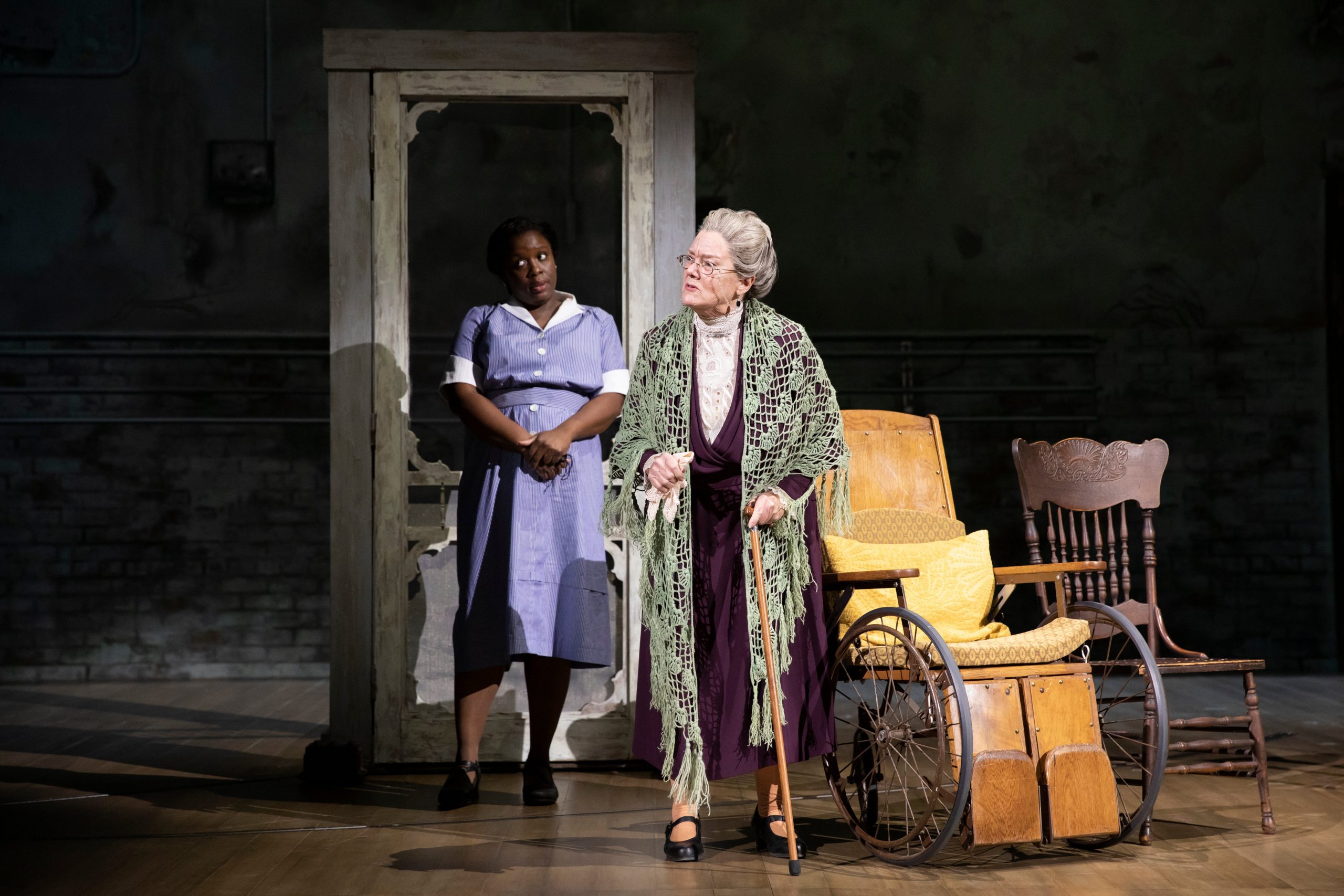 The actors here are all pretty splendid, with Thomas being the showiest. He makes a terrific Atticus, even when this character version is a bit more volatile. He has his stand-out moments in court and can allow a softer but firm side in his relation to his children.

Welch has some moving moments as Tom, making his performance one of the standouts. And while utilizing adult actors to play children wasn’t as disruptive as I expected it to be, it wasn’t totally effective either. Moore as Scout is engaging for sure, but you are constantly reminded the actor is a full-grown woman playing a 10-year-old kid. The same for the actors playing her brother Jem (Justin Mark) and their new friend Dill (Steven Lee Johson). The friendship of these three is the heart of the book, and here their relationship is shown in scattered pieces to allow Finch to take center stage. 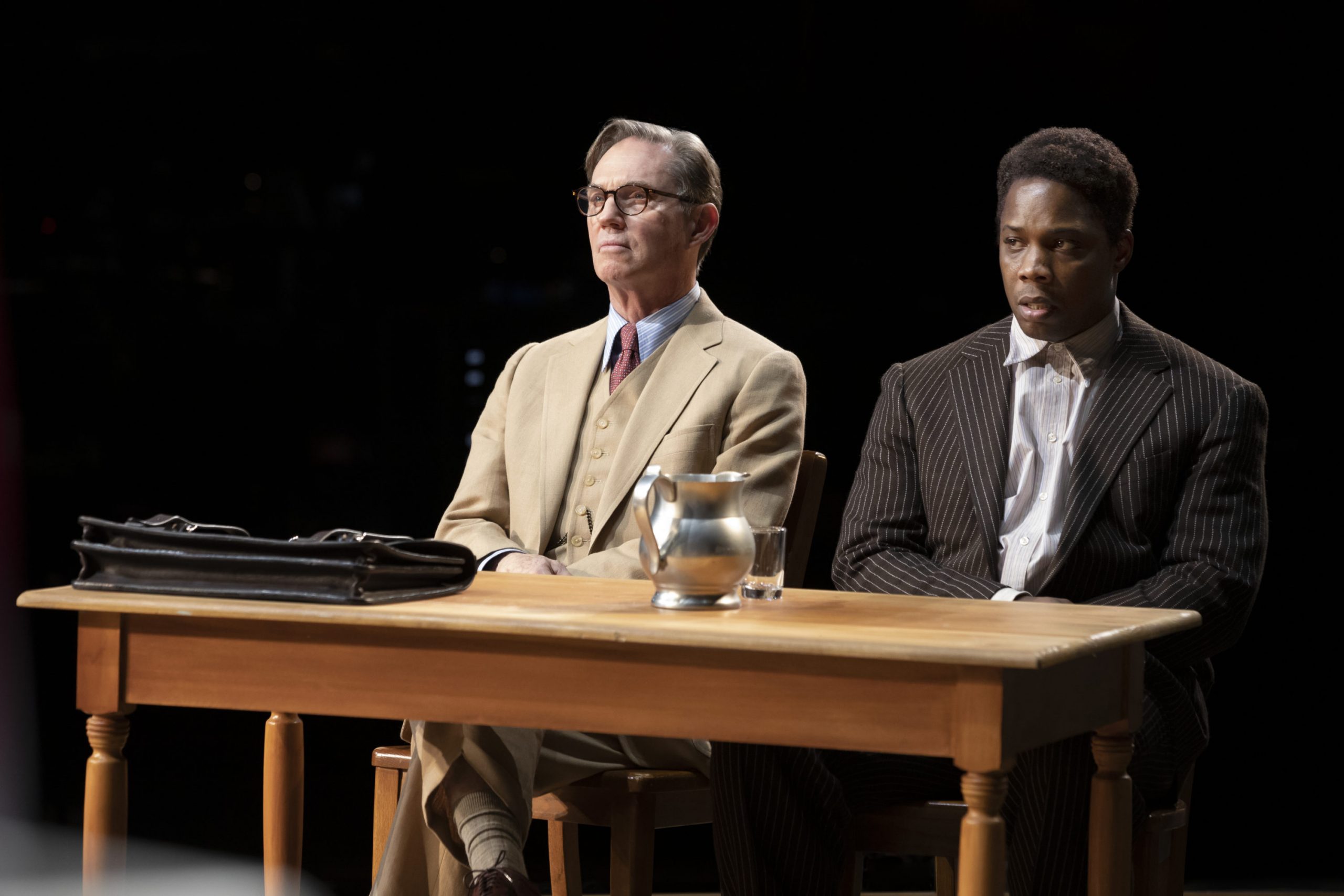 Speaking of the stage, while the set design looks lovely, it was distracting as it goes back and forth between Atticus’ front porch and the courtroom.

My final verdict is that I couldn’t help but be reminded of the power of Lee’s novel and even the now-classic film penned by Horton Foote. Watching Sorkin’s familiar banter and the shifted focus only made me want to go back and reread the book so I could feel that remarkable empathy and compassion that is the story’s forte.

Lee’s classic tale is always worth revisiting, and there’s nothing particularly wrong with Sorkin’s vision; it’s just not as powerful as the original.

To Kill a Mockingbird runs through November 27 at the Pantages Theatre, Hollywood, and from December 27, 2022 – January 8, 2023, at the Segerstrom Center for the Arts in Costa Mesa, CA.
For tickets, visit BroadwayinHollywood.com or Ticketmaster.com. 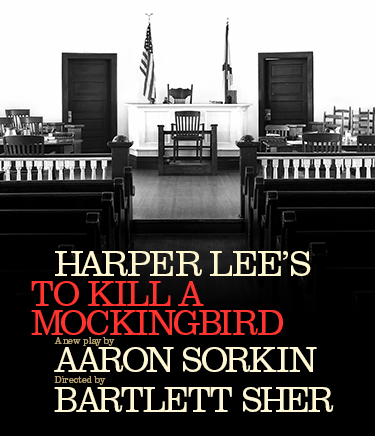 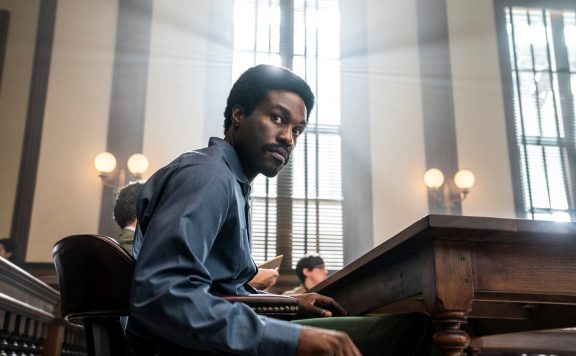 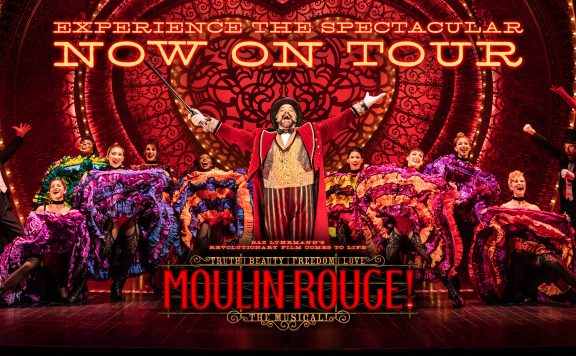 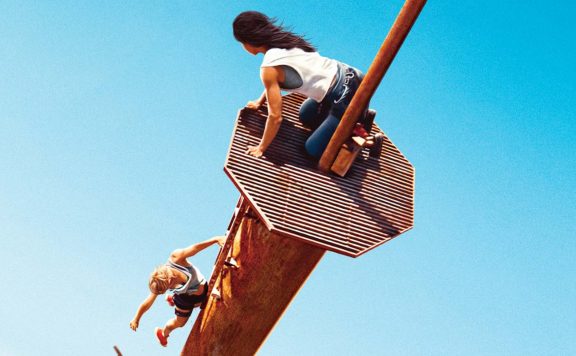 Theater Review: Sorkin’s ‘To Kill A Mockingbird’ Is an Uneven Interpretation 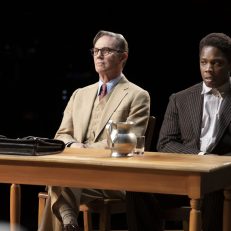 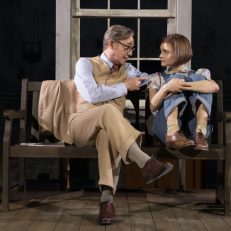 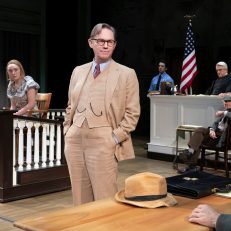 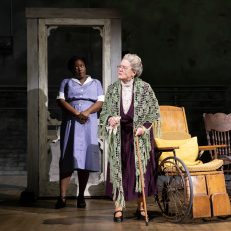