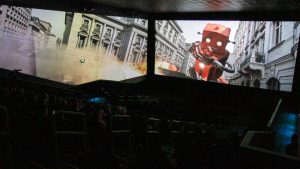 Last year I reviewed ScreenX, a movie format where the picture expands onto the walls of the theater. When I saw that Bohemian Rhapsody was playing in ScreenX, I thought that could be a cool effect to see the Wembley Stadium scenes envelop the theater. Sure enough, the first peek we get at the ScreenX effect is when Freddie Mercury (Rami Malek) first takes the stage in the prologue, but that is only the beginning of Bohemian Rhapsody’s use of ScreenX. (I’m a little surprised the Fox fanfare didn’t expand further.)

Our first real ScreenX moment is Queen’s first club gig. You see more of the crowd in the sides of the theater, including closeups of faces. That must be nice for some of those extras who didn’t quite make the center frame. There’s also more stake for Malek to won, although only his arms cross over to the sides. 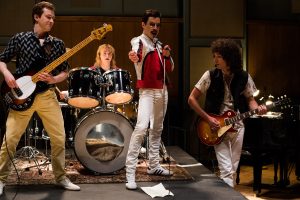 They even use ScreenX for the recording studio scenes. The sides shift from right to left when they’re mixing the audio. You see more of the technicians on the sides, and different instruments filling the studio.

Here, ScreenX also branches out so that the side screens are not just extending the center image. The side screens get in on the montage, showing different images than the center screen and intercutting back and forth.

Top of the Pops is another ScreenX scene and when all three screens go split screen, you end up with six frames in total. 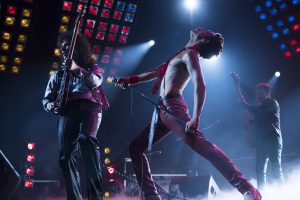 The US Tour and recording of A Night at the Opera also expand, and here is where you really start to see Malek and Gwilym Lee on the sides.

When all of Queen’s negative reviews flash on screen, they flash on the sides too. I didn’t notice any new quotes though. The same quotes used in the film repeat on the sides, but it’s still cool to be surrounded by bad reviews.

The first time Mercury throws a debaucherous party, it is not in ScreenX, but later when he’s in his solo downward spiral, those parties fill the sides. 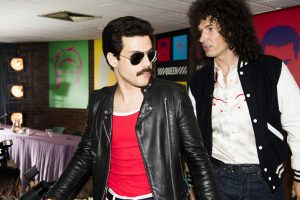 The “Another One Bites The Dust” gay club montage is an interesting use of ScreenX as the side screens alternate between Freddie’s private experimenting and the band playing.

The press conference flashes on the side screens contributing even more to the scene’s sensory assault. The “I Want to Break Free” music video also displays some imagery on the sides.

In the more montage-y uses of Screen X, I got the sense that images were repeating on either side. So don’t worry about trying to look back and forth. You’ll see all the images and have an equal experience wherever your focus is.

When Mary (Lucy Boynton) talks to Freddie in the rain, the rain envelops you on all sides.

When “Who Wants to Live Forever” plays, the side screens fill with Freddie’s memories. That is different than what the center screen shows, so there’s an example of ScreenX creating an entirely different effect for a scene.

They also use ScreenX when Freddie goes to the doctor for his diagnosis. It’s just hospital walls expanding, but adds to the sense of hopelessness and isolation.

But then we’re back at Wembley for the full Live Aid set and that is the big showcase for ScreenX. As the stadium crowd fills the side screens, you get both perspectives. You experience being in the audience looking at Queen on stage, and being on stage with Queen surrounded by a full Wembley stadium.

When it cuts to folks watching Live Aid at home, there are no side screens, but for the most part that’s a solid 10 minute climax of a movie in ScreenX. And then, the sides gradually roll to black at the end of the movie.

While The Battleship Island was a good introduction to ScreenX for me, Bohemian Rhapsody showed me how many different ways it can enhance a narrative film. I look forward to exploring other genres and other filmmakers in the format.

In L.A., the ScreenX theater is the CGV Cinemas, a Korean chain in Koreatown (most ScreenX theaters are in Asia). So Bohemian Rhapsody played with Korean subtitles, which don’t bother me at all because I watch Asian movies with English subtitles all the time, like The Battleship Island.

As American theaters adopt ScreenX I suspect subtitles won’t even be a factor depending on the areas. I only mention it as part of a full report of the experience in L.A. and the growth of a new format in different cinema communities. 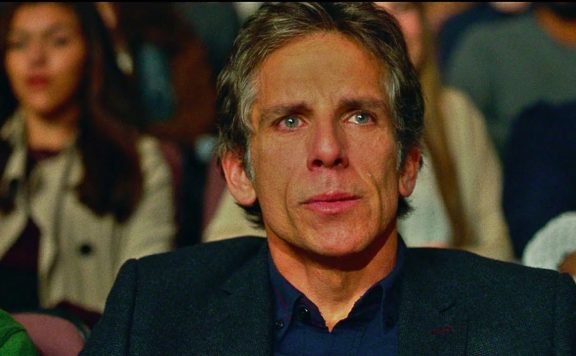