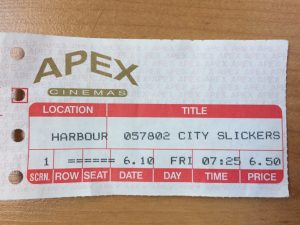 25 years ago today, A sequel to City Slickers opened. Three years before, City Slickers was a summer comedy phenomenon. Billy Crystal got right to work after he finished his passion project Mr. Saturday Night. When the sequel finally arrived, the world did not welcome the City Slickers back.

It opened only a little under the original but what really hurt it is that it didn’t do repeat business all summer the original. Speed beat City Slickers II on opening weekend and Speed did last the whole summer of 1994. 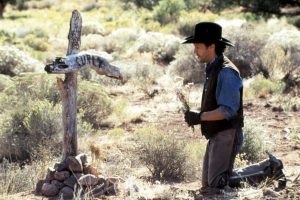 I was surprised City Slickers II was so reviled. It both got bad reviews and did poorly. It could’ve survived the Speed phenomenon if people liked it but they didn’t.

If you’re going to make a sequel to City Slickers I think this is how you further the characters and do another western comedy with meaningful resonance. 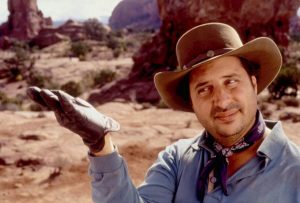 Mitch (Billy Crystal) got over his midlife crisis so you don’t want to do that again. Now he’s dealing with Curly’s death and grieving him. Bruno Kirby wasn’t going to come back because he hated the outdoor shoot but casting Jon Lovitz as Mitch’s brother Glen gave him an all new family conflict.

Jack Palance became a phenomenon but they killed off Curly so twin brother was really the only option. I think it also gives Mitch an emotional journey to accept that Duke is not Curly and he can’t replace him. 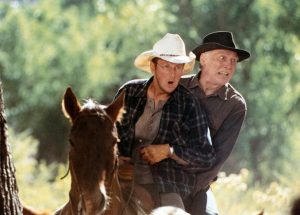 Phil (Daniel Stern) may be the one character who regressed, perhaps even further back than his arc in the first movie. I’ll allow it. Divorce is hard. You don’t get over it on one cattle drive, or even a year later. It didn’t Bonnie (Helen Slater) as most rebounds don’t.

They’re not just going to go on another cattle drive so how do you get them out into the west again? Treasure map works for me and it speaks to the weekend warriors that think they’re John Wayne after one cattle drive. 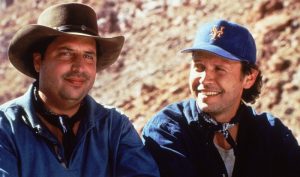 There are plenty of meaningful conversations on horseback. Mitch and Glen hash out their relationship. Mitch tries to help Phil. Mitch tries to get to know Duke through much resistance.

The callbacks to the first movie are fun. Mitch gets the exact same birthday phone call from his parents. “He’s behind me, isn’t he?” comes back. Norman is all grown up. Programming a VCR is still a vital issue in the ‘90s. Ira (David Paymer) and Barry (Josh Mostel) show up again. 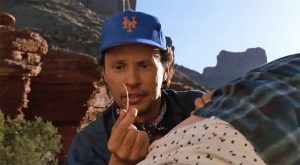 Maybe the comedy set pieces aren’t as organic this time. Phil sits on a cactus and they go through a whole spiel thinking he’s snake bit. Mitch rides with a wild stallion for no reason and ends up in a stampede. All right, I’lll give you that but ranch hands coming after Mitch and the boys seems plausible, and getting caught in a thunderstorm seems like something that could happen. 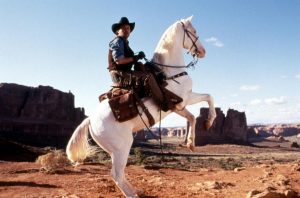 I accept that City Slickers was lightning in a bottle. You can’t just recapture that magic. City Slickers II really seemed to me like a sincere attempt to deliver something worthwhile for the fans. Maybe you didn’t find it funny or exciting but I don’t get it’s reputation as one of the worst sequels ever. The Legend Of Curly’s Gold replaced electric boogaloo as the punchline for a bad sequel title. It’s certainly no Blues Brothers II or Caddyshack II.

Maybe they shouldn’t have said what the one thing was. That should be left up to the viewer.

I like these characters and enjoy seeing more of them. I wish there’d been a City Slickers III: Tokyo Drift.