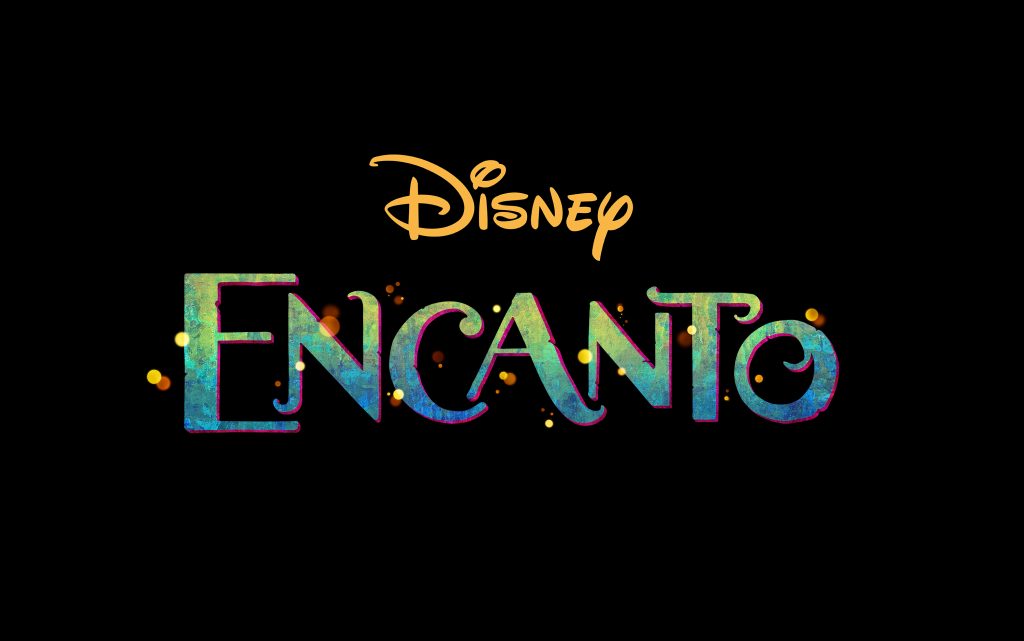 Earlier this month, the cast and creators of Walt Disney Animation Studio’s latest feature, Encanto, got together for a virtual press conference to discuss the inspirations for and the making of the film. Here are eleven things we learned from that gathering.

Before a single note or word was written, co-directors Byron Howard and Jared Bush took a trip to Colombia, and brought songwriter Lin Manuel Miranda along. Encanto is set in Colombia, so the creators wanted the film to feel as authentic as possible. In fact, the character of Pepa was written as a reflection of the country. Carolina Gaitán, who voices Pepa and was born in Villavicencio, Colombia, said, “I really love that about Pepa.  She is emotional, and she allows herself to be emotional. She’s always raining or thundering, and Colombia is like that.” Howard hopes their love for the country comes through in the film: “Colombia is a country that deserves to be known for the glory that it is, and [we are grateful] for the warmth that we’ve been shown throughout this whole process, and the partnership, and collaboration.”

Director Byron Howard got a little too close to Colombia during the trip: “We came back really, really charged up to get as much of Colombia into this film as we possibly could. It was incredible.  And I almost fell off a cliff.” No details were provided, but he lived to tell the tale.

The opening song, “Dos Oruguitas,” was written before there was even a second act. The music was driven by the characters themselves, which then made the characters stronger. It was also a way to keep track of everyone, according to Miranda: “I put points on the board and was like, ‘All right, here’s our opening number.  Here’s how everyone’s related, and what they can do.’  I wrote that opening number before we had a second act or a third act to our film, because we needed it for ourselves [LAUGH] to keep track of everybody.  And these names may change and the powers may change, but we know the audience is going to need a guide, and Mirabel’s going to be our guide, so let’s write that song early.”

The literal translation of Dos Oruguitas is “two little caterpillars.” Miranda wanted to use some of the visuals coming out of the animation department, which featured butterflies. “It was a nature metaphor that was already baked into the visuals of the film, but speaks so specifically to what this family is going through, in terms of trying to see each other more fully, and in terms of you have to change to get to the next level and you have to allow yourselves to change.”

The butterfly metaphor was also an homage to the style that inspires the film, as confirmed by co-director/co-writer Charise Castro Smith: “We were definitely very inspired by magical realism, by Gabrielle García Márquez and his books One Hundred Years of Solitude and Love in the Time of Cholera, and also Isabel Allende’s The House of the Spirits. The butterflies are absolutely an homage to [García Márquez].” Colombia happens to be home to 20% of the world’s butterflies. 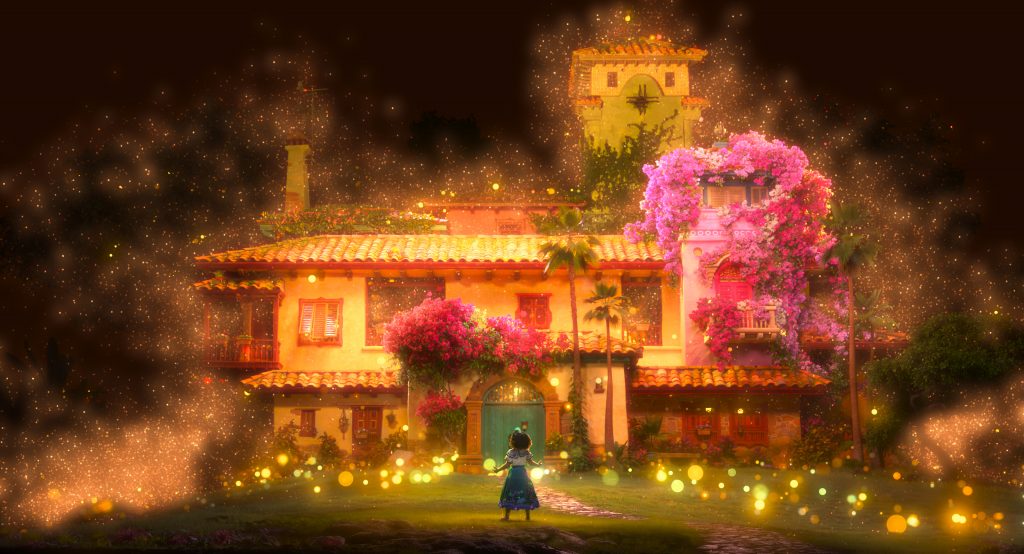 HOME SWEET HOME — The Madrigal’s casita in “Encanto” is more than a house—it’s alive—embodying the same magic that has blessed the Madrigal children for two generations. Filmmakers liken the house to a loyal pet—it is part of the family. The love for one another is mutual. Opening in the U.S. on Nov. 24, 2021, “Encanto” features songs by Lin-Manuel Miranda. © 2021 Disney. All Rights Reserved.

7. Butterflies are important, but the family dog was key, too.

Castro Smith revealed the inspiration behind the family house, a central location of the film: “As we’re trying to crack the character of this house, what was it going to be, how was it going to act, we really landed on the metaphor of this house behaving like the family dog.  It sort of has favorites.  It has different relationships with each person in the family. It is a beloved family member by everyone.  And it’s really also sort of a metric for how the family is doing, ultimately, throughout the movie.  It really is one of the most joyful, cool parts of this movie.  And the animators did just an incredible job with it.”

Most Disney animated films focus on one person, this one focuses on twelve equally. It was a challenge, but the challenge came at the most perfect time for the animation studio, as noted by Clark Spencer, President of Walt Disney Animation Studios and a producer on the film: “Encanto is our 60th animated film, starting with Snow White back in 1937. It’s pretty incredible to think, how do you reflect upon that, right?  And so, even though we never said to ourselves, ‘We’ve got to figure out how we have it feel like it has one foot in our history and one foot in the future,’ it does.” He also noted that Encanto is the most complex movie they’ve ever made, visually, which is a testament to how far they’ve come in those sixty years. 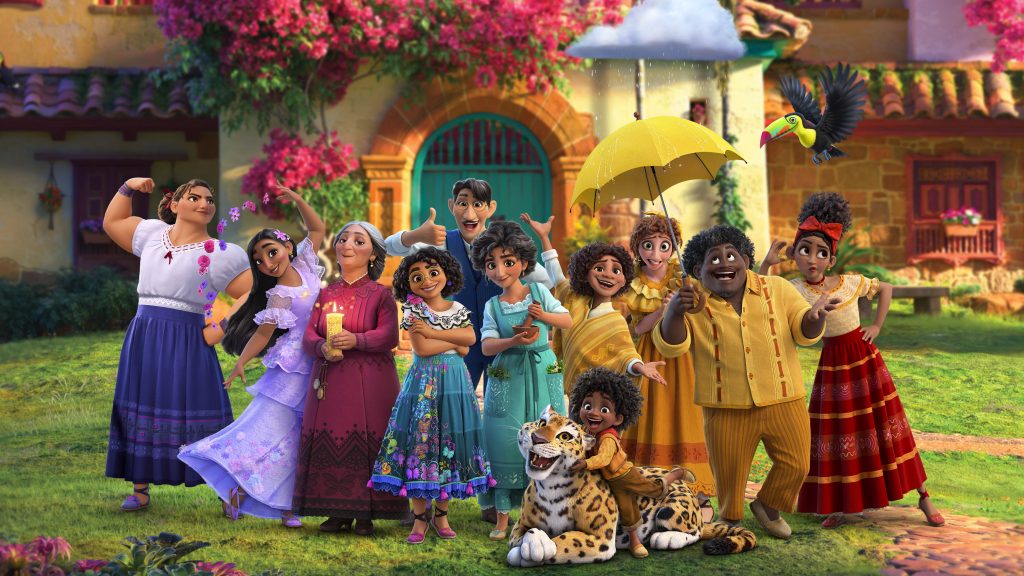 MEET THE MADRIGALS – Walt Disney Animation Studios’ “Encanto” introduces the Madrigals, a compelling and complicated extended family who live in a wondrous and charmed place in the mountains of Colombia. Opening in the U.S. on Nov. 24, 2021, “Encanto” features the voices of Stephanie Beatriz as the only ordinary child in the Madrigal family; María Cecilia Botero as Mirabel’s grandmother, Abuela Alma; Angie Cepeda and Wilmer Valderrama as Mirabel’s parents, Julieta and Agustín; Jessica Darrow and Diane Guererro as Mirabel’s sisters Luisa and Isabela; Carolina Gaitan and Mauro Castillo as Mirabel’s aunt and uncle, Pepa and Félix; and Adassa Candiani, Rhenzy Feliz and Ravi Cabot-Conyers as Mirabel’s cousins Dolores, Camilo and Antonio, respectively. © 2021 Disney. All Rights Reserved.

9. The actors all relate to their characters.

Each actor noted how much of themselves they put into their characters, especially since most of the actors have a Colombian heritage. John Leguizamo, who was born in Bogatá, Colombia, was emotional seeing characters who looked like him and his family on screen.  “A lot of us are Colombianos. And this is what Colombians look like. That’s how my family is in Colombia.  You know, everybody can be really mad dark, or light, with straight black hair, or super curly hair.  I mean, it looked like my family, it looked like the way I grew up.  And to see that, you just feel like, ‘Oh, my god, we’ve arrived.’  You know, we as Latinx people have finally arrived when there’s a Disney movie about you.”

Beatriz was eight and a half months pregnant during filming. Miranda confessed, “It was like, ‘We’ve really got to finish this song.  Like, we are on a real ticking clock.’” And it was not lost on him the curious coincidence of one of the songs he happened to write for her character: “The joy of Steph’s vocals on that tune, with her child sitting on her lungs while she has to hit these notes–the fact that she is singing ‘Waiting on a Miracle’ while she is literally waiting on a miracle, I will never forget that.”

The idea of a story of an extended family with three generations was there from the beginning. Miranda commented on how, even for being a Disney film, Encanto might just be the most on-brand film the studio has ever made: “I think it is the family-est family film that ever familied.” Clark noted that, not only was it important to show families, but to get across a very important message in the film: “We get to go on this incredible journey, and realize at the end of the day that our gifts aren’t related to our worth, that these are separate things, and we all have value, and we all bring something to our family, we bring something to this world, no matter who we are.  And I think that’s such a powerful and important message.”

Written by
Catherine Springer
Catherine is a shameless child of the ‘80s who discovered her passion for movies when she was 12 and has never looked back. As the daughter of an American diplomat, she spent the first 18 years of her life as an international nomad, but, when it came time to choose a college and set down roots, there was no other option than Los Angeles, a true industry town where movies touch and flavor everything. She wouldn’t be anywhere else. The only thing she loves as much as watching movies is writing about them. 15 years ago, she started her own movie blog, CathsFilmForum.com, which has been her pride and joy. Her reviews have been published in newspapers and movie reference guides and is currently a contributor to AwardsWatch.com. She is Rotten Tomatoes-approved and a proud member of The Gay and Lesbian Entertainment Critics Association, the Hollywood Critics Association, and the Online Association of Female Film Critics. And, although she loves sports, there is no better season than Oscar season. She owes everything to Tootsie for lighting the flame and to Premiere Magazine for keeping it lit. 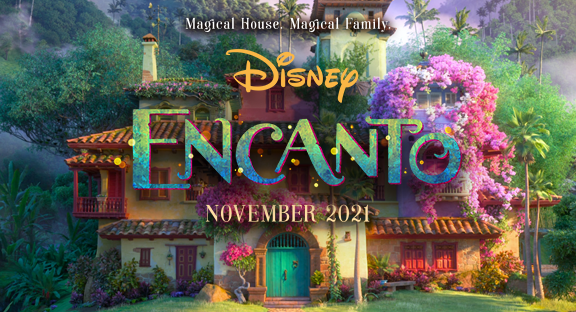 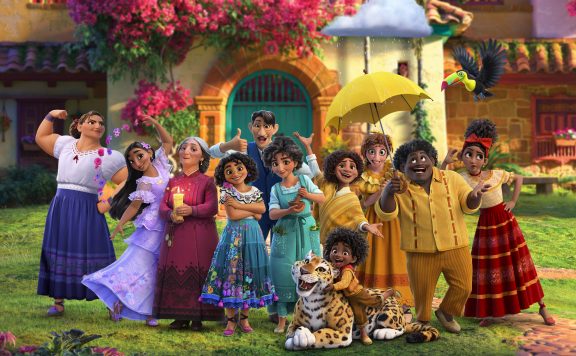 The Madrigals are an extraordinary family who live hidden in the mountains of Colombia in a charmed place called the Encanto. The magic of the Encanto has blessed every child in the family with a unique gift -- every child except Mirabel. However, she soon may be the Madrigals last hope when she discovers that the magic surrounding the Encanto is now in danger.
0
Average User Rating
0 votes
Please sign in to rate.
Film:Encanto
Cast:Angie Cepeda, Diane Guerrero, Jessica Darrow, John Leguizamo, Maria Cecilia Botero, Stephanie Beatriz, Wilmer Valderrama
Director(s):Byron Howard, Jared Bush
Genre:animation, Family, Musical
Studio(s):Walt Disney Studios
MPAA Rating:PG