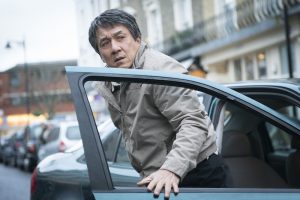 Jackie Chan as Quan in THE FOREIGNER

The Foreigner is an October action movie. It reminds me of the kind I would go see on a school night but wouldn’t give up a precious weekend for it. I’d most likely be working the weekend shift anyway because money is money, so The Foreigner could wait for a weeknight.

When Quan (Jackie Chan)’s daughter dies in an IRA bombing, he sees Deputy Minister Liam Hennessy (Pierce Brosnan) on the news and decides he’s the best person to demand the names of the bombers. I’m all for keeping the heat on bureaucrats to do their job but that seems like if it weren’t a movie there’d be no way that leads to anything productive. 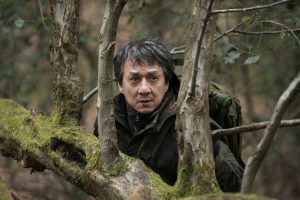 Jackie Chan as Quan in THE FOREIGNER

The Foreigner is half IRA thriller. The other half is divided into thirds. It’s 1/3 Taken (justice for his daughter), 1/3 Rambo (Quan has some skills in the woods) and 1/3 Jackie Chan action but serious. It’s a mess but it’s a competent mess. It looks like a movie and the action is clear. You can follow the bomb plot, thanks to plenty of exposition and identifying marks explained.

Quan keeps demanding names from Hennessy and other Irish agents. It begins to sound like “I want my two dollars.” Like, dude, how’s a desk jockey supposed to know the latest recruits of a terror cell? Hennessy is a reformed IRA terrorist himself but there’s gotta be a high turnover rate over there. Certainly the current IRA hasn’t kept in touch with old timers. 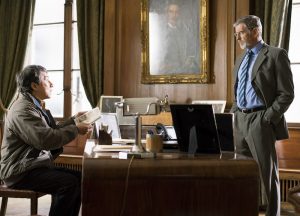 At times it is satisfying when Quan gets in Hennessy’s business. Hennessy thinks he can micromanage everything, even his wife, but he’s never faced someone who’s actually determined before. The plot has to bend over backwards to make sure Quan is justified. In several other movies, Quan would be the villain.

This is sort of what I expected latter year Jackie Chan to become. The fights are still good. He still uses the furniture, only not as a joke. It’s Crime Story/New Police Story Jackie where he cries and glowers to show he can be serious too. He can and he’s compelling but it doesn’t have to be either extreme. He can have gravitas in a dramatic action movie that doesn’t take itself so seriously.

It will be fine if Jackie Chan wants to make more dramatic movies but they’ll have to be good. His comedies can coast on ridiculous plots because they are so entertaining and unique. Hollywood genre movies are a dime a dozen so there’s no reason to watch a lousy one. At the very least, if The Foreigner didn’t take itself so seriously it could’ve had fun with this ludicrous premise.