Hala premiered at the 2019 Sundance Film Festival where I was lucky enough to see the film. Hala is a unique coming-of-age story that we don’t often see on the big screen. I remember walking out of the film and feeling like I learned something about Pakistani culture while I was watching it. Soon after its premiere at Sundance, Hala was acquired by Apple TV+ and was slated to be released on their new streaming service. I recently had a chance to sit down with writer/director Minhal Baig and star Geraldine Viswanathan to talk about the film as well as issues within the industry including the lack of stories from women and people of color.

Scott Menzel: Congratulations on the film. A very eyeopening movie. A movie that I feel was very personal, raw and real. This is a two-part question for you both. For you Minhal, how do you feel telling your story and unleashing it into the world? And then for you Geraldine, what were the difficulties of playing a role where the story was so closely linked to the filmmaker?

Minhal Baig: It was an act of vulnerability. It’s very scary to put something out in the world that is so drawn from my own life. But I very much wanted to make something that I wish I could have seen growing up. And the film was intended for young women who are unheard and misunderstood. The movie was an act of compassion and the goal was always to engage with people on a very emotional level and provide something for an audience that they can latch onto even in a highly specific story. It’s still a coming of age story that’s hopefully universal. But it was honestly a very difficult thing in the writing process, in the shooting process and then eventually in the editing process to watch the film and make it and realize there were parts of myself that are really exposed in the film. But I think that’s how so much great art is made is by putting yourself out there in a way and going toward the terrifying thing. So I think overall it’s terrifying, but I feel like the way that people have been responding to the movie has been very validating.

Geraldine Viswanathan: When I first read the script, it felt incredibly personal and very intimate and tender and it was so clear that this was so special and important and it was definitely intimidating. And I had never done anything like this before. My background is pretty much in comedies, so we really would dive into the deep end, but I just completely trusted Minhal and was really on it. So, you know, tell the story with her.

Scott Menzel: I run a critics group where we focus on different voices and elevating the voices of underrepresented people in the industry. And I was curious for both of you since you both have been very vocal about this on Twitter.

Scott Menzel: Do you feel like the industry is finally changing?

Minhal Baig: There’s progress being made for sure. I feel very indebted to the who came before me, who paved a path for filmmakers like myself to exist. There are so many wonderful female filmmakers that have reached out and have done so much good work. So I don’t feel like the first of anything. I feel like I’m coming in a long line of women who have made incredible movies and have paved the ground for us. And I do think that even though there’s greater awareness around having people share their stories and personal stories and having more inclusivity behind the screen, I do think that there is a demand that outpaces the supply. I do feel like there’s such a demand for these stories. There’s only so many of them that get made, get financing and get distributed. So, at each stage, there is a fall off.  And I feel like we, the business needs to support those voices and nurture them more and allow them to grow.

I think that’s something that we’re contending with now. It’s not just supporting a woman of color making our first movie, but hopefully supporting her as she makes her second and third. And if she wants to do episodic television or work in virtual reality, these are all things that we need to nurture in artists and support them even past their first feature.

Scott Menzel: What about you, Geraldine?

Geraldine Viswanathan: I mean really everything Minhal said. I mean yeah, as an actor I guess I’ve definitely noticed a difference in the last couple of years and it’s like a very exciting time to be in the industry and yeah, I think just with each example … I think we just need more films like this to succeed and to prove that it is profitable, the business and that it’s only beneficial and that they do … It works. And yeah, so I think it’s a really exciting time.

Minhal Baig: I’m hoping that they can find compassion for Hala and understand this internal struggle. I really feel like we do a disservice sometimes when we diminish the problems that young women go through and we trivialize their experiences. And in this movie, I really try to give space for this character to go on this journey and for us to really be along the ride with her even if she’s not always making the choices that we agree with. Because I do think young women are the future, they are at the forefront of all things in terms of environmental activism and politics in changing a culture. I feel like young women have taken the lead in all of these things and it’s really critical that we understand and embrace the coming of age story of a young woman. The heroine’s journey is just as valid and valuable as the hero’s journey.

Scott Menzel: This is one of the first films to be released on Apple’s new streaming service. There’s been so much talk and I’m not going to bring up the whole Martin Scorsese question going around because I just don’t care, but I’m curious about your own thoughts on being part of a new service like this? Is it an exciting time? Is it a new stage in filmmaking and storytelling? What’s your take on streaming services in general?

Minhal Baig: There are two sides to this. I think filmmakers make movies to be experienced on the big screen and to go to theaters and have a communal shared experience. And that’s something that I really value and I go to the theaters and I watch movies, but I also feel that it’s really important with distribution for access. And I think what’s really great about Apple TV+ is that this movie will be available in over 100 countries, and that’s a really special thing, a really special release and a bigger platform than a film like this would usually get. And I think that’s kind of amazing. The most important thing for me is for people to be able to watch the film and the format they want to watch it. And so we are having a limited theatrical release followed by a streaming release.

The stories are the most important thing. The platforms, whether it’s in theaters or streaming is secondary. We have had a problem of access before of people not being able to see movies or not being able to afford movies. And I do think streaming opens up just film going and going and watching the movies and watching films inside of your own home as a culture. And I think that that outweighs the cons for me. I really do feel that streaming has opened up a lot of avenues for underrepresented voices and for stories to be shared that would otherwise not get made. And that I think is very emotional for me. I really value that. Thank you so much.

Scott Menzel: Well, it was great chatting with you both today. Thank you so much for your time.

Hala is now available Apple TV+ and can be found in select theaters. 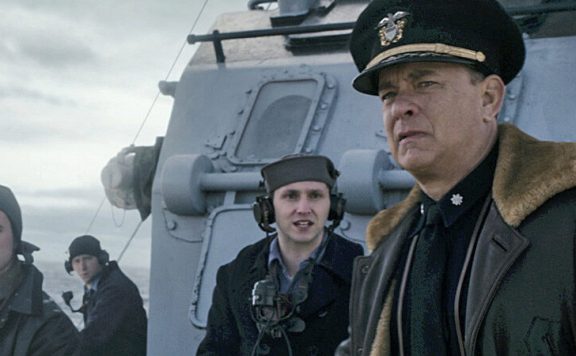