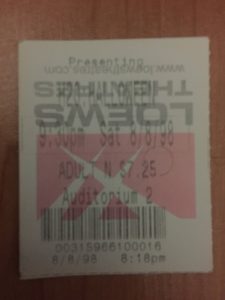 Loews was printing upside down in ’98. 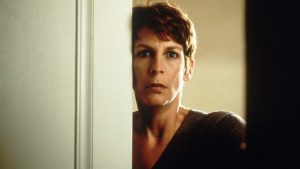 Laurie Strode (Curtis) defeated Michael Meyers (Chris Durand in this film), twice, but she still lives with it. She still sees visions of Michael everywhere, so when he really comes back she just thinks she’s still having visions at first.

By 1998 Curtis was a powerful screen presence to portray this kind of PTSD. Her coping mechanisms like day drinking felt real and the kind of maturity you don’t often get in slasher sequels.

She returned to the Halloween franchise, which launched her career, as a movie star. She’d starred in summer blockbusters like True Lies and classic comedies like Trading Places and A Fish Called Wanda. This was no longer the new discovery paying her dues in a horror movie. She returned with a purpose and the sequel was her idea. 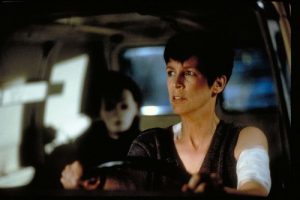 So when Laurie decides to go back and fight Michael, I still get chills. This is the monster that’s haunted her life, and who defined Curtis’s career and they both take charge of it. This is how sequels benefit from the history of the franchise, and the time that’s passed. You don’t even have to have seen Halloween or Halloween II to feel the magnitude of Laurie taking the initiative in this confrontation. 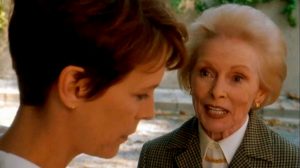 But back to H20, this is Laurie’s story. In most horror franchises the killer is the star. Michael Meyers certainly has star power but this is a rare one where you’re really invested in the final girl, not just because of her role as final girl (three times over by this point), but because of who she is.

The slashers who came after Meyers had more personality. Jason didn’t talk but got more outrageous. Freddy got funny and Chucky always was. Michael’s whole deal was really to be death incarnate with no real personality, and that’s effective. He gets a bit more subtle personality In H20. He’s taunting Laurie when he could just come right for her. He also lets the mother at the rest stop go because he just needed her car. That shows thought and motivation. He’s not just killing for killing’s sake. 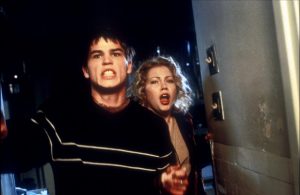 There are still plenty of kills when Michael gets loose in the prep school. H20 is also a great “before they were stars” movie to spot young Josh Hartnett, Michelle Williams and Jodi Lyn O’Keefe and Joseph Gordon-Levitt. Williams, O’Keefe and Gordon-Levitt were already on TV shows, so it was a bit of ‘90s “just fill the cast with people we know” mentality, but they’ve all gone on to notable careers outside those ‘90s shows since.

So this year’s Halloween can present Laurie’s final confrontation with Michael all over again. Maybe it’ll be even better. Either way, this is why I love franchises. I’ll always love H20’s final showdown and Laurie’s triumphant battle with PTSD. No amount of retconning or exploitive sequels can take that away.