There was always going to be a tricky line to walk with The Many Saints of Newark. Making a prequel film to The Sopranos, one of the most acclaimed TV series of all time, means trying to show an audience something that feels familiar yet new. Fortunately, creator David Chase is smart enough to put together a story that contains some of the standard mob movie beats expected by an audience while finding ways to bring out the internal drama in these characters. As a result, The Many Saints of Newark is not without many clear references to be picked up on by fans, but it still serves as a distinct cinematic take on some of TV’s most notorious gangsters.

Fittingly narrated by Michael Imperioli as his character, Christopher Moltisanti, the film primarily follows Chris’ father, Dickie Moltisanti (Alessandro Nivola). Set during the 60s and 70s in Newark, New Jersey, Dickie is just one of several key players in the DiMeo crime family. Tensions begin to boil over as the Italian-American and Black communities find themselves at odds with each other. And in the midst of all of this, young Anthony Soprano (Michael Gandolfini, son of the late James Gandolfini) sees what kind of man his uncle is and begins to form ideas for what he wants to do with his life.

Right off the bat, while the first hour is set in 1967, where the Newark riots are relied on as a fitting backdrop, the second hour is set in 1971 and features Gandolfini’s incredibly accurate performance. It’s eerie how much the young actor looks like his father and how clear he is in communicating many of the same mannerisms and other affectations. However, the film wisely leaves little Tony on the outskirts of most of the film. Some key scenes show his relationship with Dickie and the very important relationship with his mother (played to hilarious perfection by Vera Farmiga sporting a fake nose), but this is not the film’s focus. 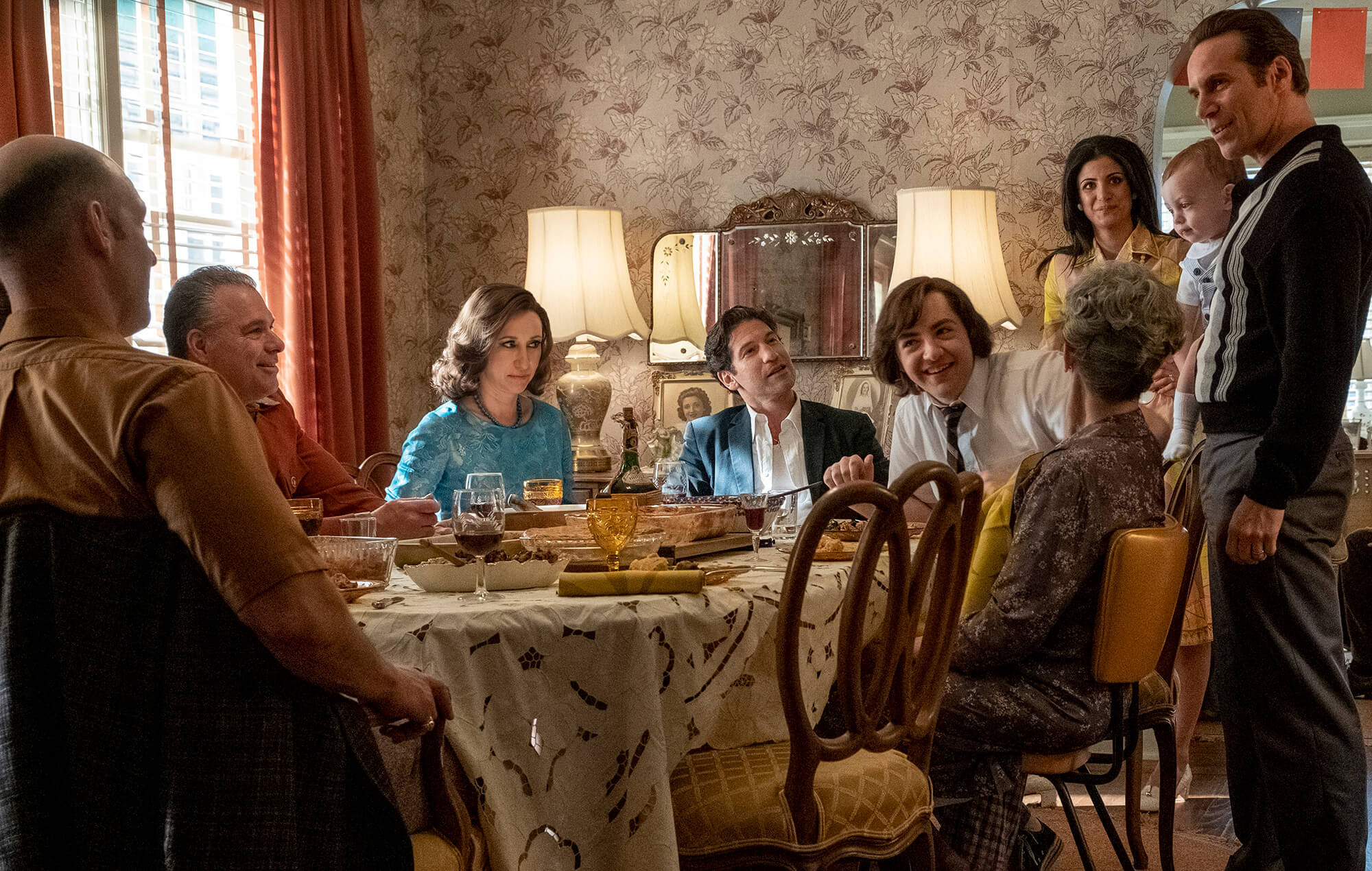 Instead, Dickie leads us through a lot of what occurs, and the film has many visualized versions of stories any fan of the show may recall. With that in mind, the film introduces new characters and aspects of the past that fans were not aware of. In saying all of this, it is important to note whether or not this film necessitates full knowledge of the award-winning TV series.

This is where credit goes to Chase and co-writer Lawrence Konner, who are well aware that it was essential to write a film that tells its own story. Director Alan Taylor (who directed a good portion of the series’ final season) may get a bit too cute now and again with how he stages certain scenes and allows some younger versions of popular characters to shine in ways that feel familiar. Still, the film is far more than just a collection of easter eggs. It’s a mob story, but it retains the elements that were so key to The Sopranos’ success.

Playing into tropes of the mafia, The Many Saints of Newark delivers on violent murders, frequent gatherings at funerals, family meals, and all the swearing you could ask for. At the same time, true to the spirit of the show, the gangster element is still handled in a fairly nondescript way. The Sopranos was about many things, but a key factor was getting to the core of these people beyond the flashy excess of being in the mafia. Focusing on the business side of things was never the most compelling aspect, not when Tony Soprano was battling his instincts for the sake of having private therapy sessions to deal with his panic attacks. 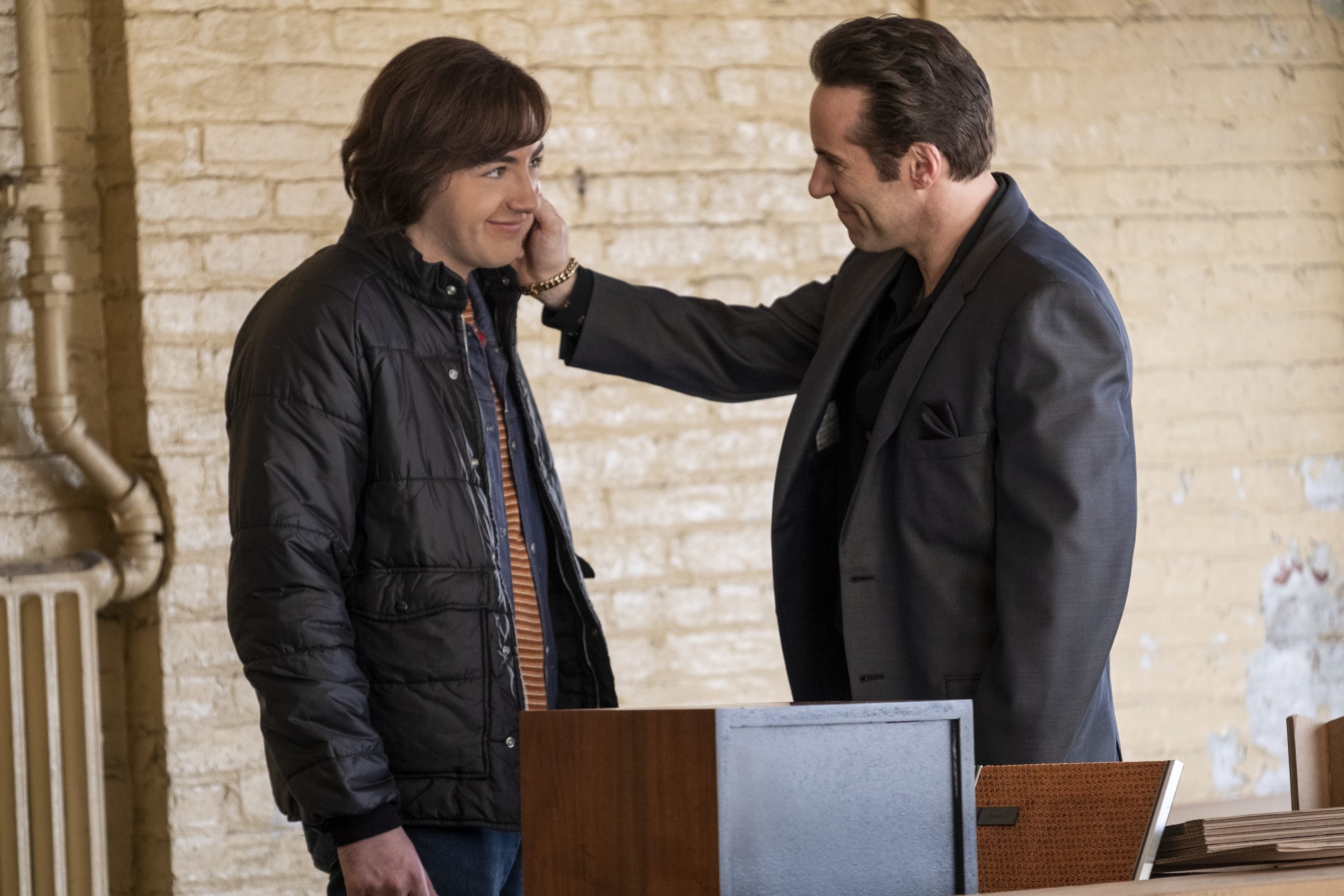 This film merely has two hours, however, so it has to juggle a lot of different characters, finding a core storyline to explore, and adding certain realizations that can inform the fans of the series without alienating casual viewers. This is why it’s fortunate to have a strong cast.

Nivola is excellent as Dickie. He’s the sort of man who perceives himself to be good, given the way he cares for others, and wants to serve as a fine mentor to young Tony. However, he’s also short-tempered with violent tendencies, leading him to hurt people close to him within an instant. Regardless of what may be known about his character going in, having the chance to explore the kind of person this is, without pushing him to be wholly likable, goes a long way in adding to Dickie’s complexity.

Others deliver what’s needed as well, notably Leslie Odom Jr. as Harold McBrayer. Harold is a man who starts as a runner for Dickie, only to find himself pursuing bigger dreams using dangerous methods. This is one of those fresh areas the film is choosing to explore. Given the proximity to today’s protests, it is interesting to see Chase placing this character in the story and finding ways to add wrinkles through a crime family’s relationship to this ambitious black man. Fortunately, Odom brings a lot of intensity in a way that reminded me of a younger Denzel Washington. 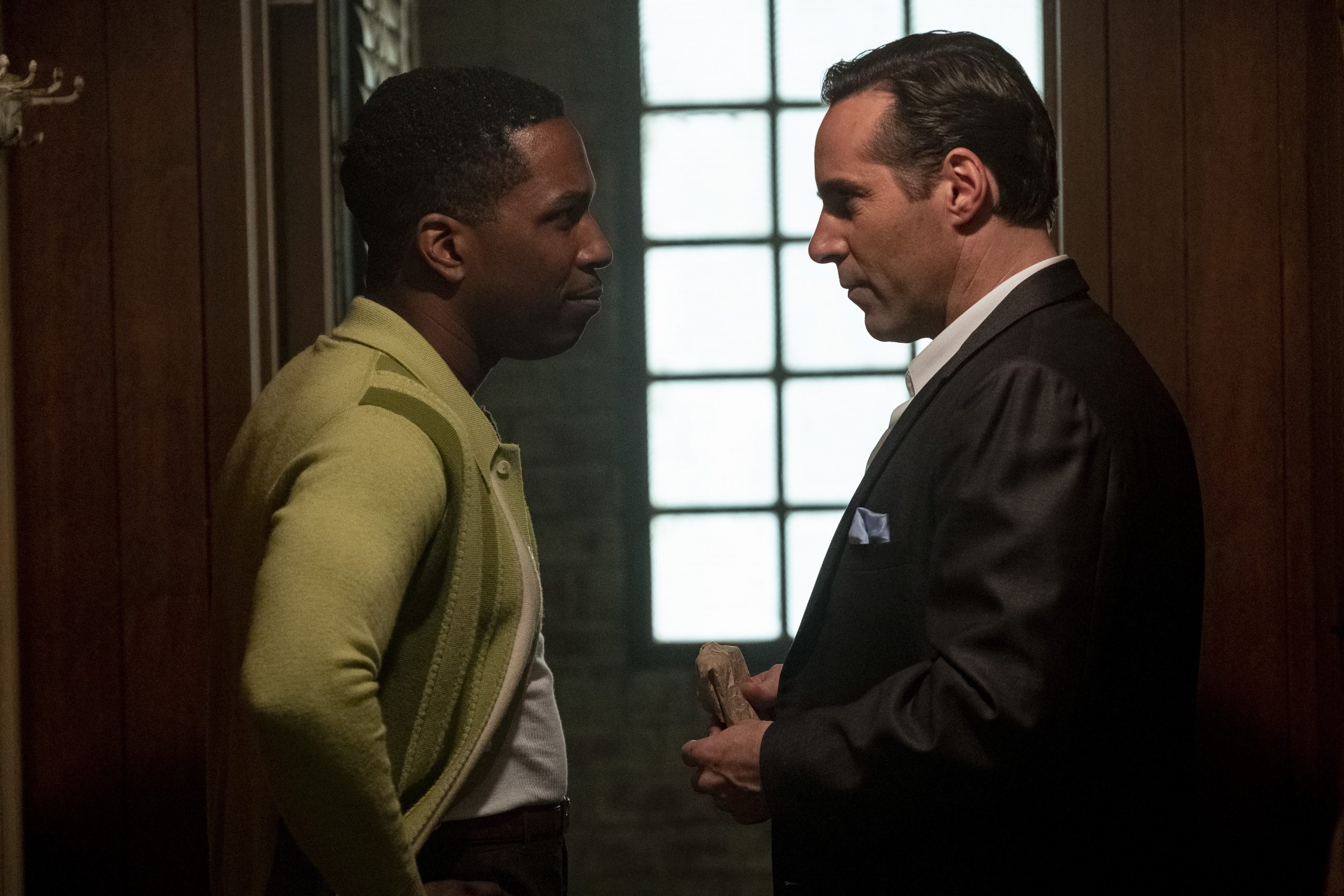 Elsewhere, the cast is rounded out by John Bernthal as Johnny Boy Soprano, Tony’s father; Corey Stoll as Corrado “Junior” Soprano, Tony’s wise yet insecure uncle, and Ray Liotta as twins “Hollywood Dick” and Sal Moltisanti, Dickie’s father and uncle. Liotta is another new addition to the world of The Sopranos, and he eats up the opportunity to portray both characters, one far brasher than the other.

Less successful are the younger portrayals of Tony’s crew, with Billy Magnussen as Paulie Walnuts and John Magaro as Silvio Dante, among others. It’s not that these actors are bad, but their presence felt more or less distracting, as I did wonder where this was all going. While there’s a strong core narrative reliant on evolving certain characters and delivering on a particular theme, having the presence of so many familiar faces made me wonder if this is designed to be set up for more or just the film finding ways to have fun in its design.

Struggling to see a greater purpose in all of this is what ultimately may hold The Many Saints of Newark back. It’s hard to recreate the magic of The Sopranos. While this film does a lot of good work feeling like something that could stand on its own for any audience, there’s a lingering feeling that for all the good that’s done with the key performances, the production, and more, there’s either something else we’re being set up for, or we’ll simply be left hanging. Whatever the case, looking at the film purely as a way to be reunited with a particular vision (or introduced to it), I was happy to take another spin off of the New Jersey turnpike.

The Many Saints of Newark opens in theaters and on HBO Max on October 1, 2021. 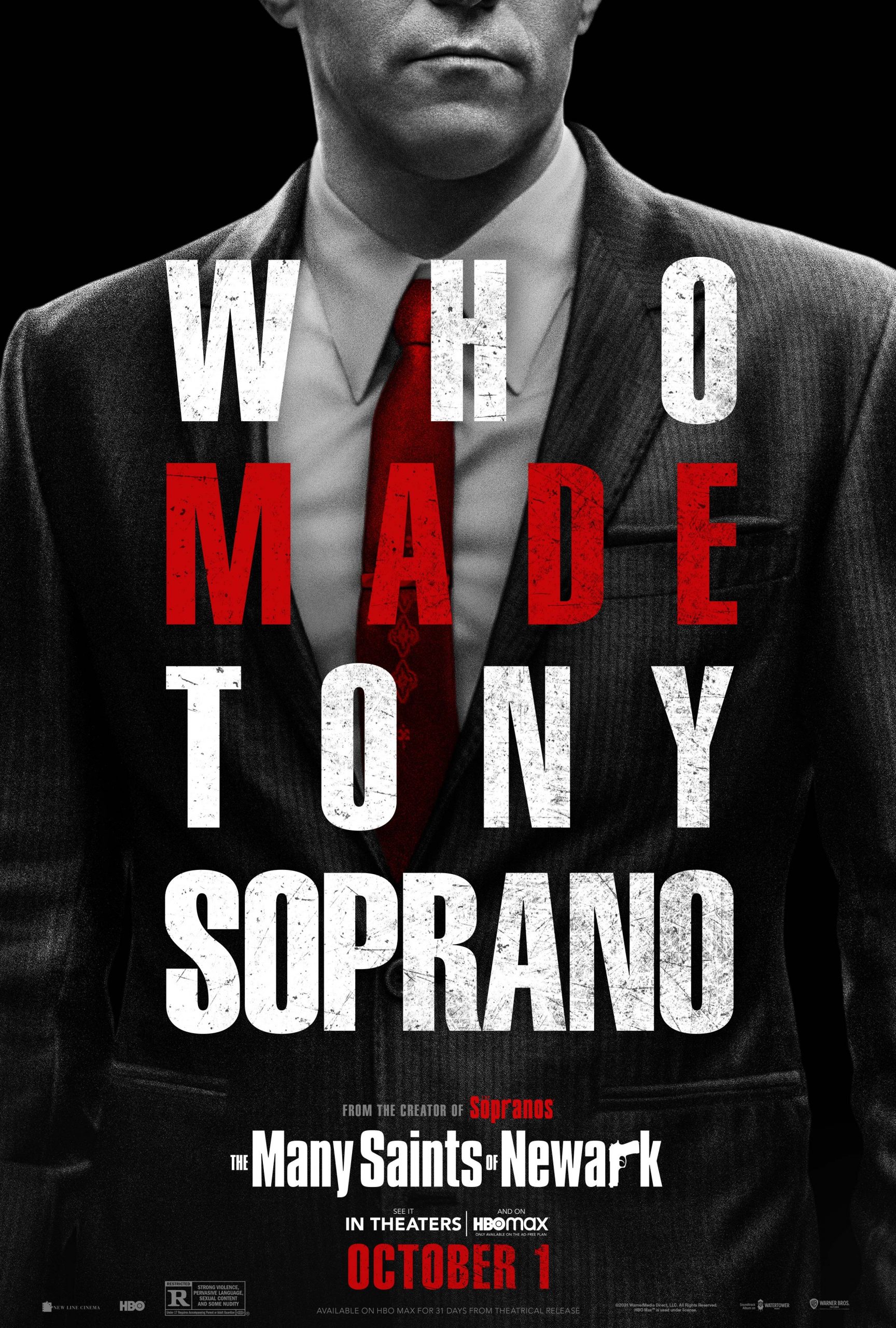 ‘The Many Saints Of Newark’ Review: A Hit Is A Hit

Young Anthony Soprano is growing up in one of the most tumultuous eras in Newark's history, becoming a man just as rival gangsters begin to rise up and challenge the all-powerful DiMeo crime family's hold over the increasingly race-torn city. Caught up in the changing times is the uncle he idolizes, Dickie Moltisanti, who struggles to manage both his professional and personal responsibilities and whose influence over his nephew will help make the impressionable teenager into the all-powerful mob boss we'll later come to know: Tony Soprano.
0
Average User Rating
0 votes
Please sign in to rate.
Film:The Many Saints of Newark
Cast:Alessandro Nivola, Billy Magnussen, Corey Stoll, John Magaro, Jon Bernthal, LESLIE ODOM JR., Michael Gandolfini, Ray Liotta, Vera Farmiga
Director(s):Alan Taylor
Writer(s):David Chase, Lawrence Konner
Genre:Crime Drama
Studio(s):Warner Bros. Pictures
MPAA Rating:R 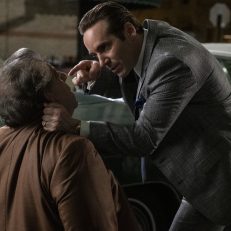 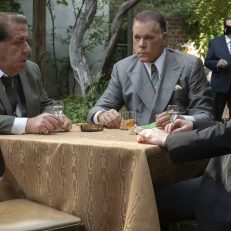 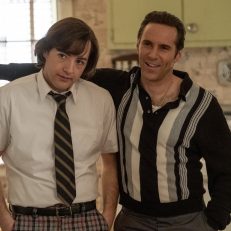 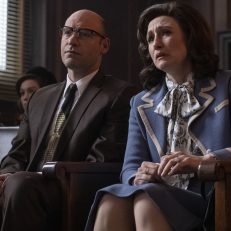 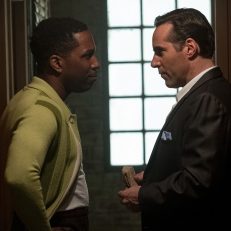 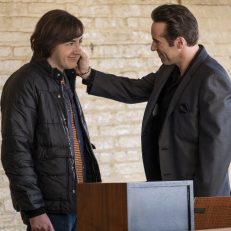 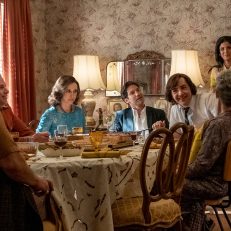 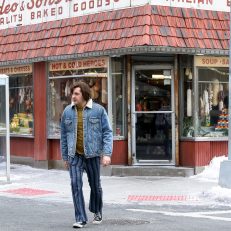