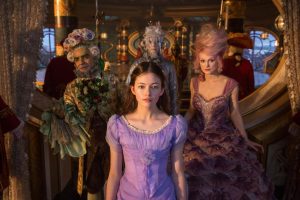 Disney’s latest live-action fairy tale is not based on one of their own animated films, but on The Nutcracker. The short story has been adapted into a ballet, so why not a big budget visual effects movies?

It begins with a dead mother, so that’s already very Disney. Clara (Mackenzie Foy)’s father (Matthew Macfadyen) fulfills his wife’s dying wish by giving their three children one last gift from her on Christmas Eve. 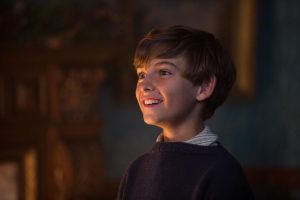 “My mom died and all I got was this lousy nutcracker that didn’t even come to life for me.”

Clara’s gift leads her to a magical realm where her mother used to be Queen, but now the fourth realm is at war with the other three. Her brother Fritz (Tom Sweet) gets a toy and her sister Louise (Ellie Bamber) gets a dress. Those gifts look like socks and underwear compared to Clara’s magical adventure. Clara’s also comes with a note that says, “Everything you need is inside” so you can see where this is going. 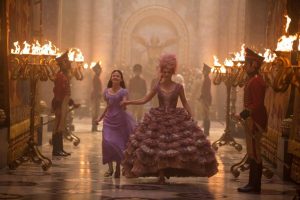 This setup is basically an excuse to string together a series of visual effects set pieces. Your mileage may vary depending on how much you like the set pieces. Some scenes look like they happen on real sets, like the forest or some of the interiors. Others are very obviously green screen, like tapestry adorned hallways or clock gear rooms. But, maybe you like the hyperactive clowns or the life sized mechanical nutcracker soldiers. They didn’t do anything for me but I don’t mind if you enjoyed them. 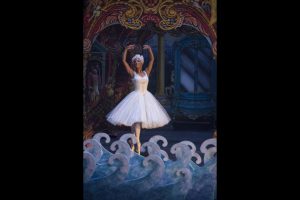 The ballet first peeps into the score when Clara and her family arrive at a Christmas ball. Other famous melodies show up later, but none more so than when the entire film stops for Clara to watch an expositional ballet about how the four realms got divided. 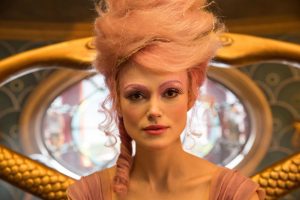 Foy is strong and empowered. I wish she were in a better vehicle for it. As Sugar Plum, queen of the sweets realm, Keira Knightley’s falsetto was too much for me. Again, your mileage may vary. It’s a choice and she stuck with it. 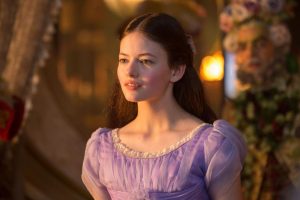 My greatest takeaway from The Nutcracker and the Four Realms is that Fritz and Louise are going to feel really cheated that their gifts didn’t lead them to rule magical kingdoms too. I want to see the movie where they hear about Clara’s adventure and go, “WTF, mom?” Or maybe they’ll hear Clara’s story and go, “That’s just a string of set pieces. I’ll take my dress, thank you very much.”